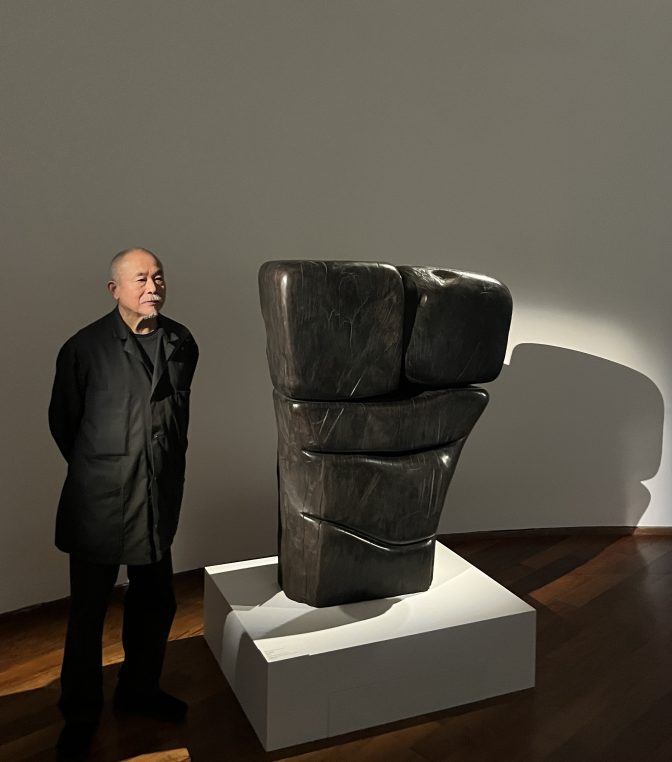 Musée Guimet is always a mysterious and exotic place to visit on place d’Iéna but it has particularly great news at the moment. The new president as of November 1, Yannick Lintz, former head of the Islamic department at the Louvre, just inaugurated there the Uzbek oasis exhibition which she curated. She introduced Wang Keping, the Chinese sculptor who has lived in Paris since 1984, and is showing in the 4th floor rotunda, a new series of mahogany statues as well as a group of works in the galleries of the museum. He was assisted by his brilliant daughter and studio manager, Aline Wang and his gallerist Nathalie Obadia co-organised the exhibition. Downstairs, “Afghanistan, Shadows ad legends” shows photographs and sculptures from the museum’s collections. And “Sur le Fil” (on the thread is a tribute to Zarif design, an association of Afghan women weavers who still maintain their couture house in Kabul.

END_OF_DOCUMENT_TOKEN_TO_BE_REPLACED 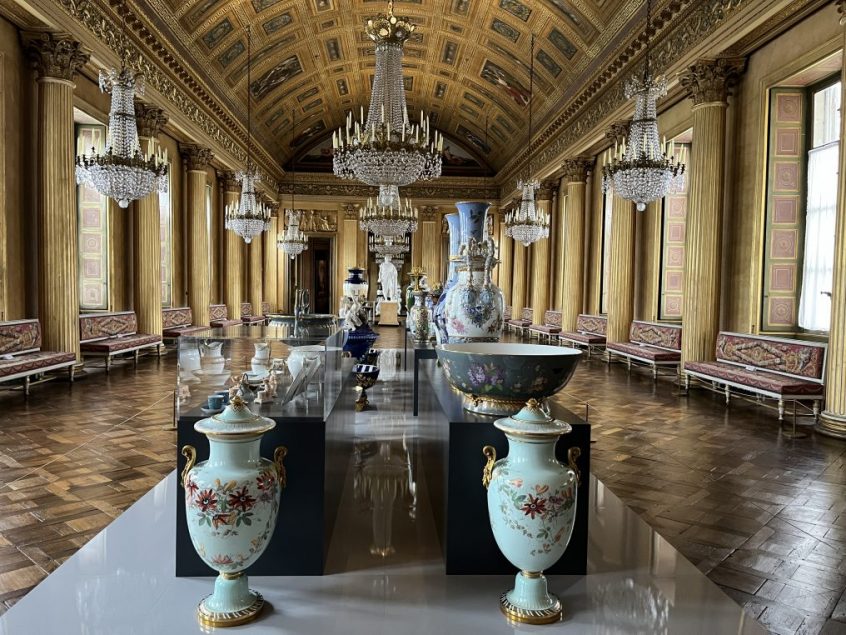 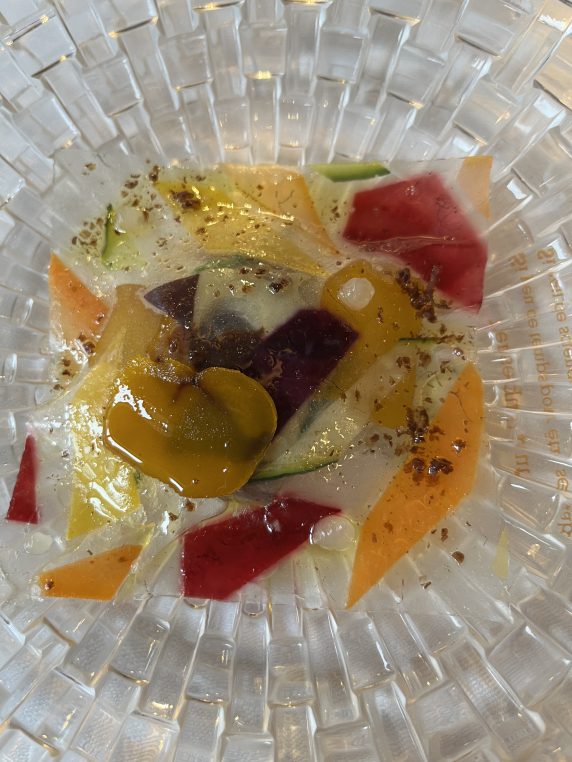 “Le vitrail”, the stained glass window, a tribute to the nearby Abbatiale of Saint Jean-aux-Bois at Auberge A la Bonne Idée

If you are looking for a Sunday visit outside of Paris, Château de Compiègne is a little known destination. Favorite hunting estate of Louis XV th and Louis XVI th, then of the court of Napoleon I and III, it holds beautiful apartments which are being progressively refurbished. At the moment, an exhibition of large vases and Sèvres plates is the occasion to rediscover fabulous china in the Imperial apartments. And to reward you for the very special cultural effort, an outstanding restaurant “A la Bonne Idée” awaits you in Saint Jean-aux-Bois, fifteen minutes away. There, the red mullet on langoustine chips and green sherbet with parsley, coriander verbena and mint will remain forever in our mind… The succession of  six plates was light and entertaining and we had fun discovering new flavors from the woods. END_OF_DOCUMENT_TOKEN_TO_BE_REPLACED 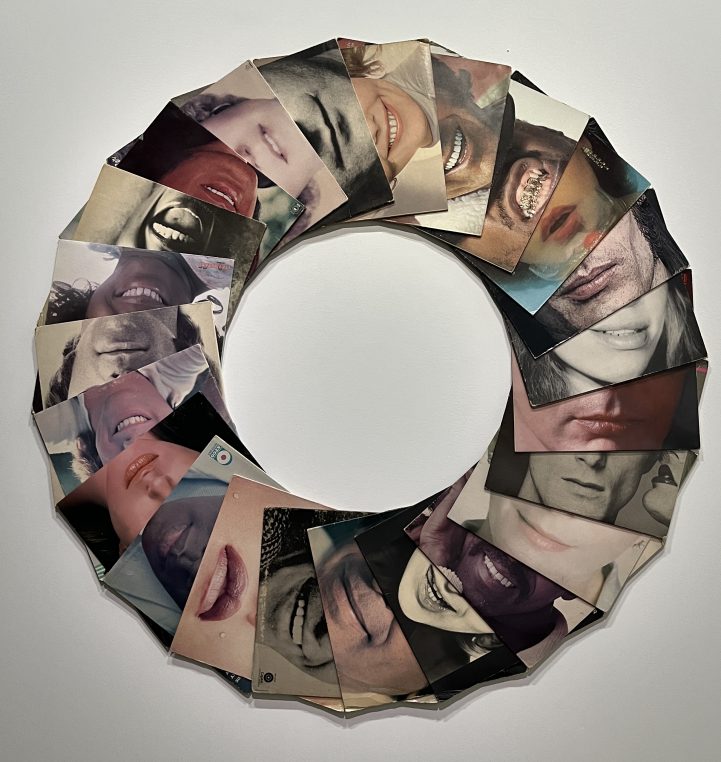 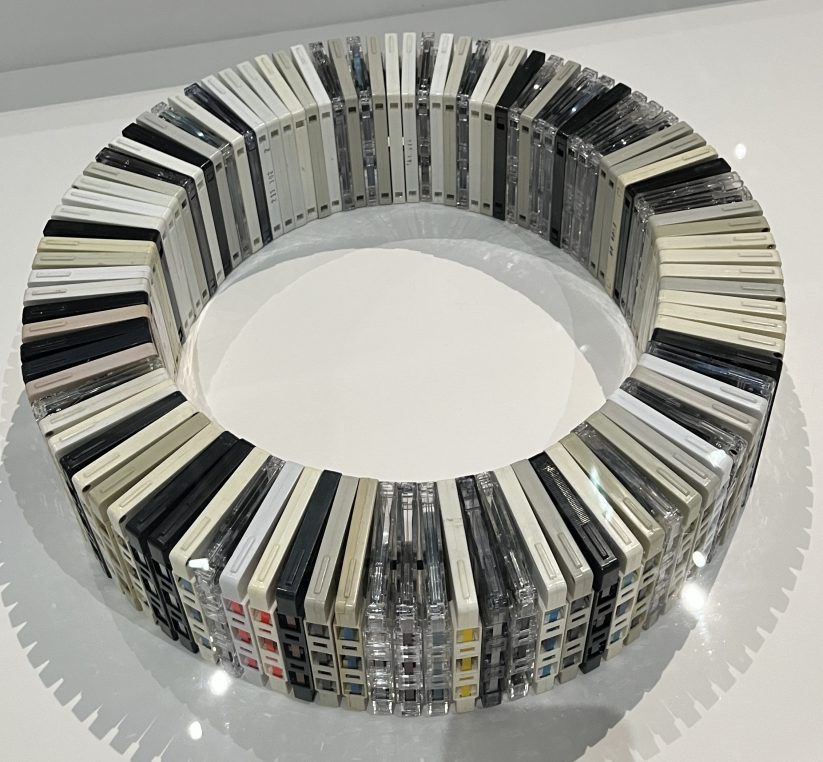 The greatest surprise of the week was for many art and music lovers, the Christian Marclay exhibition at Centre Pompidou which includes 40 years of work with 12 videos, assemblages and photographs. I had no idea about this musician’s talent until the curator, Jean Pierre Criqui, started telling us the story of the American/Swiss artist who uses turntables to make music and creates multiple visuals, stitching them together. He does not play an instrument but composes visual musical scores. The last paintings in the exhibition are explicitly musical with a series of “Screams” inspired by Edvard Munch. END_OF_DOCUMENT_TOKEN_TO_BE_REPLACED 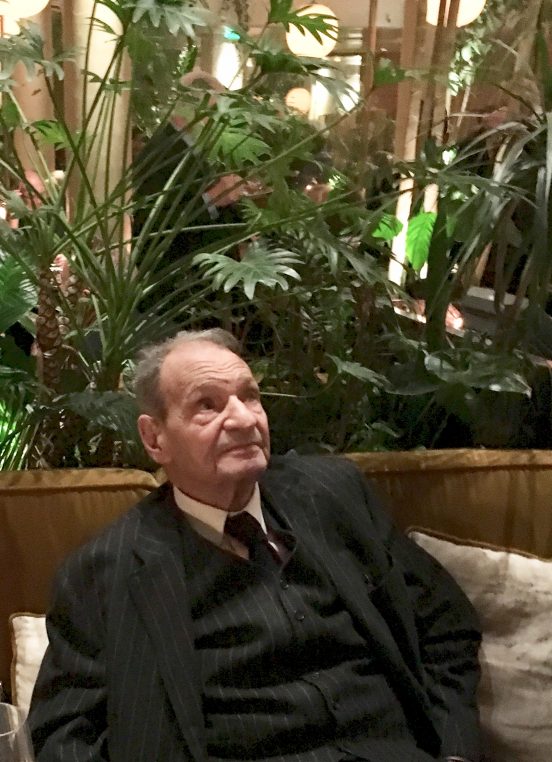 Claude Bernard Haim, born on 5 October 1929, was an extraordinary art lover who founded his gallery on 5 rue des Beaux Arts in 1957 and detected talents among the greatest painters. His friendship was instrumental in Sam Szafran’s career, he was the first one to exhibit Bacon in Paris in the 1970’s, and defended Xavier Valls and the charming Jacques Truphemus until his death.  But his first great passion was music and he studied the piano and organ at the conservatory in parallel with attending Ecole du Louvre. He was sitting at the desk of the gallery until very recently and you could at any time drop by and chat with him about Parisian life. He died on November 16, and was buried at the Montparnasse cemetery on the 21 st of November, surrounded by his sister Nadine Haim and his nephews and nieces.

END_OF_DOCUMENT_TOKEN_TO_BE_REPLACED 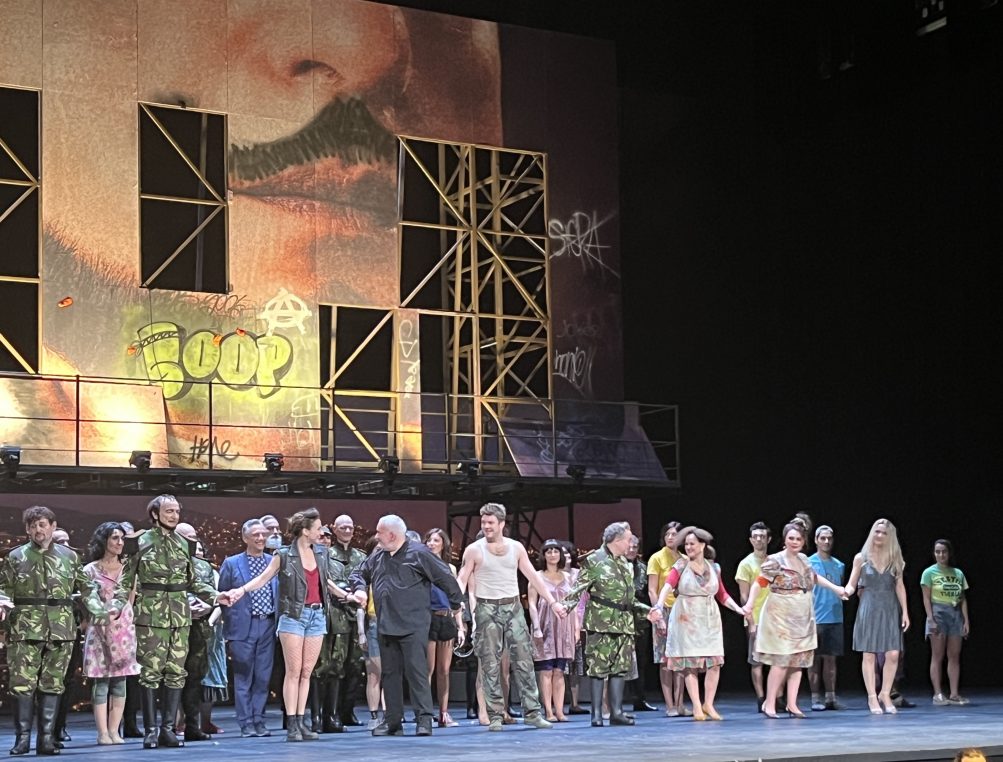 Théâtre des Champs Elysées is the most cherished place by Parisians for concerts and operas at the moment. It is easily accessible, the theatre is a beauty opened in 1913, and the productions of extreme quality. This is where we can see Offenbach’s la Périchole at the moment and until November 28, in a production by Laurent Pelly with Marc Minkowski conducting his “Musiciens du Louvre. Marianne Crebassa (who is expecting) was replaced by the excellent Antoinette Dennefeld and Stanislas de Barbeyrac was as attractive as usual. The modern sets and costumes worked well except for some atrocious t-shirts and shorts which are useless, and quite unpleasant for two and half hours, I think. How can we dream when faced with tattoed sleeveless singers? END_OF_DOCUMENT_TOKEN_TO_BE_REPLACED 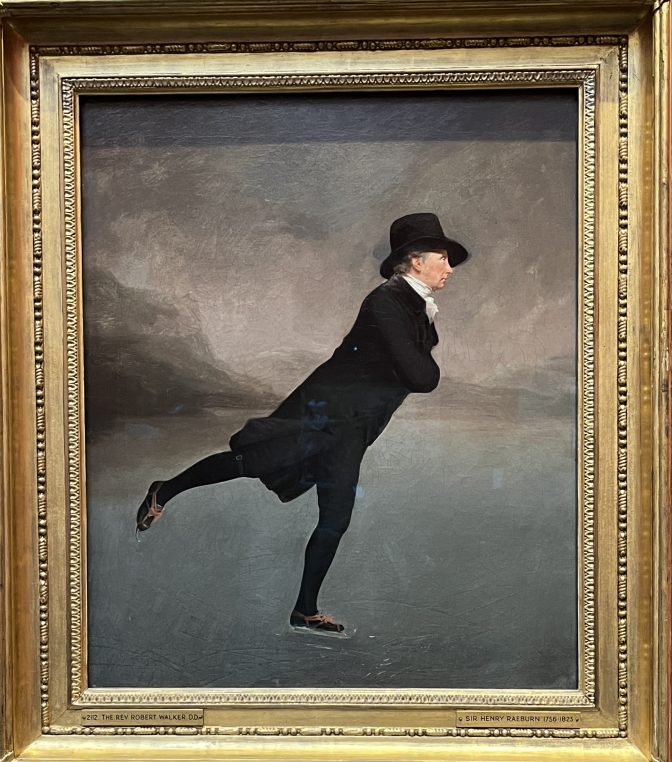 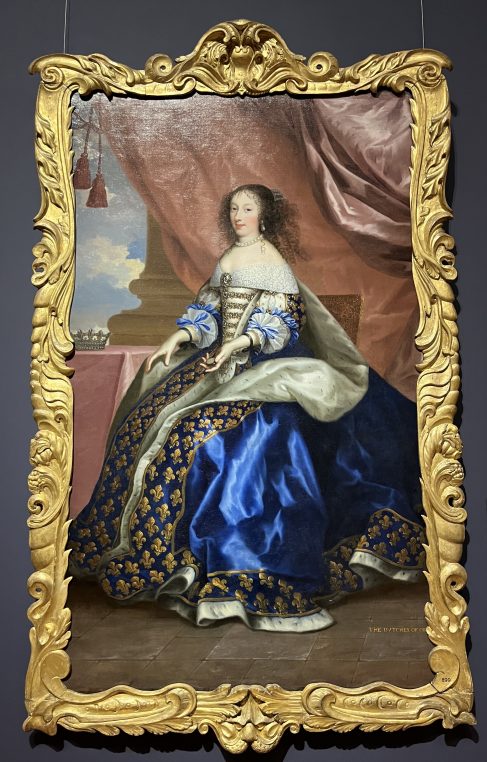 I thought that it would rain all week end so I had practiced to play golf in the rain the previous week so as not to be too disappointed. And the weather was so sunny in Dornoch, the town forty miles north of Inverness, that we could not believe it. A four day week end in Edinburgh and Skibo castle via Beauly, the seat of the Fraser family, was a series of miraculous encounters and discoveries including the Scottish National portrait gallery which holds treasures I had never seen. And I read “The Edinburgh Skating Club” by Michelle Sloan which tries to solve the mystery around the Sir Henry Raeburn‘s painting of a minister skating on Duddingston Loch. END_OF_DOCUMENT_TOKEN_TO_BE_REPLACED 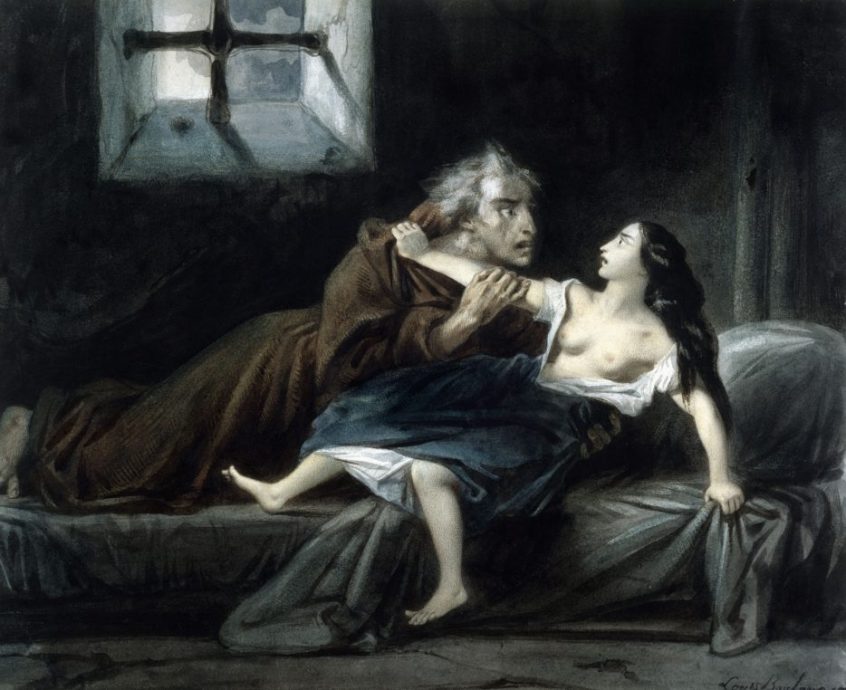 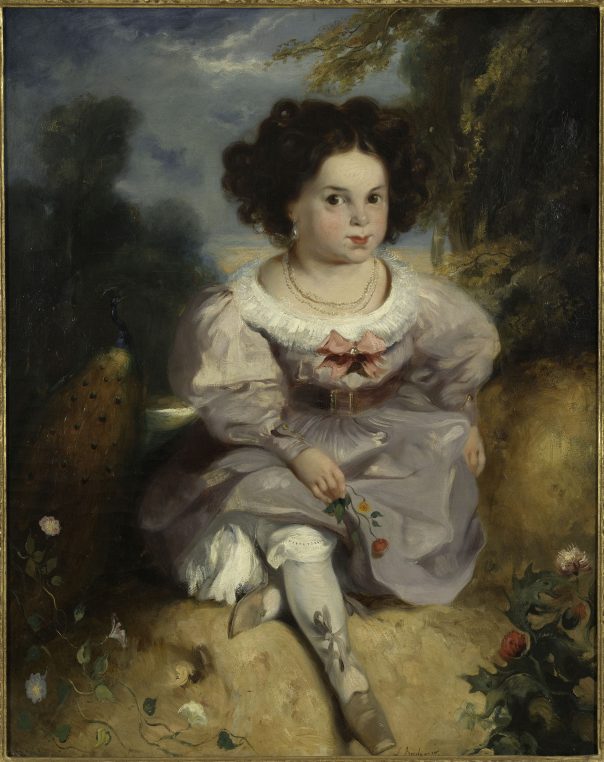 Louis Boulanger needed all the energy of Olivia Voisin, director of Orléans museums and a great specialist of Achille and Eugène Devéria, to make Parisians rediscover his role in Victor Hugo’s life and his talent as a painter and print maker. His art is  very classical and reflects Romanticism in the first half of the 19 th century (1800-1867); mostly it fits perfectly in the ravishing museum devoted to Victor Hugo on place des Vosges and feeds our curiosity on the friendships developed early on by the greatest French writer… It is the perfect occasion to visit his house, if you have never been. END_OF_DOCUMENT_TOKEN_TO_BE_REPLACED 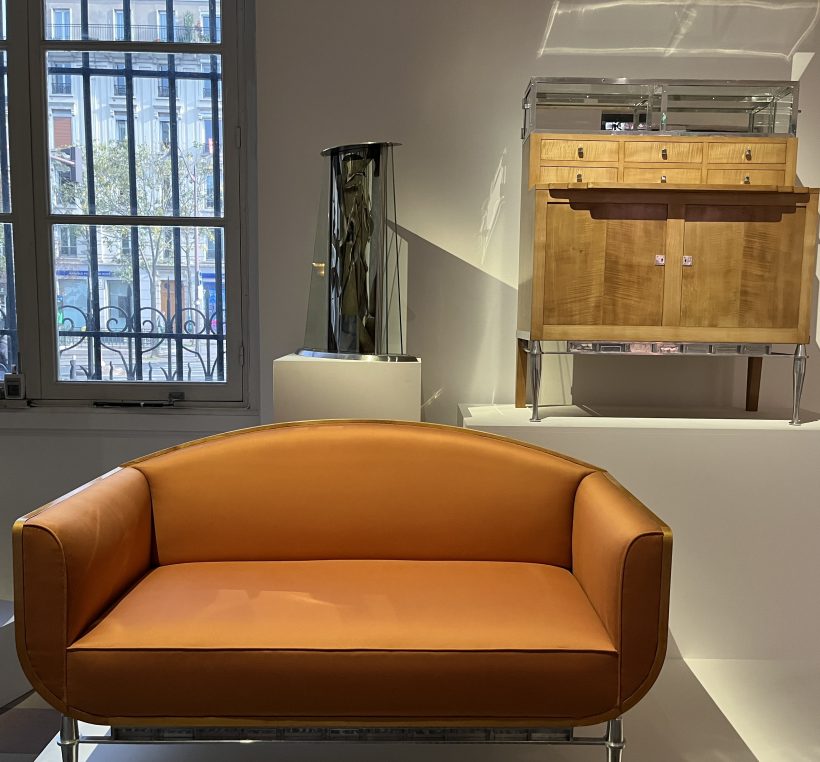 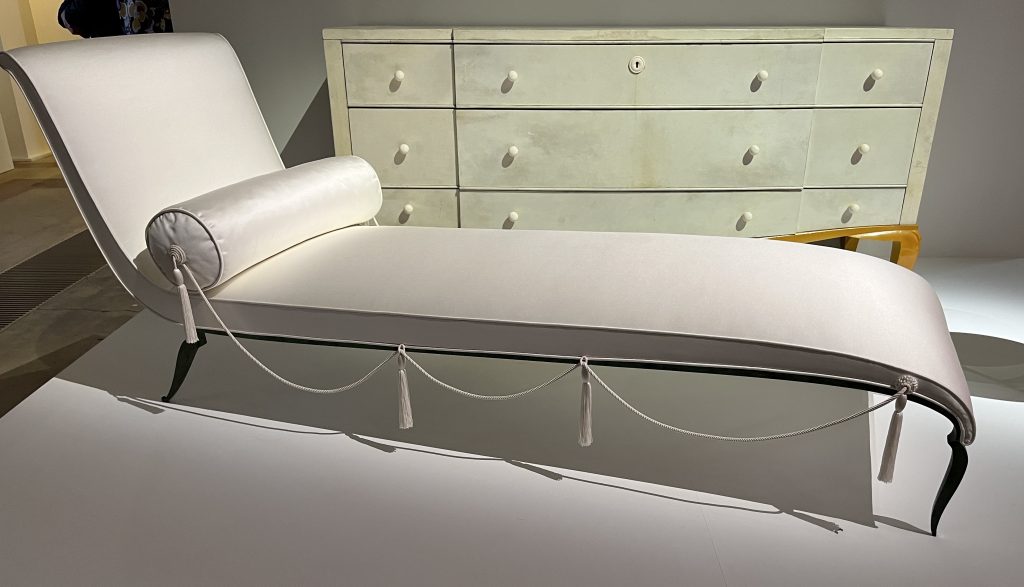 The only mistake with the new show at Mobilier National called “Le Chic, Decorative arts from 1930 to 1960” is its title which could deter anybody to go and visit. But so many friends told me it was a great exhibition that I went, after seeing the Art Deco show at Chaillot. And it was, in a way, a welcome sequel.  Two hundred pieces of decoration designed by André Arbus, Jean Pascaud, Jules Leleu, Marc du Plantier… are set in decors and perfect salons by Vincent Darré, the trendy decorator who was with Christian Louboutin and Eva Ionesco, a very young irreverent kid in the Palace years of the 1980’s. The result is a fun, fascinating and impressive show of the French savoir faire, including the war years when the collections of Mobilier Naitonal were safely transported to Aubusson and other storage in the provinces. 129 works were restored especially by 50 artisans and the videos showing their work are fascinating. Ateliers de France who defend French artisans is a partner in the show. END_OF_DOCUMENT_TOKEN_TO_BE_REPLACED