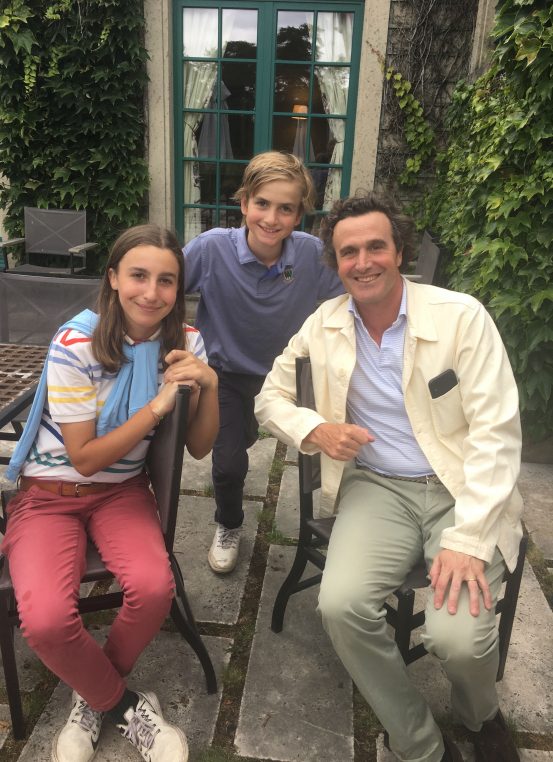 Valentine, 15, Vladimir, 12, and Antoine Delon are all Morfontaine club champions

I know most of you are totally uninterested in golf matters but what happened this week end at Morfontaine golf club near Paris, is such a lovely family saga that I have to tell you about it! A father, Antoine Delon, a 15 year old daughter Valentine and her younger brother Vladimir, 12, have all won the Club’s championship in their category. Such an event reminded me of  Lally Vagliano, aged 16, who won the Girls championship at Stoke Podges and the Fathers & daughters championship with her father André, in 1937, in Pulborough. She went on to win the French National championship at 18, beating Simone Thion de la Chaume-Lacoste and passed her baccalaureate at the same time. While Valérie Dulout won at 18 and became Portugal’s International champion, Valentine is the youngest to have ever won since the founding of the club in 1927. 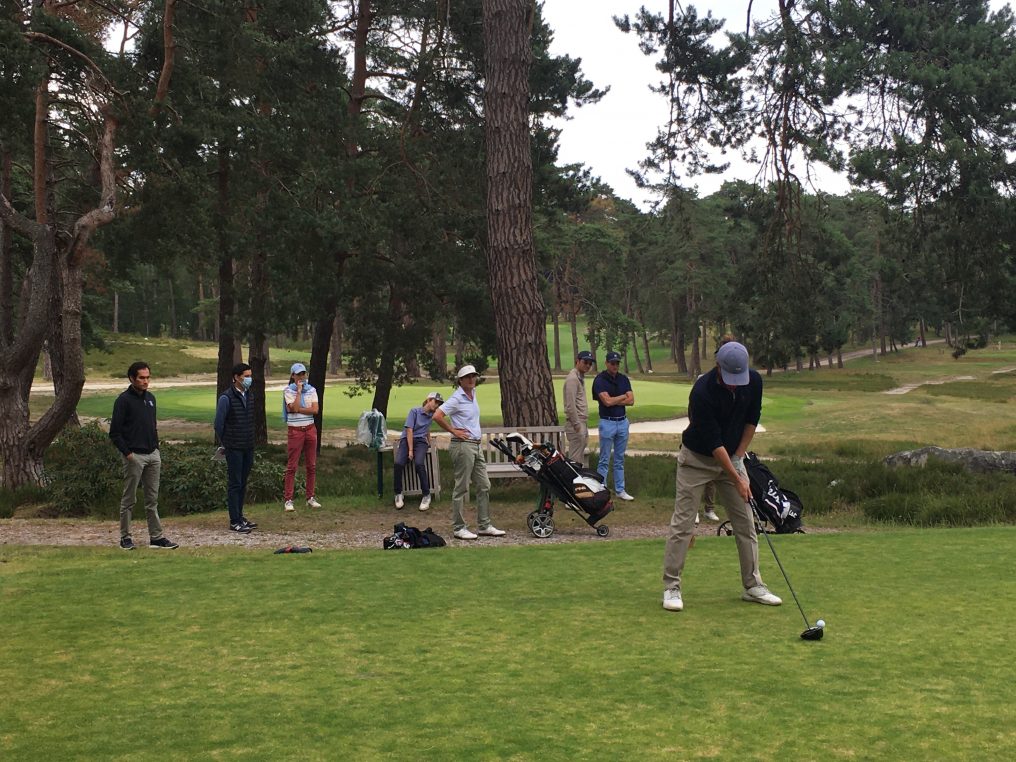 Pierre Cohen Boyer on the first tee for the final

The men’s final was riveting with father and son following each other. While little Vladimir was playing his driver on the fairway (he played from the same tees as the adults), achieving a birdie on the 9 th hole, with two drives and one put!, Antoine was chipping and putting fabulously. It was a great lesson in humility to see the longest players being beaten by the best short game players… But what struck me most was the graciousness with which the boys who had lost, followed the winners with passion. The elegance of this final could be felt at all times and golf was really played as a gentleman’s sport. 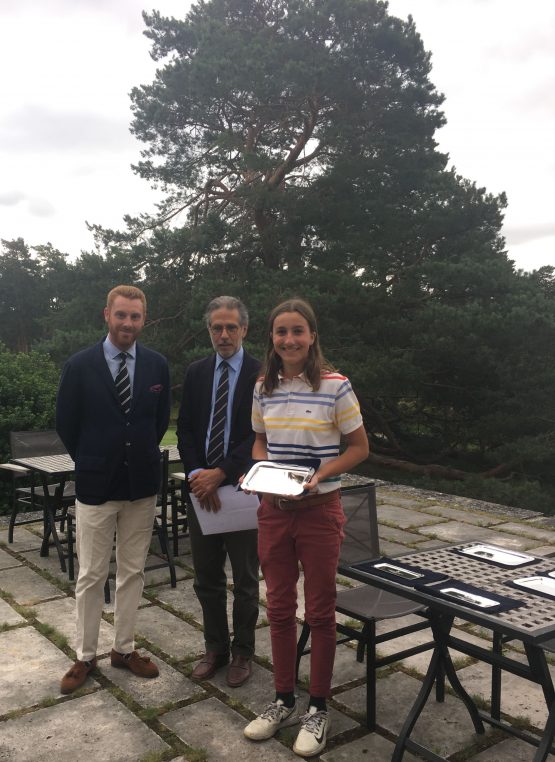 Valentine Delon with Guillaume Beau, head of the Sports commission and Jean Dulout, director of the club

Valentine benefited from a lot of free time from school, after confinement ended a month ago, and she trained assiduously. As Jean Dulout, director of the club reminded us, “a year ago, she was being operated on her back and no-one knew whether she would ever play golf again”. What a lesson in life! And congratulations to her surgeon! She now plays with an index of 2,6 and dreams of being part of the French National golf team. 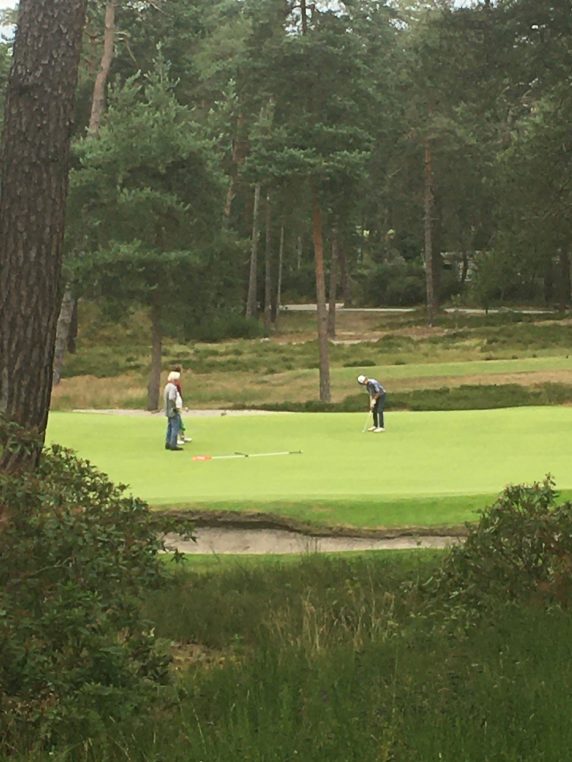 The winning putt for Vladimir on the 18 th hole

Vladimir is another story. After hitting his usual fairway driver shots on the 18 th, he fell in the bunker, got out two meters from the pin and holed the putt for victory. He plays very fast, with determination and jumps up and down while pulling his trolley, like a facetious imp, even after having played 36 holes. And he refuses to be caddied! His tenacious opponent, Nicolas Nonon, a very long player, was totally disconcerted by his game. And everyone was smiling all along! 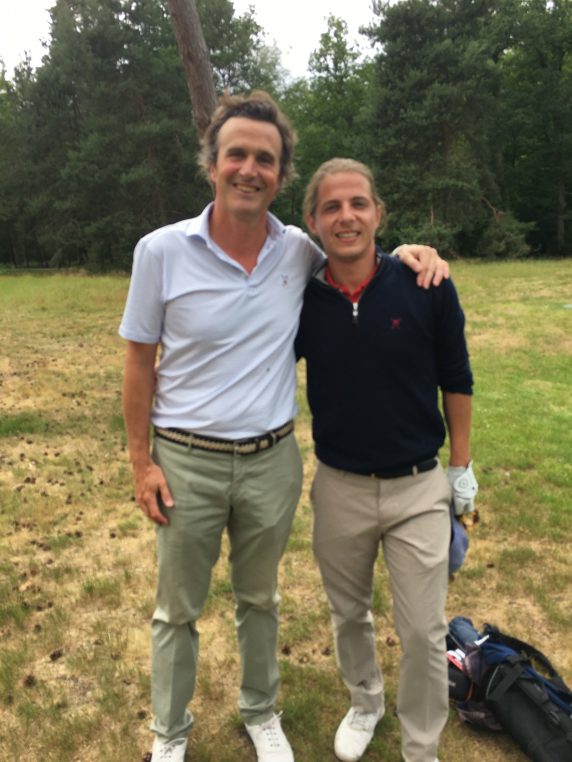 Chipping in the hole, getting out of the woods “Ballesteros” way, piling up eagles and birdies, the list of heroic shots was breathtaking all week end, with many games going on to the 20 th hole (2 more than usual) for victory. It seems that after two months of confinement, golfers are more enraged than ever and the beauty of the course was part of the excitement. Golf is truly a great life teacher.

On Lally Vagliano you can read: “Lally” edited by Nathalie Jeanson.

5 Comments on “A golf family saga and the victory of youth!”