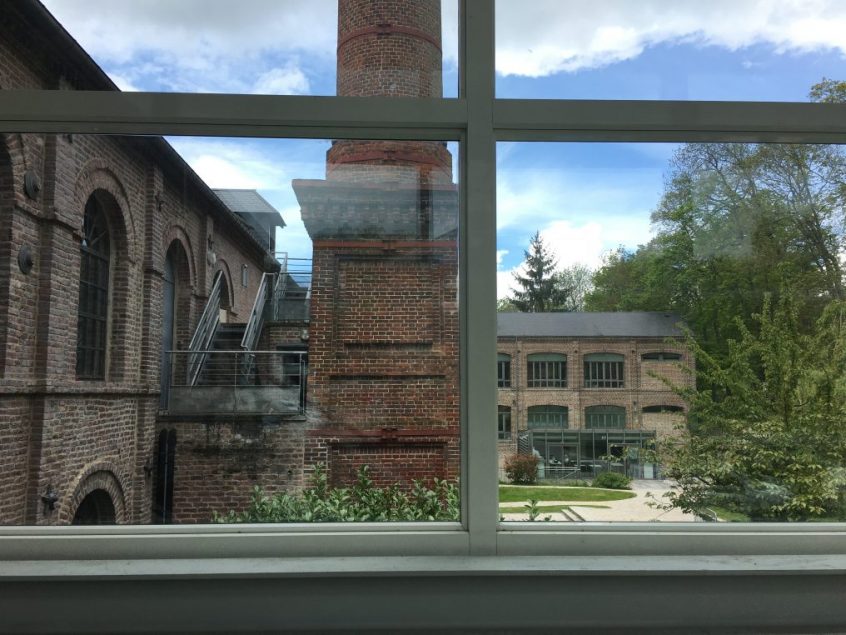 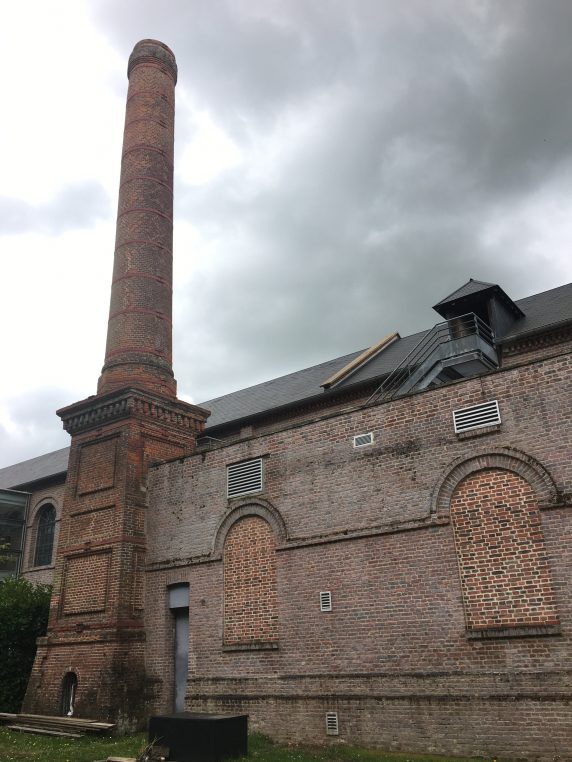 Le musée de la Nacre et de la Tabletterie is located in Méru, a town with 12 000 inhabitants, which was at the end of the 19 th century and until 1972, THE capital for buttons manufacturing in Europe with 10 000 workers. Visiting the old workshops, with a demonstration of six or seven operations on the original shells to create a pretty button, was enlightening, and the countryside is so pretty that you can turn this visit into a full week end with the visit of Van Gogh’s Auvers-sur-Oise and the l’Isle Adam museum Louis Senlecq, nearby. Beauvais and its fabulous tapestries and cello festival in early June, are just thirty minutes away…. 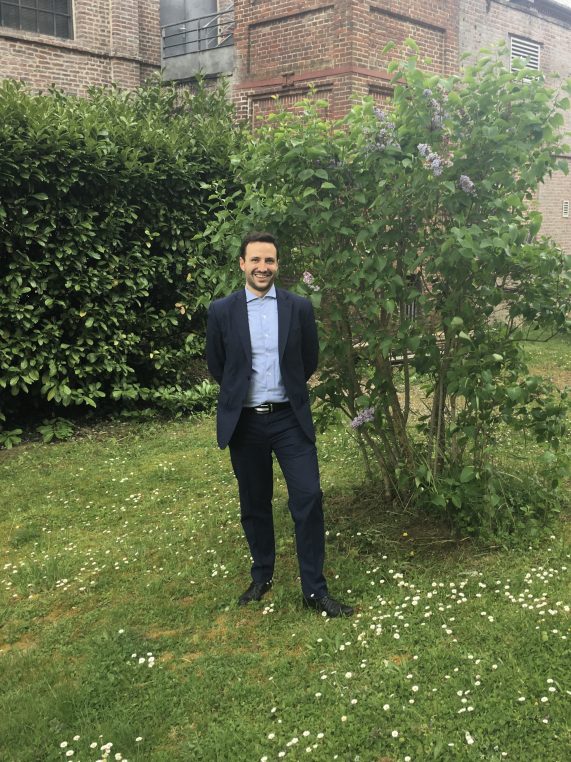 Florentin Gobier, 29, is the curator of this very special museum

The museum was founded in 1999 in the old Degrémont factory,  and concentrates on old workshops bequeathed  by local manufacturers and thousands of buttons but also a fantastic collection of 18 th and 19 th century fans and all kinds of games (chess, etc) and brushes made in bone, ivory, turtle shell, boxwood, horn or mother of pearl of course. 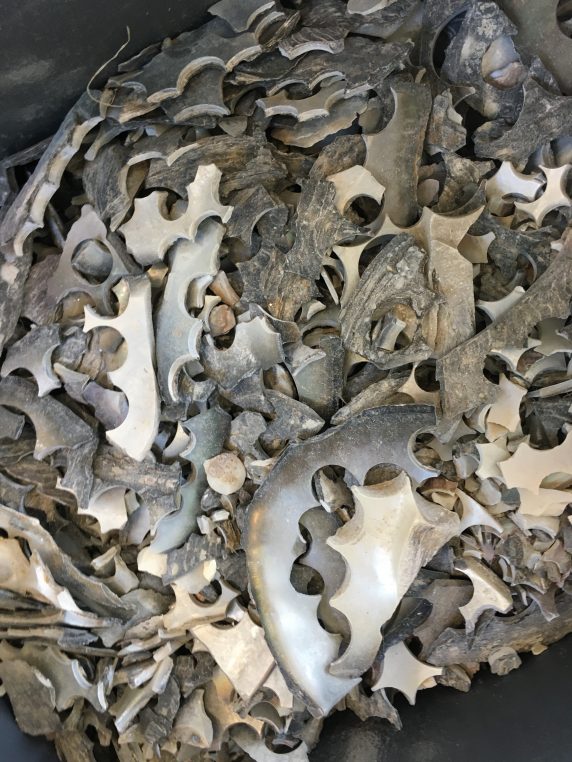 A group of shell after they were cut out into buttons

To be a “tabletier”, one of the workers in these factories born in 1858 in Méru, was not a promise of wealth for the future but a few of them (there were 100 factories in Méru at the turn of the 20 th century) became rich negotiators and started investing in the islands of the Pacific where the material came from. When they realized that bringing the heavy shells to France was too expensive (at first it was free as a weight to the ships), and given the amount of waste in each shell, they created factories in New Caledonia, Tahiti, the Caribbeans, Madagascar, and imported “pions” (pawns) which would then be decorated and polished in Méru so they could be sold as Parisian. 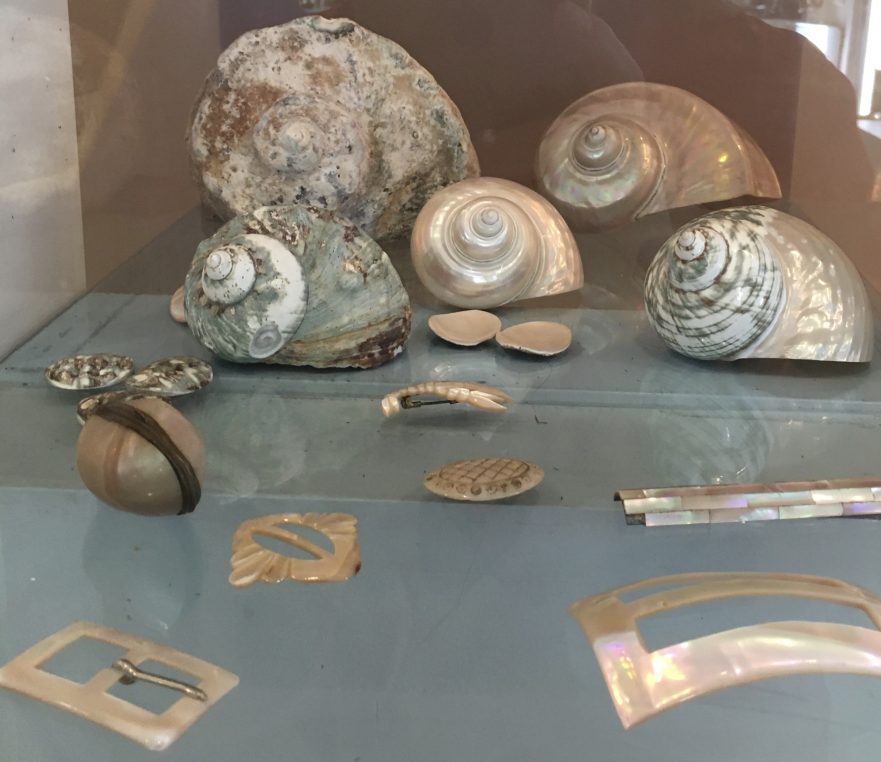 On each shell, a huge work of cutting, shaping, decorating and piercing holes takes place thanks to a steam machine (nowadays an pressurized air machine) and our guide, Céline Marti-Louvet, a thin and pretty young lady, activated all the heavy equipment with incredible dexterity. When you visit, you can book a tour to understand the six or seven operations performed to make one button. I will treat my mother of pearl buttons with more respect from now on! 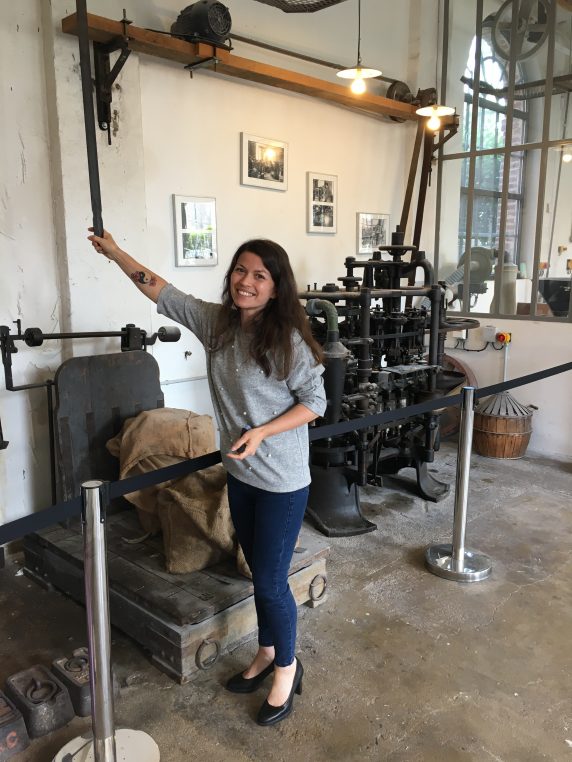 One of the machines cuts the shell with a 7-8000 tours minute instrument. Water is used to cool the material because mother of pearl is very fragile and can burn easily. In the large workshop which we visited, there were up to 80 workers actioning machines in the 19 th century and creating a dense dust from the shells. The noise was unbearable as we can realize with just one machine working for us. And workers very rapidly caught the “asthme du boutonnier” the button maker’s asthma. 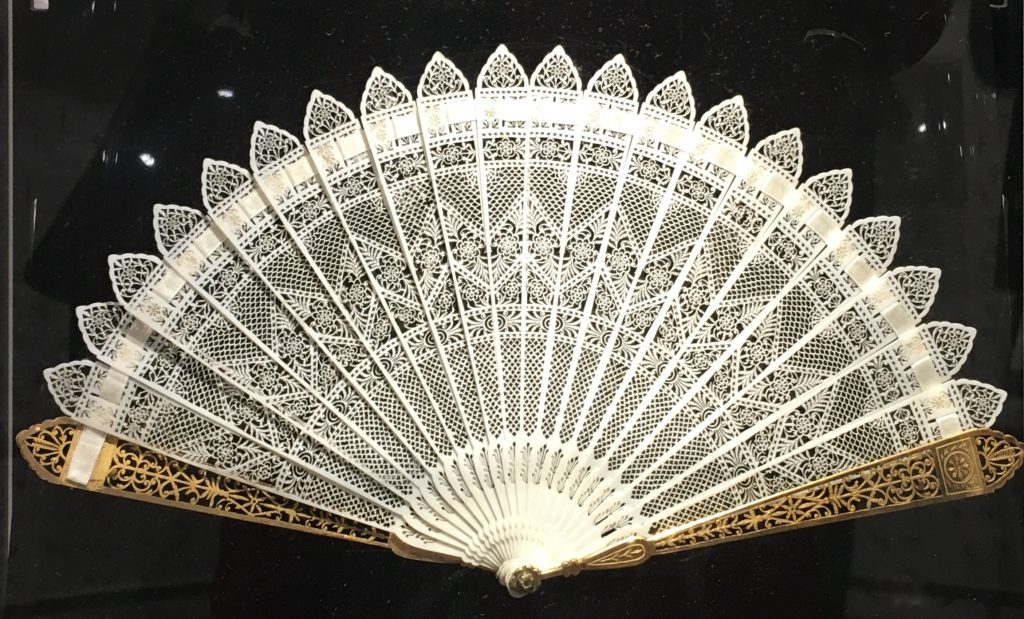 Since his arrival three years ago, Florentin Gobier has been concentrating on acquiring new fans like the one signed Colonna. I learned that the greatest collection of fans is in Greenwich, England, and used to belong to Mrs Hélène Alexander. It has 5 000 fans! He was also bequeathed a group of specimen buttons collected in 1889 and presented in a frame, which belonged to Gustave Cléret, a local manufacturer. 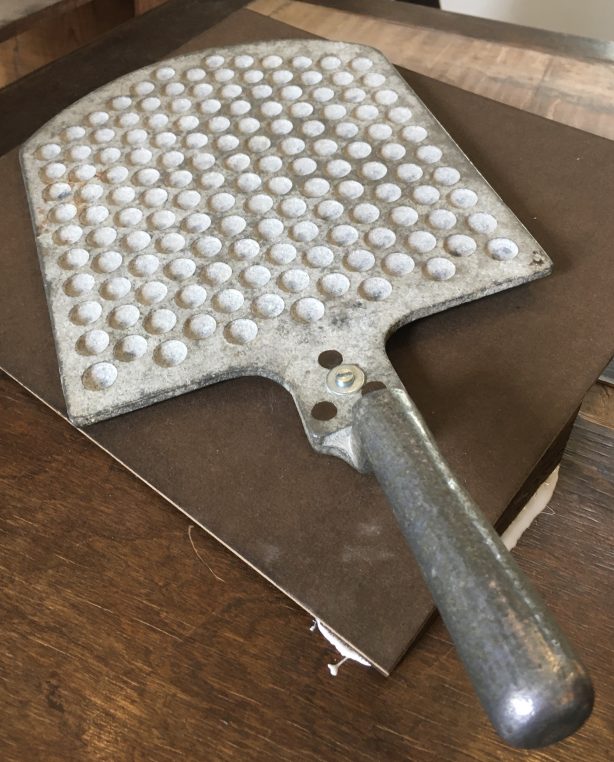 Once the buttons were finished they had to be counted or weighed. The workers were paid by the numbers. La Grosse was the total amount and in order to count them fast, a shovel with holes was plunged into the stack of buttons and shaken, and 144 of them could be immediately counted by the overseer. I love this instrument which is so simple and visual.It comes in different sizes according to the size of buttons. 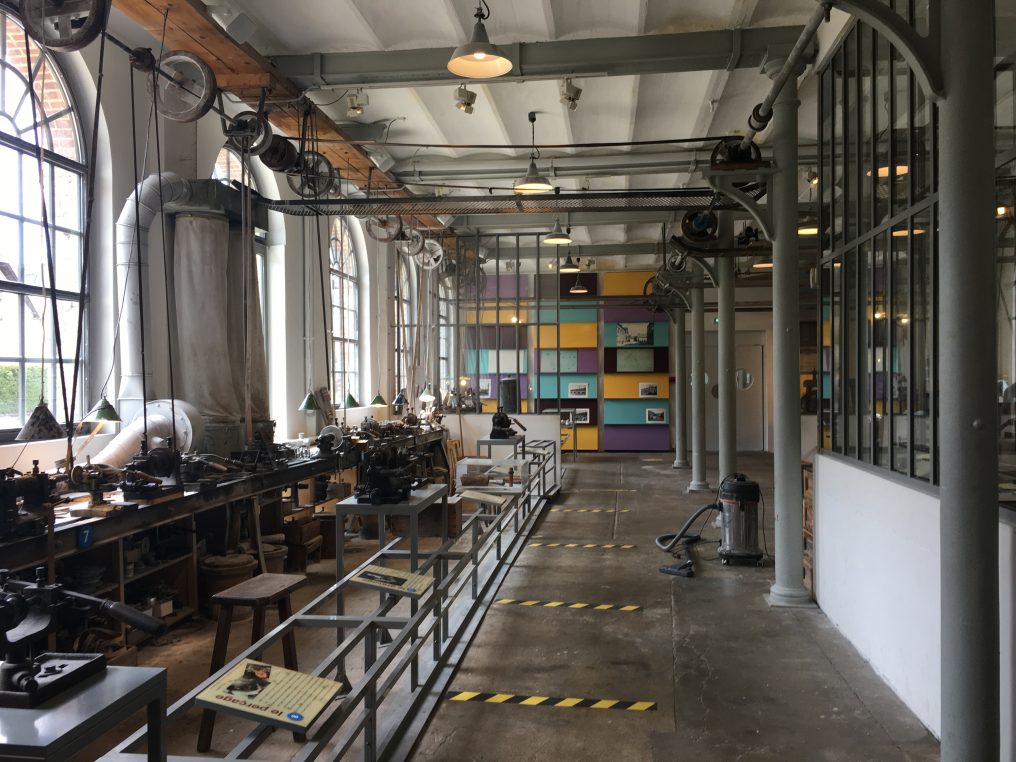 The workshop with all its machines which were activated by steam

You see it’s a whole adventure that awaits you in Méru, an hour North of Paris and just south of Beauvais. Like all museums in France, it reopens on the 19 th but check their website for reservations and opening times, afternoons mostly. The Hotel de la Tabletterie is located next door with a good restaurant. And don’t hesitate to contact Florentin Gobier if you have strange mother of pearl objects that you would like to get rid off, this young museum is happy to acquire new pieces. 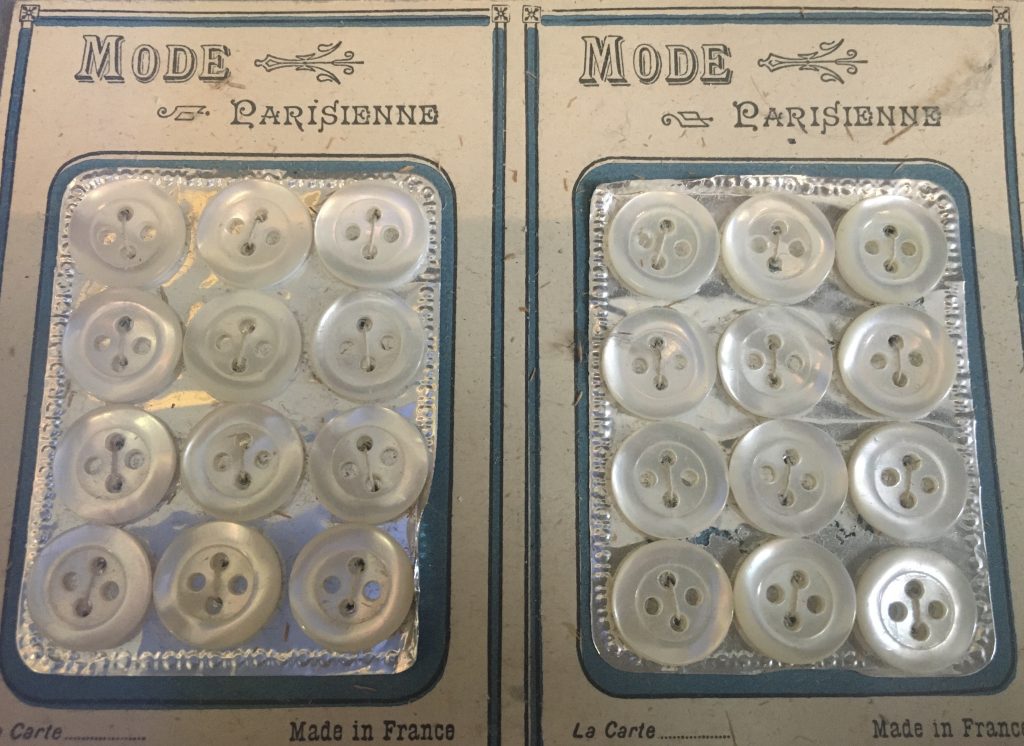 12 Comments on “A museum for mother of pearl is a true find, an hour north of Paris”