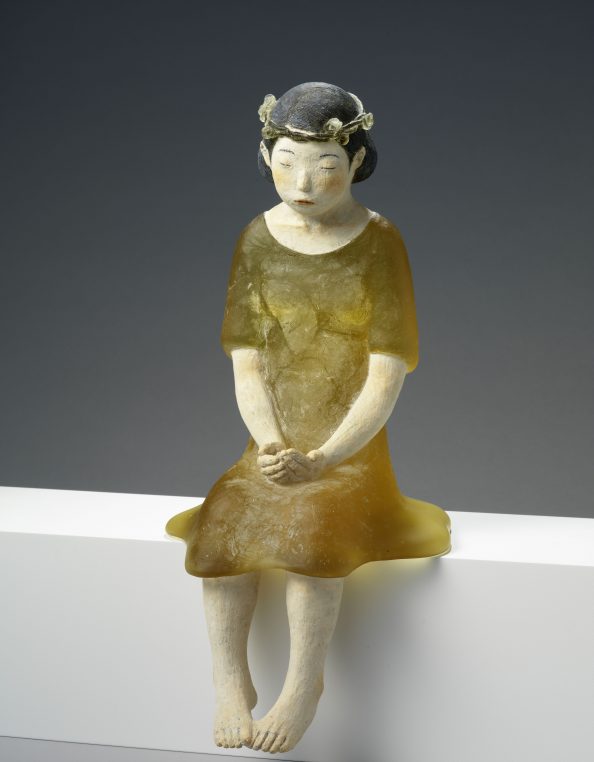 It is a true expedition to reach MusVerre, near Maubeuge on the Belgian border, a half hour from Château de Chimay, three hours from Paris, an hour and a half from Brussels. The museum is dedicated to contemporary glass sculpture and was designed by W architectures and architect Raphaël Voinchet in 2016. It houses collections of “bousillés”, free works from the glassworkers of Sars-Poteries, which were collected by the local priest Louis Mériaux since 1958. This was the start of the museum, where he organized an International Glass symposium in 1982 and a Colloquium in 1984 which recognized contemporary glasswork worldwide. The collection of the museum is made of works given by the International group of sculptors who attended, from America and Japan,  Holland, Germany, Belgium, Spain and Italy, from Eastern Europe. Under the artistic leadership of Anne Vanlatum, who started her professional life at Musée des Arts Décoratifs,  Gigi and Marcel Burg  gave 86 works from their collection. She is the soul of the museum with a huge knowledge of the artists and their glass techniques. 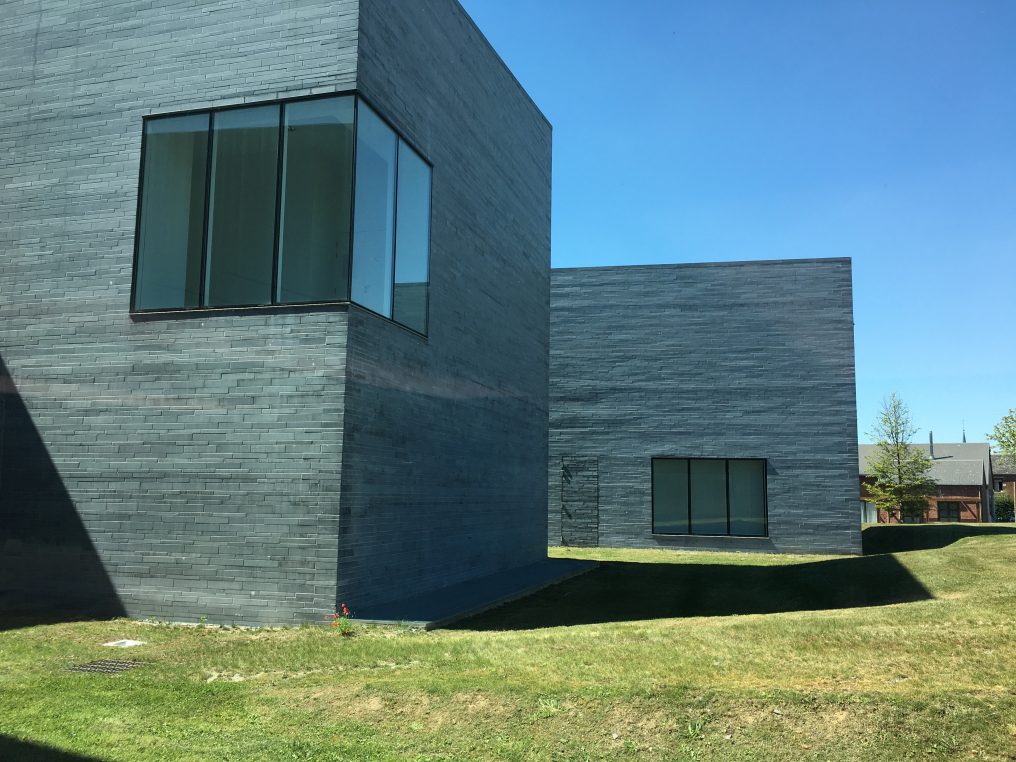 The building in pierre du Hainaut, a local blue grey stone, is perfectly adapted to the shape of the land and to the transparent material and its large glass openings give excellent light even in winter. Raphaël Voinchet the architect from Toulouse (a cousin of Marc Voinchet, director of France Musique), is more accustomed to the southern light of Fondation Bemberg, the city of Pamiers in Ariège or Musée Ingres in Montauban, but he has achieved a beautiful 3 000 square meter building which enhances the pleasure of visiting the glass collection. 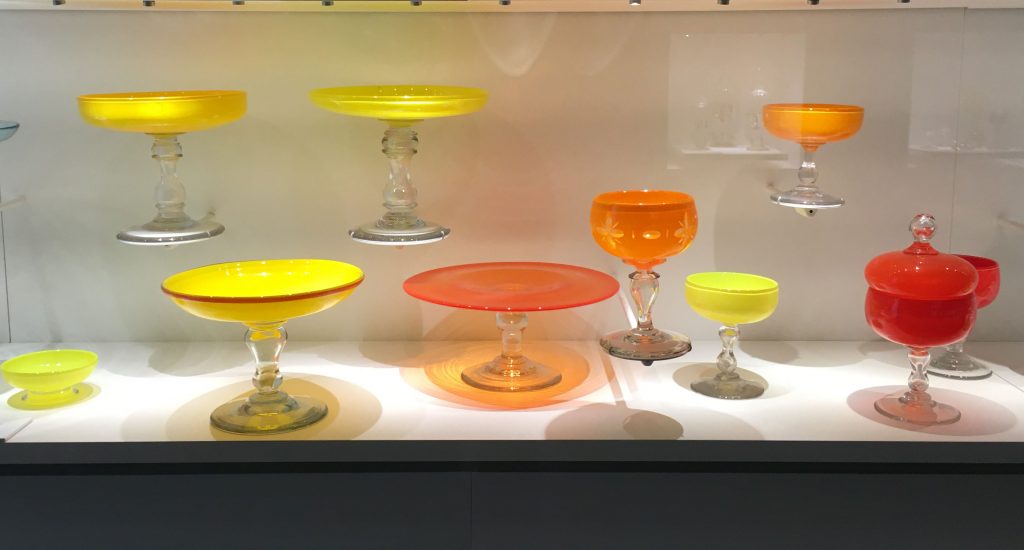 “Bousillés” or whimsies, were made in their spare time from 1802 to 1937 by the workers of the factories

Louis Mériaux, the founding father of the museum, was appointed parish priest in 1958. He organized the first exhibition of “bousillés” and opened the glass studio in 1976 with retired glassblowers who could then pass on their know-how. At the same time, Eastern European artists started experimenting with geometric shapes and the Studio Glass movement, born with Harvey Littleton in the United States, revolutionized the art of glasswork. Built since 1994, the contemporary collection (largely composed of works given by the artists), is housed in a large room with garden views. It is just overwhelmingly beautiful. 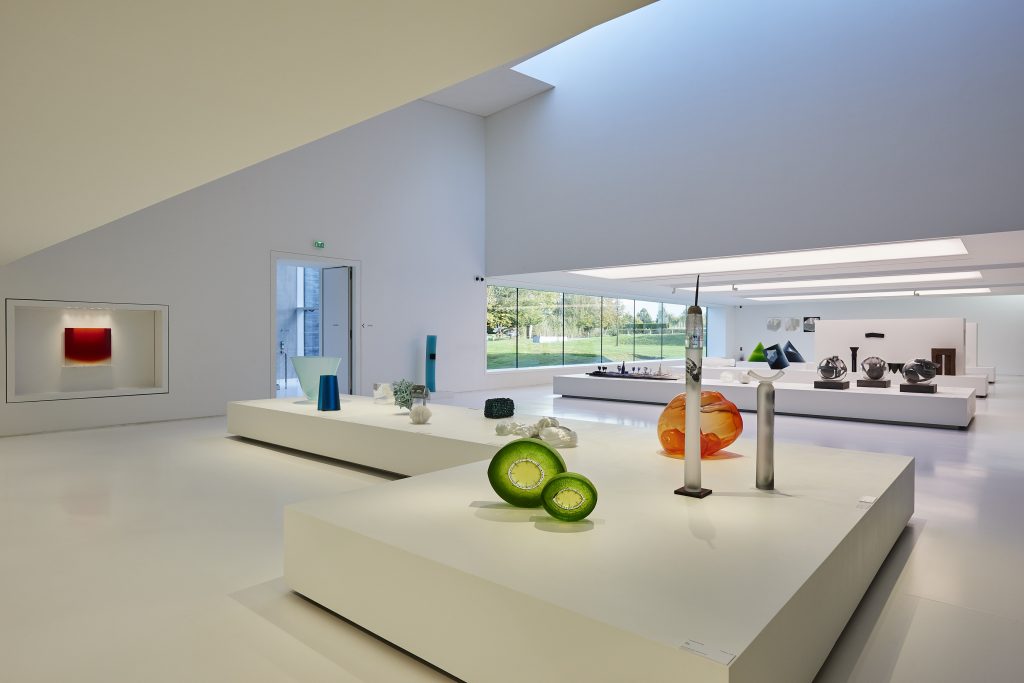 After a series of classical small rooms with épis de faitage for the roofs (finials), oil lamps, sugar bowls, fruit dishes, cups and bottles, one discovers the production of the different symposiums with works by Joaquin Torres Esteban,  Claude Morin, etc. Perrin &Perrin have an interesting “Ligne de fond III” in molded glass, Dale Chihuly has an orange  wrap, Richard Meitner and Giuliano Geiger  a sculpture in glass paste. Annie Cantin from Canada and Barbara Nanning from the Netherland both have great pieces as well as Isabelle Perigot from France who shows mosaic glass. Matei Negranu is present with  blown glass and led large sculptures. 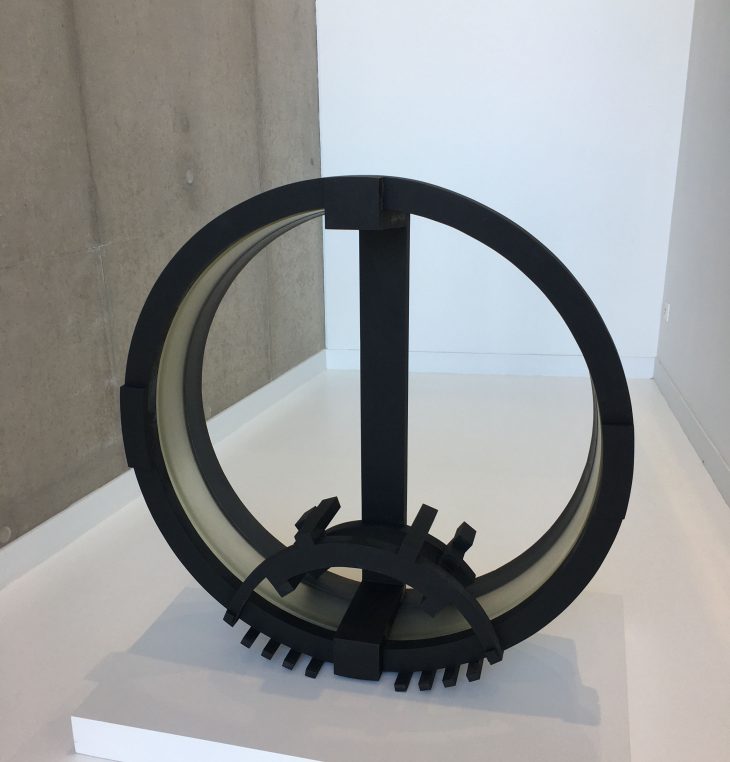 An extraordinary breastplate by British artist Philippa Beveridge acts as a vulnerable glass protection in crystal and was made on the premises during a residency in the studios attached to the museum.  Masayo Odahashi did a small statue of a girl in glass paste, Anne Donzé sculpted a ball with hands in “Penetration”. South Korean artist Bong Chull Shin sends a message in broken glass “”I woke up with your name on my lips”. Antoine Brodin delivers ” Migration”, an installation of glass and pouzzolane, which represents a sunk ship. 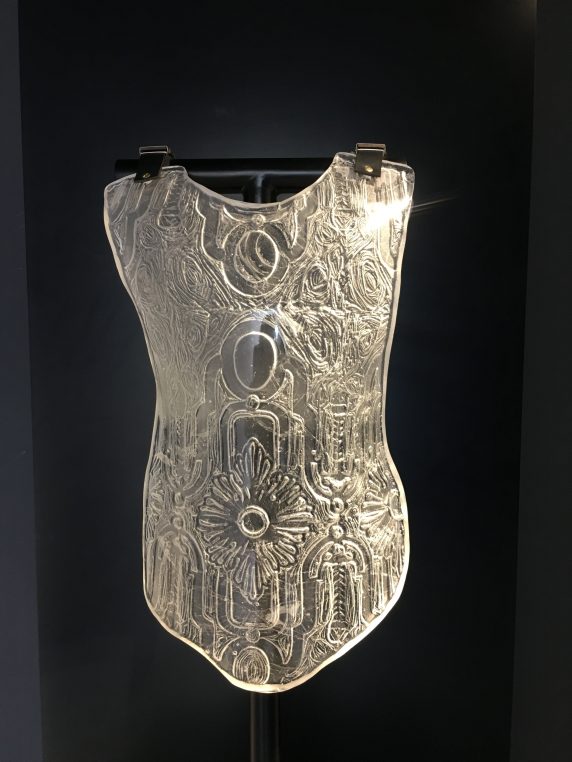 Philippa Beveridge, “The Human presence in the Absence of a Figure V”, 2010

I hope that by now, you are convinced that the pilgrimage to MusVerre is essential.

You can add the visit of Musée Matisse in le Cateau Cambrésis on the way (only open in the afternoon at the moment) and have lunch in the very nice old bier brasserie in town. It’s colorful and cheap and serves Welsh rarebit, Andouillette, Tarte au Maroilles (strong local cheese) and Potjevleesch du Nord or potted meat…

Just make sure to check opening times and some mandatory bookings!