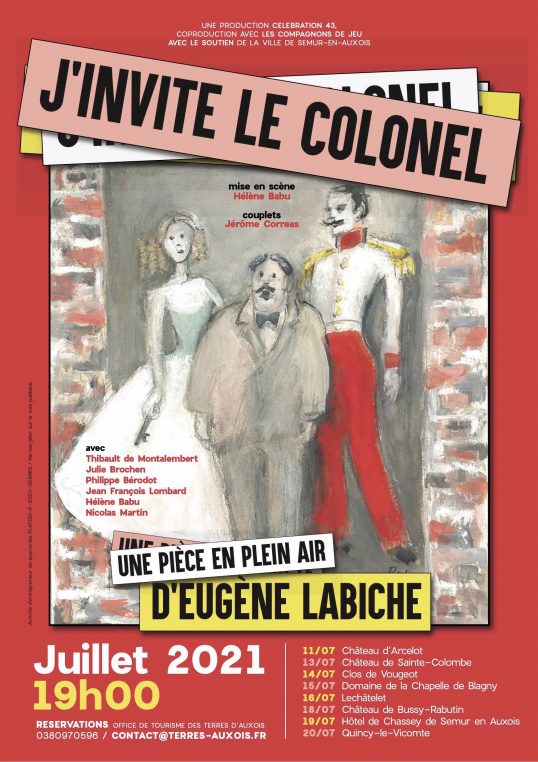 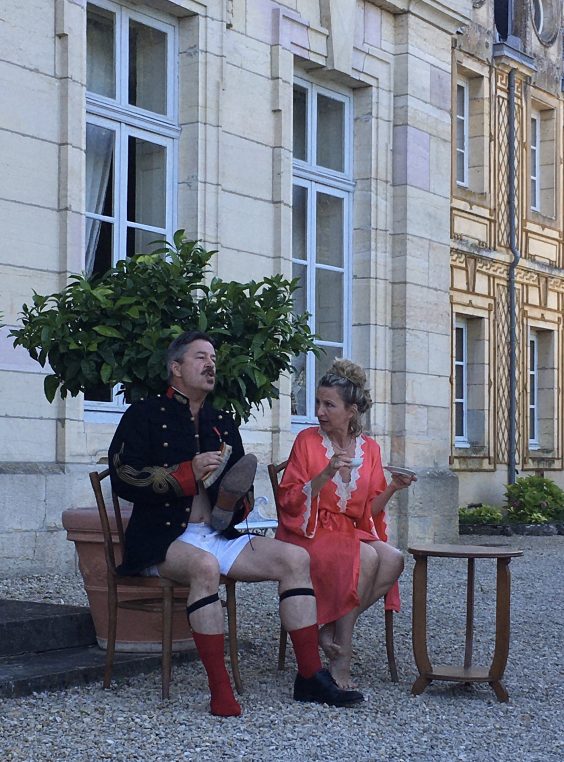 It was a divine surprise! We drove almost four hours to Arcelot, near Dijon, to attend the Première of Thibault and Hélène (Babu) de Montalembert’s crazy ten days of performance in the open of “J’invite le Colonel”, a vaudeville play written in 1860, by Eugène Labiche one of France’s most comic and prolific (he wrote 176 plays) 19 th century playwright. The decor of château d’Arcelot, an 18 th century neoclassical hunting lodge, the magnificent park at sunset and the six fantastic actors, turned our heroic drive into a moment of pure pleasure, laughter and relaxation. They will be playing all week: at Clos de Vougeot on Bastille day, Château de Bussy Rabutin on the 18 th, in Semur en Auxois on the 19 th and in Quincy le Vicomte on the 20 th. If you are in Burgundy, do not miss it! 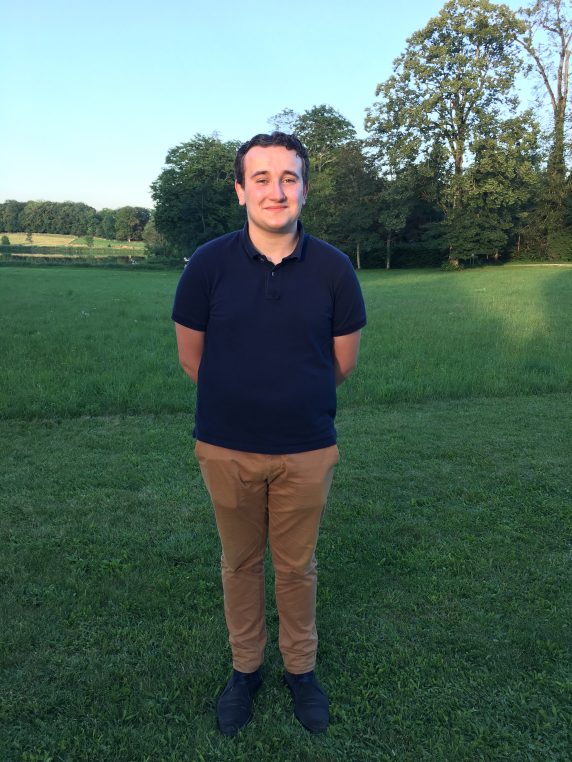 Nicolas Martin was a revelation. He is a first year student at Cours Florent and plays the insolent valet

Thibault de Montalembert, whom you all know now as the agent of “Call my Agent” (10 pour cent in French) loves to be in a troupe. He trained with Patrice Chéreau at Théâtre des Amandiers in Nanterre and briefly joined the Comédie Française. For the fourth year he has organized this modest open air festival in Burgundy with his wife Hélène Babu. Castle owners open their parks and the famous Clos Vougeot vineyard, its courtyards. We are near Dijon at the heart of wine country and medieval castles and monasteries: Bussy Rabutin, the Renaissance castle started in the 12 th century, is one of the highlights of the week as far as decor is concerned. 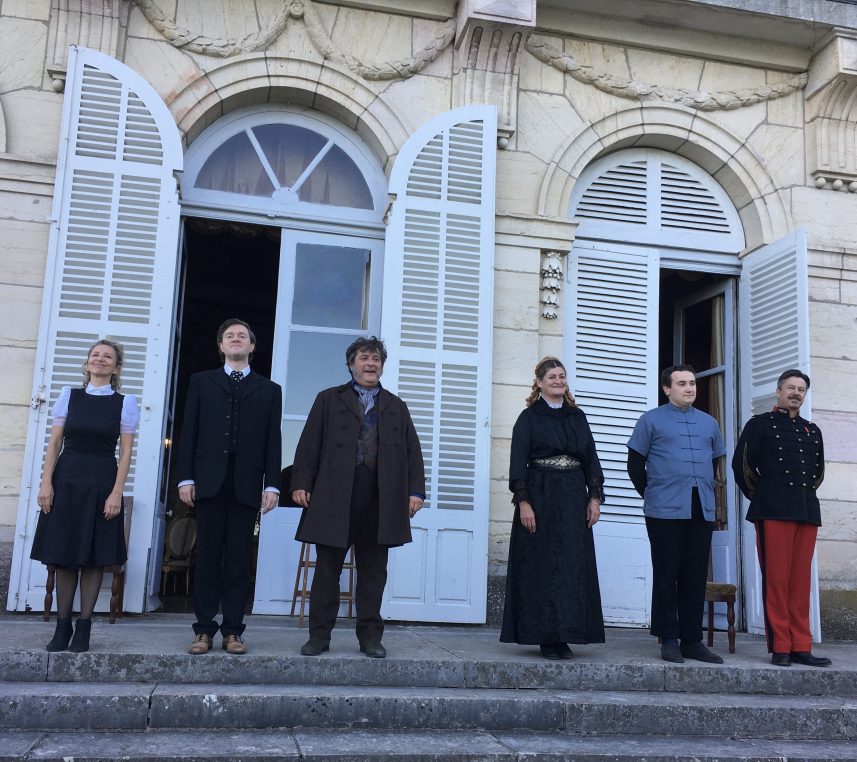 The play is set in Paris and the characters have lunch at Véfour and attend the ball at the opera where they meet young beauties. It is centered on money and womanizing of course, but the quality of the acting turns simple comical actions into a moment of dream where you forget everything. There are two very special moments when the young Nicolas Martin, the valet, tries to count the change his mistress has asked him to make and the monolog which countertenor Jean François Lombard, declaims about saving money. It is Martin’s professional début and I have to admit I was totally overwhelmed by his ingenuity. Lombard was singing in Versailles’s chapel a few days before and directs the singing with great spontaneity and his voice is outstanding. 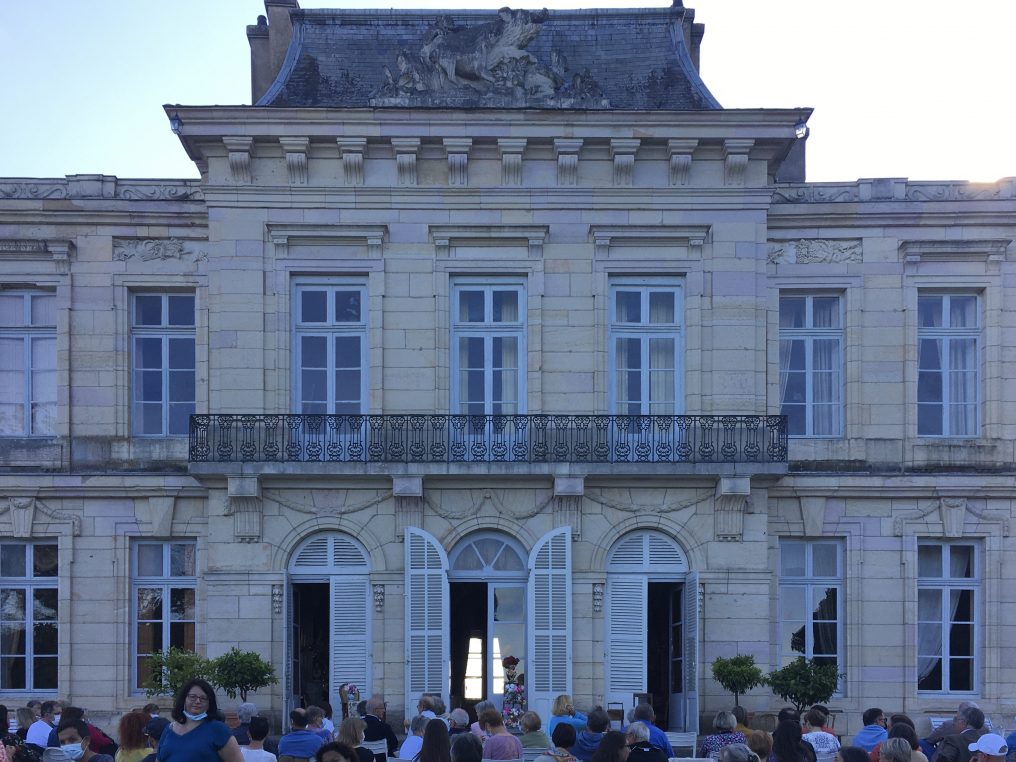 There is no lighting and no decor except for the beautiful house of Arcelot. Hélène Babu’s direction is brilliant given the lack of any artifice and the golden light on the English style park obviously inspired the actors, who were facing it. The main part is acted by the excellent Philippe Bérodot who plays the naughty husband. He will be reciting Apollinaire with blues musicians at Théâtre de Suresnes on October 8 and 9 th. His wife in the play, Julie Brochen, is stubborn and particularly unattractive: it was a relief, over dinner, to find out how stunning she was in real life. She used to run the TNS, Théâtre National de Strasbourg and is also a theater director.

Modesty and excellence were the motto of the evening which ended with a couple of magnums of Moulin à Vent offered by Pâquerette de Loisy who now runs the chateau d’Arcelot. What else could one ask for?

Booking is made through the tourist office of Terres d’Auxois