In the Romantic Gothic gallery, a fabulous coat (center)  made of goose feathers painted in gold

« London is where I was brought up, it’s where my heart is and where I get my inspiration » writes Alexander Mc Queen at the entrance of the exhibition of the V&A in London. I had seen the show previously at the Metropolitan Museum in 2011 but felt it would be more meaningful in London, and it was… The crowds are similar, some of the dresses too (there are 66 more in London) but there is something crazy and elegant about this new show that made me run back and forth for a couple of hours to try and understand this genius of couture who died tragically at 40 after having worked on Savile Row, succeeded John Galliano at Givenchy in 1996 and created his own house. 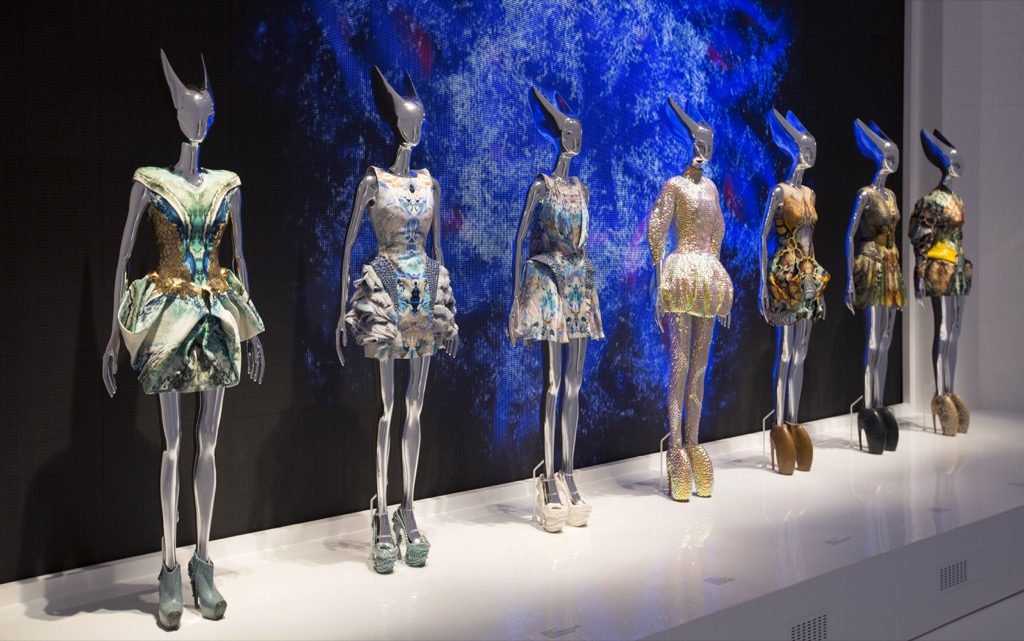 Platos Atlantis, and its fabulous shoes

Born in Stratford the sixth child of the family, he worked for Gieves and Hawk which later inspired his military evening coats. Ten rooms with ten different themes and decors. From grey concrete in « London » to mirrors and gilt wood in « Romantic Gothic », to tartans (his Scottish identity) and red velvet dresses, we discover the Cabinet of curiosities which looks more like a dark cathedral made of black wood with birds singing in the background. The eye searches for peace in this incredibly busy show of headdresses in sculpted wood and jewelry, feathers, fetishist parapharnelia which includes a coat and boots in synthetic hair.

Don’t go to the V&A thinking you will see a fashion show. It is more of an opera about dresses, a night club with objects, a world tour of futuristic design. I particularly liked the grotto made of bones and sculls with seven niches and underwater sound and the videos of the show with Bill Viola-type, rain and fire images. The influence of tribal art and African inspiration is flagrant in the Romantic primitive room and China and Japan have a good part in « Romantic exoticism ».
There were charming little 8 year old fashionistas in the audience who were running around with their silver handbags and golden slippers. Some men were wearing tartan pants in honor of the Scottish origins of the designer, everyone seemed to be on a pilgrimage rather than just a plain visitor. « There is no way back for me now. I am going to take you on a journey you’ve never dreamed was possible. » says McQueen and he did! (until August 2)