Liao Xinxue’s watercolor on silk, reveals both his oriental and occidental training. He came to study in France in 1934

Why did Japanese artists such as Foujita become famous in Paris in the 1920’s and not their Chinese contemporaries ? This is the theme of Helen Szaday’s talk on December 14 th at Christie’s Paris. PAN Yuliang, Nude. This ink and watercolor was painted in 1946

Born in Australia from Hungarian origins, Helen Szaday went on to study in Japan at sixteen and embraced the culture and language of her adoptive country. While raising a family in Paris, she became an expert in Asian modern Art, and is speaking at the invitation of Géraldine Lenain, head of modern Asian art and ceramics at Christie’s. 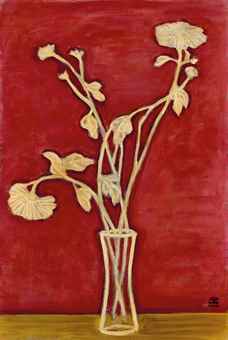 After writing on  Japanese painter Toshio Bando, Helen, who is trilingual in Japanese and also reads Chinese, discovered Sanyu Chang Yu and Pan Yuliang, two Chinese artists who also lived in Montparnasse, a parallel life to Diego Rivera’s or Picasso’s. This Chinese community of artists has remained fairly unknown and their works are reaching seven figure prices at auctions today. Why did they emigrate and what were they looking for in Paris ? What happened to their works ? And who is collecting them? All answers on Monday the 14 th at 6.30 pm, (9 avenue Matignon, Paris 8)