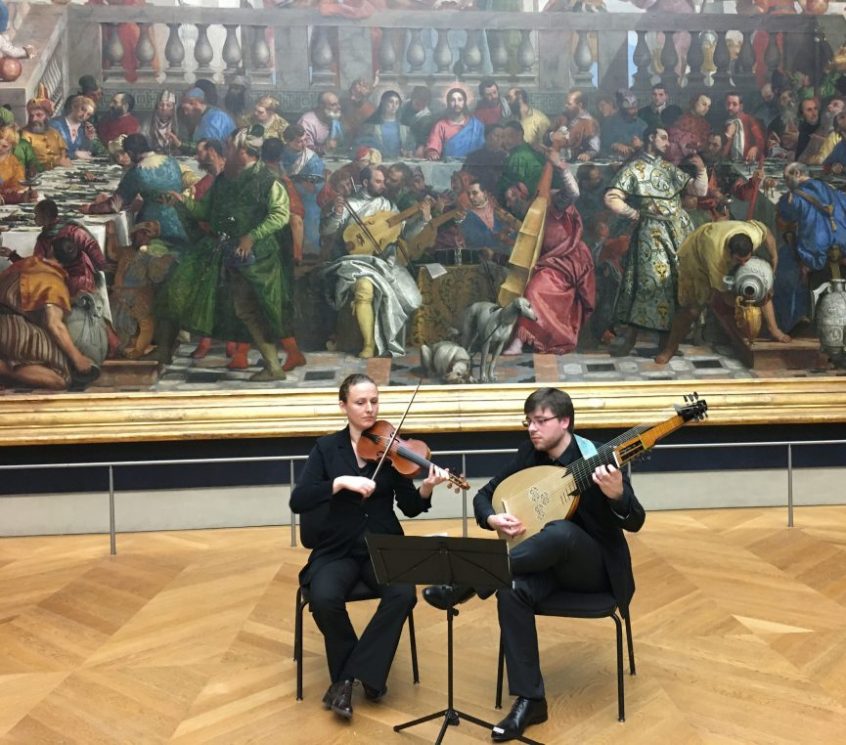 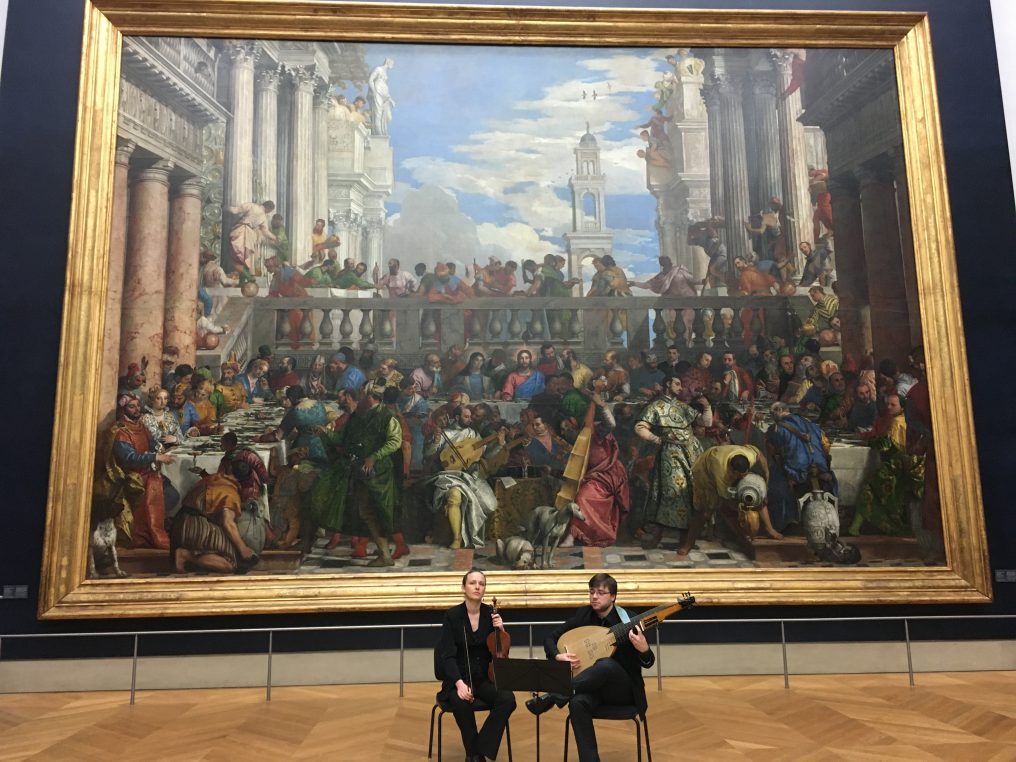 Céline Martel and Victorien Disse in front of “Wedding feast at Cana” by Paolo Veronese.

A few hundred members of “Les Amis du Louvre” were brave enough to walk through Paris in the middle of the strike, to honor the invitation, last Tuesday night when the museum was closed, to a private visit of the new “Salle des Etats” where Mona Lisa is exhibited. The huge room, painted in a combination of midnight blue and black layers, is spectacular and sees between twenty and thirty thousand visitors a day!  Facing the small Leonardo portrait, is the impressive “Wedding at Cana” (9,94 m by 6,77 m) by Paolo Veronese, which is the topic of Cynthia Saltzman‘s book, to be published in 2021 by Farrar, Straus & Giroux “Plunder: Napoleon’s theft of Veronese’s Feast”. It was originally painted for the Order of Saint Benedict in Venice to decorate the far wall of the refectory at San Gorgio  Maggiore. 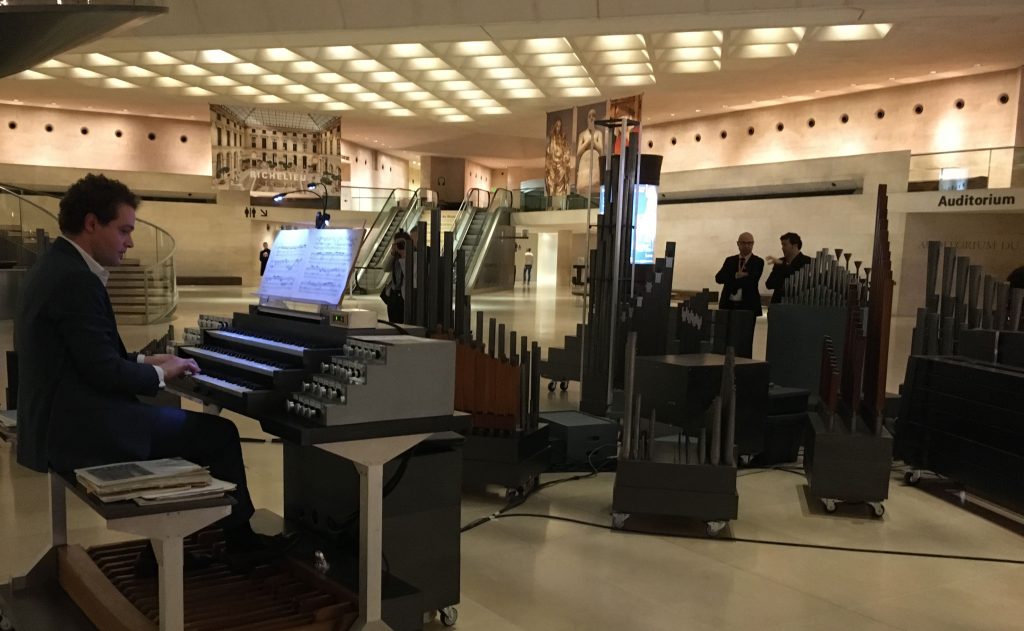 Jean-Baptiste Monnot plays his “Orgue du Voyage” under the Pyramid

Louis-Antoine Prat, President of Les Amis du Louvre, and Sébastien Fumaroli its “wonderboy” director, were welcoming the guests with organist Jean-Baptitse Monnot playing on the “Orgue du Voyage”, a portable organ which resonated fabulously under the glass Pyramid. He played Bach, Vivaldi but also Jean Guillou and his own improvisations as a tribute to Leonardo. The tone of the evening was set! as joyous and artistic. 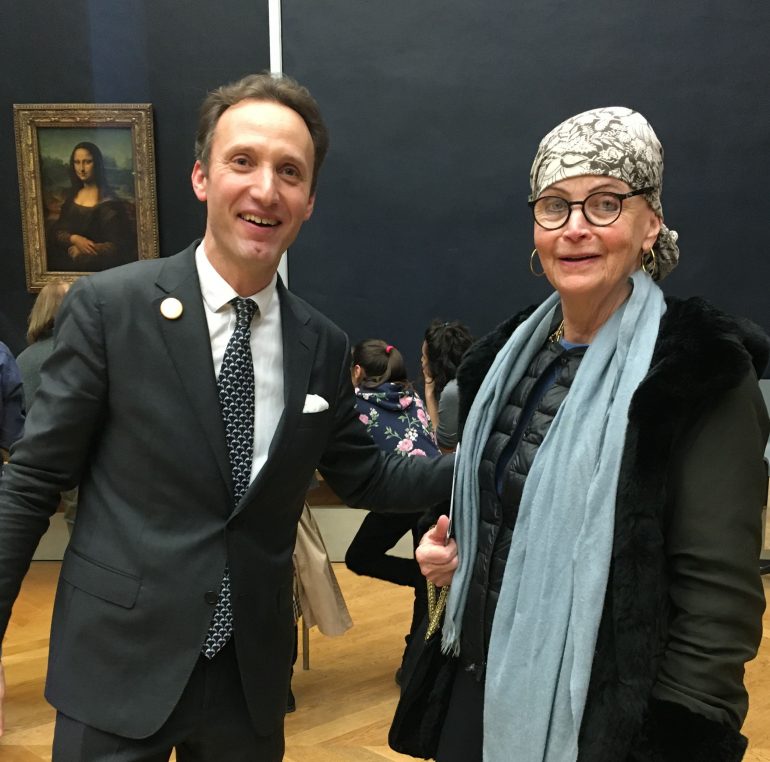 Sébastien Fumaroli and Isabelle Baer with Mona Lisa in the back

Then, one was invited to walk up the stairs and along the Grande Galerie to the newly restored salle des Etats, where Venetian paintings are majestically hung. This is where encounters were made with charming Jean-Paul Bouron, who directs operas and creates costumes for Versailles, a gentleman farmer Benoît Dupré who manages the model Farm of Viltain,  Emmanuelle Brugerolles, curator of drawings at Musée des Beaux Arts as well as Sabine de la Rochefoucauld, Chief of Protocol at the Louvre. I also spotted Ambassador de Laboulaye, who seemed very interested in the “Venus” painted by Dutch mannerist painter Lambert Zustris. 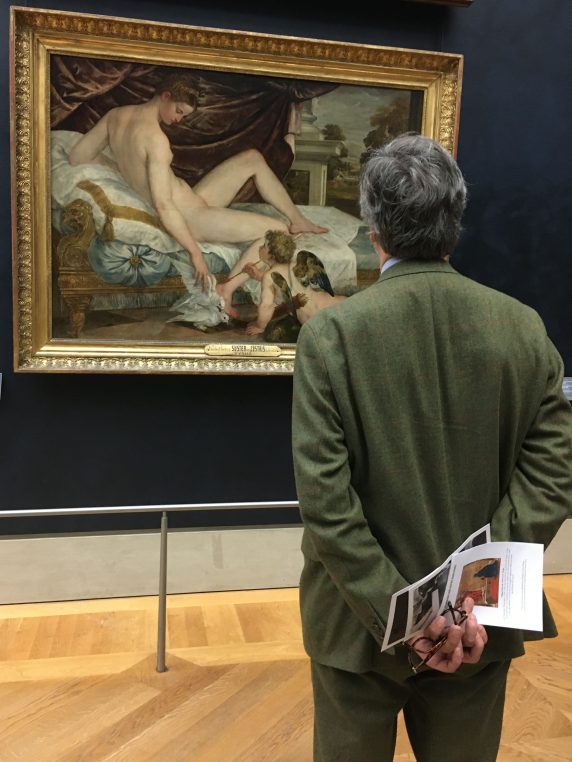 Ambassador de Laboulaye is very concentrated in front of Venus by Lambert Zustris, 1550

The salle des Etats is truly spectacular with a series of paintings by Titian and Tintoretto, and dominated by Veronese. Musicians from the Ensemble Giourdina were playing in front of the “Wedding at Cana” and thus echoing the musicians in the painting, which are said to be Veronese himself at the viola di braccio, Jacopo Bassano at the cornetto, Tintoretto and Titian. There was no need for champagne nor petits fours for everyone was “enchanté” by the museum itself and the fabulous paintings. 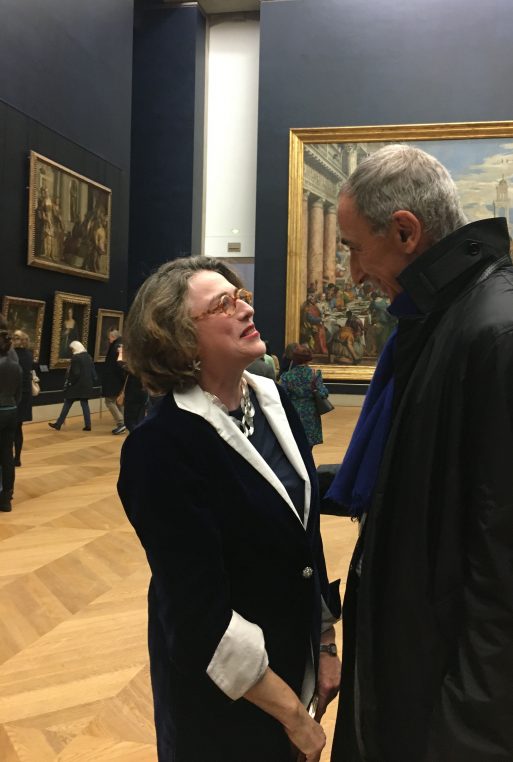 On the way out, we saw the bronze sculpture of Apollon Citharède, (zither player) from Pompei, (2nd or 1st century bc). Discovered in 1922, this androgynous statue always belonged to private collectors and is now for sale. The Amis du Louvre need to collect 800 000€ before the end of February to acquire it. You can send a contribution here. And buy Grande Galerie, the magazine of the Louvre edited by Adrien Goetz, which tells you all the news about the different exhibitions. 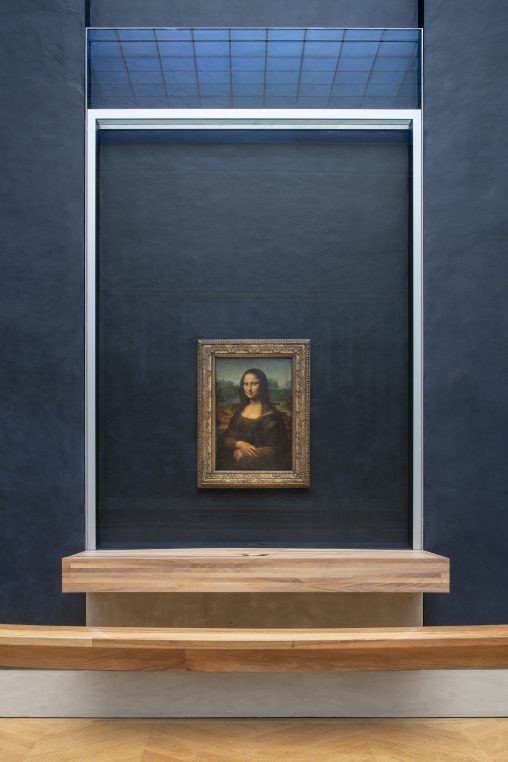 Société des Amis du Louvre  organizes trips to many countries and special evenings. Entrance to the museum is free with no lines if you join.

One Comment on “Alone, at night, with La Joconde”