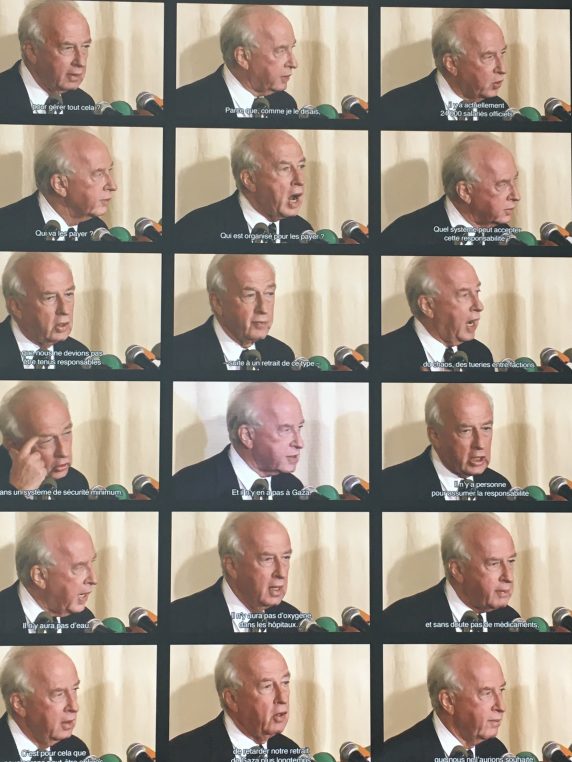 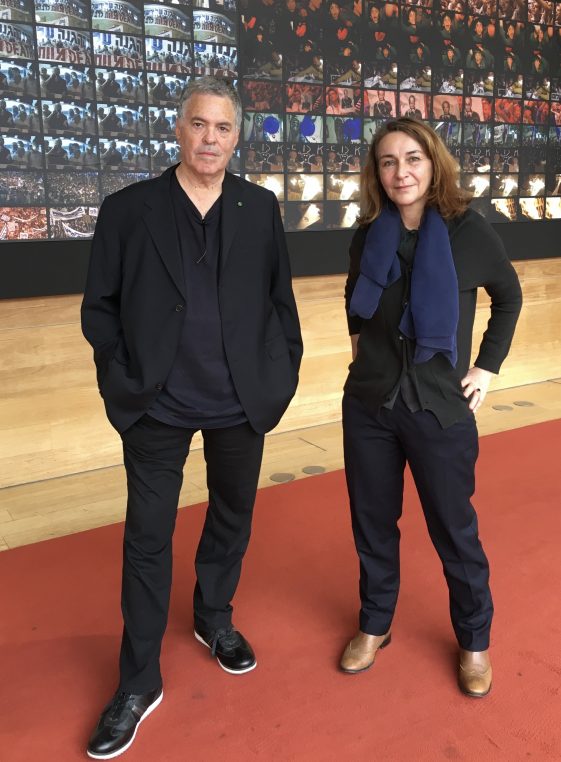 It was incredibly poignant to meet film director Amos Gitaï at Bibliothèque Nationale de France this week. A small group of journalists were invited to visit the new exhibition of his archives on Yitzhak Rabin‘s assassination on November 4, 1995. Films, interviews, a play and a book, and numeric archives, the result of 25 years of research, are being bequeathed by the great film director to the BnF in Paris. The day before the general elections in Israel where Benjamin Netanyahu was -again- running, Gitaï was particularly eloquent and political. It was a profoundly moving moment. The exhibition in the main alley, can be seen by all readers of the library, which remains open for students and readers. And most of these students will never have heard of Rabin who died on Shabath evening, November 4, 1995, many years before they were born.

An extract from the film, “The Last day of Yitzhak Rabin”, 2015, shows the Prime minister giving a speech

Amos Gitaï expresses himself in four languages. Hebrew his mother tongue, English the language he perfected while studying at Stanford University and later at Berkeley in architecture, French which he spoke between 1983 and 1993 during his Paris years and filming. His father, Munio Weinraub-Gitaï, was an architect from the Bauhaus who worked with Ludwig Mies van der Rohe and left Germany in 1933 for Switzerland. He then went to Israel where he met his mother, Efratia Margalit, the intellectual daughter of early XX th century Russian settlers in Palestine. A strong woman, she forced him to add the Hebrew translation (Gitaï) of his name (Weinraub) which means worker in the vineyard. Amos first studied architecture in Haïfa but after being wounded on a helicopter in the Golan during the Kippour war, on his birthday, October 11, 1973, he decided to become a cinematographer, to witness all events with a camera. 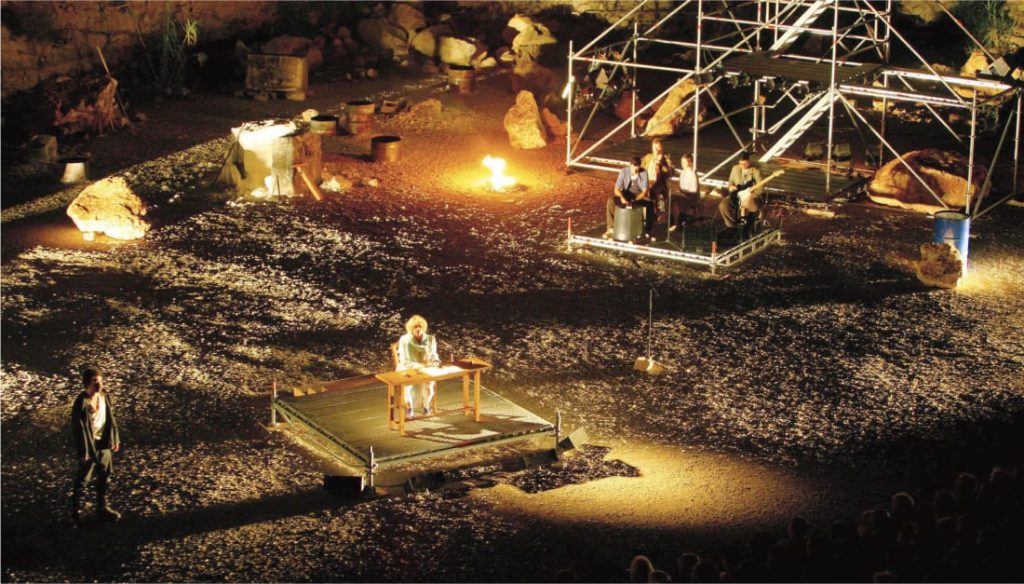 His grandmother and Rabin’s mother were friends and fought for the creation of Israel side by side. The families remained close. He was on Rabin’s flight to the US in May 1994, when Bill Clinton invited him to discuss further the Oslo Accords signed in 1993. In October 94, Rabin, Perez and Arafat received jointly the Nobel Prize for Peace. The Prime Minister had hoped to discuss this peace process with Gamal Nasser in 1952 when he took power in Egypt. He had to wait for 40 years.

During two years, while the Peace accords were being signed, unrest started in Israel with Benjamin Netanyahou taking part in the demonstration where a poster of Rabin dressed in a nazi uniform and a coffin bearing his name were being carried around. In the exhibition, pictures of BIBI as he is now called, in front of the coffin are particularly shocking.

Yitzhak Rabin was killed by four bullets by Yigal Amir, at a demonstration of hundreds of thousands of people supporting him in Tel Aviv. In the film Gitaï uses a mix of amateur films from the event and a reconstitution of the murder featuring actors. A Din Rodef was pronounced against Rabin by three rabbis. The way the film is edited makes it a very dramatic and intense and the very in-depth enquiry is fascinating. 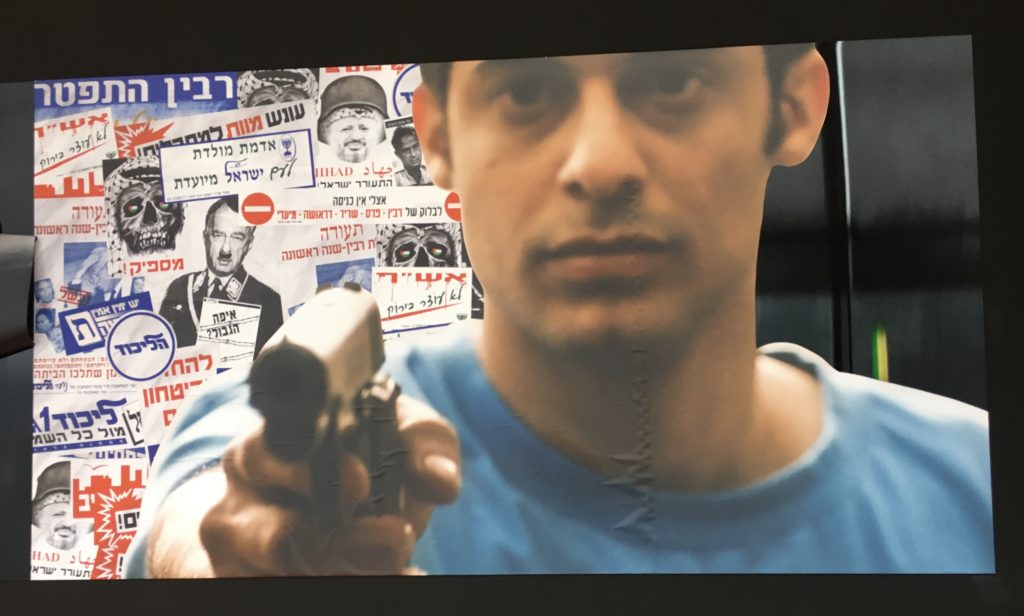 Yigal Amir, the ultra-orthodox extreme right killer is played by Yogev Yefet in the film

The exhibition consists mostly of photographs and sounds from the films like Jeanne Moreau’s recording of his mother’s letters… Some three dimensional models are added on the walls with cut outs and beautiful portraits of Leah Rabin who died from lung cancer in 2000. What is most interesting are the panels explaining the chronology of events which marked so strongly the life of Israel and the Palestinians. 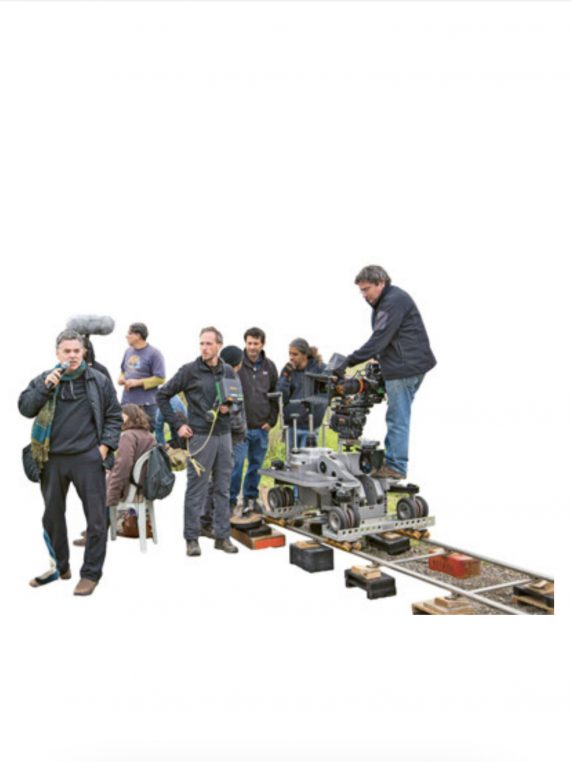 Amos Gitaï at work on the film

Amos Gitaï has shot over 45 films, documentaries and fiction, has directed Juliette Binoche, Natalie Portman, Hanna Schygulla, Barbara Hendricks, Léa Seydoux… taught film at Collège de France and at Columbia University. He has written plays performed in Avignon in 2016, at Lincoln Center and at the Philharmonie de Paris. And directed Verdi’s “Otello” at Teatro di San Carlo in Naples. He opened a museum of architecture in Haifa which carries his father’s name. He is represented by gallery Thaddaeus Ropac for his art work.

Because he considers archives as a living material essential to understand the truth about our society, he thinks that memory can change our daily lives and is particularly focused on studying how a public event can be transposed into art. Most of his films have been coproduced by French companies and he has worked with many French actresses. He lives between Israel and Paris. 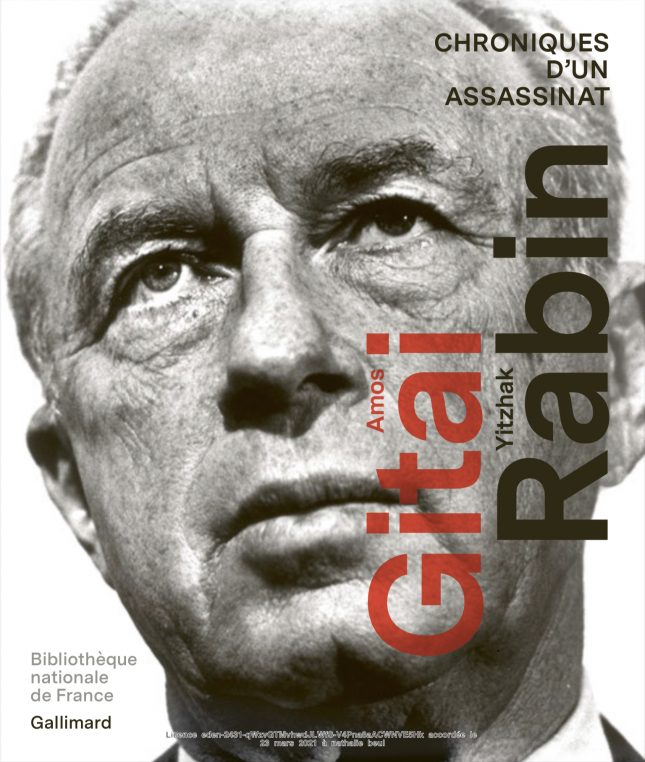 He has given some archives to the National Library of Israel and to Stanford University before, but for security reasons, he chose Paris for this most important body of works, 30 000 pieces devoted to Yitzhak Rabin. He wants them to be preserved and accessible to everyone including Israeli researchers, something he believes would not be the case in Israel where he has often been censured. 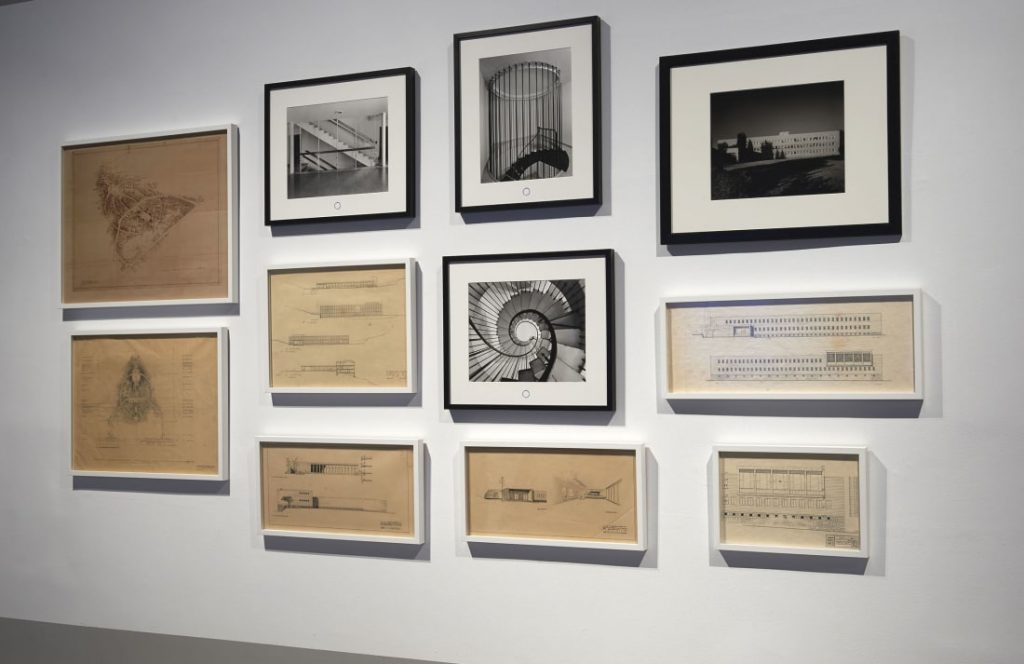 His films are available on the web or in DVD and the new book published by Gallimard and BnF, “Amos Gitaï. Yitzhak Rabin. Chroniques d’un assassinat” (28€) is just out in French but not yet translated into English. It contains many pictures from the film and questions the different ways of rendering such a dramatic event through stage, film, poetry and exhibition. The exhibition is at BnF until November 7.

One Comment on “Amos Gitaï and Yitzhak Rabin, a 25 year long story”