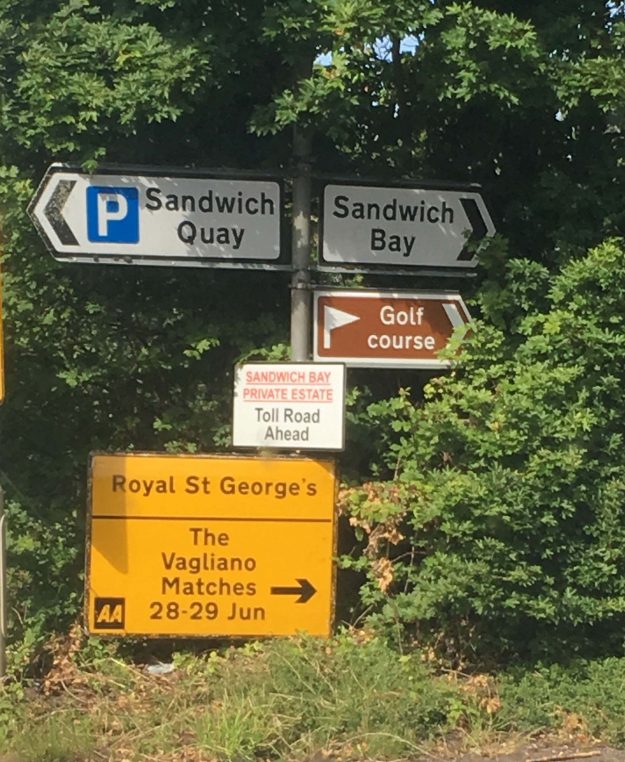 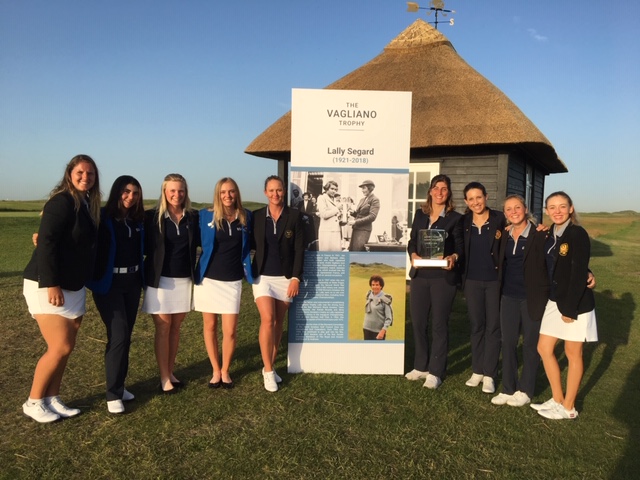 Royal St George’s first accepted lady members only four years ago, so it was a very unusual sight to see the terrace of the famous Sandwich golf club in Kent, swarmed by young pretty girls for the Vagliano Trophy, a tournament founded by André Vagliano in 1931. It started out as a French British match play and now includes young women from the British Isles and Ireland who play against the Continent. For the seventh time in a row, the Continent won the biennial event, but all 24 matches were fiercely disputed with extraordinary golf, including very young players. The Junior Vagliano trophy was equally beautiful to watch. 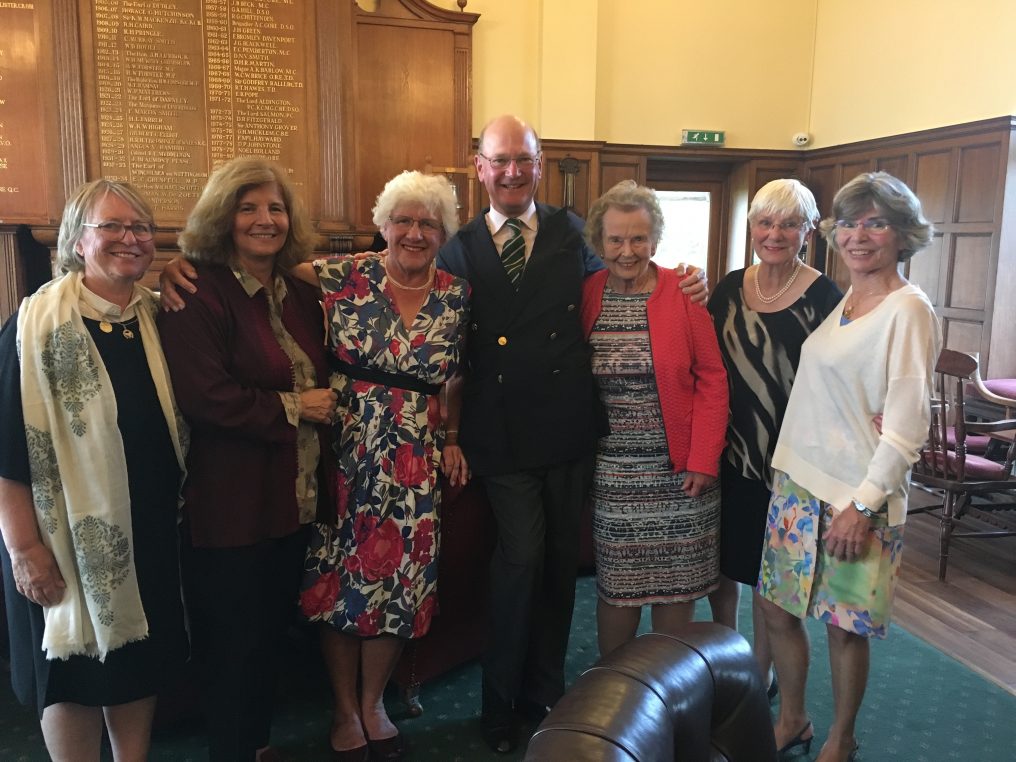 Eleven years ago, when he was Captain of Royal St George’s, Pierre Bechmann had seeded the idea of inviting the Vagliano Trophy. Little did he know that it would be such an incredible feast with the most beautiful weather and many former competitors coming from France and the north of England. The level of play was extraordinary with Albane Valenzuela, Emily Toy, Frida Kinhult, Emma Spitz, Pauline Roussin-Bouchard and 13 year old Francesca Fiorellini, all amateur champions, who brought ravishment to our eyes. Alessia Nobilio had a hole in one on the Saturday morning.

All players and spectators alike remembered Lally Segard, the founder’s daughter, who won the Young British at 16 and the British Amateur at 39. She was an extraordinary champion. As captain of the teams, she always insisted on the girls developing friendships and keeping their good manners on the course. 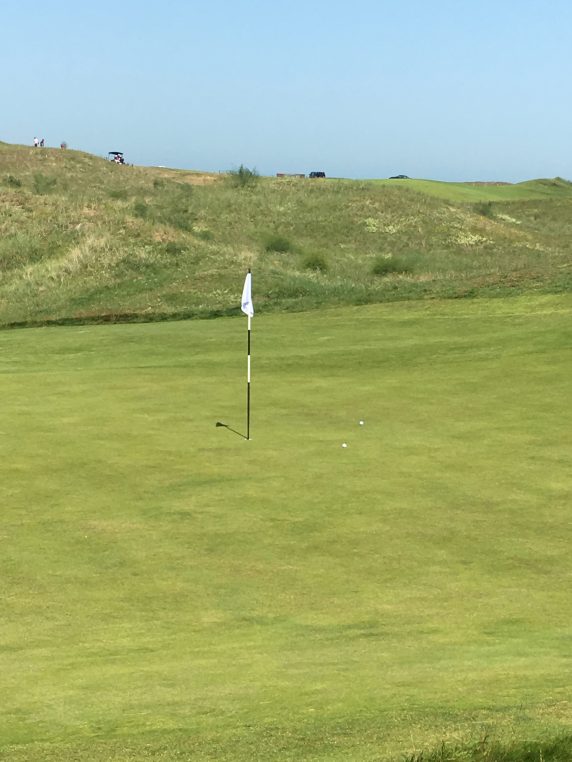 All players were incredibly talented with their chips to the pin!

This is a philosophy that Linda Bayman, a four times Vagliano competitor, has always professed. As one of the rare Royal St George’s lady members, she was part of all events of the trophy. And from her unique house, located on the fourth green, one could watch the gardeners mow the green as early as 6 °clock. 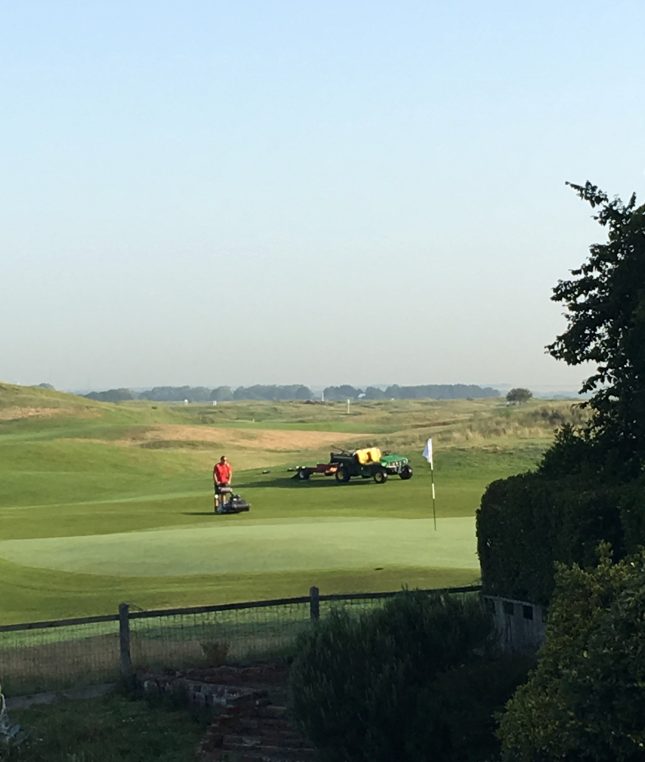 Mowing the fourth green at 6 am

The whole club was focused on these young ladies’ happiness and the green keeper Paul Larsen (a former Rock music bass player), certainly did a good job with the drought which had hit the south of England. Men members had given up their locker rooms with six beautiful green showers and it was extraordinary to see the joy of all personnel. Head Pro Justen Fiddler could not have been nicer in his shop already filled with the 149 th Open’s (to be played next year) caps and accessories. And the head chef George Chadwick served us the best fillet of beef and Pavlova pudding. 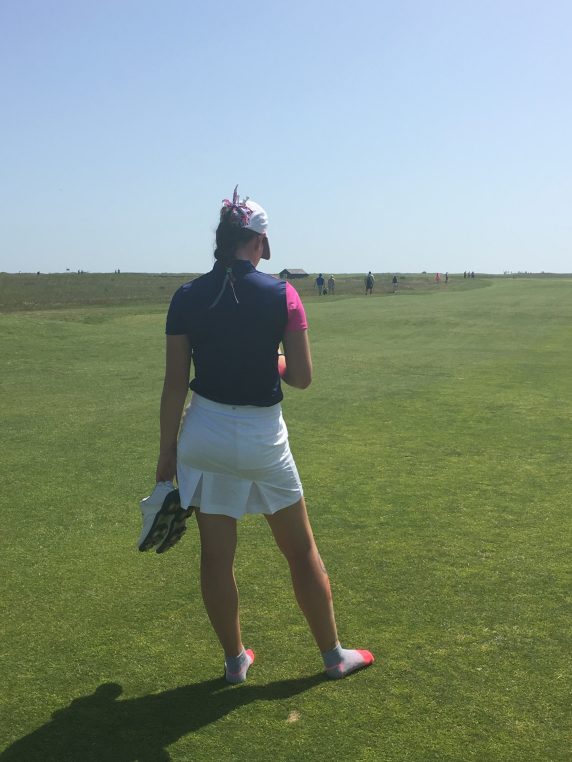 The British and Irish team were definitely more elegant

There were two holes in one on Saturday morning and innumerable birdies and eagles. These girls who range in age from 13 to 21, drive from the back tees in the wind and manage to reach par fives in two! They are phenomenal. Some of them are still in high school, others will join American campuses this fall like the amazing Pauline Roussin-Bouchard who starts at Duke in August and Alessia Nobilio who goes to UCLA. 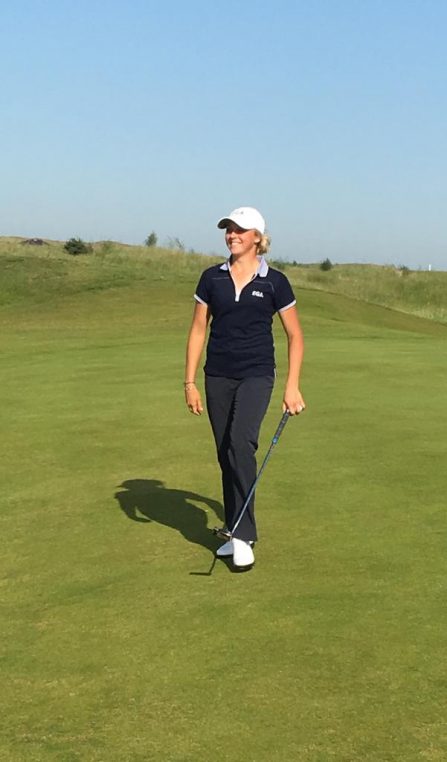 Playing the day after was probably the most humiliating experience when I realized that I drove 90 meters short of these young prodigies. But the excellence of the welcome was a memorable moment, including members walking their dogs on the course and feeding them sausages at the 12 th green. Now that Muirfield has accepted its first Lady members, golf in Great Britain is learning to love skirts on the course. 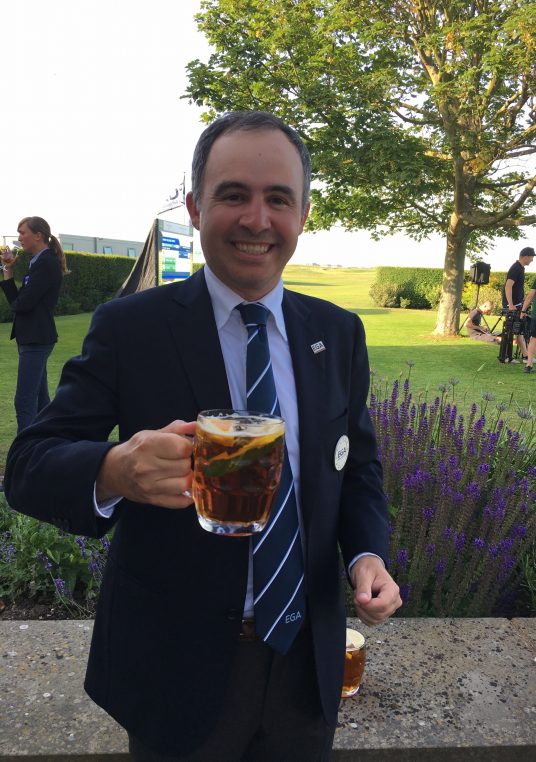 A very happy Stefano Sardi from EGA, celebrating Europe’s victory with a pint of Pimm’s

What is unique in this sort of amateur event is that you get to see them play from close up. You can stand by the green and look into their golf bags to see what clubs and putter they use, watch their swings in detail. Most girls were incredibly relaxed, taking their shoes off, on the course after the game, painting flags on their cheeks and tying national ribbons around their hair which they all carry very long. None of them seemed to like to keep the pin in the hole even for very long putts.

The next edition of the Vagliano Trophy will be in Lausanne in 2021. In the meantime, Albane Valenzuela, the only Swiss member of the team, will have played for the second time in the Olympic Games and might have turned professional after she completes her political degree at Stanford University. She was in the finals of the U.S. Women’s Amateur. 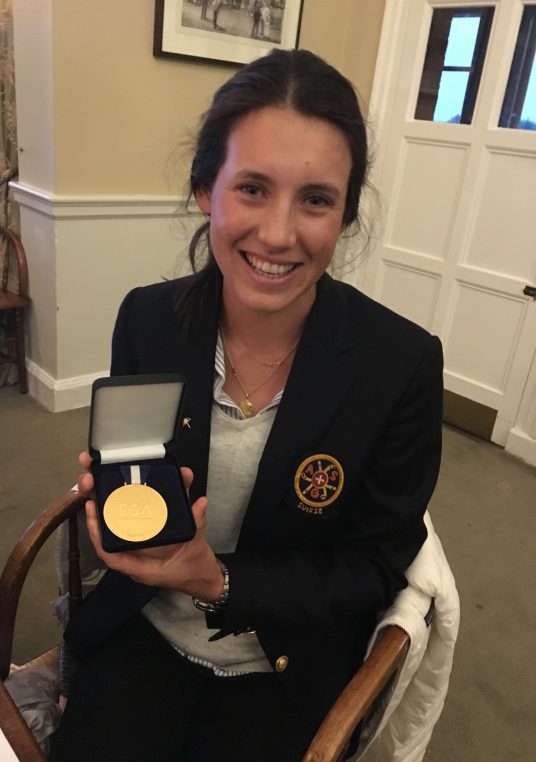 Born in the US from Mexican and French parents, she has lived in Geneva since she was 14.  The speech in faultless English she gave when she was awarded the EGA gold medal, was so mature that everyone was left speechless. Her French and Spanish are equally flawless. Her elegant swing and her beautiful attitude reminded us all of Lally Segard’s style. She has already played in many professional Opens. 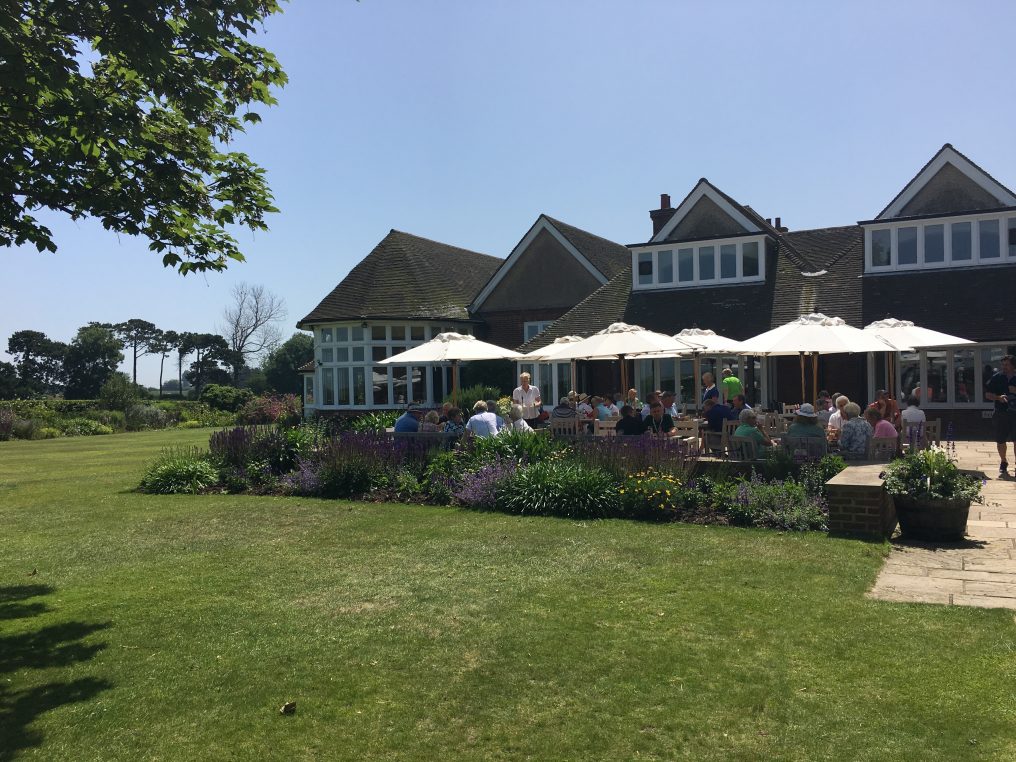 Next year, Royal St George’s will host the 149 th British Open. It will certainly be less casual and very crowded… From 1 to 4 August 2019, the Women’s British Open will take place at Woburn and a few of these young Vagliano Trophy girls will take part in it…

5 Comments on “An all women event at Royal St George’s! What a feast.”