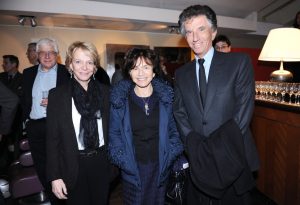 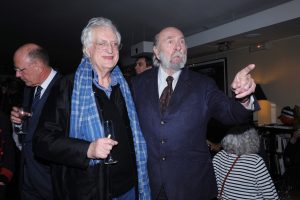 The evening at Cinéma Le Panthéon was fun and seeing Jean Rochefort, Jean Pierre Marielle and Bertrand Tavernier celebrate their producer, Michelle de Broca, was a moving moment of cinema. At the invitation of Frédérique Bredin, President of CNC, Centre national du Cinéma, they were all celebrating forty years of movie making with the screening of a historical film « Que la Fête commence » set in France and Britany just after Louis XIV th’s death. But also remembering a time when actors were having a ball on each film they shot. Especially those actors ! And former culture minister Jack Lang, was as gracious as ever, talking about Frédérique Bredin who started her career at his ministry and his current project, IMA, the Institut du Monde Arabe, and Woody Allen’s recent visit there with his daughters. 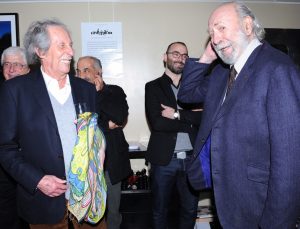 We missed fabulous Philippe Noiret who died 8 years ago, but the spectacle of seeing Alexandra de Broca (wife n°2), stunning in her tight pants and high heels, walk hand in hand with Philippe de Broca’s first wife Michelle, was very moving. The Pantheon cinema, which shows mostly old films a few steps down from the Sorbonne, is confortable and the 200 seat theatre was packed with every producer and film director France can count. Patrick Cacheteux, our host, who has designed a great lounge upstairs, was discreetly watching, while guests ate mini burgers and nems in this very 70’s decor. 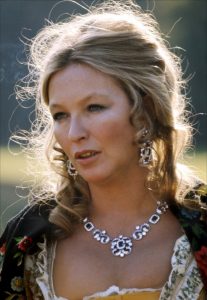 Everyone was talking about the Cannes film festival, which is fast approaching and Marina Vlady, Danielle Thompson, Tonie Marshall, Véronique Cayla, president of Arte television, were listening closely to the remarkable presentation, Christophe Tardieu made of Bertrand Tavernier’s career and his difficulties in finding money for good films ! It felt like movie making was still an art and not an industry !