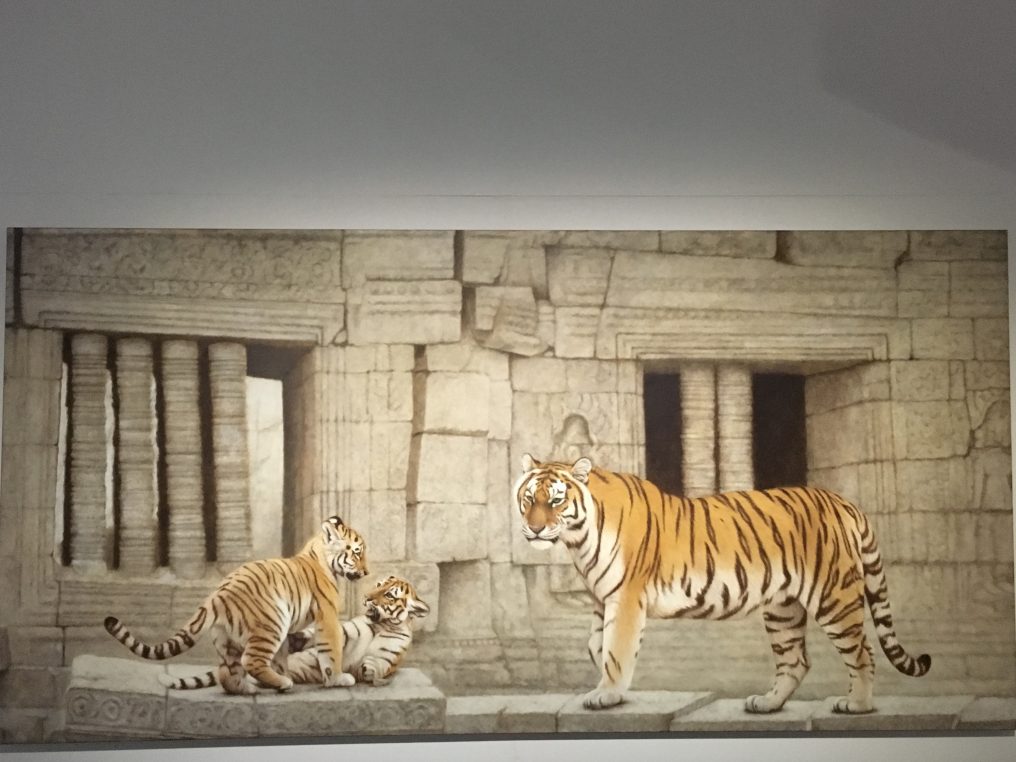 I am not particularly interested in animal sculptures and paintings although Antoine Louis Barye and Jean Baptiste Oudry have always fascinated me at Château de Chantilly. But I was curious to find out at Atelier Grognard, in Rueil Malmaison, if there were good animal artists today. The new show nextdoor to Joséphine de Beauharnais’ house, was inspired by Danielle Beck who invited her artist friends in this modest but very realistic show of ten sculptors and painters and one photographer.

Talking to Patrick François who only paints animals that he finds in his village near Vichy or in local zoos was interesting. He spends half his time in zoos or crocodile farms and in the forest where he finds horses and boars. His other occupation is to paint commissioned people’s portraits. He only uses oil on wood and sometimes adds iron plates or nails. I particularly liked his “Perched Makiese”, an animal from Madagascar. the variety of his work is impressive.

Michel d’Oultremont is a young Belgian wildlife photographer who is showing birds but has travelled the world in search of rare shots. All his photos are printed on aluminum and thus have as special reflection and poetry. 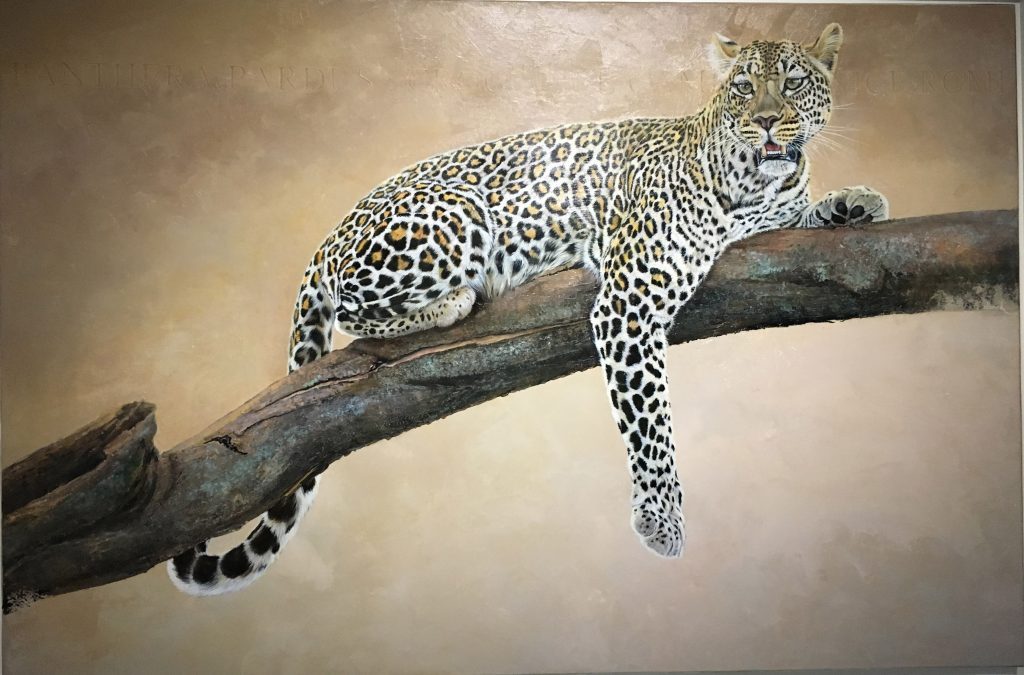 Danielle Beck, portrait of a jaguar

Rémi Bourquin has a series of fabulous paintings of tigers in Jaïpur, Madras and Irawan and also of polar bears. The only abstract painting was “Hunt” by  Bernard Frigière who also sculpts charming little octopuses and eels in bronze.  And Franz Bodo , probably the most prolific of all artsits here shows a porcupine and a rouge gorge in acrylic on linen which are very large and quite gripping. He has a whole range of cows, geese and chicken.

The most intriguing works  were a pair of ostriches by Philippe Tallis, who also sculpts abstract animals. 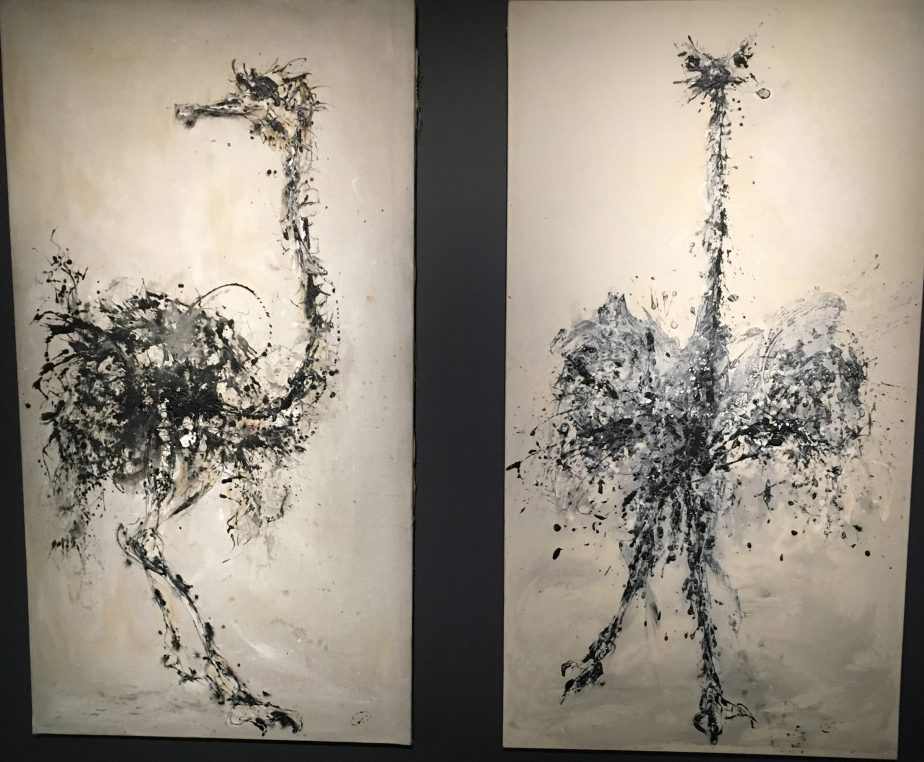 Philippe Tallis, Ostrich looking back and Ostrich facing us, acrylic on canvas

The very young new director Claire Maurer-Montauzé who used to run the Museum of Knives in Thiers, was there introducing each artist. She is dynamic and will certainly give a new life to the space.

I thought while driving back to Paris that you needed a shooting lodge in Africa or in Sologne to hang all these paintings.  But why not have one’s portrait done by one of these patient animal seekers… 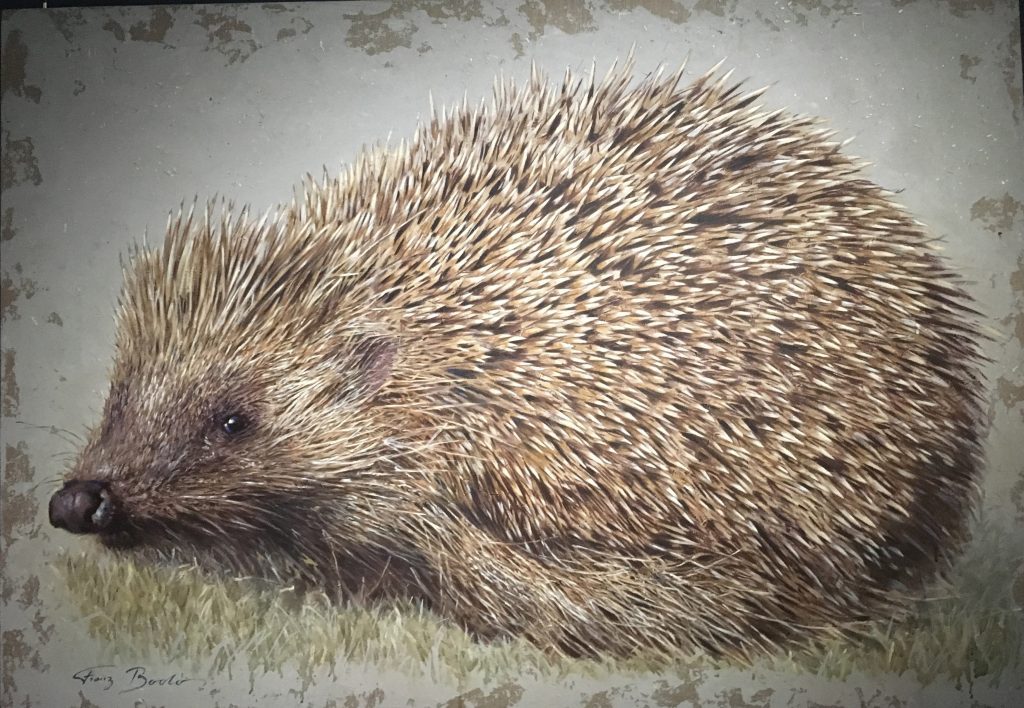 Atelier Grognard until December 9. Another exhibition on “Gardes Suisses” (the 200 Swiss guards of the French King since 1616) is taking place at the Mediathèque in Rueil until October 28. This elite regiment used to live in Rueil where they were very much liked, and stayed well beyond the Revolution until 1792.  And a new exhibition on Furniture with secrets, opens at la Malmaison on November 17.

One Comment on “Animal painters can also do people!”