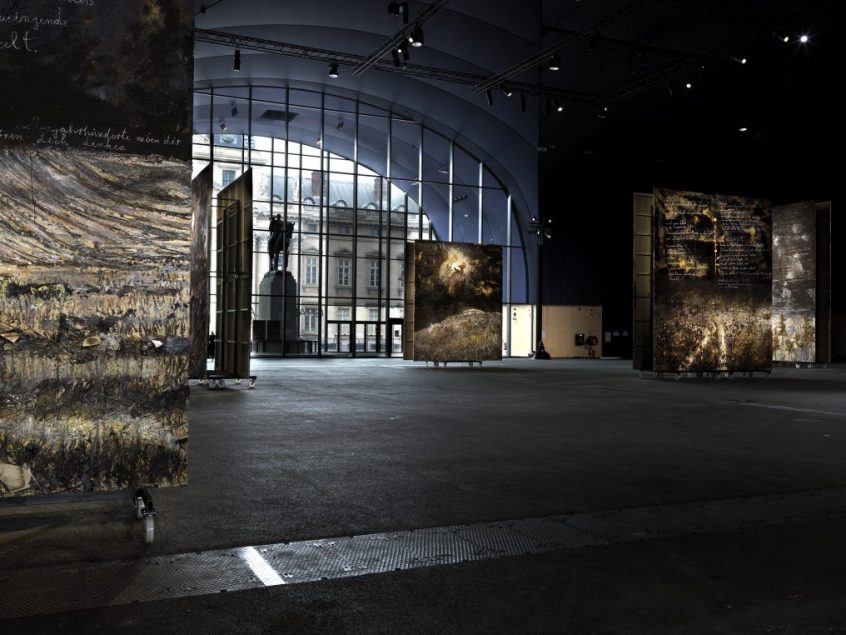 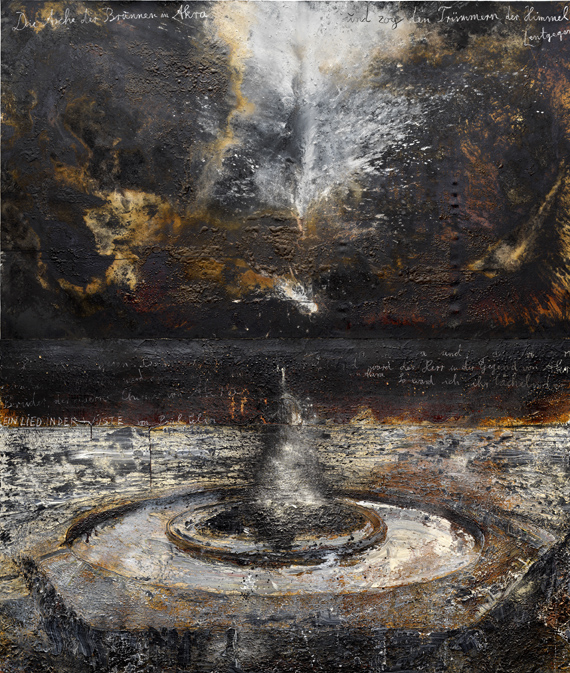 When I met him at Daniel Templon’s decoration, Jean Michel Wilmotte, the architect of Grand Palais Ephémère, advised me to go and visit the Anselm Kiefer “For Paul Celan” show, around 4 pm to get the best light of the day. Unfortunately it was raining when I went last Monday but I understood why the light was so important in the exhibition which takes over the 10 000 square meters of the temporary building on the Champ de Mars. This is probably the safest art gallery in Paris at the moment, and there are no lines! Fifteen years after his installation for Documenta at Grand Palais in 2007, Anselm Kiefer has become the most celebrated German artist in Paris. He created a specific work for the Panthéon a year ago and was chosen by President Macron as one of the works to open the French Presidence of the European Union this January 1, thus celebrating the Franco German relation. The artists works in France, in Croissy. 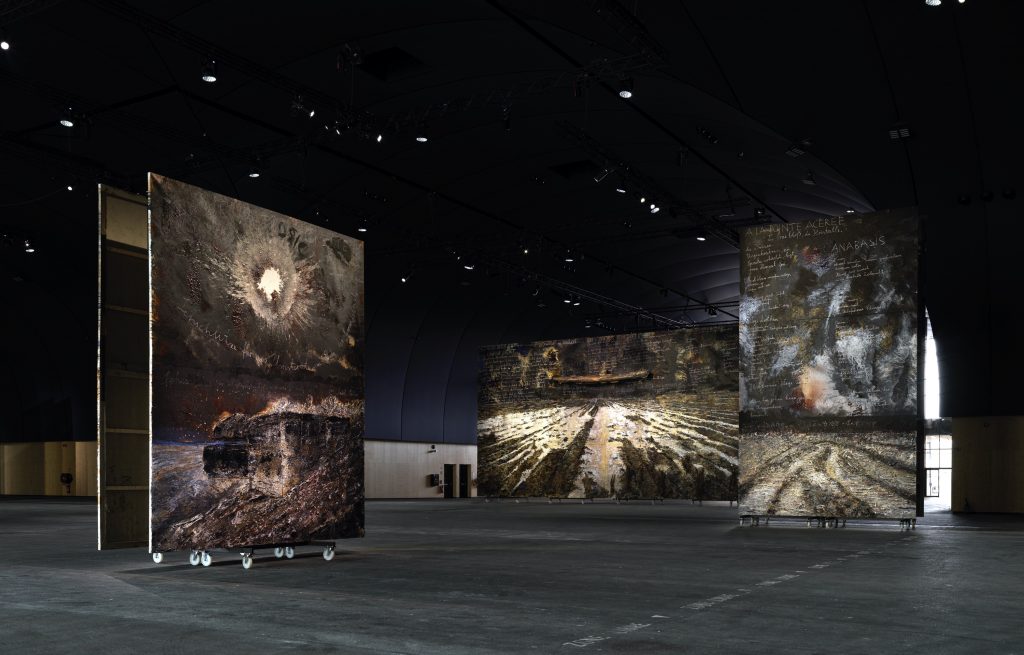 A general view of the show with its giant paintings

When you first walk into the Grand Palais Ephémère you are immediately caught by a strong emotion which comes from the dark and cold building and the strength of the works dedicated to poet Paul Celan’s Todesfuge, a poem on death. “Celan does not just contemplate the void,  he has experimented it, lived it, gone through it.” The paintings try to make Celan’s verses alive. It is particularly interesting to see these works inspired by the war in front of the Military school. 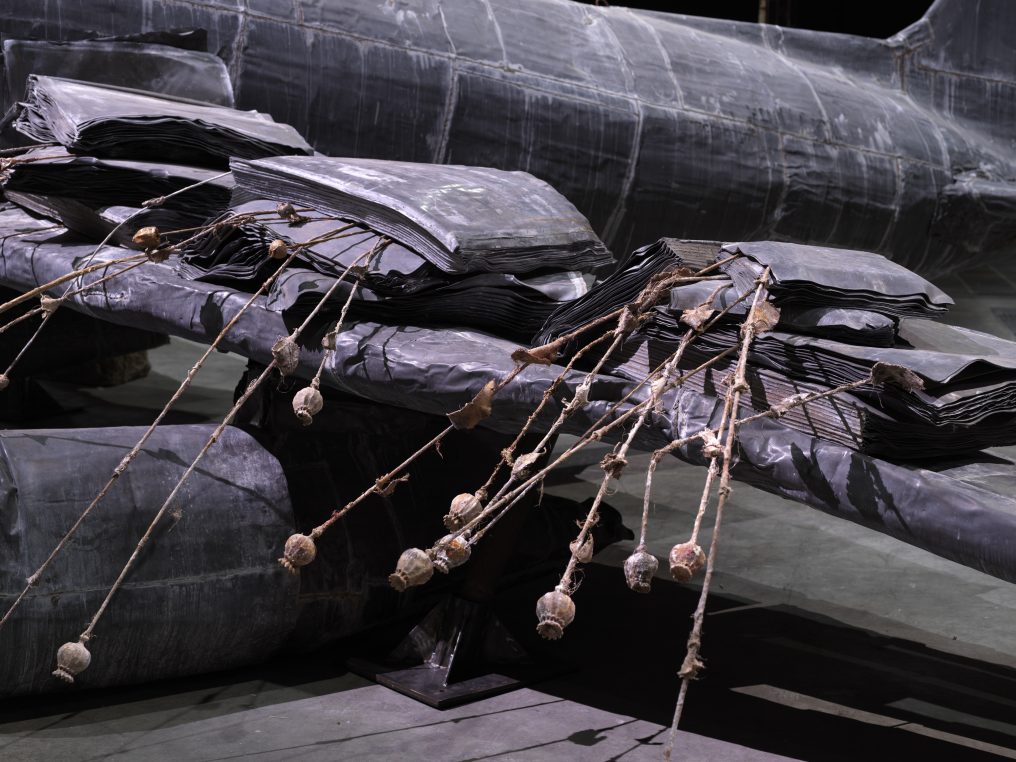 Born in Rumania, Paul Celan was interned in camps where his parents died and is considered as the greatest German language postwar poet. He became French in 1955, married Gisèle de Lestrange and taught at Ecole Normale Supérieure. He translated many French poets into German. Kiefer has worked repeatedly on his poems an considers himself as both French and German. 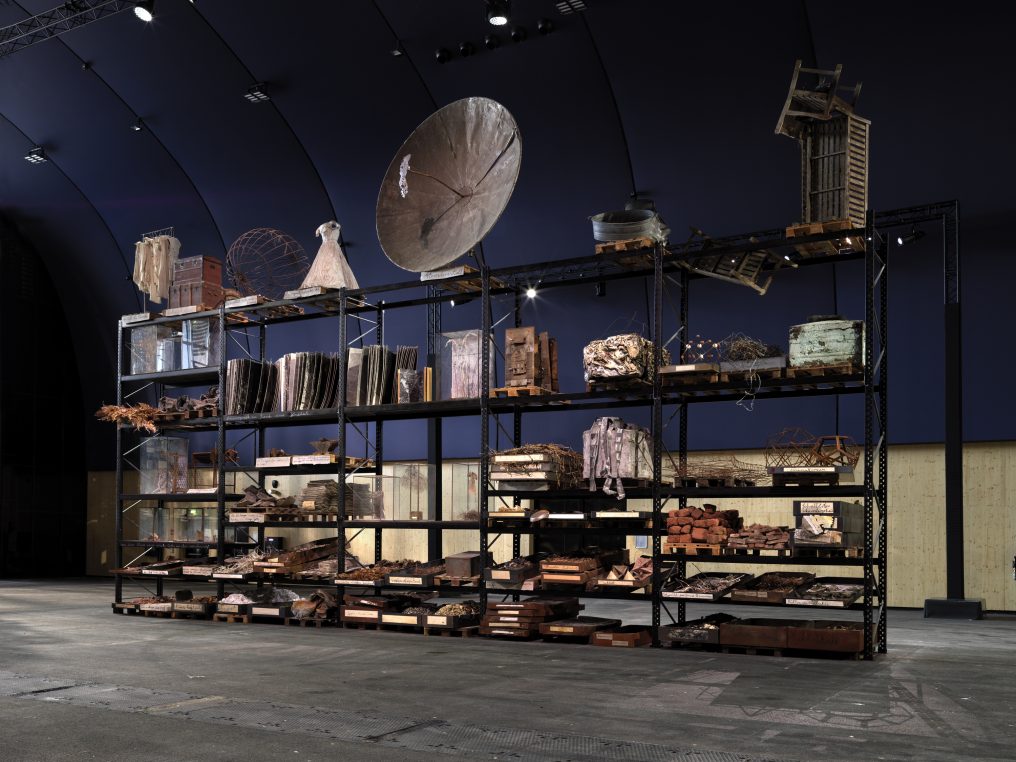 Kiefer uses many different materials which you can see from close up in the studio recreated in front of the Eiffel Tower. Dry flowers, poppies, glass, plaster, chalk, lead, ferns etc. are included in the acrylic and other painting material. The size of each canvas, one is 8,4m by 5,7m, adds to the drama of the theme. The title of the work is often written in chalk on top and his tribute to Madame de Staël’s work “De l’Allemagne” is renewed here after we discovered it at Centre Pompidou years ago. Two large painting showing golden ferns on a snowy landscape are directly inspired by Paul Celan’s poem “das Geheimnis der Farne”, (the secret of ferns) bring a very special light into our lives. 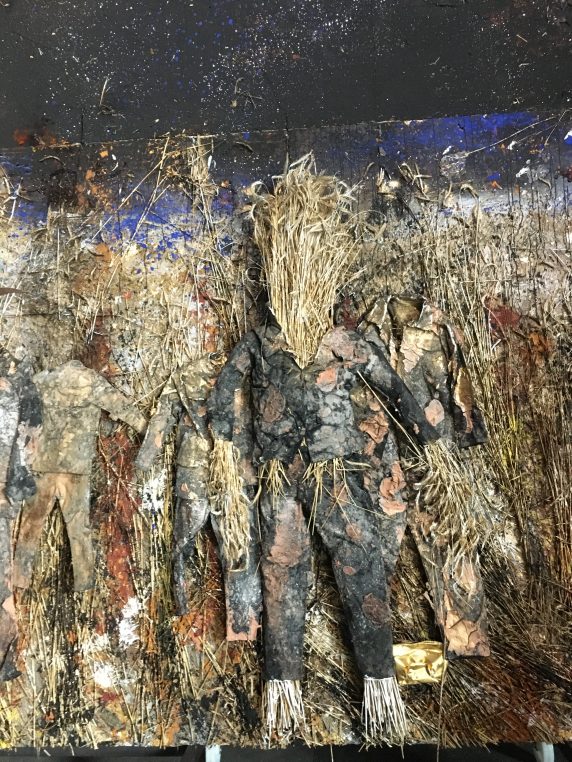 A close up of Denk dir-die Moorsoldaten, (Imagine, the soldiers in the swamps) 2018-2021, on the right at the entrance

Kiefer considers his studio as a labyrinth, a reserve of possibilities, and getting a chance to see it recreated here is great fun. He keeps his canvases on chariots with wheels and this is how they are presented here. He can there fore always work on them again, adding a few ears fo corn or gold leafs. The lead airplane is full of paradoxes: it cannot fly of course and the poppies which penetrate it are there to make us “remember” thanks to their hallucinogenic powers.

3 Comments on “Anselm Kiefer at Grand Palais until January 11, do not miss it!”