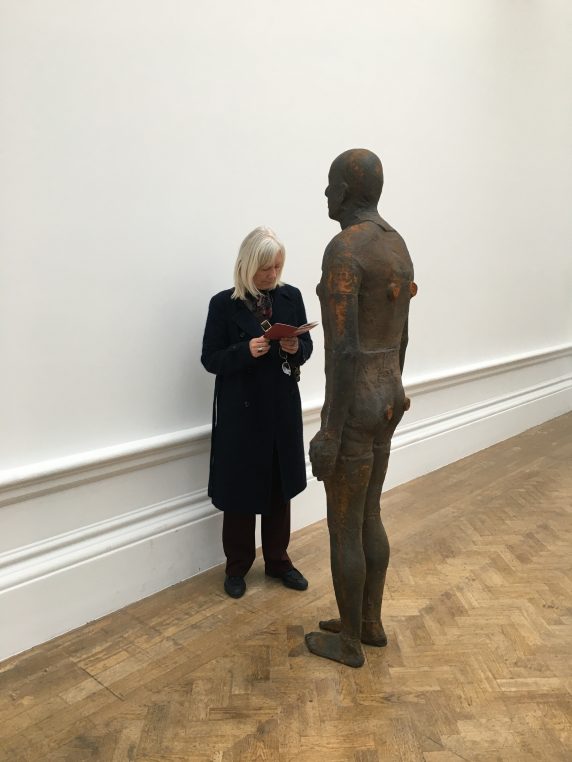 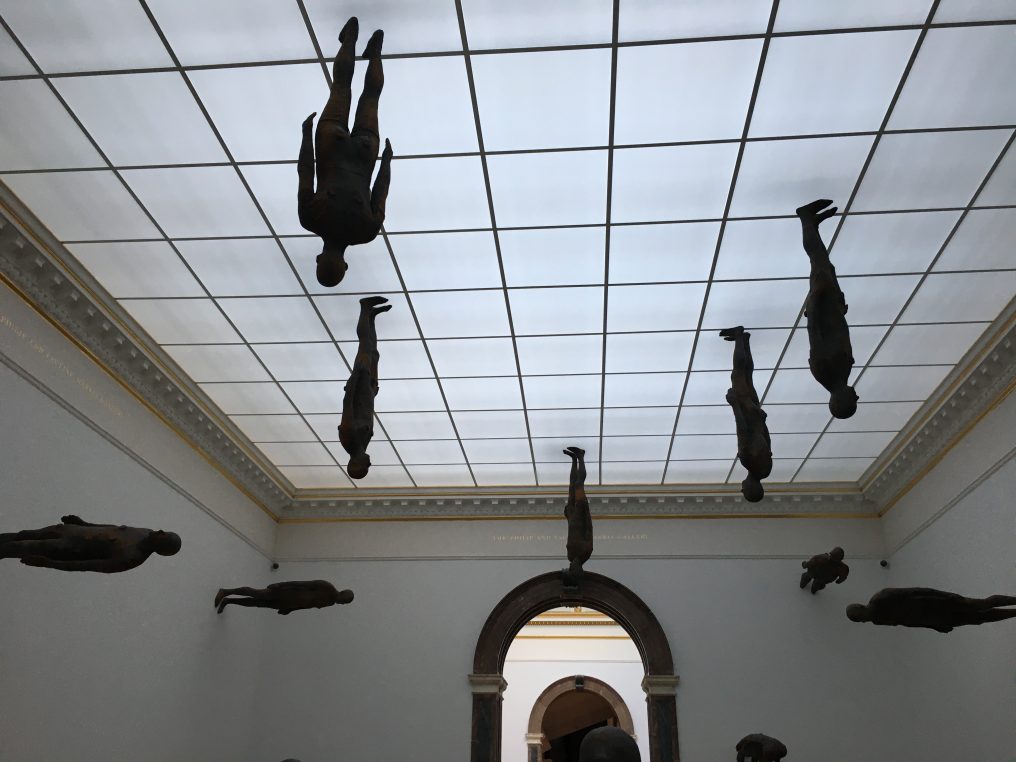 Antony Gormley, Lost Horizon, 2008, “Bodies project from all sides, at odds with one another”

Every time I travel to London, I try to have the same routine. From King’s Cross, I take the tube to Piccadilly, visit Hatchards book store, have lunch at Fortnum’s and visit the Royal Academy of Arts. And this time was particularly successful, for there were two admirable exhibitions: “Lucian Freud, The Self- portraits” (until January 26) and “Antony Gormley” (until December 3). Do rush and see them, they are both giant artists. 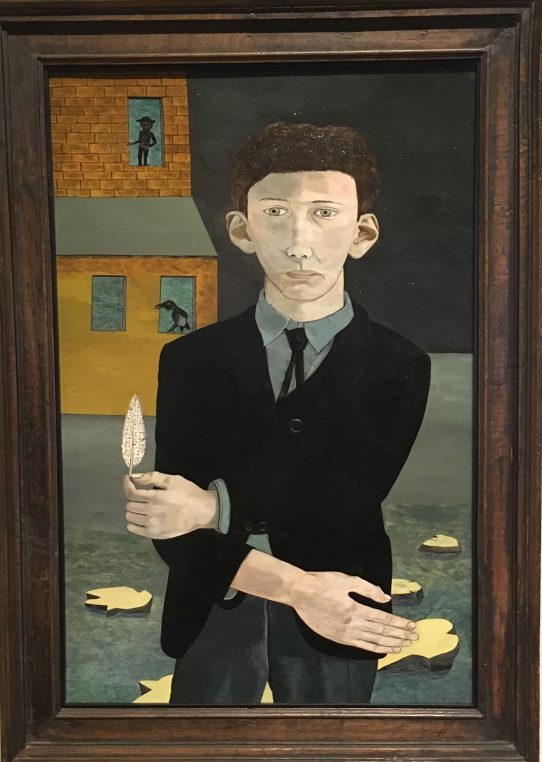 Man with a feather, (self portrait), 1943, Private collection

You might want to start with the Freud exhibition on the second floor, for it is small and can be crowded. We are lucky to see here Lucian Freud‘s early drawings from when he was a teenager. Born in Berlin in 1922, the grand son of Sigmund’s, he moved to London with his family in 1933. He did a self- portrait every decade, sometimes using mirrors or vegetation and “Still-life with Green Lemon”, 1967-68, is one of the more striking works in the show. 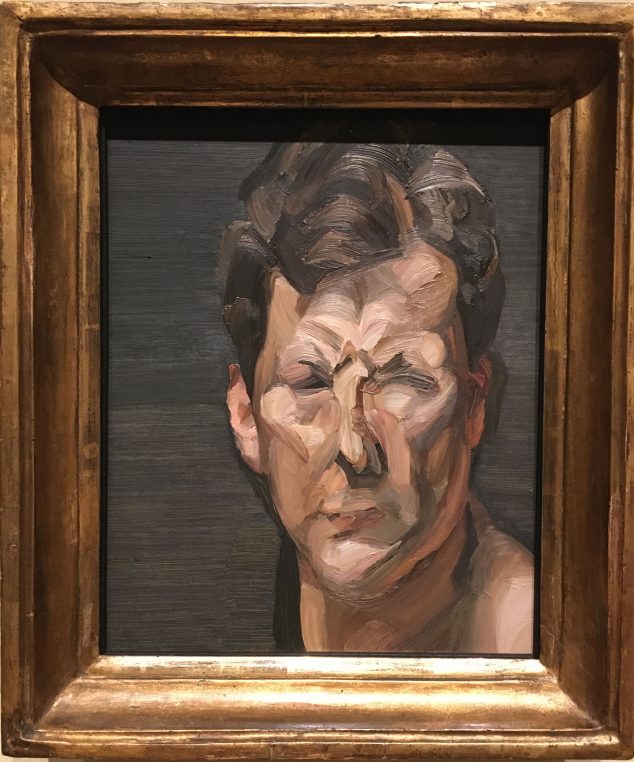 Starting with “Self-portrait”, 1940 when he attended the East Anglian School of painting and drawing in Suffolk, to a late “Self-portrait, Reflection”, 2002 where he appears in a mirror, his range of tools are fantastic. Drawings in pencil or in ink, prints, oil on canvas or on panel, watercolors, all are striking. Some were made as illustrations for a book on Greek myths, ores are very personal like “Hotel bedroom”.  They all show what a superior  artists he was. He died in 2011. 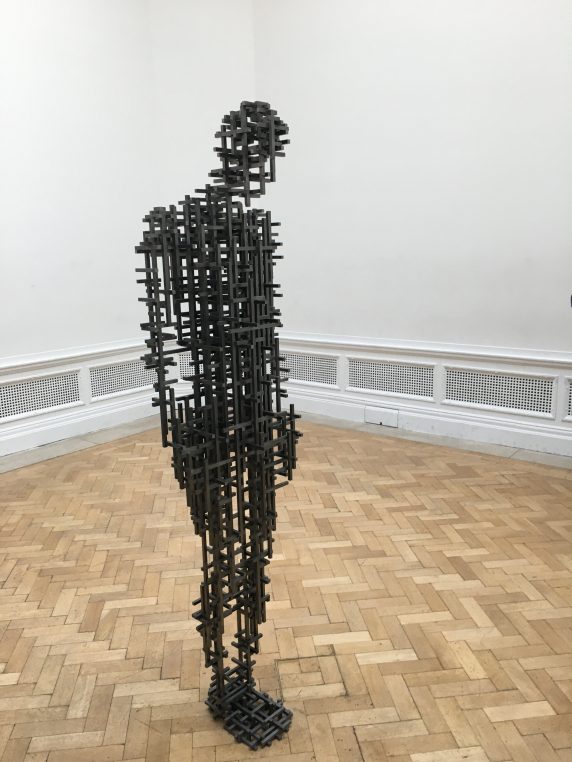 Subject II, 2019, steel bars, tests the boundary between the body and space

Antony Gormley, a long time passion of mine, occupies the large galleries downstairs and the numerous visitors seem to have so much fun running around his sculptures, that it is a joyful vision. He uses the male body, his own, to express his feelings. It is a “place of experience, of emotion, memory and imagination”. There is magic in this show which makes bodies fly around the thirteen rooms. Early works are shown, like this blanket with a body drawn with clay (1983), then a special room Clearing VII, shows a “drawing in space” of 8 kms of aluminum tubes coiled and expanding between floor, wall and ceiling. The visitor has to fight his own way around this spectacular sculpture and I had fun watching a poor mother pushing her baby throught it… 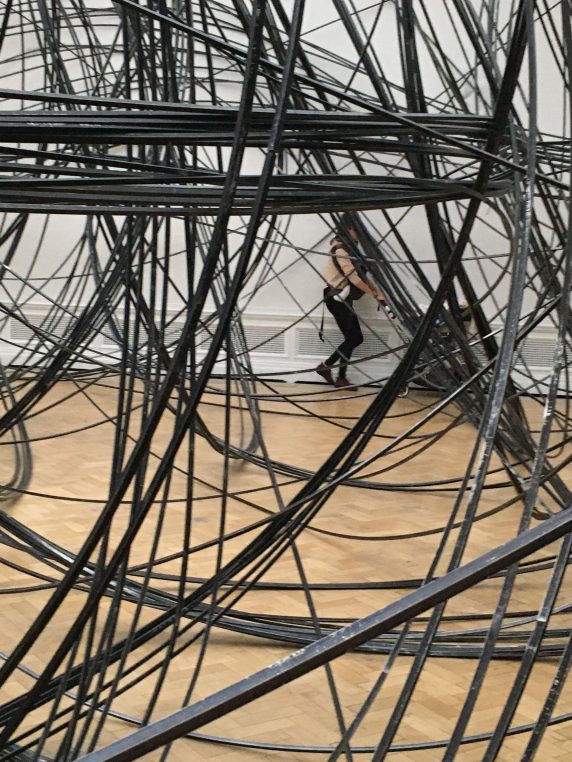 A mother pushes her baby through Clearing VII, 2019

My favorites are always his vertical steel men, “Subject II” which are in room 4 but his huge suspended cage called Matrix III, made of 6 tonnes of steel reinforcing mesh, is quite extraordinary, I have to admit, and so is his architectural “cave”, in the form of a hollow human form crouched on its side which you penetrate. It is very dark and you have to lean on the left side wall, to “experience interiorized darkness”. We feel our way relying on our senses to guide us through the sculpture. It is a similar experience to some of James Turrell’s. 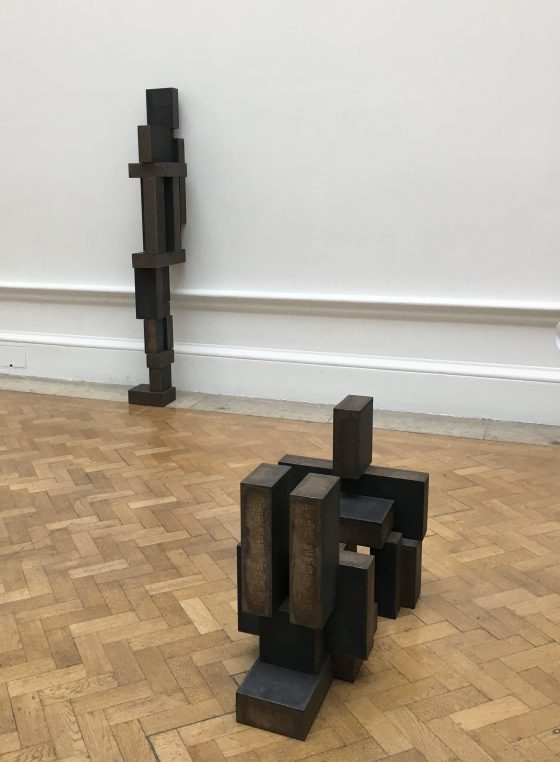 Antony Gormley until December 3 and Lucian Freud, self portraits until January 26, at the Royal Academy, London.

2 Comments on “Antony Gormley and Lucian Freud, a double bill at the Royal Academy”