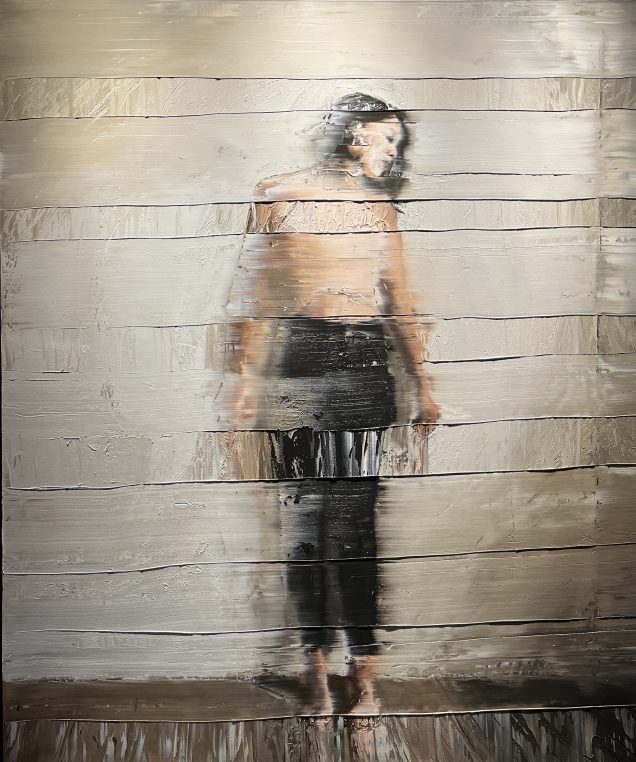 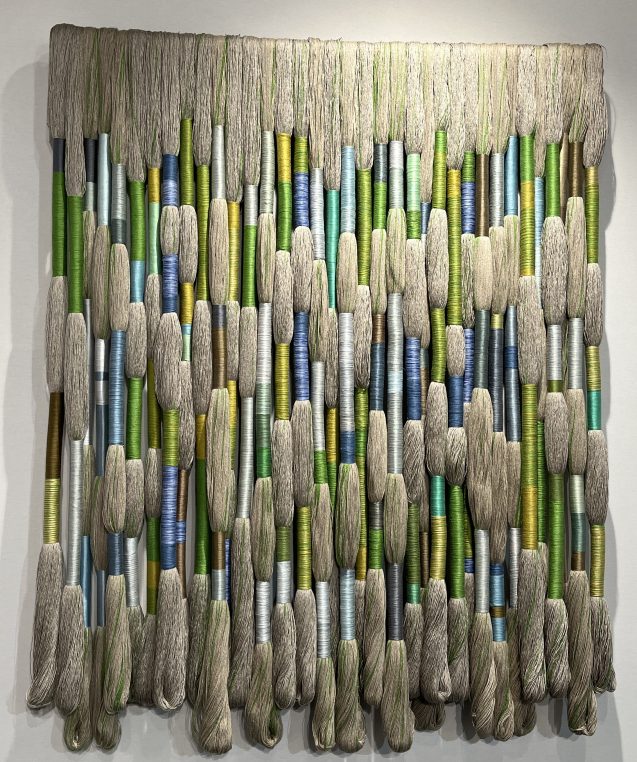 The atmosphère at ArtParis was very electrical and within ten minutes I had already seen four galleries with works I loved. At Mayoral, Vieira da Silva with a large “Blue and Yellow, The Villages”, and a remarkable Joaquin Torres-Garcia, “Dos formas en ocre y rojo” from 1938. At Claude Bernard, Sheila Hicks and Julius Bissier transformed the booth into a waltzing hall with the American weaver’s colorful tapestries and the German painter’s quiet watercolors. In its rue des Beaux Arts gallery, Claude Bernard is showing Maryan in a double bill with Kamel Mennour on rue Saint André des Arts. At Galerie Binome, Thibault Brunet‘s tapestry of the series “Boite Noire” and the Swiss Douglas Mandry‘s lithographs on geotextile, were totally new to me and Lisa Sartorio’s photographs printed on Awagami Murakumo kobo paper are wonderful. I did not know this gallery from rue Charlemagne, managed by Valérie Casino, who was attracting buyers like beas on a honey pot at 11 am on Wednesday. 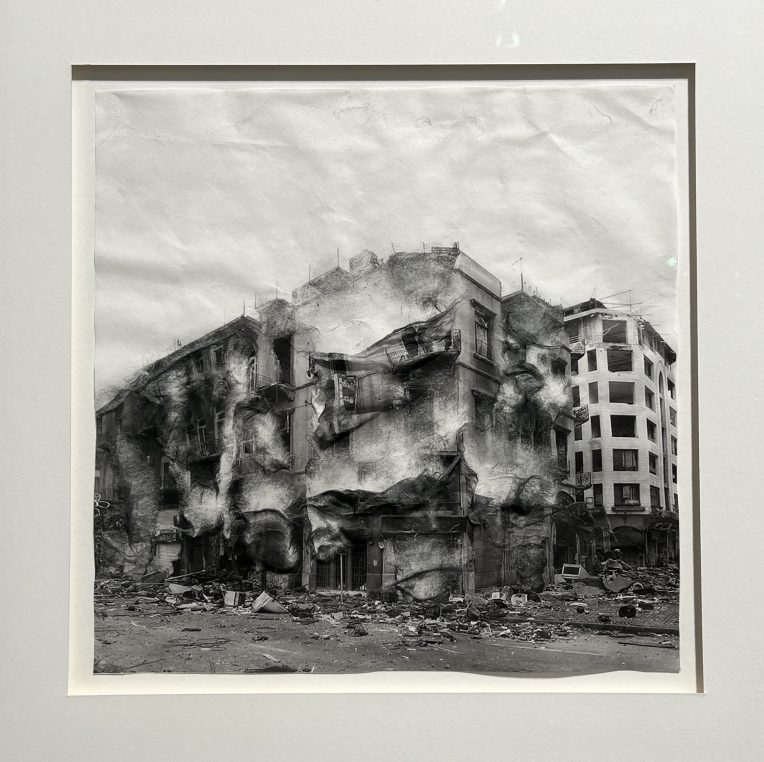 At Opera gallery, I was surprised by another Swiss Andy Denzler‘s “Girl standing with pink top”, the Belgian Fred Eerdekens‘ “It all happened while I was not looking” and Anthony James‘ 50″  Triacontahedron (Solar Black) cube. More classical, Serge Poliakoff’s “Abstract composition” at A&R Fleury, was perfect and at Templon, Jan Van Imschoot‘s “La trahison conjugale”  (Marital betrayal) attracted everyone’s eye. As did the tree of life imagined by Prune Nourry “Atys 2”, a striking bronze trompe l’oeil. At Galeriacontinua, “Bantu towel G”, a painting made of sewn towels by Pascale Marthine Tayou struck my eye with a giant puzzle “Agua de mar, El Coliseo” by Cuban artist, Carlos Garaicoa. In the same gallery, photograher JR (the father of Prune Nourry’s child), who is busy working in Ukraine at the moment, is showing “Nurses at Ellis Island hospital”. Anne de Villepoix, in great shape as usual, continues her African themes with Yveline Tropea, an Italian artist who works in Burkina Faso. 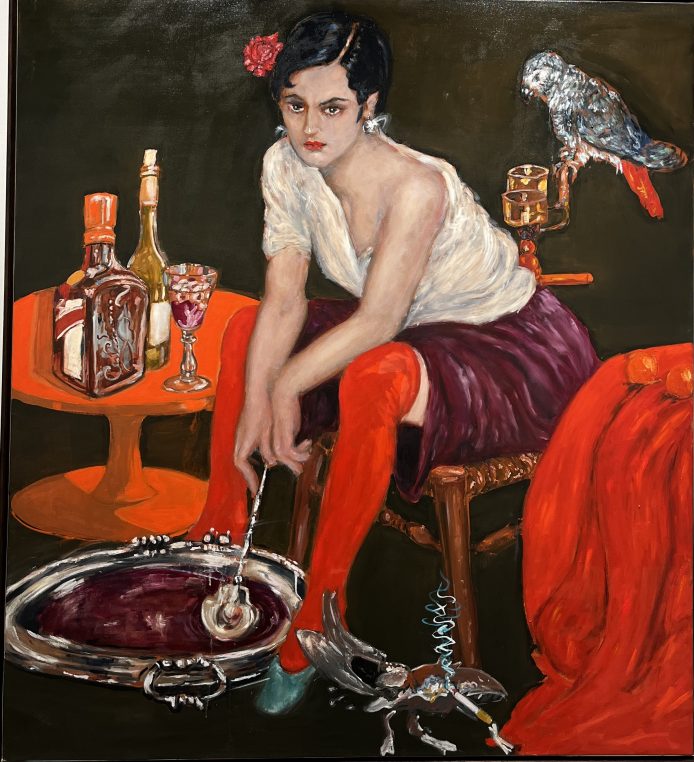 At galerie SitDown, Catherine Noury has a sculpture made of porcelain with an embroidery “Rêver d’Icare”, 2012-2014, and Constanza Gastaldi has photographs printed with heliogravure. Aurore Bagarry is present with one extraordinary large photograph of rocks from Plestin les Grèves in Brittany. My ocup de coeur went for Frédérique Petit’s tiny little embroidered “shadows”, which are extremely poetic. A few large paintings by Olivier Debré at galerie Jacques Bailly ended my run though the Art Paris show at Petit Palais Ephémère. An excellent edition with a special focus on French artists and the natural world selected by Alfred Pacquement and seventeen more on the theme of Art and Environment selected by Alice Audouin. 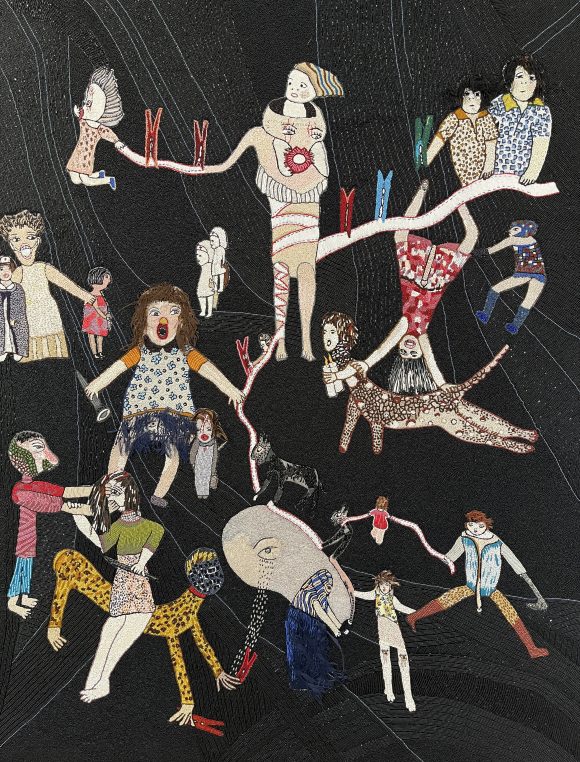 PAD, the Paris design art fair, which traditionally takes place in the Tuileries gardens, showed a series of dealers of 1930-1950 furniture which all tried to look like Charlotte Perriand and Jean Michel Frank. Very dreary. There were three exceptions in the group: Maison Parisienne run by Florence Guillier Bernard which has a stable of young contemporary artisans. Pierre Renart, the cabinet maker, Julien Vermeulen, the feather artist, glass blower Gérald Vatrin, paper sculptor Coralie Laverdet, Jérome Blanc who sculpts “Arentelle” in wooden balls, and Simone Pheulpin the sculptor in cotton, all stood out. They are whimsical and creative. 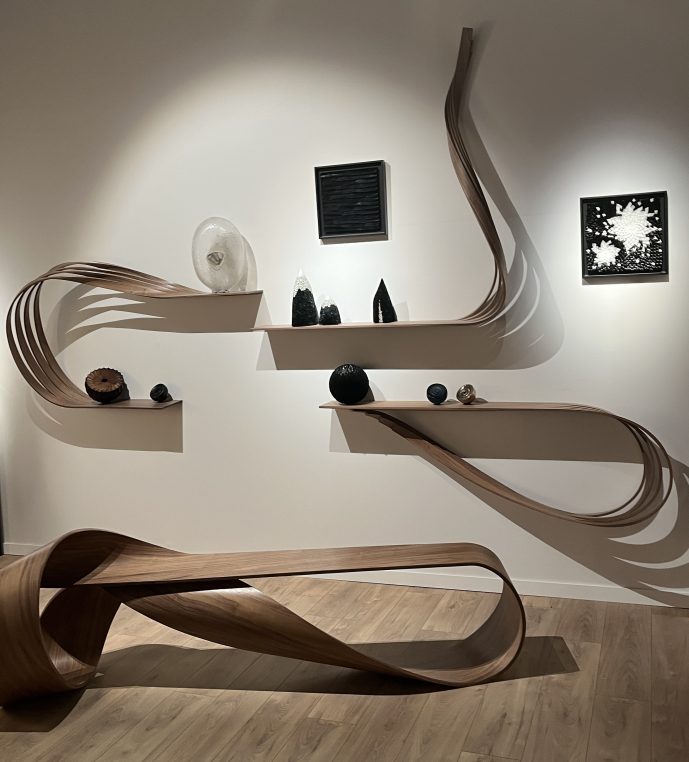 Another booth was extremely pretty, La Galerie duPassage, with Pierre Passebon who was selling a collection of furniture created by the late Pierre Le Tan for a New York collector. Each table and commode was decorated by the artist, the suspensions and intimate sofas also. The sculptures of animals are by Clémentine de Chabaneix. 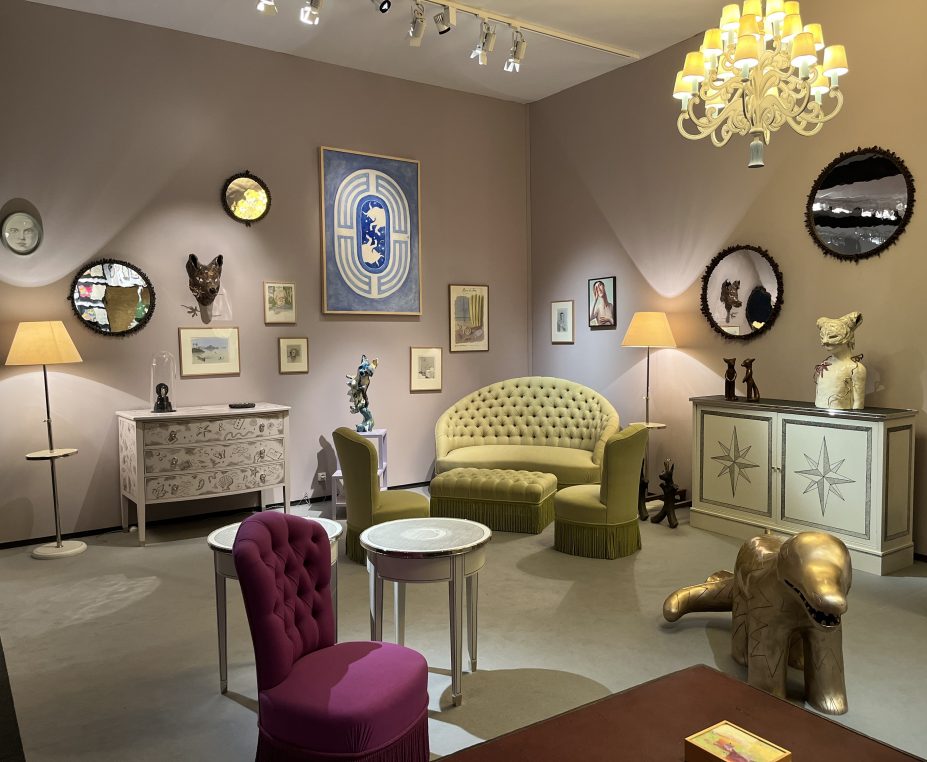 My coup de coeur went for a marshmallow sculpture in porcelain by at Ceramics Now which twice a year exhibits ceramics with Galerie Italienne on rue du Louvre, facing Collection Pinault. The choice of artists selected by Raphaella Riboud-Seydoux and Florian Daguet-Bresson,  included Lee Ufan, Syvie Auvray, Alice Gavalet, Jongjin Park, Alex Zablocki… in a spectacular installation at the center of the fair. A true breath of fresh air…. 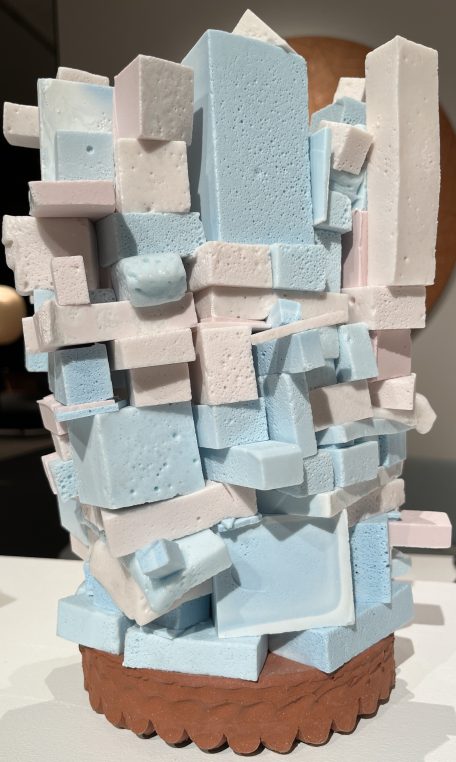 Both fairs were packed with visitors and professionals and the openings were busy social events. It’s wonderful to see that the art world is flocking to Paris again…