This year should be very festive for Château de Chantilly where a new administrator, Anne Miller, has just been named and the 200 th anniversary of Duc d’Aumale’s birth is being celebrated with two exhibitions of drawings and rare Arab manuscripts under one title “Le Duc d’Aumale and Algeria“. A show of Ingres drawings curated by Nicole Garnier, will open next June, a jazz festival will take place in July and a large Sound and Light night will take place in September. In the meantime, a tv series of the Three Musqueteers is being filmed with Romain Duris and of course “La Journée des plantes”, the major garden festival, will take place on 13-15 May. And two large portraits of Duc an Duchesse d’Aumale have been rediscovered in Versailles and are being restored by Les Amis du musée Condé in order to join the collections…

Edward Lear‘s watercolor of Philae has always been one of my favorite paintings at Chantilly where it usually hangs at the end of a long corridor and it was interesting to learn that Henri d’Orléans, duc d’Aumale, whose collections are the pride of the castle, acquired it while in exile in England in 1861. His destiny was very dramatic. The fifth son of Louis Philippe, king of France between 1830 and 1848, became a very young hero in Algeria in 1843, when he seized Emir Abdelkader‘s smalah (nomadic capital). He was only 21. And he already had a particular passion for books and manuscripts. As part of his victory, he was given by his officers, thirty eight rare Arab manuscripts from the town of Tagdemt. His project at the time had been to create there a large library, as Marie Pierre Dion, the curator of the largest rare books private library in France, told us, but he was prevented from it by the 1848 Revolution which deposed his father. And he had to emigrate to England where he lived in Orleans House, near Twickenham. 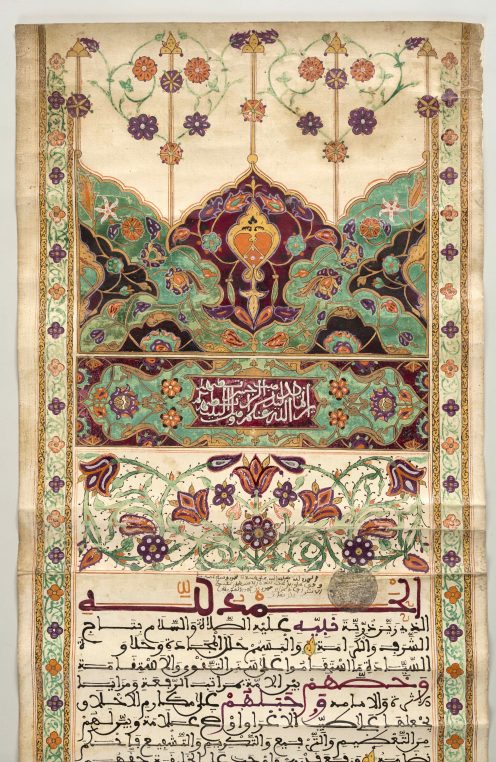 From his eight years in Algeria he brought back a strong interest in orientalist paintings of which there are great examples by Decamps (who spent a year in Greece and Turkey in 1828) and Fromentin in the Grande Galerie. Following Bonaparte’s campaign to Egypt where many scientists and painters brought back images, the interest for the Orient was strong in France at the time. Ingres and Delacroix in Morocco in 1832 will also be inspired and Adrien Dauzats shows very strong watercolors of the mountain. All of these drawings were acquired by the Duc d’Aumale from different collectors or galleries and head curator Nicole Garnier, who curated the show has tracked each one of them.

The drawings are presented in the charming intimate rooms downstairs by the garden and numerous studies of horsemen by Philippoteaux and Leblanc, Horace Vernet’s panoramic drawing of the seizing of the Smalah, Jean Fournier’s colorful “Fantasia”, compete with Delacroix’s albums. A drawing of a “Jew from Smyrna” by the Duc d’Aumale’s brother François Ferdinand, reminds us of the artistic talents of the family who also included the sculptress Marie d’Orléans. Both studied with Ary Scheffer.

Anne Miller, the new administrator nominated by Institut de France which owns Chantilly, starts today. She is a graduate of Ecole Normale Supérieure, where she was a colleague of Adrien Goetz and of ENA, like her father Raphael Hadas Lebel. Her  mother Mireille is a historian, specialized in judaism. She has worked in cultural institutions in Boston where her husband is still posted and where she was involved with the organisation Facing History and Ourselves, in Brookline. The position at Chantilly was vacant since the last candidate Didier Selles, gave up after two weeks, last July. 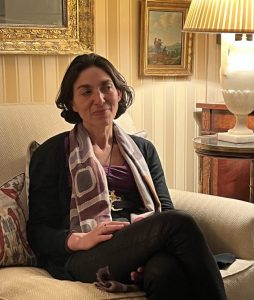 Let’s hope that her International training and her experience in different civil servant’s postions will enable her to deal with the inextricable difficulties of Domaine de Chantilly. As I said, this coming year will be very festive!

“Oriental drawings” and “Manuscripts from Tagdemt” at Musée Condé until May 29. Journées des plantes May 13-15.

One Comment on “At Chantilly, Orientalism and a new administrator, Anne Miller”