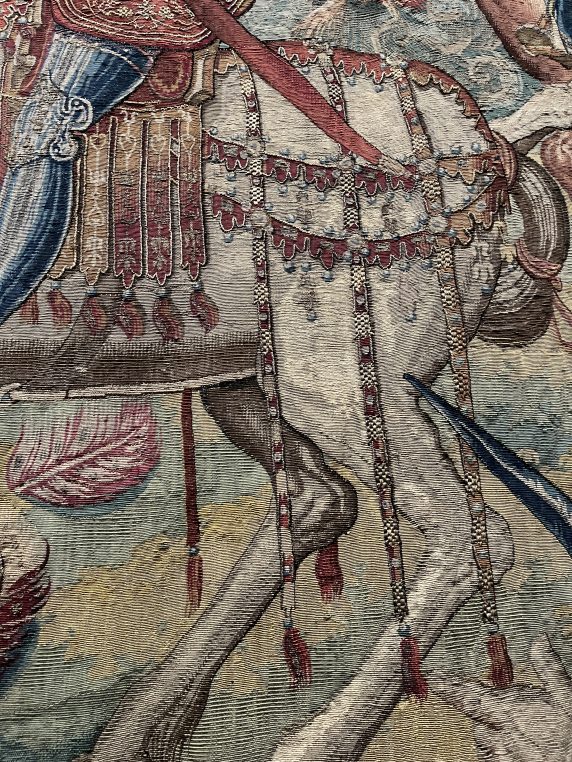 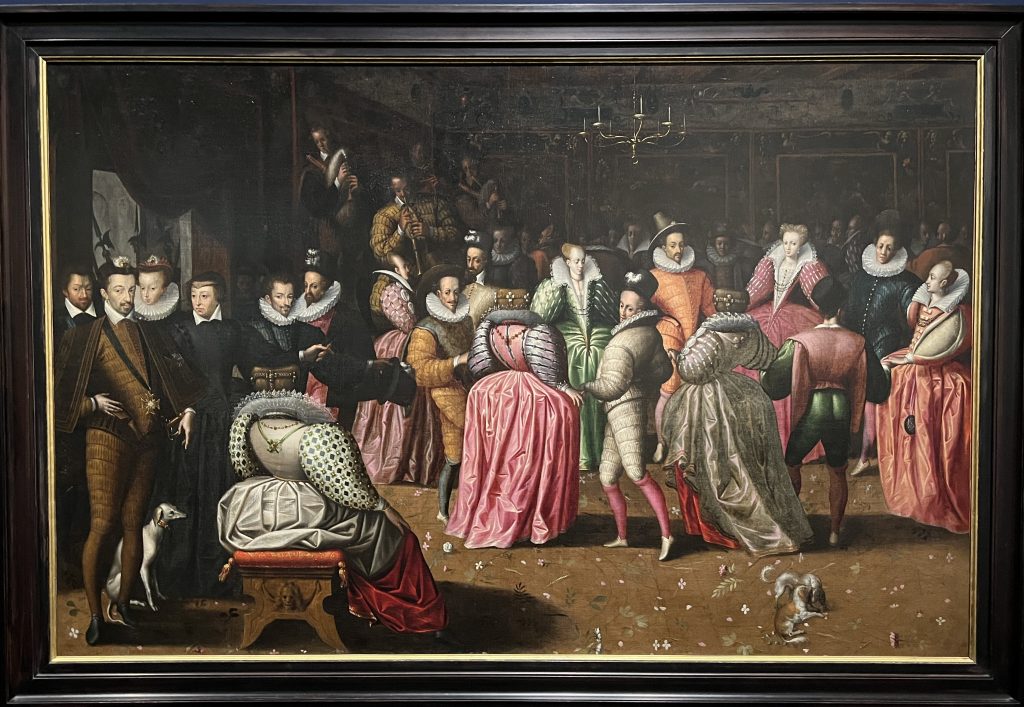 Branle at the court of Henri III, 1581-1583, Paris Musée du Louvre (branle is a fast dance in a circle) with Catherine de Medici, Henri III and Christine of Lorraine on the left

“There never was in France such a display of magnificence and “courtliness” as during the last years of the reign  of Henri II” writes Madame de Lafayette in her historical novel La Princesse de Clèves. This is one of the reasons to go and see the new show “L’Art de la fête à la cour des Valois” (Festivities at the court of the Valois), from François I to Henri III (1515 to 1589) and admire the three unique tapestries ordered by Catherine de Medici which are loaned to château de Fontainebleau by Gallerie de Uffizi in Florence. The quality of the embroidery and the fine portraits and sceneries depicted on the works is not only very modern, but also very vivid and there are no other known example of feasts being illustrated on tapestries. A hundred works, including Renaissance musical instruments and  many Primaticcio drawings, descriptions of royal parades and embassies, could not have found a better place than this treasure of Renaissance style which includes the chapel, the galerie François I and the ballroom. And the good news is that a new restaurant has just opened inside the castle,  with a view of the basin. 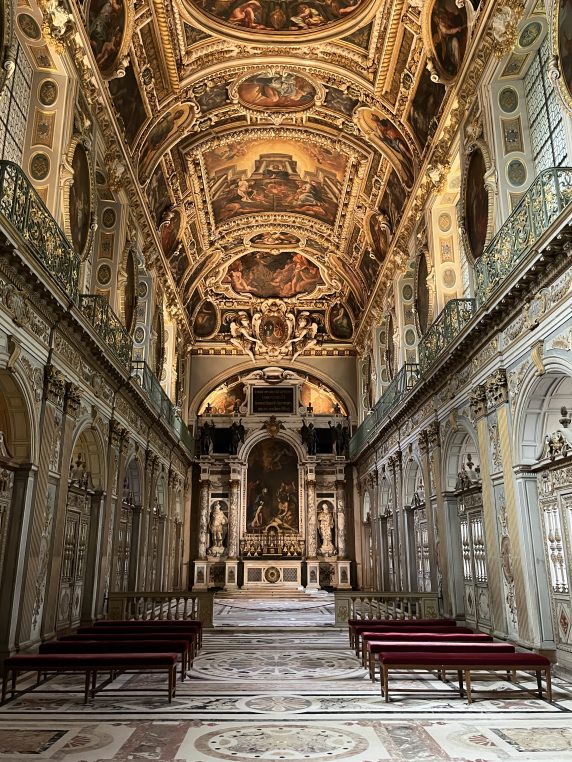 It took four years (two of lockdown) to Oriane Beaufils to prepare this exhibition on the magnificence of the French court and she underlined, in her presentation, the importance of art towards strengthening political power. She represents well the new generation of curators who are extraordinarily well trained in art history and communicate their passion with simple words and clear explanations. 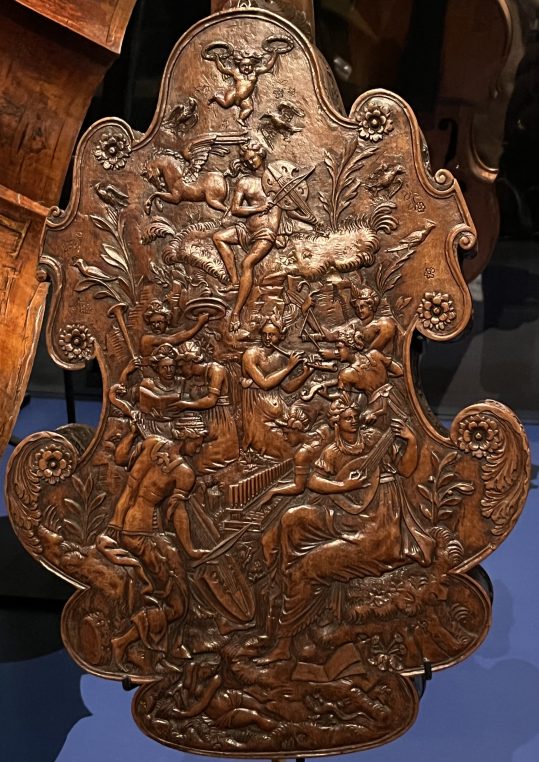 This phenomenon is verified today in countries of the gulf, where museums are built at great expense, to show Abu Dhabi or Doha’s political importance in the Middle East. Fontainebleau castle, where both Louis XV and Duc d’Orléans were married,  has been under work for the last ten years with the restoration of the theatre and all the main apartments thanks to the Al Thani endowment, and the grand Horseshoe Staircase on the façade will be reopened on May 21. 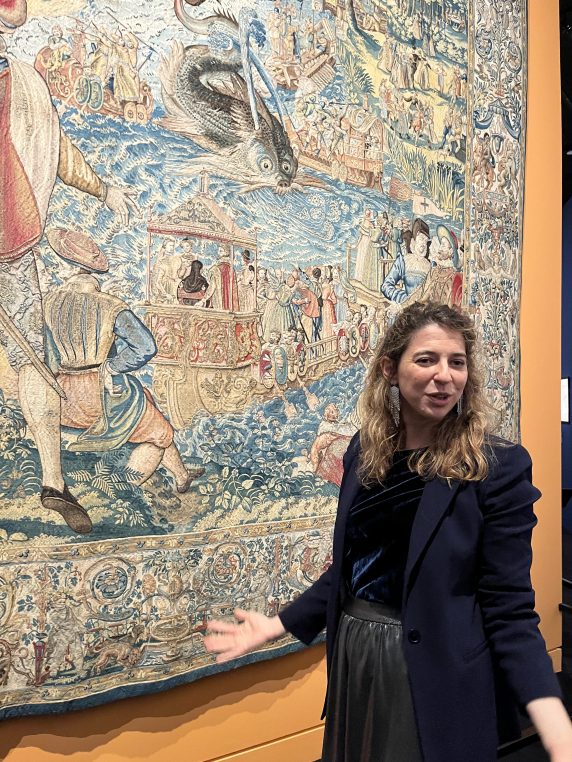 The punchy Oriane Beaufils, is the brilliant curator of the exhibition

But the main news today is the presence of these three (out of 8) tapestries, “Tentures des fêtes des Valois” ordered by Catherine de Medici and lent for the first time by the Uffizi in Florence in honor of the Italian Queen of France and o her husband from the Valois dynasty, Henri II. Gian Battista Gambara, ambassador of Mantua in France in 1541, described the games, mascarades and balls at court. Feasts were prepared by the greatest artists, architects, musicians  and poets who transformed the ephemeral events into diplomatic and political parades of utter importance. While religious wars between protestants and catholics were in full steam in France, art was used to temperate them. 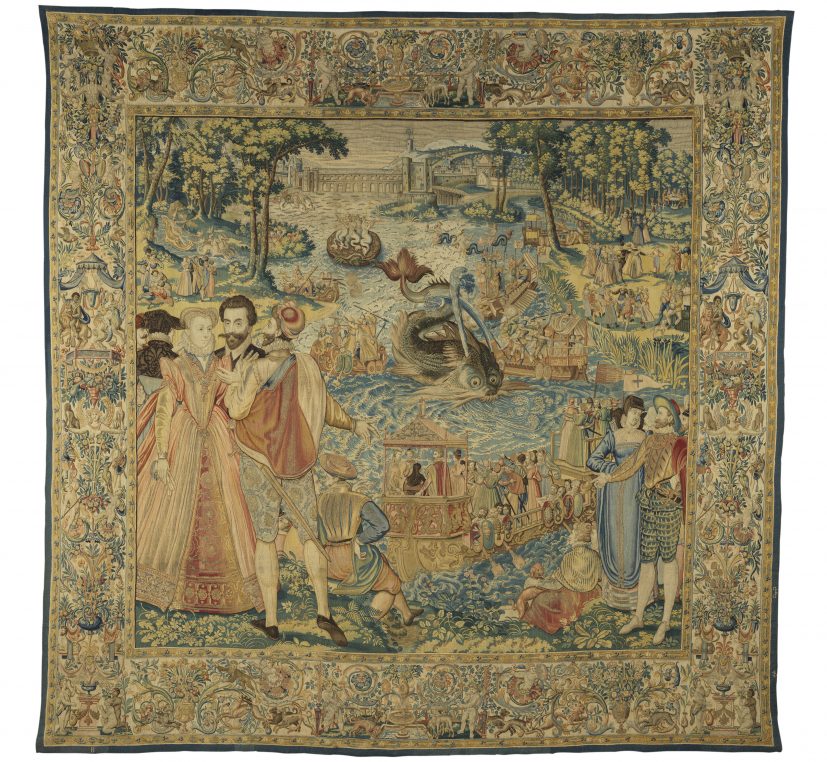 The details of the tapestries  are incredible with the mechanical whale on river Adour in Bayonne in 1565 in honor of the King of Spain. Marguerite de Valois with her husband the future Henri IV and Charles III of Lorraine. Catherine de Medici is seated on the boat in her black widow’s dress, Neptune drives a cart pulled by three sea horses and a turtle with five tritons playing the trumpet is in the back. After her husband died in 1559, the Queen developed a passion for architecture and collected castles: Chenonceau first, then Saint Maur, the Tuileries (later destroyed by fire)… She was the great grand daughter of Lorenzo de Medici and like him protected artists such as Primaticcio, François Clouet and Pierre de Ronsard. Her precious Livre d’heures, which she carried on her waist, is one of the treasures exhibited here. 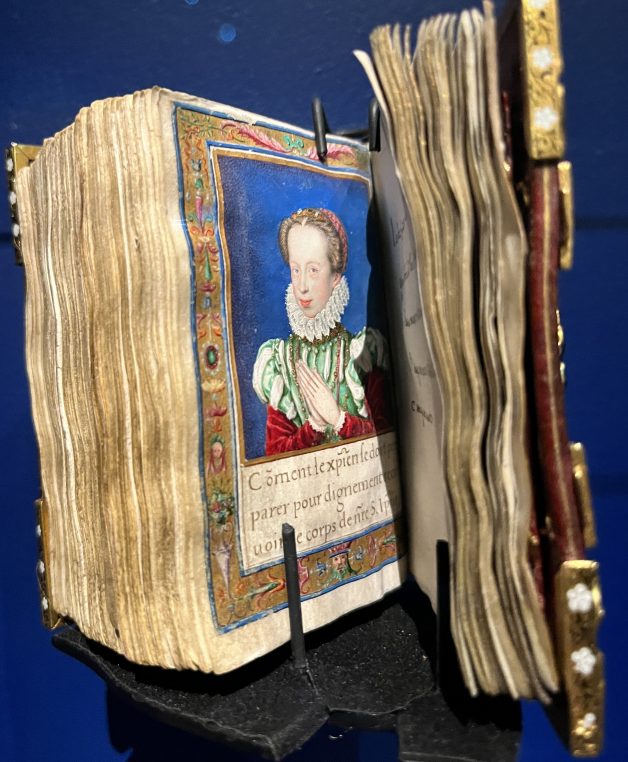 And the musical instruments ornated with coat of arms or hellenistic legends are also rare pieces. An Orpharion from the XVI th century in sculpted maple, shows Apollo and his muses on Mount Helikon. Many drawings by Primaticcio show the lavish masks and costumes designed for these mascarades. One from the Edmond de Rothschild’s collection lent by the Louvre is particularly imaginative. 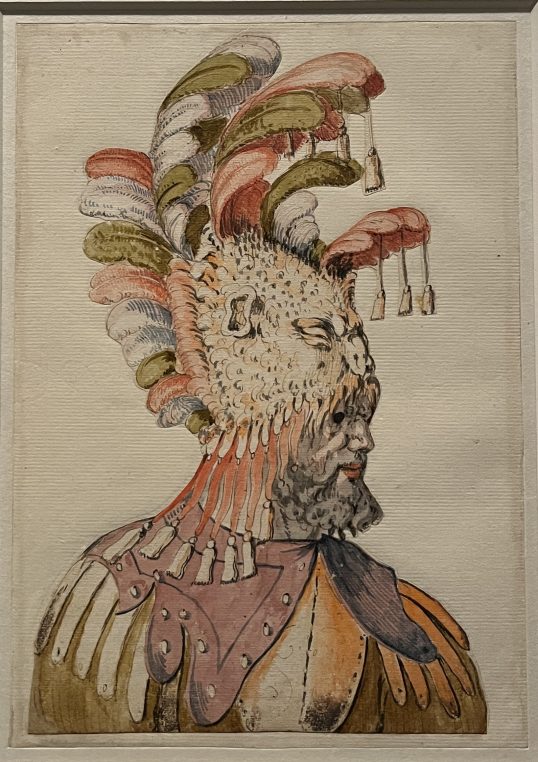 On the way to the Salle de la Belle Cheminée (literally room with the beautiful fireplace) where the exhibition takes place, you see the royal chapel of Trinity with a brand new wall to wall carpet which imitates the marble floor. It is absolutely stunning and was made when the film Versailles was shot in Fontainebleau. You also walk along the François I gallery designed by Rosso Fiorentino (1528-1530), the ballroom and the King’s staircase with its overwhelming sculptures.  You can leave the Renaissance decors and visit the Napoleonic rooms in the Empire museum including Napoléon’s abdication room. 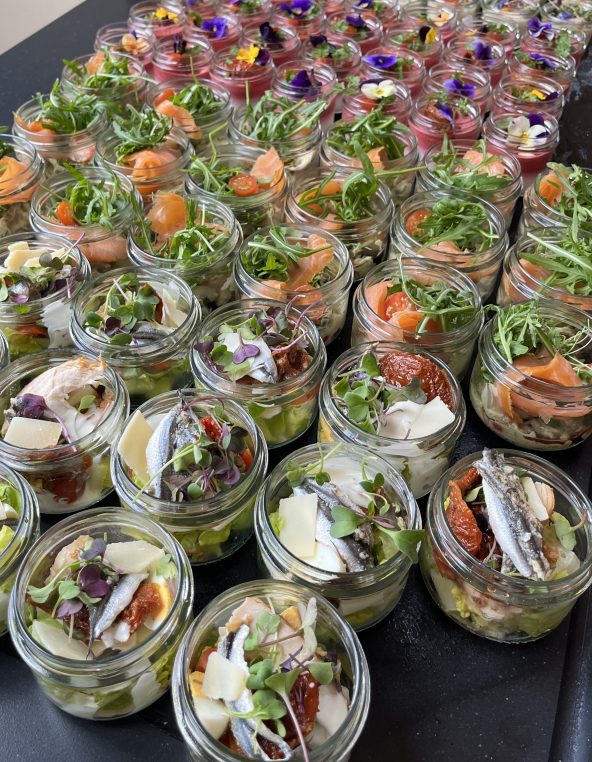 The colorful “verrines” at the restaurant

Since you can spend a whole day at Fontainebleau, you might want visit the new unpretentious restaurant, called “Les petites bouches de l’Empereur” with a menu at 17€ and 26€. It is uniquely located on the water basin and you can hav four desserts if you like. The festival of Art History founded by Pierre Rosenberg, which brings together writers, curators, and publishers at conferences, will take place from 3-5 June. There are also concerts organized in the castle by Thomas Hengelbrock, who is in residence with his Balthasar Neumann ensemble on April 30, May 13-15… So much to do! 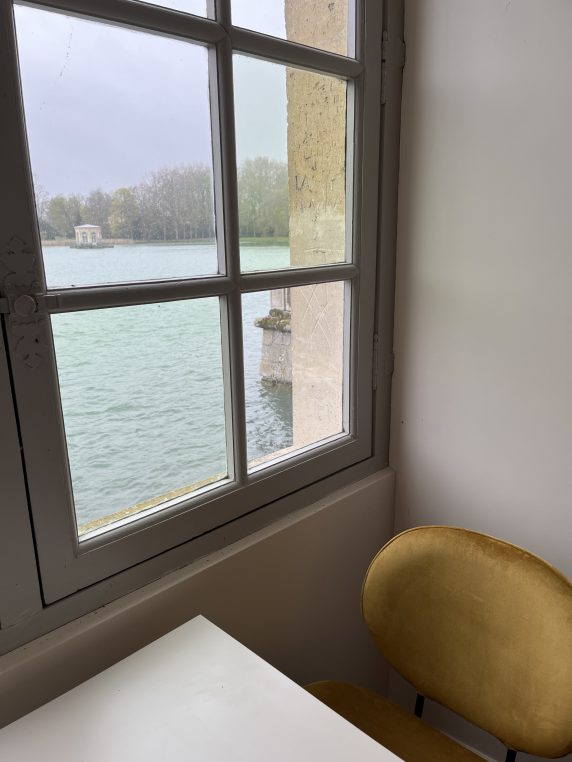 The exhibition “L’art de la fête à la cour des Valois” is on until July 4. Château de Fontainebleau is reachable by train from Paris or by car in one hour 15 mns. The painter Rosa Bonheur, who lived nearby, has bequeathed some of her paintings to the castle and on June 3 to January 23, fifty of her animal portraits will be exhibited on the occasion of the 200 th anniversary of her birth.