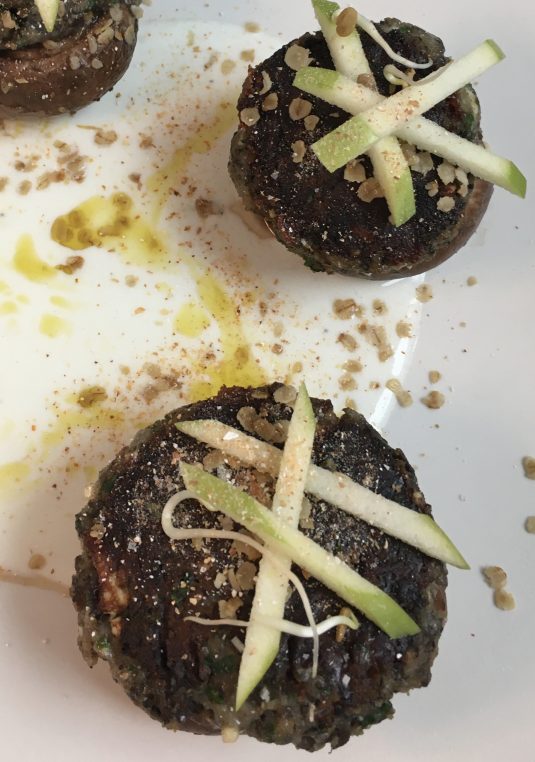 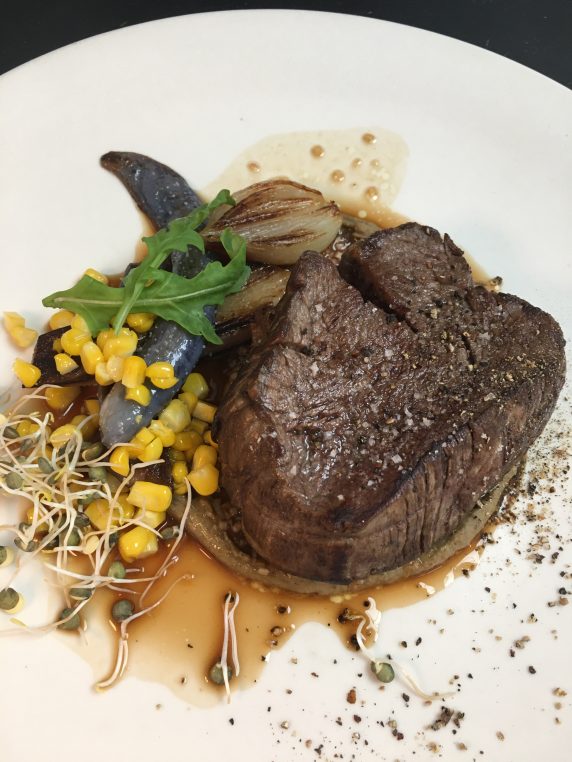 The famous Aubrac filet of beef with minimal vegetable

An American friend told he’d had a great lunch at La Halle aux Grains, Michel and Sébastien Bras’s new restaurant at la Bourse du Commerce. I had heard it took months to get a table, but I tried anyway, one morning last week, and got a reservation for 12.15 pm. A good surprise. When you enter the third floor of François Pinault’s wonderful collection, you feel like walking into a beauty center. It is all grey and white, with a few cookbooks and pots of jam and a very pretty girl behind the counter. We were walked along the corridor which circles around the building with smashing views of Saint Eustache church and then of Centre Pompidou. The decor by the Bouroullec brothers, is surprisingly beautiful and simple and lots of little tables precede a larger one (for 8 -10 guests) in the main dining room. Of course, due to the late booking, we were taken to a back room with the view on the inside of the building, but it was pretty nevertheless. 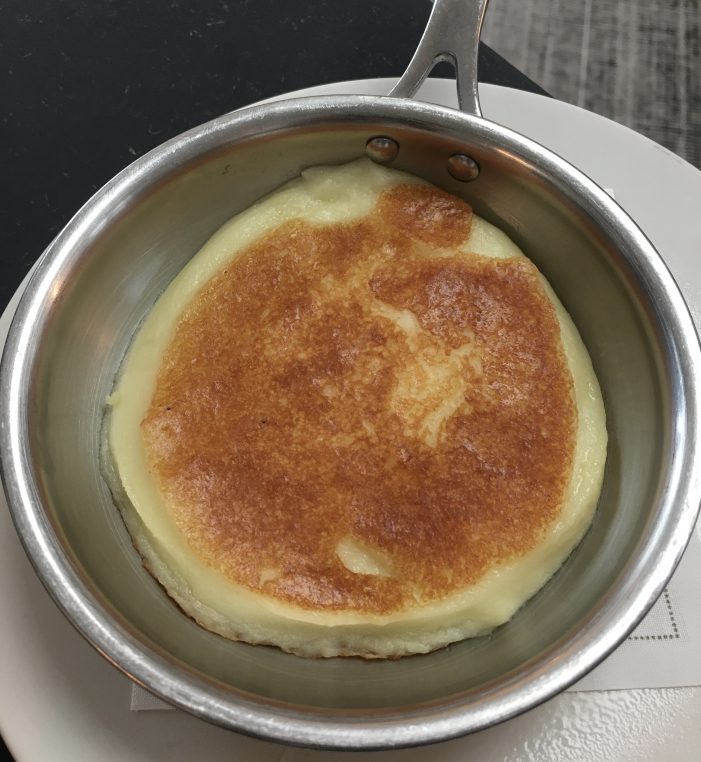 The trendy aligot is slightly grilled

Everyone was incredibly nice and relaxed, wearing three sorts of uniforms. The maîtres d’ are in a blue jacket and blue jeans. The waitresses in navy blue tops and jeans. The hostesses wear an elegant beige jersey dress. It is all very becoming. We were of course disappointed because our table looked at the collection and the round fresco of the Bourse du Commerce but our small dining room with two lonely diners was pretty. There were a couple of Americans and Germans. Lamps designed by Inga Sempé are trendy and the fabric on the walls is becoming. 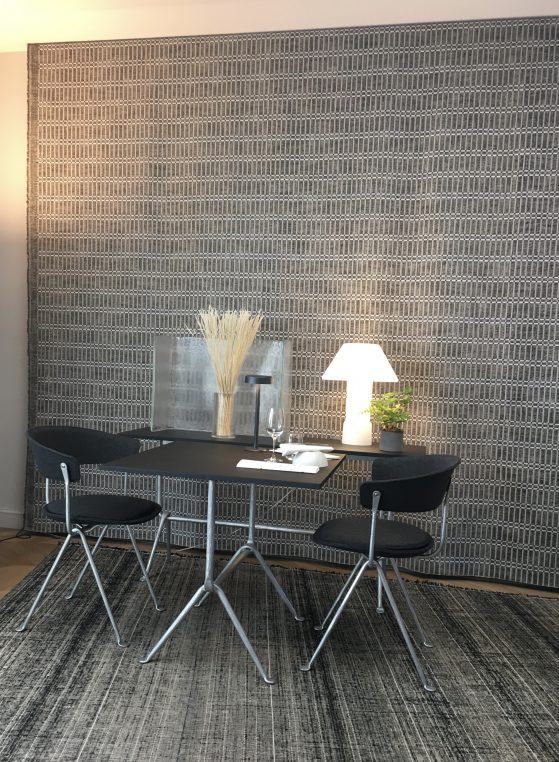 Michel Bras should think of creating a “table d’hôte”, a group table for loners because it’s just too sad to have lunch alone. There is a set menu at 54€ which we did not like: tomatoes with brebis cheese, duck, wild blueberry mini tarts and lemon sherbet. So we went for the menu. Stuffed mushrooms which were good and “voile de terrine de cochon”, which is very aveyronnais and finely prepared. Then we had a fabulous piece of Aubrac beef with tiny vegetable and Allaiton lamb from Aveyron with onions. Dessert was a tasteless poached peach with raspberry sherbet and a delicious and surprising mille-feuilles de grains de courge  caramélisés. Why do restaurant always add sherbet or ice cream to the dessert? 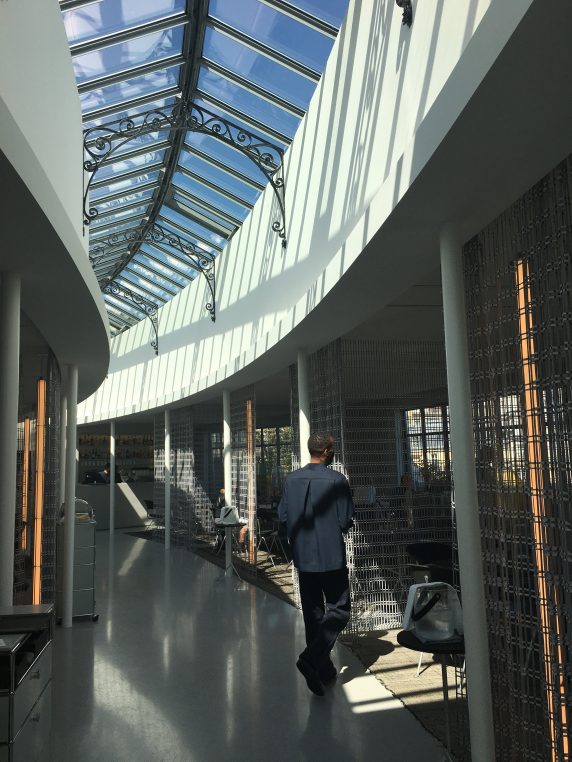 The disappointment came from getting almost no vegetable except for tiny grains. Grains are the focus of the restaurant because of the previous destination of the building a Halle aux grains… The aligot was grilled and lost its flavor on the way. The starters were alright but not tasty. The desserts were disappointing. Neither my friend nor I came out feeling that we had discovered a new gastronomical paradise. Maybe there were to many grains and tiny onions or corn ? In my imagination, Aveyron is the land of plenty as far as food is concerned. Here it is as if Paris had contaminated the food and made it minimal except for the size of the meat pieces which are huge. 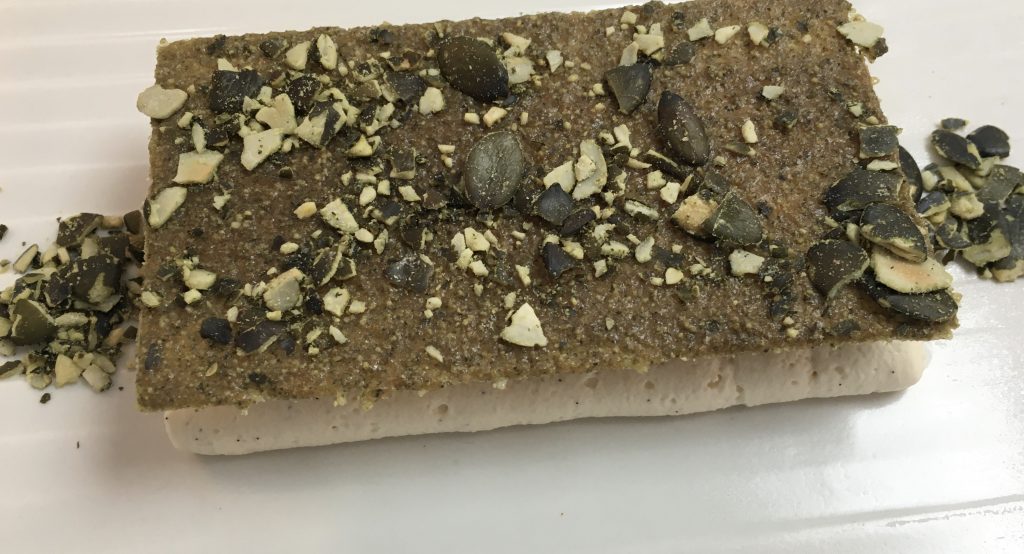 The meat is fantastic and this is the reason one goes to Aubrac and Aveyron. But why inflict on us to keep the dirty (Laguiole) knife from the first course for the excellent meat? I asked the waitress, Ludivine, and she said that it was the Bras father and son ‘s policy. “In Aubrac you keep your  knife…” As a result the table was stained with gravy all through dessert.  The black bread was good and the linen napkins very refined though. The sun glittering through the large windows and roof was enough to make everyone happy. But it was not the banquet I expected!

Stuffed mushrooms with an apple decor

La Halle aux Grains. There are three prices of set menus at 54€, 78€ and 98€ (for seven courses) and à la carte. Tea is served from 3 pm to 6 pm without reservation and this might be the good deal. The views and decors are spectacular, and the service delightful. A la carte is around 100€ with wine.

5 Comments on “At la Halle aux Grains, the decor tops the food”