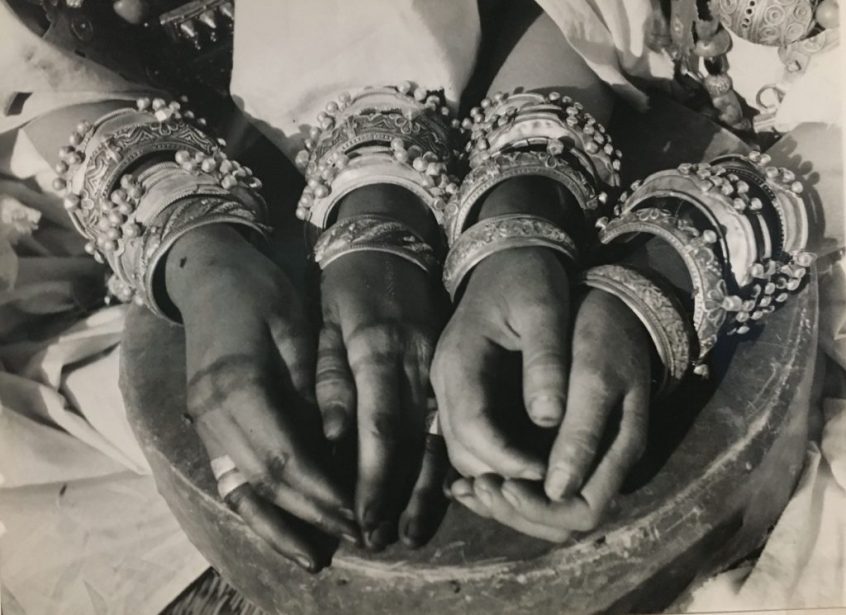 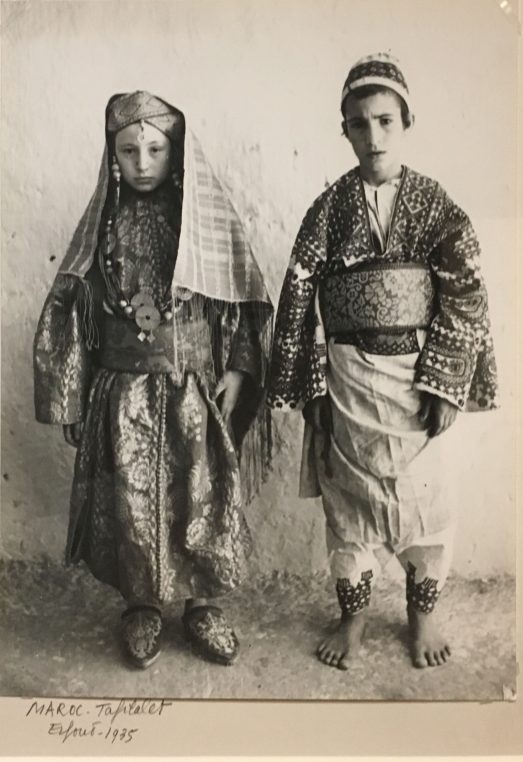 It all started with Hannah Assouline‘s passion for history and when she found a picture of her father’s as a young groom, shot by Jean Besancenot in 1935 in Southern Morocco, this woman who is herself a photographer, decided to research more about the Jewish community in Morocco.  Photographer Jean Besancenot (1902-1992) spent his life documenting costumes and jewelry in Morocco with photos and with gouaches. He published a book of drawings in 1942 and worked at Musée de l’Homme. 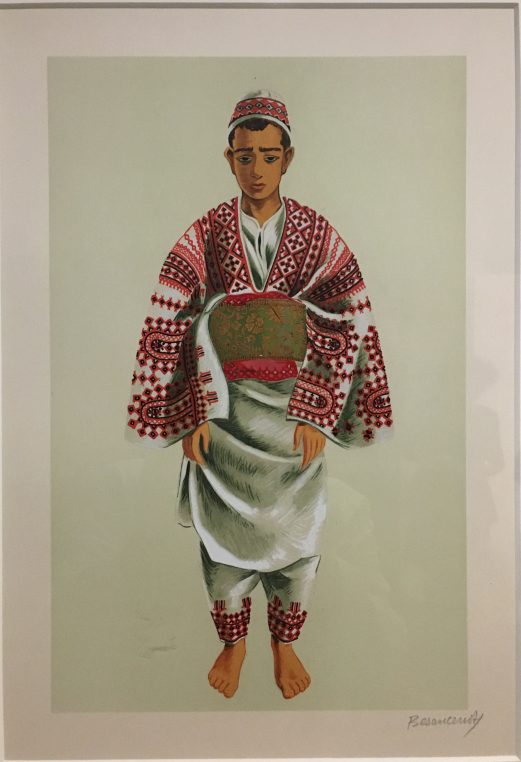 The young groom wears a long undershirt called “tchamir” and a short white blouse embroidered with black and red geometrical patterns called “déréa”. A high belt, “hzam” and pants tightened at the ankle. His hat or “terbouch” is also embroidered. It was customary to marry children very young at puberty. The photo of the couple is recreated by Besancenot, and because the groom was asked at the last minute, he does not even wear shoes which would make him ashamed of the picture later on and explains his sad look. 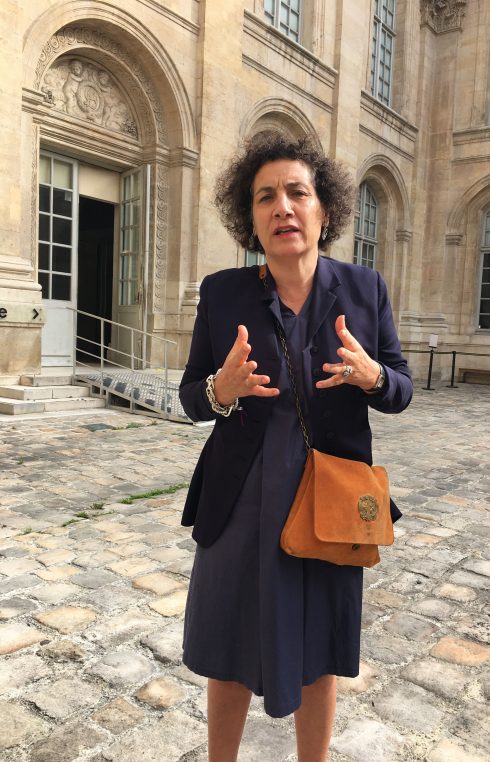 Jean Besancenot was a true ethnographer who worked with a Rolleiflex camera and printed all his pictures himself. He gave his negatives to IMA, Institut du Monde arabe, before he died, and a diorama was made from them for the show. You can hear his voice commenting the pictures, in the interview by sociologist Dominique Carré for France Culture radio in 1984. He died penniless, leaving this incredibly rich research. 40 pictures come from the MahJ collection, more have been lent by Musée Majorelle and private collectors, including Sarah Assidon-Pinson, a specialist of Berber jewelry who exhibited her treasures at Fondation Yves Saint Laurent in Paris a few years ago. 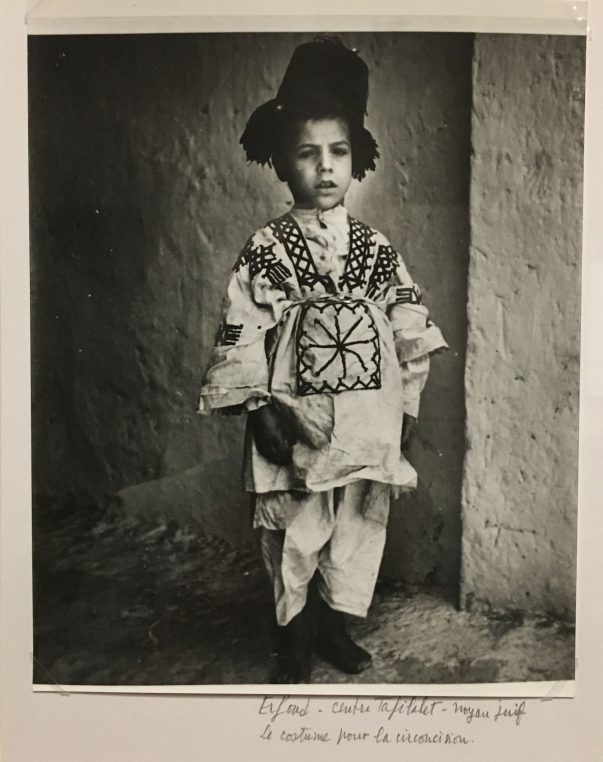 Settled in North Africa in the first century ad, the Jews were chased by the Romans and were well received by the Berbers. They had to wear black and dress in a particular way, but had legal status. In 1492, a new emigration from Spain this time, increased the community. In the 17 th century and again in the 20 th century, the transaharian trade was lessened and the community slowly disappeared. There are still a few important families in Morocco today and the Assouline family is also prominent in France. Messaoud Assouline, the father of the curator of the show, died in Paris, where he ended as the rabbi of the synagogue on rue du Bourg Tibourg in the Marais. 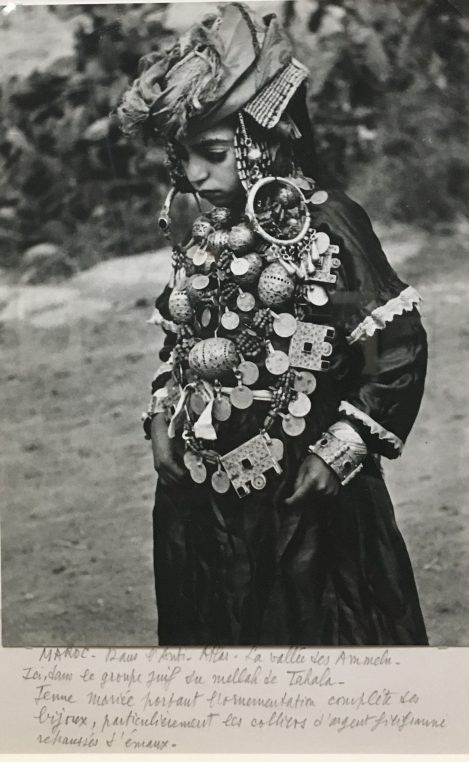 There are many details of jewelry and costumes in the show and one realizes through books found in the  museum store that the Jewsih community’s presence was well documented even in the 19 th century. Eugène Delacroix himself, painted a series of works published in the book called “Les Heures juives” (Jewish hours in Morocco). It’s particularly interesting to see how these small communities mixed the local muslim costumes and ornaments with their own traditions.

The exhibition goes on until May 2, 2021. It is a unique occasion to discover this hidden life of a Jewish community in the Moroccan desert.

3 Comments on “At MahJ, berber jewelry is worn by Moroccan Jews”