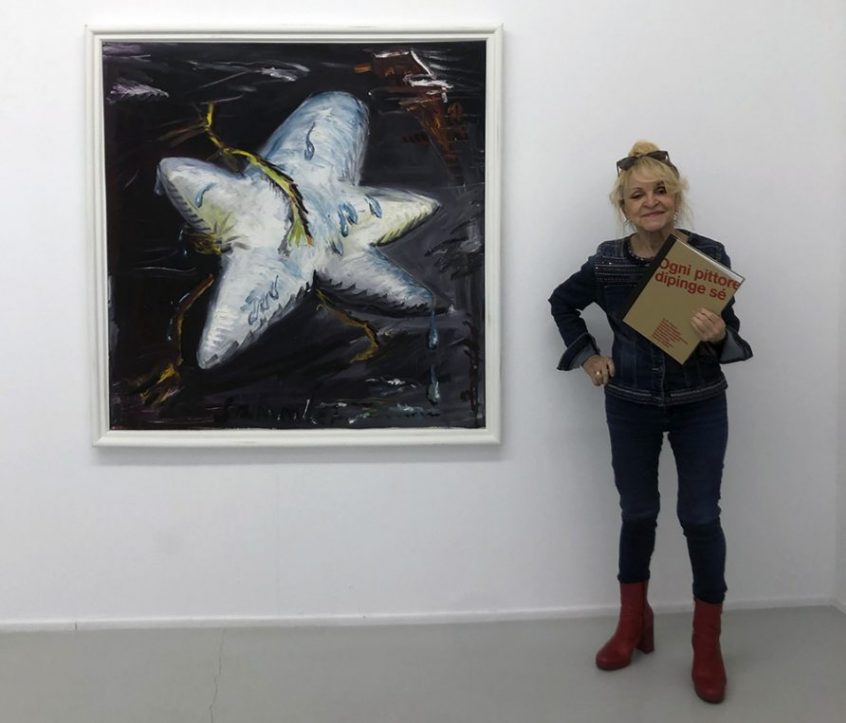 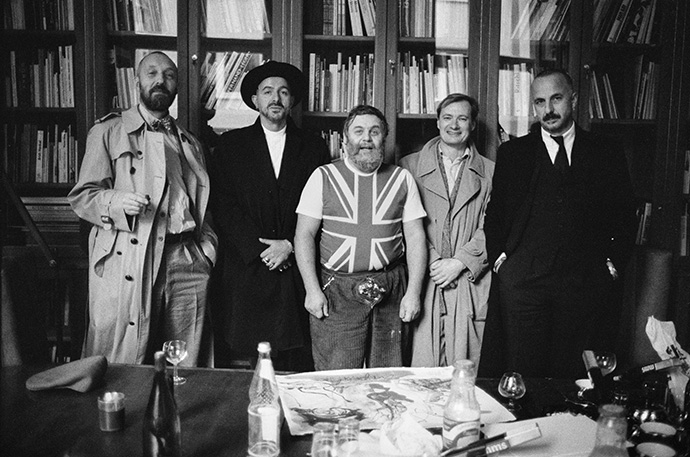 In 1987, five German painters met at Michael Werner’s gallery in Köln to work together. Belgian photographer Benjamin Katz was there to shoot them individually and as a group. The extravagant Suzanne Tarasiève is exhibiting the wunderkinds of German New Figuration movement in her gallery of 7 rue Pastourelle in the Marais, and the show is absolutely stunning. During the semi confinement, the gallery can be visited by appointment. 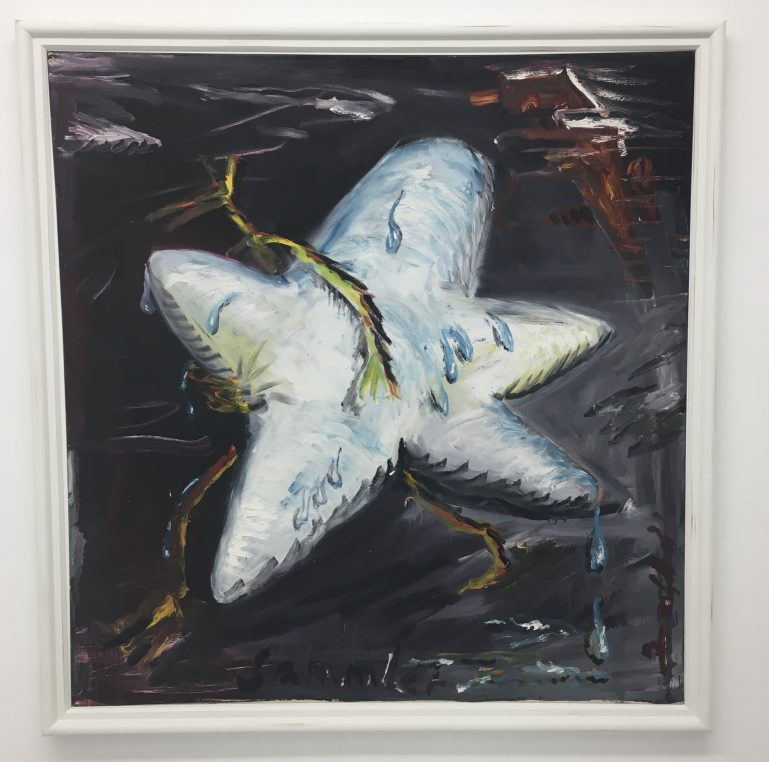 “Georg Baselitz (1938), Markus Lüpertz (1941), A.R. Penck (1939-2017), Jörg Immendorf (1945-2007) seek a connection with the rich history of European art, while at the same time being unable to ignore the shadow cast on it by the legacy of the Second World War. Whereas abstractionism allowed artists to distance themselves from that shadow, these artists deliberately opted for figuration as a way to express the cultural complexity of a divided Germany. Not only the legacy of the war plays an important role in this, but also the strong US and Soviet presences in Europe. While the artists in this exhibition do not feel obliged to adopt political positions, they do wish to examine the situation in which they find themselves. They make use of familiar – and often emotionally charged – symbols and produce a sense of alienation by placing them in disconcerting contexts.” This is how this group of German painters was described in the large exhibition which they had in The Hague’s Kunstmusuem, in 2016. 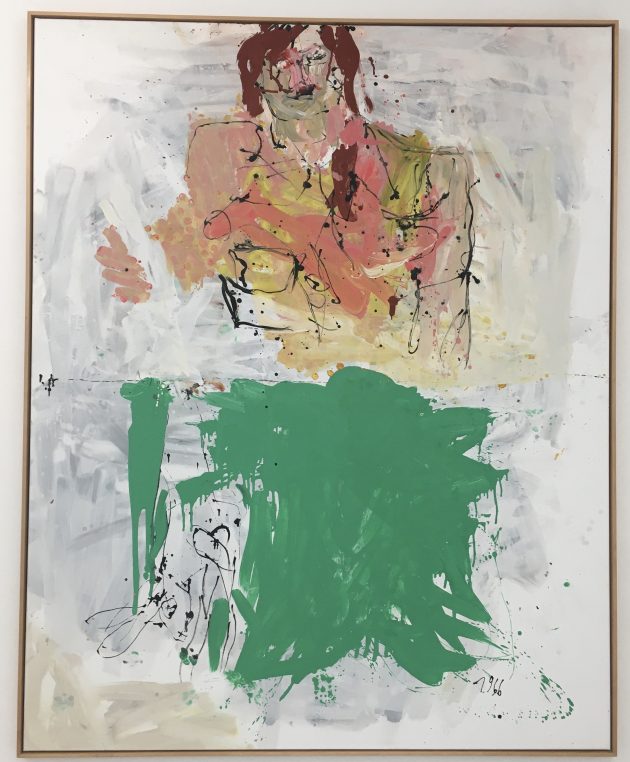 A.R Penck remained in Dresden, East Germany until 1980 when he moved to Köln and joined the group of New Figuration artists. He was a drum player in parallel with his painting. His close friend Jörg Immendorff trained with Joseph Beuys in Düsseldorf and also made numerous stage designs. He died very young of ALS, amyotrophic lateral schlerosis. Markus Lüpertz will turn 80 this April. He has been director of the Düsseldorf  school of art in 1988 and creates theater decors in parallel with his art. He is one of the most successful German artists of the post war period and lives between Berlin and Düsseldorf. 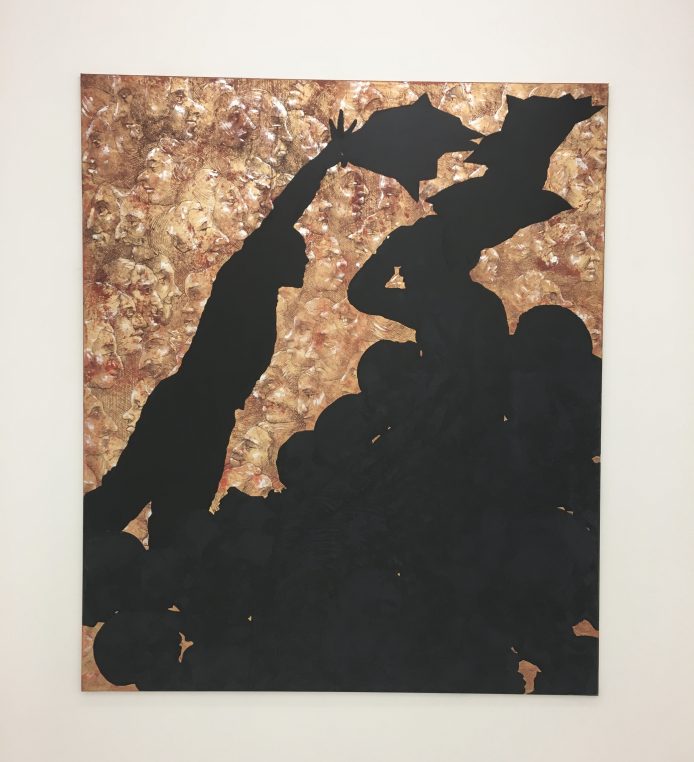 Per Kirkeby, the only non German (he was Danish), taught in Karlsruhe and in Frankfurt and died in 2018. Georg Baselitz was born in 1938 in what would become East Germany, studies in East Berlin and moves to West Berlin in 1958. He starts doing upside down paintings  in 1969. His large painting of a hunter “Jäger” is the first one you see when entering the gallery. Antonius Höckelmann (1937-2000) was a sculptor and a painter. Sigmar Polke (1941-2010) also fled East Germany in 1953 and settled in Düsseldorf were he studied with Joseph Beuys. He first was a photographer and moved on to painting. He died in Köln. 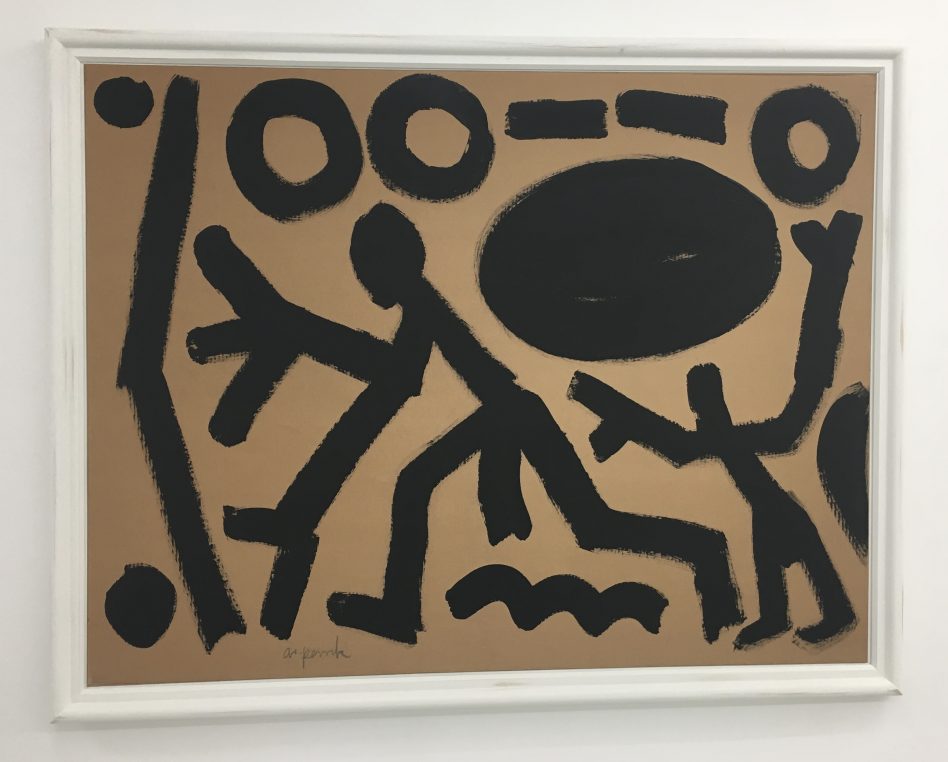 Then follow Per Kirkeby’s “Ohne Titel”  and a couple of  extraordinary paintings by Immendorff, Markus Lüpertz, Höckelmann and Sigmar Polke.  In each room, a black and white portrait of the artist by Benjamin Katz is shown facing their canvases and sculptures. The show is totally exceptional and gives a good spectrum of this German New Figuration generation of artists which I had never visualized together.

6 Comments on “At Suzanne Tarasiève, New figuration German painters have a ball”