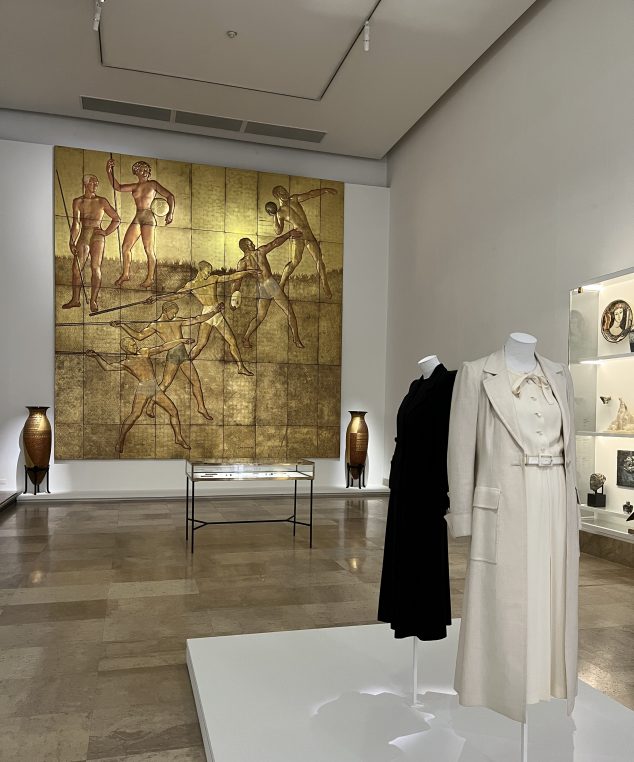 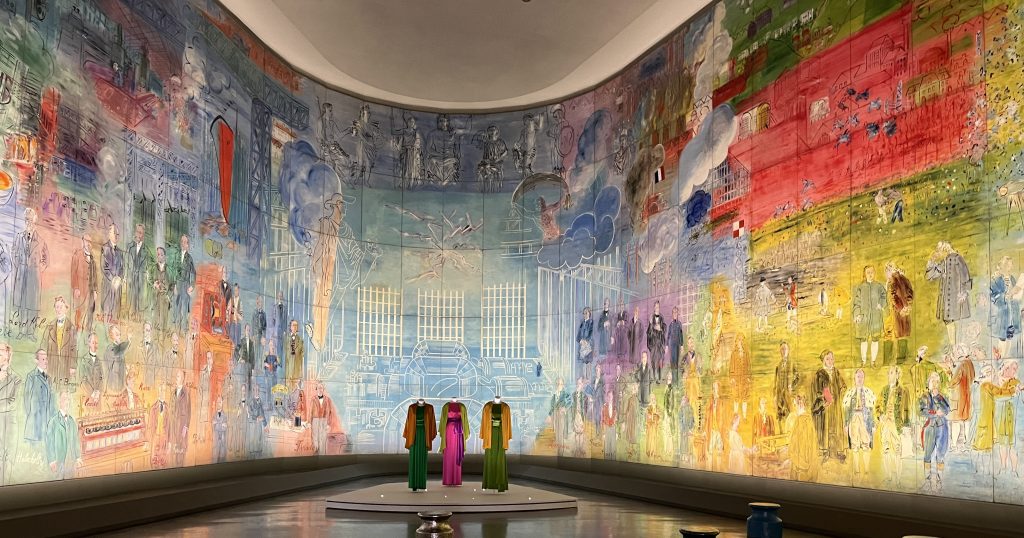 On Friday, I walked 12 kms and took four metros and one bus to achieve the marathon for the five openings of the “Yves Saint Laurent aux Musées” exhibitions. I started at Musée d’Art Moderne de la Ville de Paris, then took the bus to Musée d’Orsay, walked over to the Louvre, then down to Musée Picasso and walked to the Pompidou center. A nice promenade through the best museums of Paris who are keen to get the attention created around Yves Saint Laurent’s sixtieth anniversary. A great coup realized by Pierre Bergé’s heir, Madison Cox, with cocurator Mouna Mekouar and their fabulous set designer Jasmin Oezcebi. I bet that the Saint Laurent company owned by Kering is very happy too. 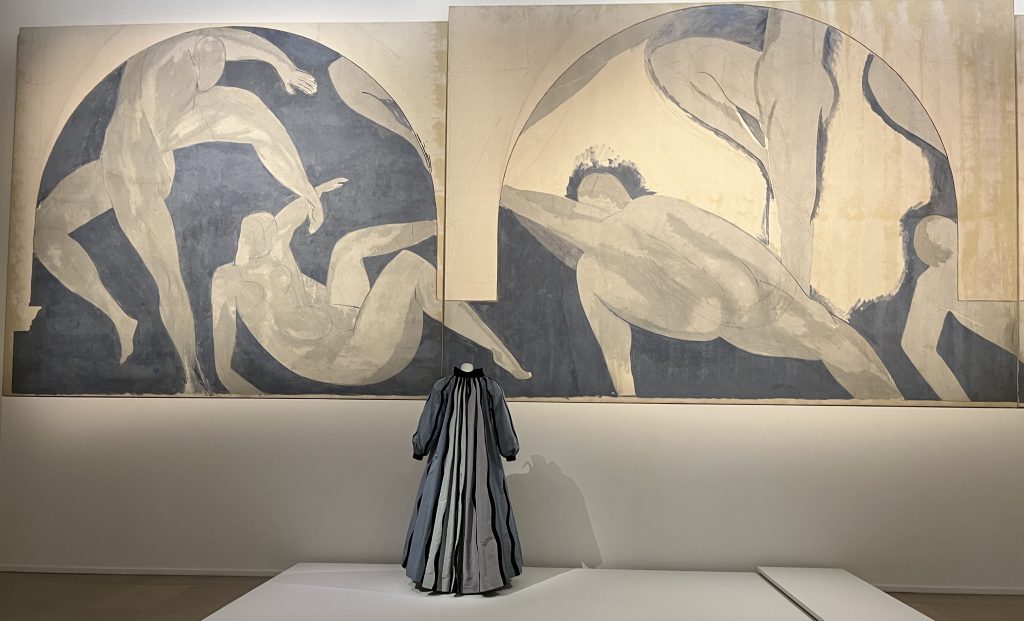 Inspired by Matisse’s “Dance”, this Fall-Winter 1984 domino cape is in different shades of blue faille and black velvet with an organza bustier and pearl satin skirt. At MAM, musée Yves Saint Laurent

Starting with MAM Paris was a stunning experience with the grand decors of the “Fée Electricité” and the two “Danse” in the Matisse rooms. Whether, in the mostly grey room or in the more colorful one, where black and white evening dresses from 1981 and 1982 are shown, the emotion to see these huge Matisse paintings is always intact. A black coat from the first ready to wear collection in 1966 is also included. And one understands well how YSL could be inspired by all these exceptional paintings. Facing “La Danse” is a wall of Pol Buren’s multicolor stripes which creates a perfect background for the dresses. All the fashion was lent by the Musée Yves Saint Laurent Paris. 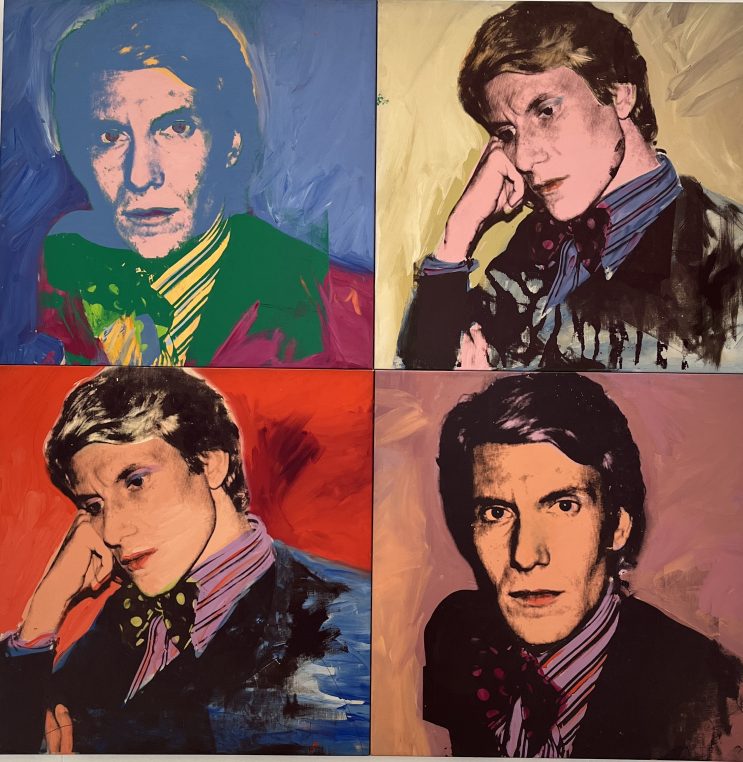 Yves Saint Laurent (1936-2008) met Andy Warhol in 1968 and they became close friends especially while the artist was filming “L’Amour” in Paris in 1970. “Although both were very shy by nature, they could relate to what they had in common, starting with the roles they each played in the momentous changes then occurring in art and fashion”. The presentation at MAM Paris is the most artistic of the five, with extraordinary decors and a true sense of aesthetics. The Chirico room is particularly successful as well as the optical effects of Alain Jacquet‘s “Déjeuner sur l’herbe”, where green and grey jackets are presented. But I also loved the Bonnard room with more classical evening dresses and the majestic Art Deco rooms with Anne Duperey’s dresses in Alain Resnais’ films. 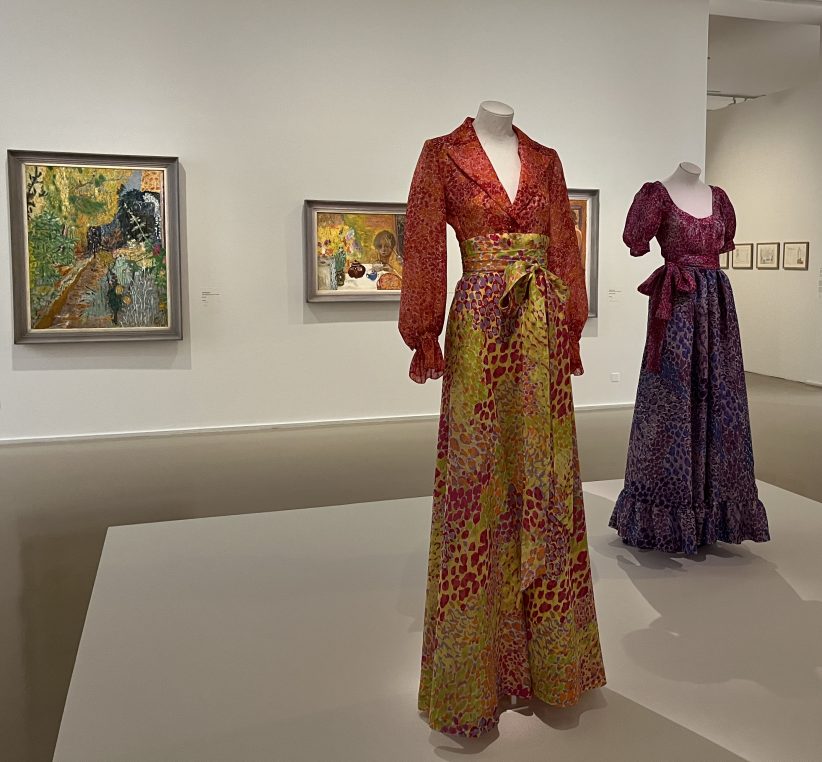 At Musée d’Orsay, you have to climb to the fifth floor, to the Impressionism rooms, where a group of 7 black and white dresses and tuxedoes welcomes you in front of the old large station clock. It is quite spectacular.  You then walk past a number of Van Gogh’s and other beauties to reach the small rooms of Cabinet des dessins, where the first drawings and sketches made by Saint Laurent in 1957 for Alexis de Rédé’s ball are very surprising. Headdresses and decors for Hotel Lambert’s Bal des Têtes include a sketch of Marie Hélène de Ganay and one of a buffet with ribbons and flowers. The designer was only 21 and still signed Y. Mathieu Saint Laurent! He already had the right connections. 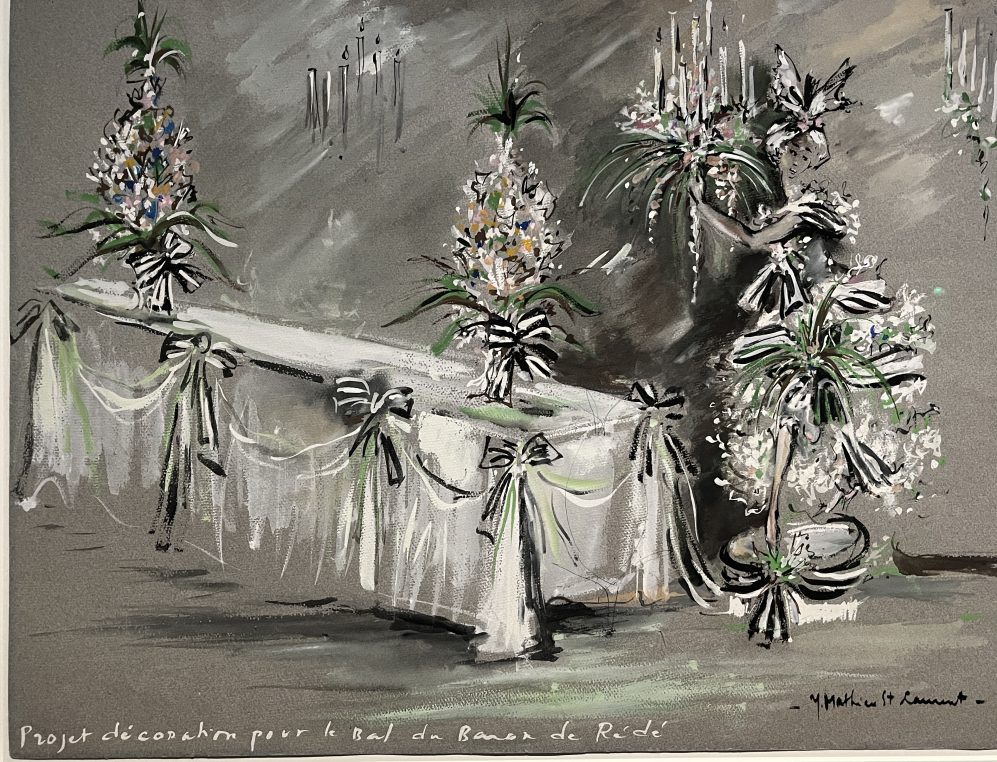 The presentation is a little disappointing even if Cecil Beaton’s photographs of Hélène Rochas, Marie-Hélène de Rothschild (who will remain a faithful friend) and Jacqueline de Ribes, wearing Saint Laurent couture, are a good remembrance of those glamorous Vogue years, but make sure you visit the “Signac as a collector” exhibition on the ground floor which is very moving…

Off to the Louvre, where one has to walk quite a long way to reach the very glittering Galerie d’Apollon, where the new President, Laurence des Cars, very soberly dressed in black, was being interviewed in front of the gilt embroidered Saint Laurent jackets. 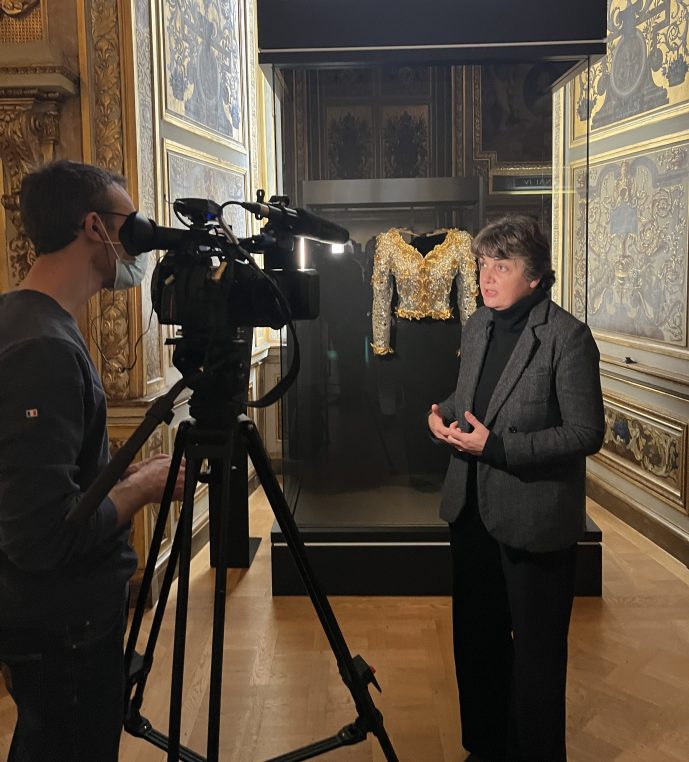 It is a nice little hint to have chosen four gilt embroidered jackets for the very precious Galerie d’Apollon which presents the Louvre’s jewels and treasures. And on the way you see enough of the museum’s statues and paintings to be pleased. It’s also a good occasion to go back and see the Galerie des Rubens where the 21, 4 meter high, huge paintings describing Marie de Medici’s life, hang all around. In an exceptional recital, pianist Alain Planès recently played wonderful Liszt, Chabrier and Chopin pieces for a very select public composed of the most generous “Friends of the Louvre”. Sadly Laurence des Cars was in Abu Dhabi that evening, but she is back now and was being interviewed by an International television in the Saint Laurent show. 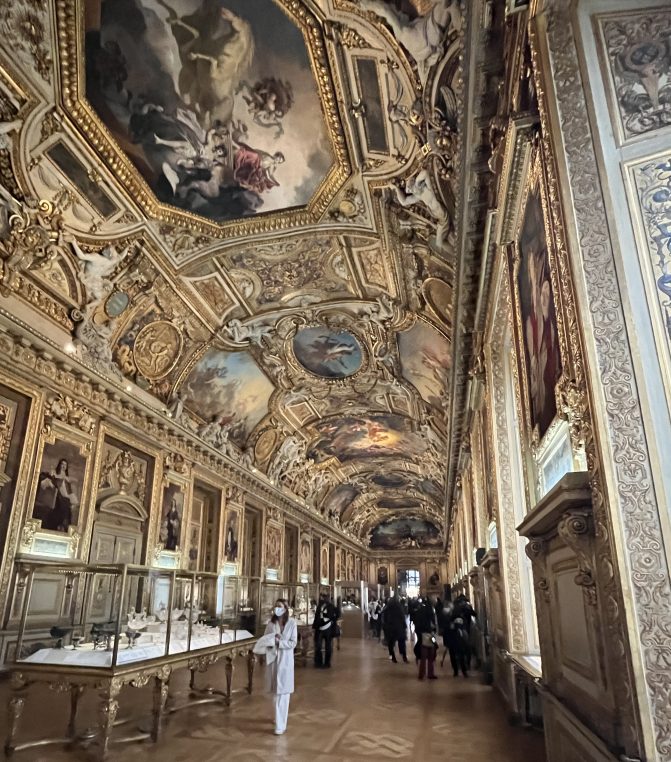 Galerie d’Apollon is spectacular at the Louvre

I then went to Musée Picasso, one of the artists who inspired Saint Laurent the most. There, one room on top of the stairs is devoted to a jacket inspired by the portrait of Nusch, Paul Eluard’s wife. And Picasso’s 1915 violin led the designer to create a black and white jacket for his 1988 Spring-Summer collection, which was very influenced by Braque and Picasso. 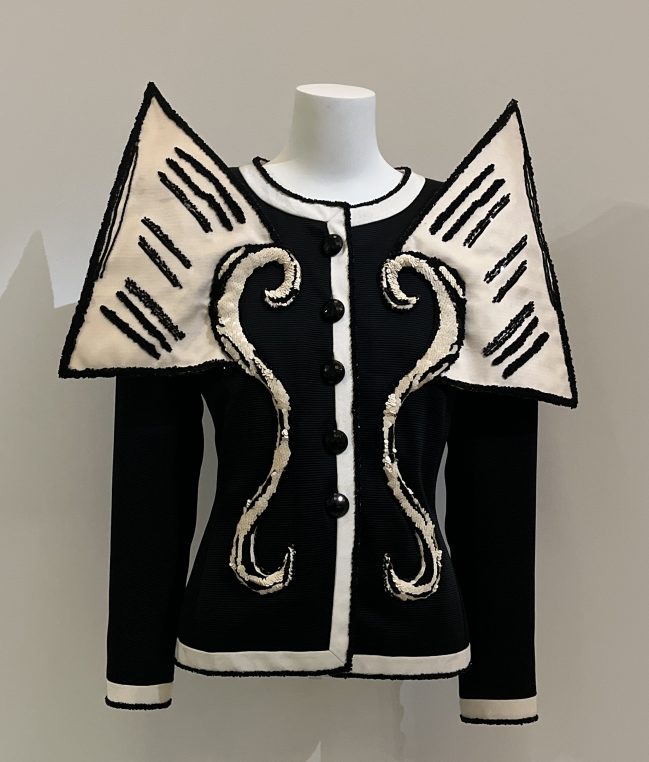 Later at Centre Pompidou, I will discover that Matisse inspired, with his Rumanian blouse, a Fall-Winter wool etamine blouse and Braque, a wool cape embroidered with sequins. An evening dress from 1981, is shown next to Fernand Léger’s “La Fleur Polychrome”, 1952. Another very colorful tribute to Picasso from 1979 is exhibited on the 5 th floor of the Museum of Modern Art, and of course the Mondrian dress, Fall-Winter 1965 is shown next to “Composition en rouge, bleu et blanc II”,  from 1937. 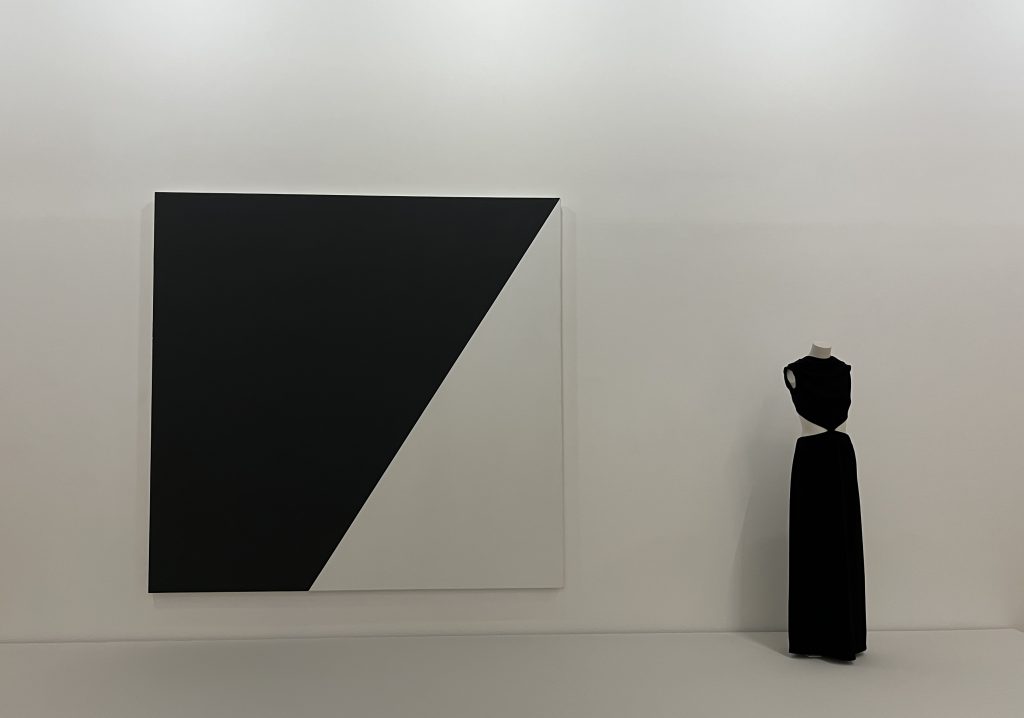 Towards the end of the show at Centre Pompidou, a more daring association is made between Elsworth Kelly and Saint Laurent who created his black white dress twenty three years before the artist painted his canvas. One could assume they were influenced by the same artists. I also liked his “Hommage to Tom Wesselmann” one of my favorite adolescence painters, which hangs next to British artist Gary Hume, “The Moon” whom I had never seen before. 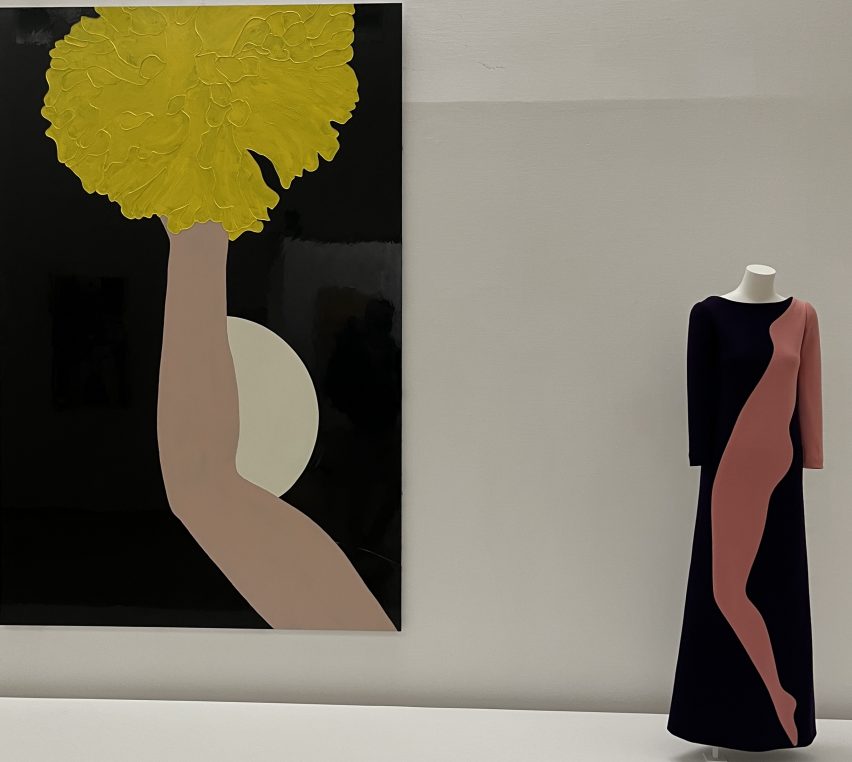 So there is a lot to rediscover in those five exhibitions and you can also visit the Musée Yves Saint Laurent at 5 avenue Marceau where many documents and archives are being uncovered. The scenography for all shows was overseen by Jasmin Oezcebi and the exhibitions are curated by Mouna Mekouar with Madison Cox, and curators from each museum. Until May 15 at MAM Paris, Musée d’Orsay, Le Louvre, Musée Picasso, Musée National d’Art Moderne and Musée Yves Saint Laurent.

7 Comments on “At the Yves Saint Laurent marathon, MAM is the winner”