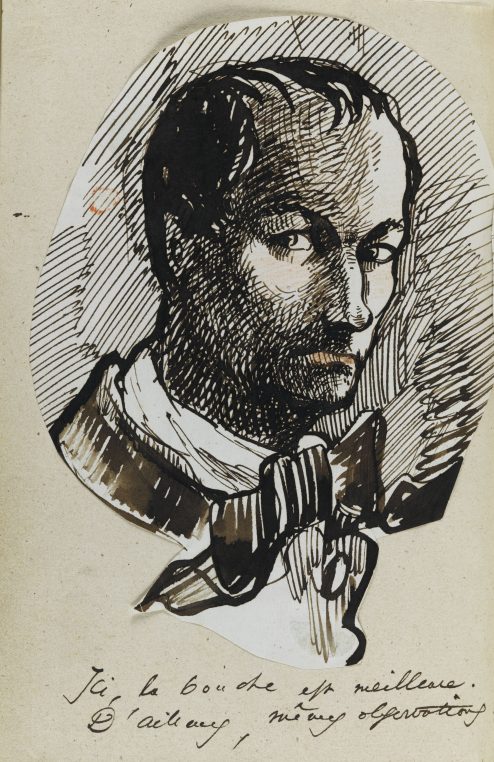 It took me a little time to get to the exhibition “Baudelaire, la modernité mélancolique” (Melancholic modernity) celebrating the bicentenary of the poet’s birth, which opened in November at Bibliothèque nationale de France, because I feared it would be too intellectual and stiff. Well the way the symbolist poet’s writings, sources and portraits (200 pieces) are laid out is so pretty, that you wander through the show with great pleasure. It is particularly interesting to see how he was inspired (or illustrated) by prints produced by his friends and contemporaries such as Eugène Delacroix, Pieter Claesz Soutman, Odilon Redon, Gustave Moreau… A great map of Paris shows the 38 different addresses where he lived during his very short life (1821-1867), sometimes moving apartments every three months. His self portraits are vivid and many photographs by Etienne Carjat (1828-1906) show his “spleen” at the end of the exhibition (until January 27). 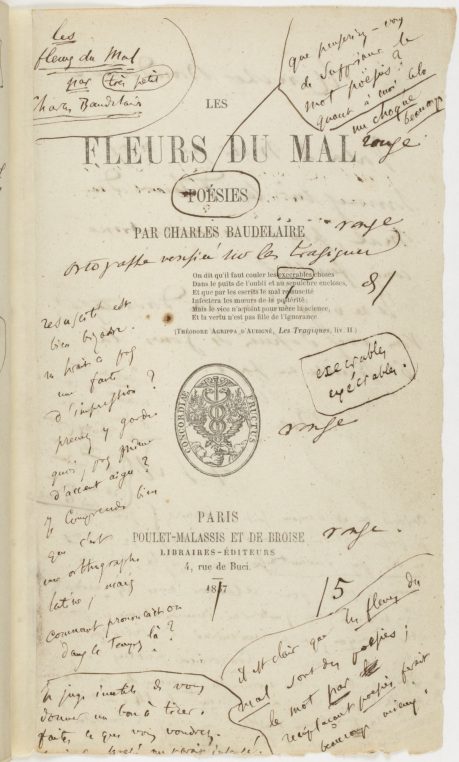 The show starts with Hamlet. Charles Baudelaire lived in 1843, at Hotel Pimodan, surrounded by the complete collection of Delacroix’s 13 Hamlet prints and felt dislocated like the Shakespearian hero. It is followed by the notion of exile, from his mother first, who did not understand him, and his permanent moving around for lack of money. Melancholy, which he associates to beauty, is omnipresent in the exhibition and it si extremely moving to see his handwriting in manuscripts (like Mon coeur mis à nu) and all over the corrected proofs. He was also a good artist and his self portraits are powerful. 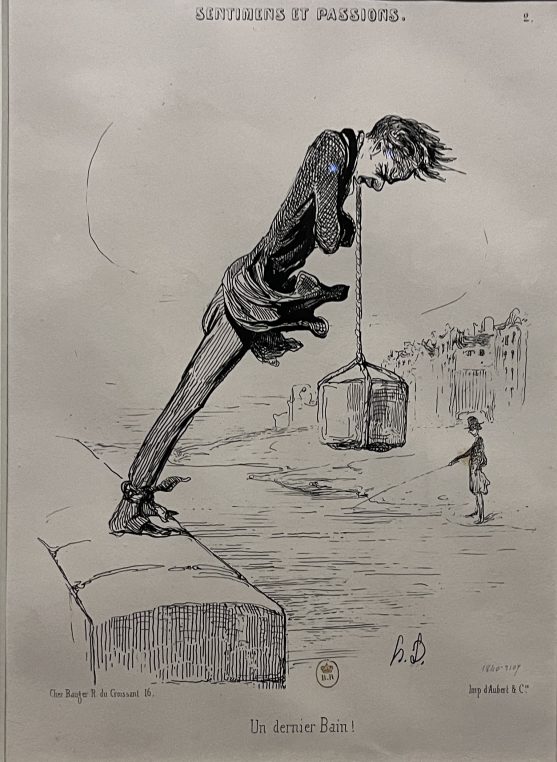 Charles Baudelaire, who died after having two strokes and had become hemiplegic, had a tortured life. His father died when he was 6 and his mother remarried General Aupick whom he disliked. His stepfather forced him to travel in 1841 and he went as far as La Reunion and Madagascar in the Indian Ocean, which led to the writing of exotic poems. He had inherited a little money from his father but it was managed (sous tutelle) by a notary, which he found humiliating. He attempted suicide in 1945 at 34, then briefly joined the 1848 Revolutionaries. All this time he was having a tumultuous relationship from 1842 to 1856, with a mixed race woman, Jeanne Duval, who had been Nadar’s lover. Noone knows for sure where she was born, whether in Mauritius or in Haiti. 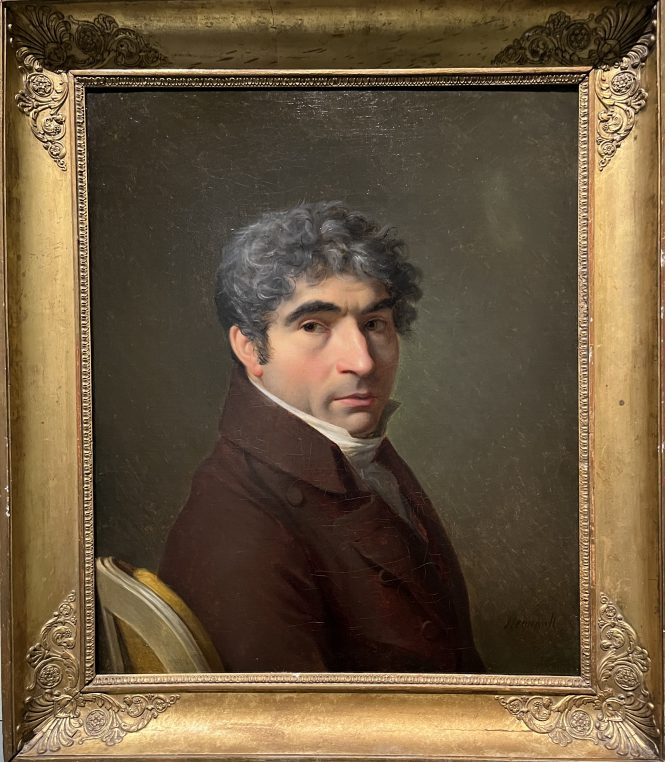 The poet is censured after the publication of “Les Fleurs du Mal” and has to suppress six pieces from the book. Again he feels humiliated when called at court. A section is devoted to this.

He was very influenced by images and there is a magnificent section dedicated to death with prints by Félicien Rops and Alfred Rethel with a large poster of a skeleton riding a unicorn. We also follow the demolition of Paris by Haussmann thanks to a print by Maxime Lalanne which is reminiscent of Piranese. 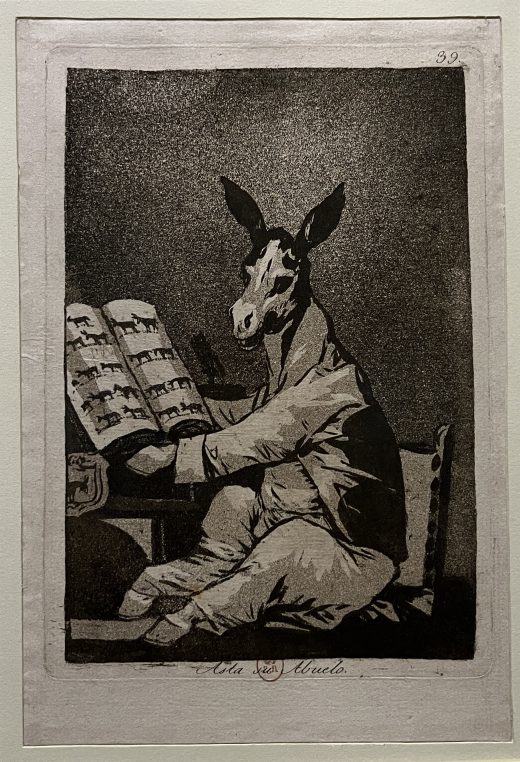 Towards the end of the show and just before the portraits by Carjat, a series of Goya prints “Los Caprichos” owned by BnF follow a self-portrait by Delacroix as Hamlet lent by the Louvre and a portrait of Edgar Poe by Manet, all artists whom he loved. A few drawings by Constantin Guys add a little lightness to this period which follows a more dramatic one devoted to opium, haschich and “Artificial paradises”. 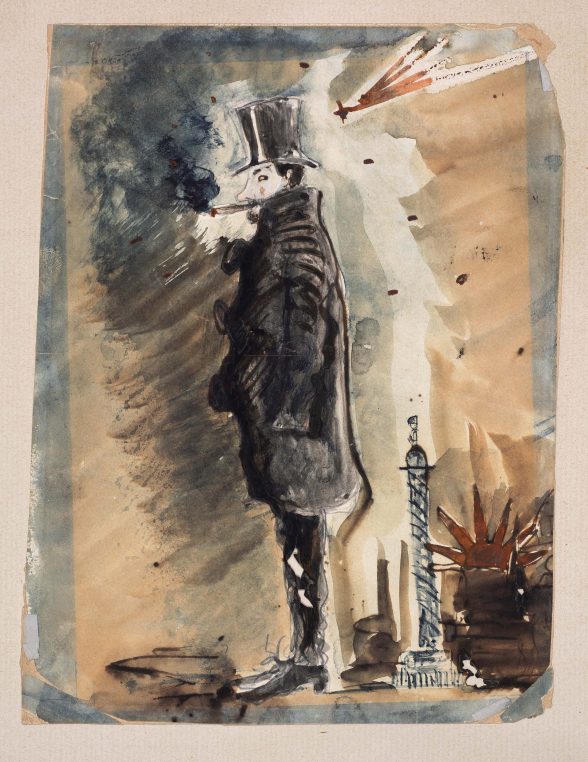 Self portrait under the influence of Haschisch,1842-1845, private collection

Thanks to the fantastic work done by the curators of the show and many loans from public institutions, this exhibition is very visual and pleasing aesthetically as well as fascinating intellectually. The wealth of Bibliothèque Nationale’s collections and the scientific research, are culminating here in this high quality presentation. It is a relief and a luxury to see such a well crafted show.

Until February 13, Baudelaire, La Modernité mélancholique at BnF  and Giuseppe Penone next door until January 23.

Until January 27 at BnF

One Comment on “Baudelaire and his symbolist friends at Bibliothèque Nationale”