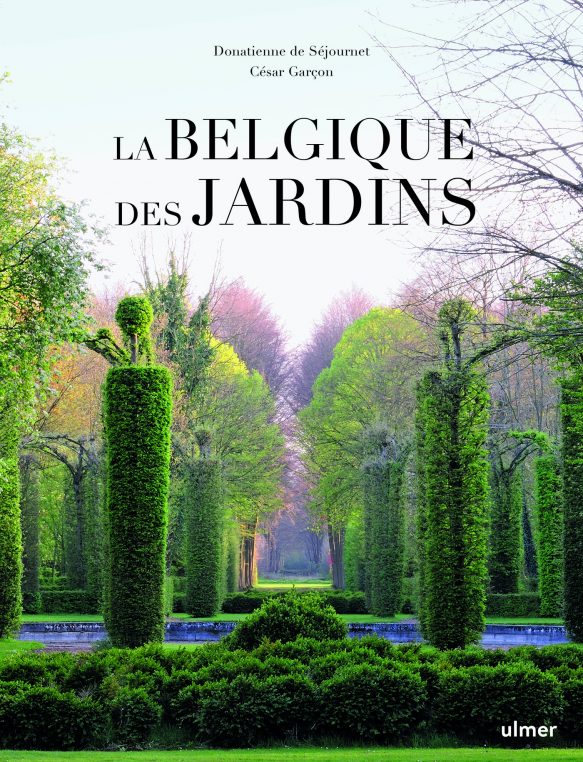 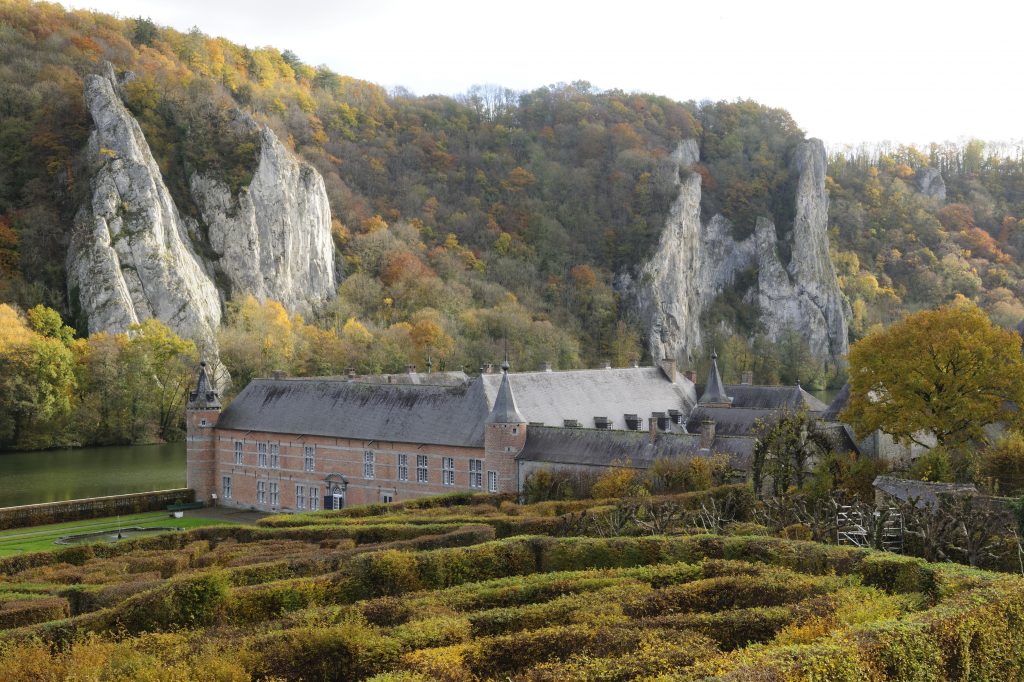 Along the Meuse river, the Renaissance castle of Freÿr with its formal terraced gardens

Christmas time is coming up and with its usual beautiful picture books. This one “La Belgique des Jardins“, is the fruit of a collaboration between Donatienne de Séjournet, one of the best expert in gardens in Belgium and César Garçon who proved with his “Italian gardens” book (2015), that he knows garden architecture well.  Some are the classical ornaments of castles like Beloeil, Freÿr and Hex which can be visited, some are royal like the greenhouses of Laeken, others are arboretums like the famous Kalmthout created by Jelena de Belder or Wespelaar which belongs to Philippe de Spoelberch. The more recent one created by Erik Dhont, is owned by couturier Dries Van Noten and Patrick Vangheluwe, in Rigenhof near Antwerp. 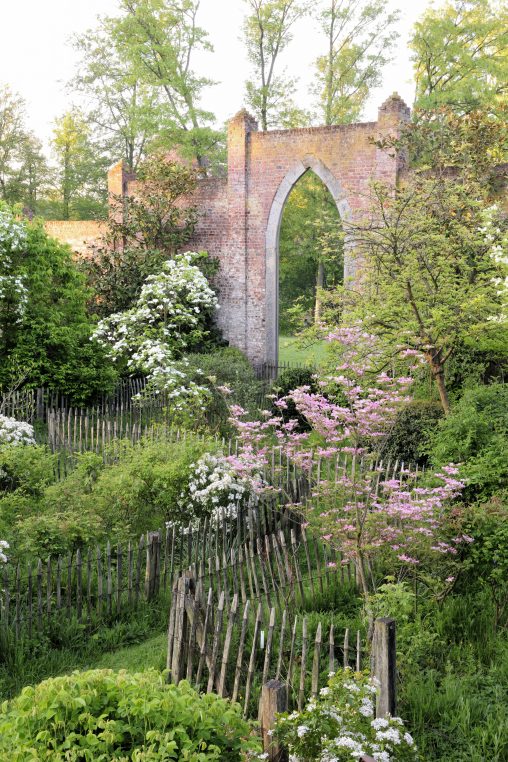 The Neo gothic arcade was added to this vegetable garden in Waterloo. Here the dogwoods are in full bloom

Belgium like Great Britain has a perfect climate for gardens with lots of water and a temperate climate. There has always been a strong tradition of gardeners and plant collectors in this small country which looks abroad for new ideas. While mixed borders were inspired by Great Britain, staged gardens were imported from Italy, and the art of topiary was explored by its three major gardeners René Perchère, Jacques Wirtz and Erik Dhont. The reputation of Belgian greenhouses has grown over the years and the different expeditions to collect rare plants from Amazonia to Oceania, have comforted this country as a leading horticultural empire. At Journées des Plantes de Courson and now of Chantilly, Belgian greenhouses are always the stars. Jelena de Belder was one of the actors of Belgium’s garden renaissance. Her husband, a diamond dealer in Antwerp, described her with a fun sentence: “My wife buries diamonds into the ground” meaning that she spent all his money, planting rare species. 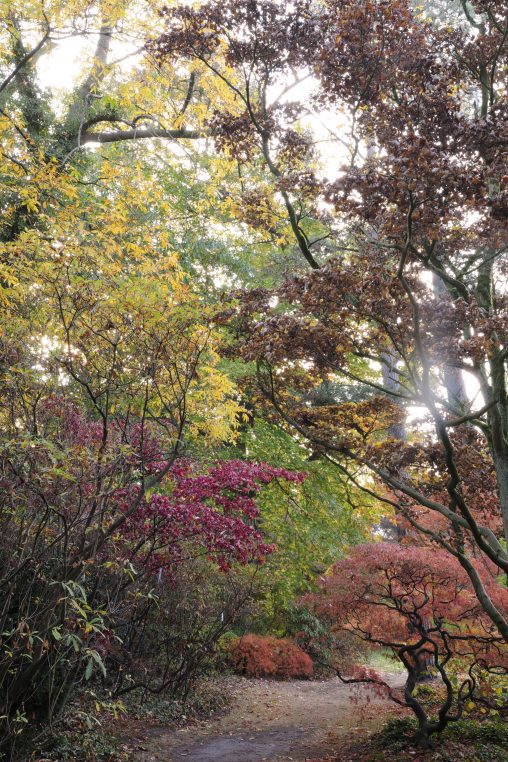 The book is slightly disconcerting since some chapters are devoted to a specific castle and garden, like the spectacular charmilles of Beloeil, another concentrates on “drèves”, a special Belgian word for alleys of trees of which the most spectacular is Oostkerke with its bent poplar trees. I had always wondered why my best Belgian friends live on “Drève de Bonne Odeur”, now I know what it means. I liked the cellar for vegetable chapter where you see how the owners of chateau d’Hex, Ghislain and Stéphanie d’Ursel, grow root vegetable like cardoons and pumpkins indoor, so they can be picked all winter without freezing. 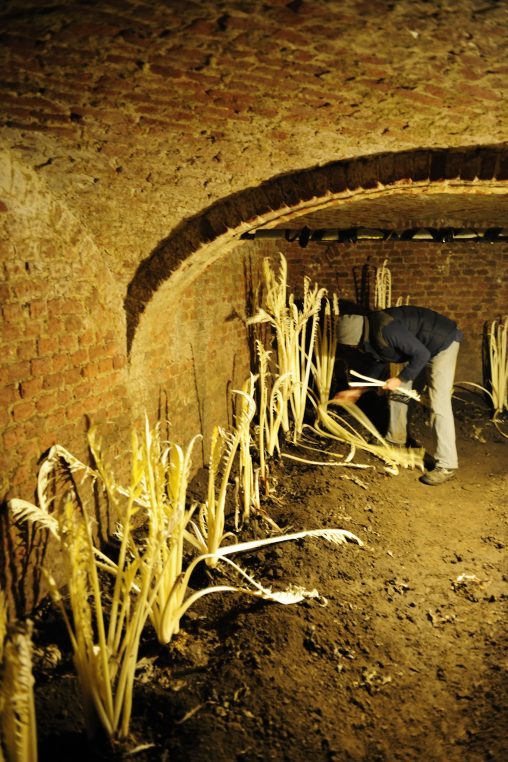 Cardoons are being cultivated in the cellar at Hex

There are of course fabulous rhododendron and azaleas properties like Oude Gracht, which used to belong to 19 th century cereal merchants the Bunge.  Its garden, like the one at Hex, was inspired by Capability Brown. There is also a chapter on  a small Museum in the middle of Brussels in Uccle, the Van Buuren museum, conceived by René Pechère. And many more castles and views that I wish I could share with you here.

César Garçon has travelled to Belgium at every season in order to catch the magic of winter and frosted fields, of the spring with the magnificent magnolias of Wespelaar, and of course of the late summer in Rigenhof where cosmos, roses, lavender explode in the flower garden. 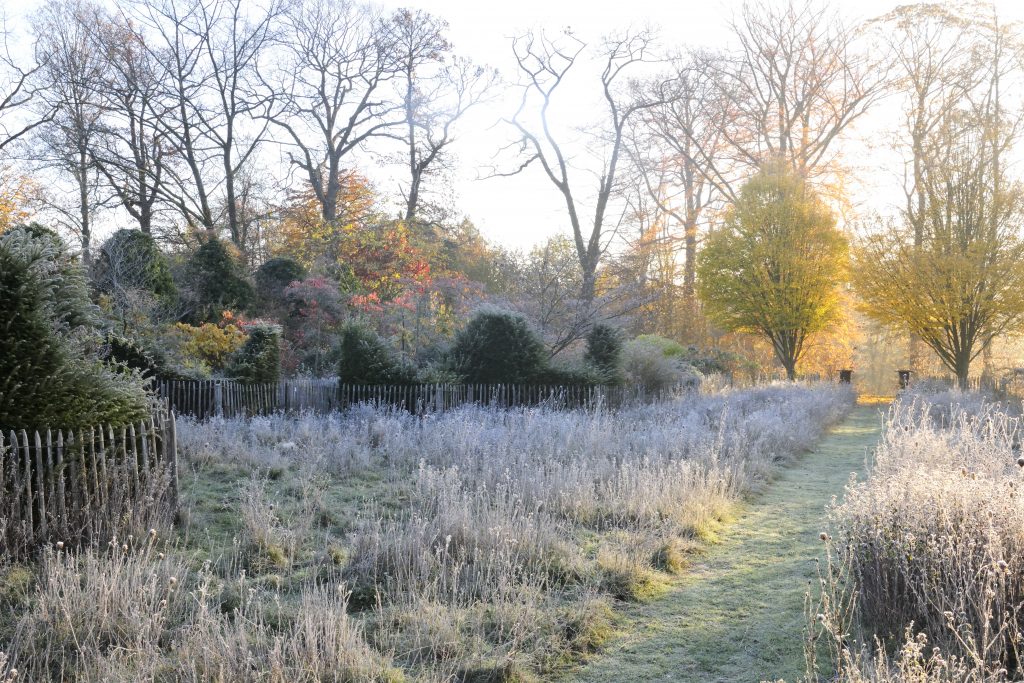 Frost creates a nice contrast with the sun foliage in Waterloo

Formal gardens are well represented with the admirable garden by René Perchère in Seneffe,  Jacques Wirtz in Botermelk and also Fondation Kreftenbroeck, near Brussels, where very long hedges of beach or cedar trees run through the fields. 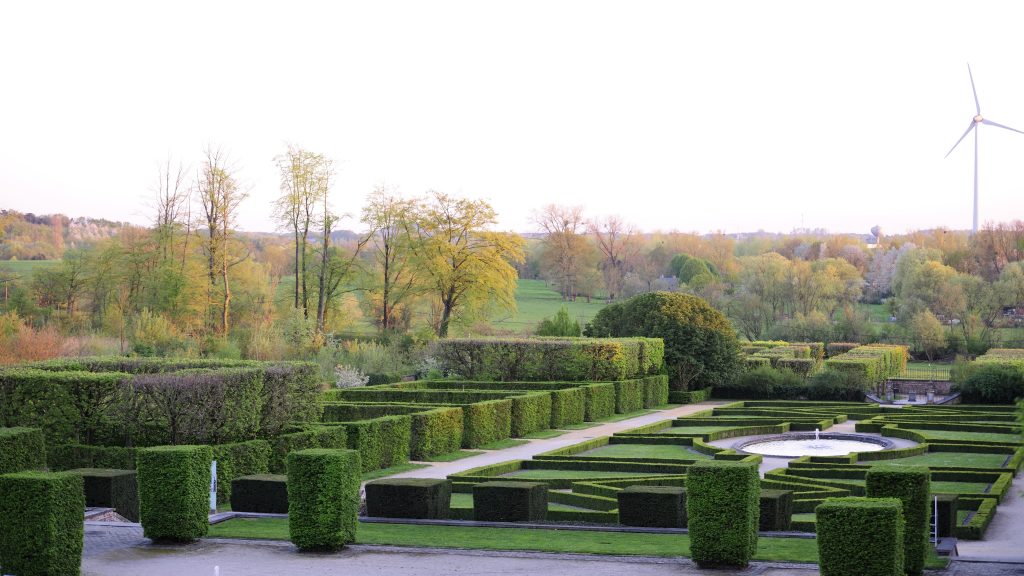 The book “La Belgique des Jardins”, by Donatienne de Séjournet and César Garçon is published by ulmer Editions. It is full of brilliant ideas even for a modest garden and you can order it from Galignani (39,90€) where César Garçon was going to sign copies on November 5. If you specify the name, he will make sure to sign them for you and they can be delivered worldwide by the bookstore or picked up on rue de Rivoli if you live nearby.

2 Comments on “Belgian gardens are celebrated by photographer César Garçon”