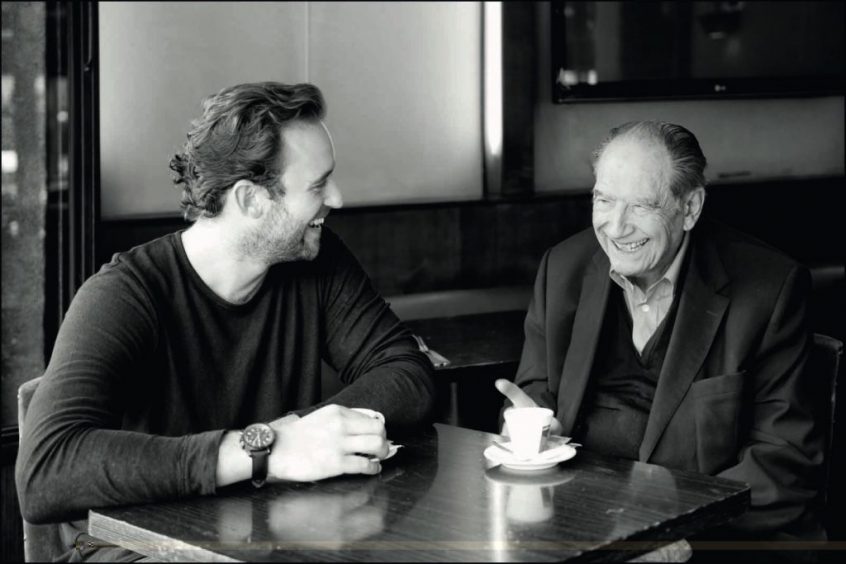 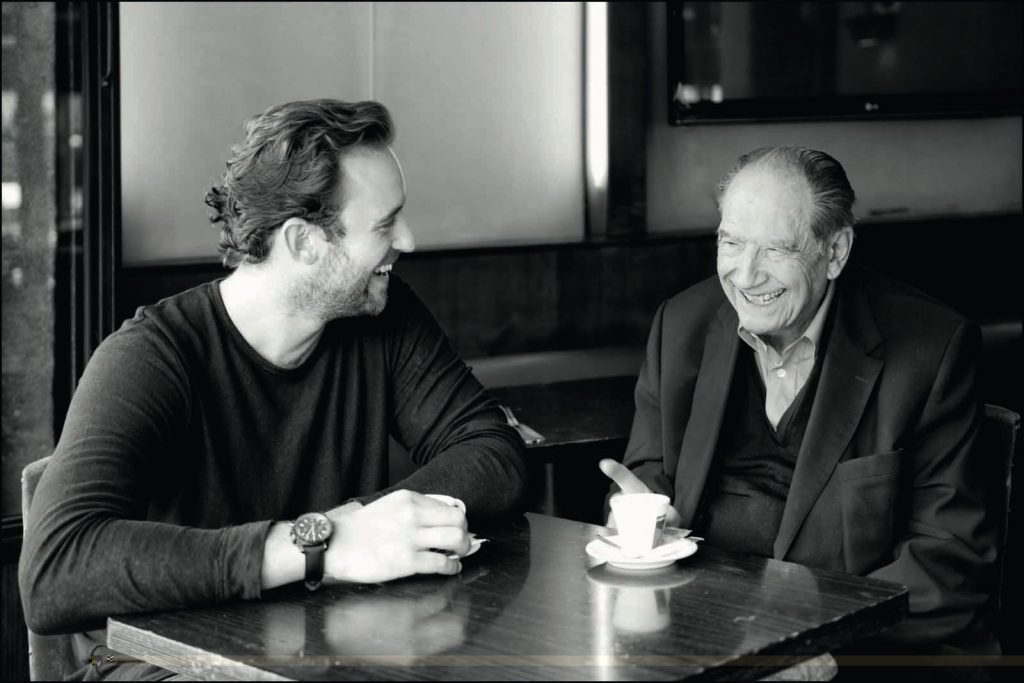 The day after he died, his office was well organised with a new manuscript still unpacked, lying on his desk. Five « orphans », Christophe, Marie-Claire, Philippine, Tristan and Anne, his faithful collaborators, were meeting to discuss the future of the house which he had founded 30 years ago when he left Editions Julliard. Bernard de Fallois was one of the last great publishers of the 20 th century in Paris and had become a sort of legend when, well past the age of retirement, he published Joël Dicker, a 32 year old Swiss writer who sold millions of copies of his « La Vérité selon Harry Québert ». 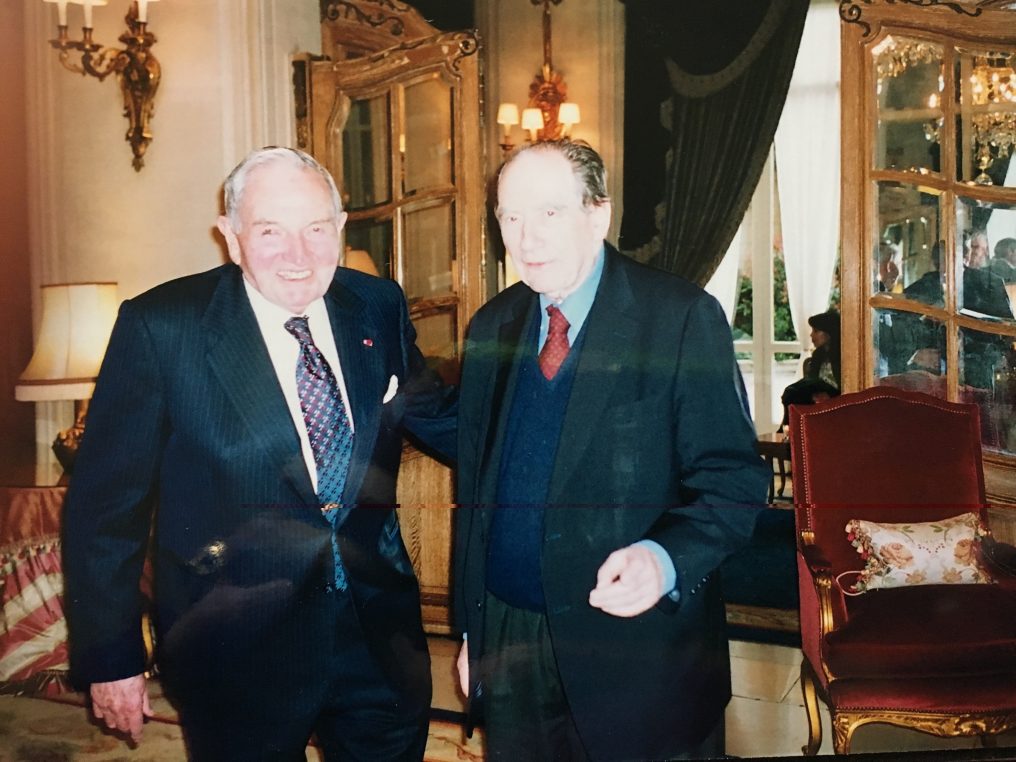 With David Rockefeller, whose memoirs he published in French, in 2006, at Hôtel Ritz

And Joël Dicker was also present, one of the « orphans », who had visited him in the hospital where his heart failed him on Tuesday January 2nd. His next novel, “La Disparition de Stéphanie Mailer” will come out next March.

At 91, Bernard de Fallois drove to the office every day in a very old Mercedes listed as “voiture de collection”,  and was better informed than anyone in Saint Germain des Prés. His career as a school teacher at Ecole Stanislas and later as general manager of Livre de Poche and of Hachette, had put him in contact with the greatest French minds and he had kept in touch with many of his former students who still read, translated and wrote books for him.  Claude Jonis and Dominique Goust among them.  At the beginning of his career, he became instantly famous for having discovered and published two manuscripts by Marcel Proust found in the writer’s niece’s attic: “Jean Santeuil” and “Contre Sainte Beuve”. 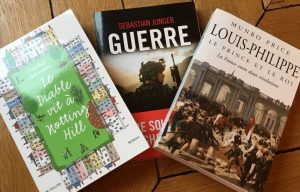 Very close to Marc Fumaroli from the Académie Française and Jean-Claude Fasquelle who used to run Editions Grasset, he controlled world rights on Marcel Pagnol, had published Cardinal Lustiger, Raymond Aron, Alain Peyrefitte, Michel Zinc, Jean Marie Rouart, Simone Bertière, Isabelle Hausser, Robert Merle, Jacqueline de Romilly and so many great historians who formed a family around him. He was a close friend of Georges Simenon.

He published in France brilliant British authors such as Rose Tremain, Rachel Johnson, Esther Freud, Antony Beevor, Munro Price and Kate Atkinson, even though he did not read English.

He was very anti-American and immensely disliked litterary agents, but did well with Sebastian Junger, David Rockefeller, Harper Lee, Kavita Daswani and Marion Zimmer Bradley. Fiercely independent, he had stopped attending the French Book Fair many years ago and published his authors with passion and love, promoting them endlessly among his academician friends. He never spoke of himself and interviews of him are rare. 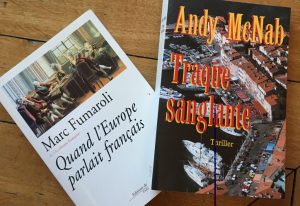 Very recently Simone Bertière, his exact contemporary, who published sixteen historical books with him, appeared on the channel 5 talk show “La Grande Librairie”, with all the younger writers remaining silent while she talked about her ” Story of Ulysses”, one of the last books published by Bernard de Fallois. Next May, the House will publish a book “Viva il latino, Story and beauty of a useless language” by Oxford professor Nicola Gardini on the importance of studying latin.

He was the best “teacher” in how to detect a good story and took his time explaining the qualities of a book to his staff. But he was also a faithful friend and did not hesitate to publish a book that he knew would not sell more than a thousand copies out of friendship. Mostly he was a soldier of literature and could be very cruel with bad writers… At the funeral mass at Notre Dame de Grâce de Passy, Jean Claude Casanova, a friend of sixty years and Joël Dicker, a friend of six years, both spoke brilliantly, representing a wide range of friendships and intellectual passions. Bernard de Fallois’s curiosity for everything was one of the themes they raised. His great faithfulness was the other.

As he was getting older, we all thought he was eternal. It is very sad to see him go.