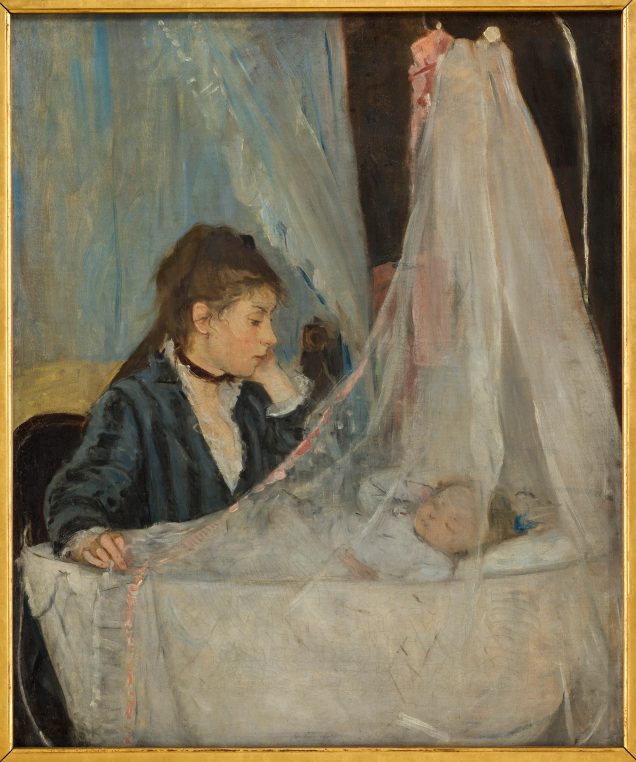 Berthe Morisot, the French lady impressionist painter, had never had a retrospective at Musée d’Orsay since it opened in 1986 and her last exhibition was in 1941 at the Orangerie. After studying painting as an amateur and learning “plein air” painting with Jean-Baptiste Corot at 19, she decided to make a career of it and showed at the Salon for the first time in 1864: she was 23. When Edouard Manet meets her, he paints twelve portraits of her. She then marries his brother Eugène, a lesser painter,  in 1875, and goes on a honeymoon on the Isle of Wight where she portrays her husband.  She died very young at 54, leaving behind over four hundred paintings, mostly portraits or figures. Through this exhibition one discovers how modern her lifestyle and her painting was. 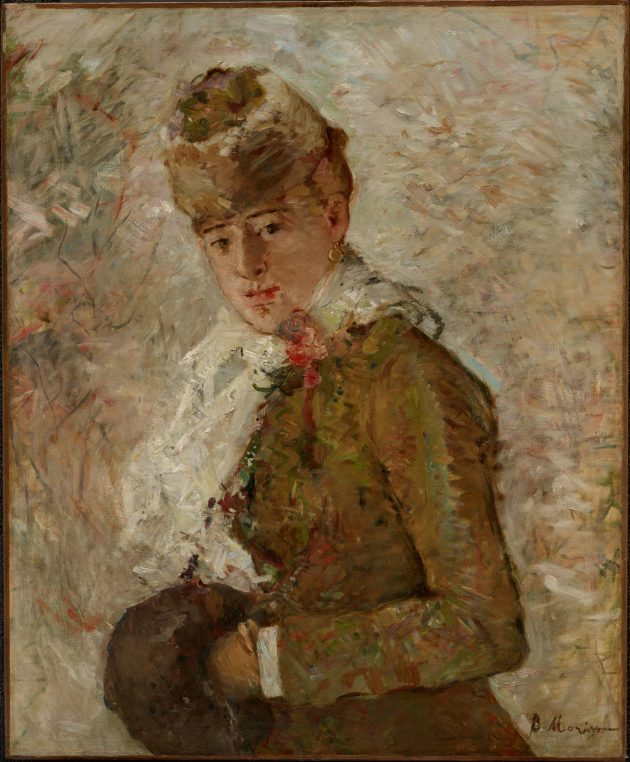 Berthe Morisot was keen to become independent from her milieu and to emancipate herself. She often used her older sister, Edma Pontillon, as a model, in modern interiors and domestic decors. She adds drama and poetry to the mystery of her daily scenes in all paintings. She also loves to paint outside, using the light for her very natural images of children and mother, always trying to render the atmosphere of modern bourgeois living. In 1876, she starts painting ladies at their toilette, revealing intimate underwear and usually setting them in her own bedroom. For the Impressionists, fashion and modern clothes were an essential part of “new painting” and she abuses of the theme. 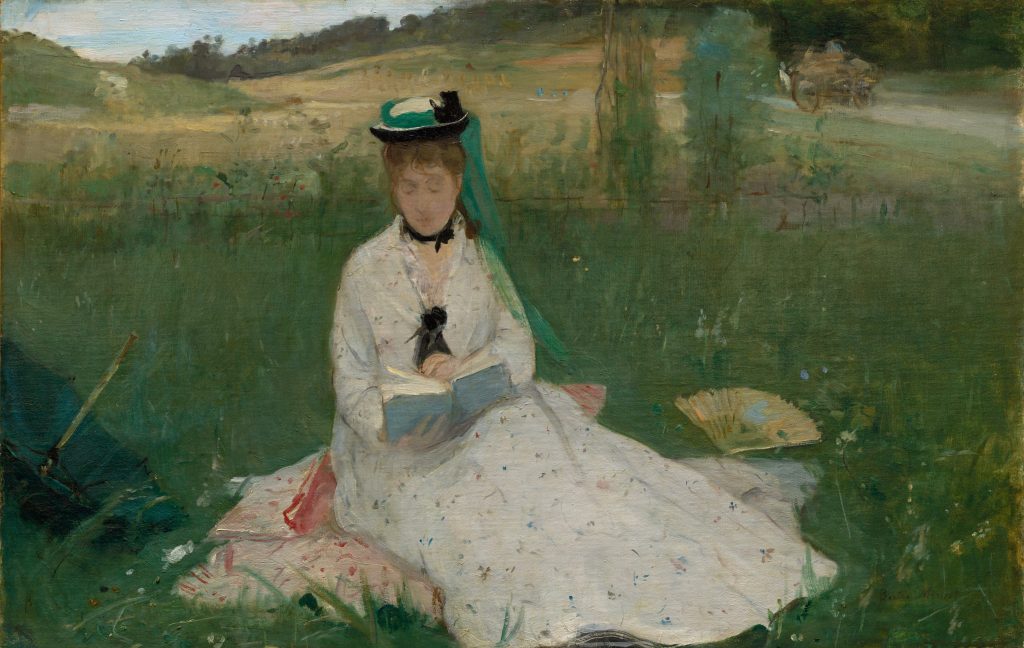 She paints flowers, accessories, furs in great detail like in her “Jeune femme en toilette de bal”, 1879, where she suggests the elegance of her milieu. The painting is the first to be acquired by Musée du Luxembourg in 1894. She often tries to capture the instant, painting water in movement with a bird swimming and is also known for her “unachieved” paintings. At the time, critics said that her natural feminine shyness made her leave her paintings unfinished. Nowadays, experts think that in the contrary, she firmly decided to leave part of the canvas unpainted and thus gave her work the possibility of a future. 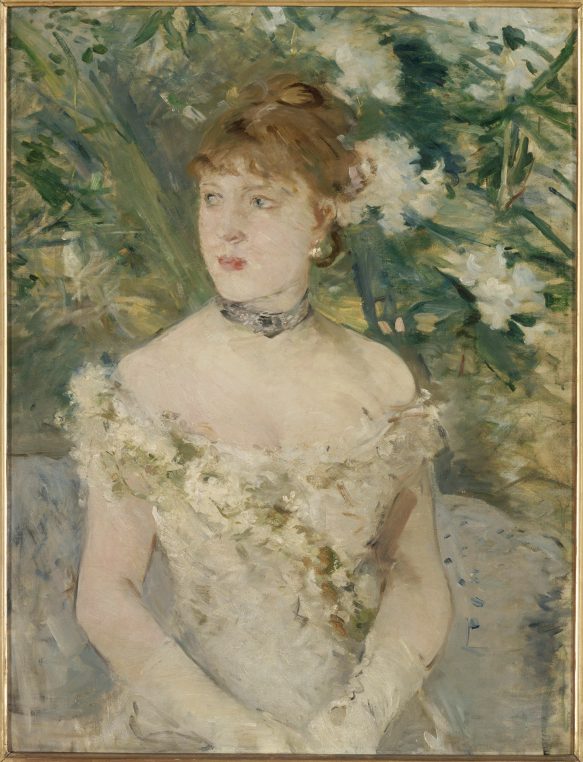 Like her American friend, Mary Cassatt, she loves painting nannies and babies, her daughter Julie with a dog or playing an instrument, also maids who work in her home. She dies of influenza at 54, after taking care of her sick daughter. Julie in return will organise a very large exhibition of 390 of her works at Galerie Durand-Ruel the following year. 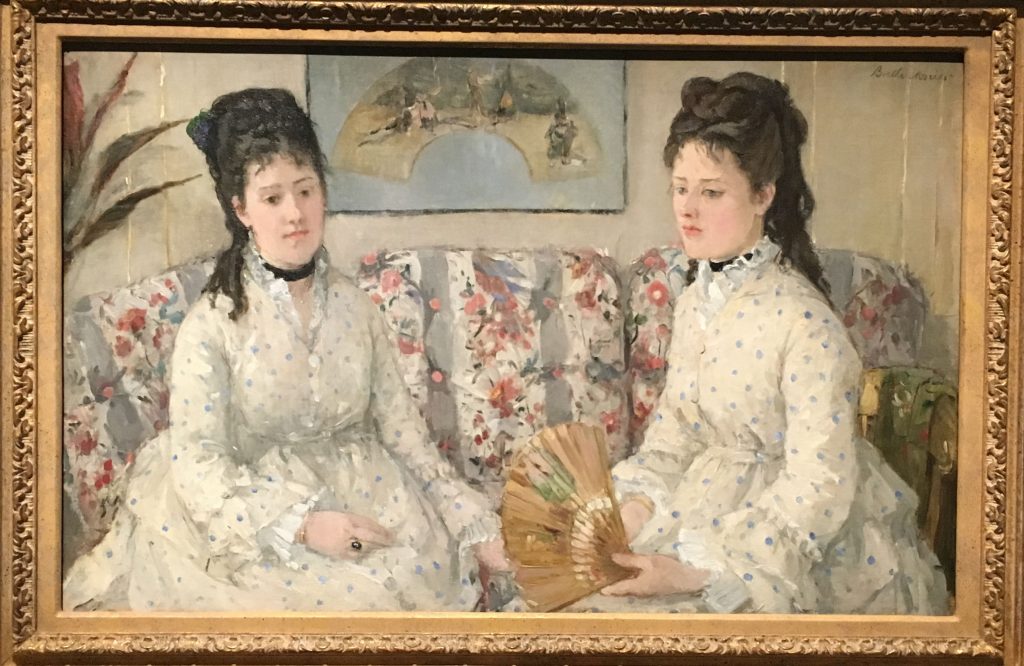 Individually, all paintings are interesting but the accumulation of similar themes in the rather small rooms of the Orsay galleries, makes the show very repetitive.  There might be a lack of intimacy or the grey background makes the hanging a little dreary? The show is nevertheless exceptional since many works have been lent by private collectors and foreign museums especially from the U.S., Great Britain and Europe.

Until September 22 at Musée d’Orsay. I you buy your ticket in advance you can enter through the right hand door without queuing.