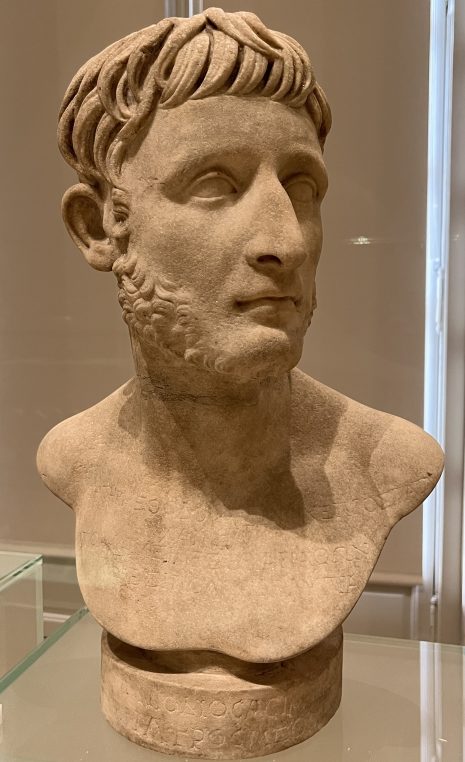 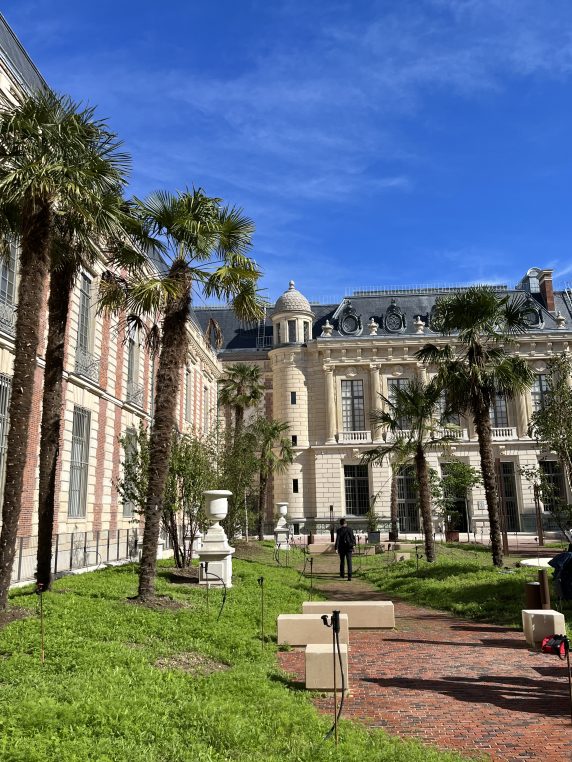 The new gardens on rue Vivienne have a Mediterranean look

The main entrance of the Bibliothèque Nationale Richelieu (French public library) is now on rue Vivienne, facing Le Grand Colbert restaurant. And a large garden “Hortus Papyrifera” with palm trees and many “paper trees”, created by Gilles Clément, welcomes you instead of the more austere courtyard of rue de Richelieu. Once you walk inside, a modern staircase in aluminum and steel, designed by the architects Bruno Gaudin and Virginie Brégal, has replaced the wooden one which I loved but the museum on the first floor, with 900 objects on show, is definitely more attractive than before. 261,3 million € have been spent for 22 million documents over twelve years of restoration and 42 kilometers of shelves reinstalled. This second phase of restoration is completing the first one (in 2016), when the beautiful salle Labrouste, dedicated to INHA (art history institute), and the library of Ecole des Chartes were reopened on rue de Richelieu. 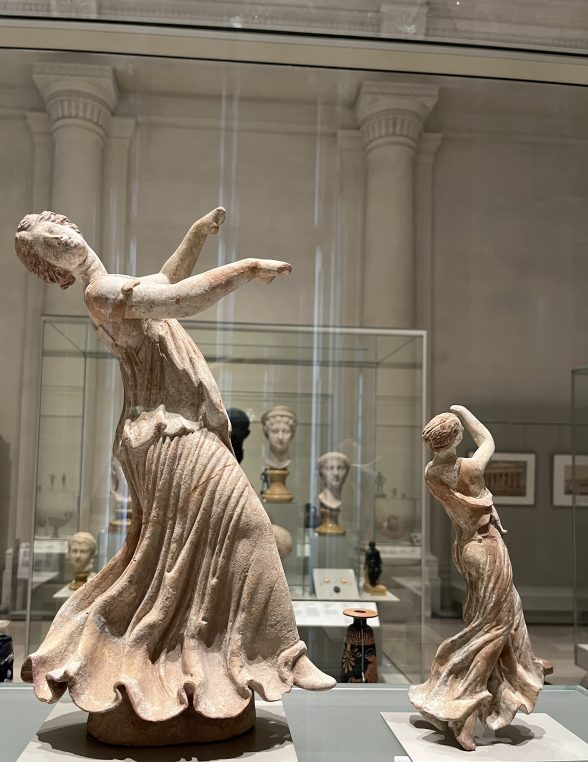 Dancers, Taranto, Italy or Centuripe, Sicily, 3 rd-2nd BC, bequeathed by Janzé in 1865

Discovering the fantastic Royal collections of Greek statues, of cameos end precious stones, of maps and globes, coins and prints was a true pleasure. They were put together by minister Colbert in 1666. The following year, he acquired a collection of 80 000 drawings and prints from Abbé de Marolles. During the Revolution, hundreds of thousand s of books and manuscripts were seized from the clergy and the emigrants. And the magnificent 17 th and 18 th century salons and reading rooms give a good idea of how precious the books collected by Cardinal Mazarin were already considered at the time. 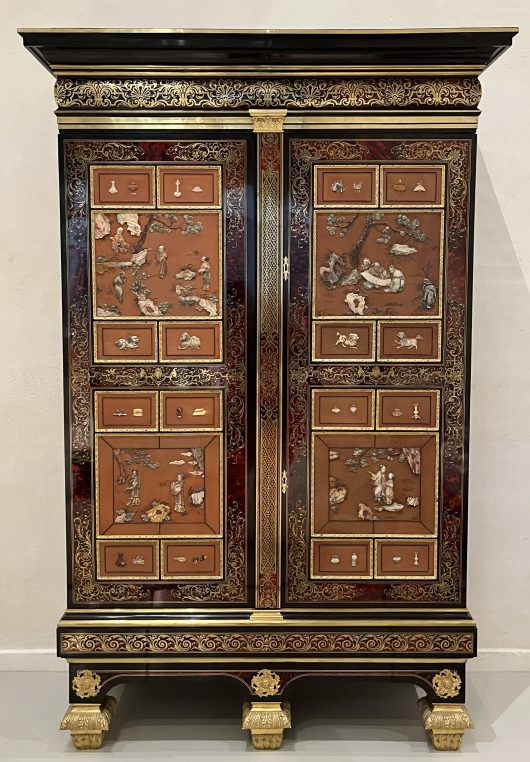 The Salle des Colonnes, the Cabinet Précieux, the Salle de Luynes, the salle Barthélémy, the Salon Louis XV, and the Rotonde precede the 45,55 m on galerie Mazarin, where treasures of St Denis basilica, Medieval globes and prints are shown under the fabulous ceiling painted by Giovanni Romanelli. In Galerie Mansart, a temporary exhibition space will show Molière’s world until January 15 and Degas in black and white from May to September 2023. 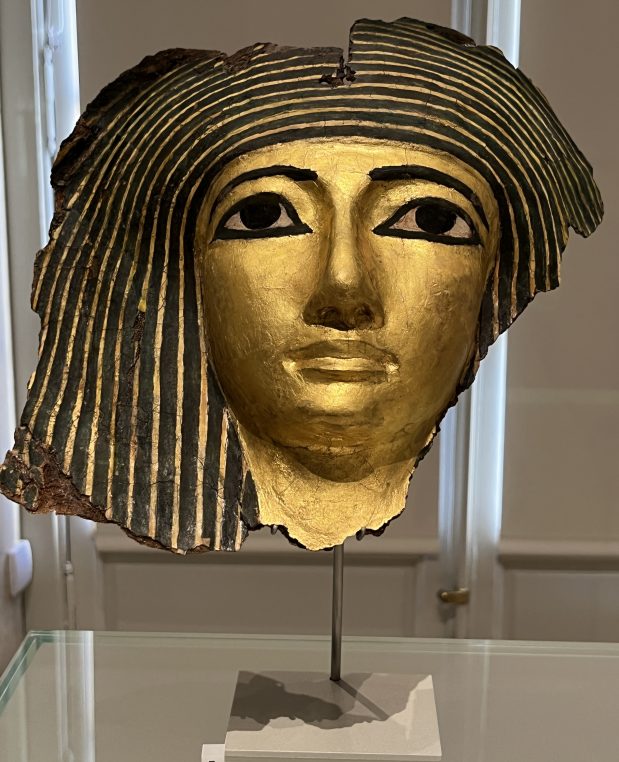 The Library includes very specialized departments: one for Arts and Performing Arts, one for Maps and Plans, one for Prints and Photography, one for Medals, Coins and Antiques and one for Music. The large Oval reading room opened in 1936, is a public space open to all. 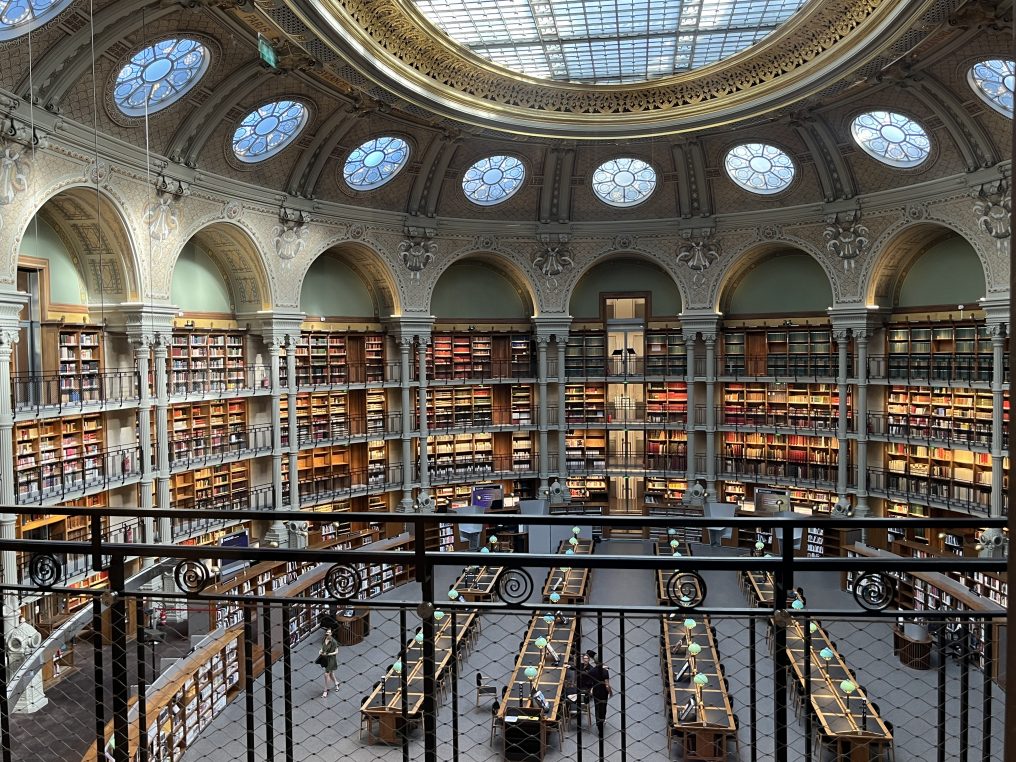 The garden and reading room are open for free. Entrance to the museum and special rooms is 10€. It is worth discovering this new space and why not picnic in the garden while the weather is still beautiful… Bibliothèque Richelieu from Tuesday to Sunday, 10 am to 6 pm. 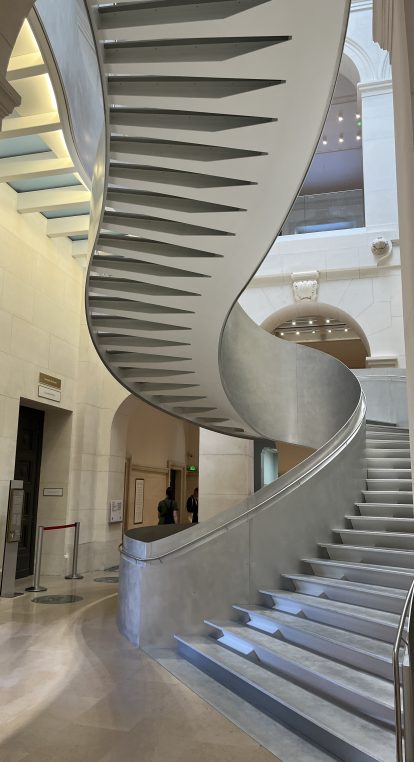 If you want to do research make sure to go on the website first because for shortage of staff, documents can only be ordered in the afternoon. This has created a stir among scholars and a major strike among the personnel… For the first time in its recent history, the library is not operational all day…