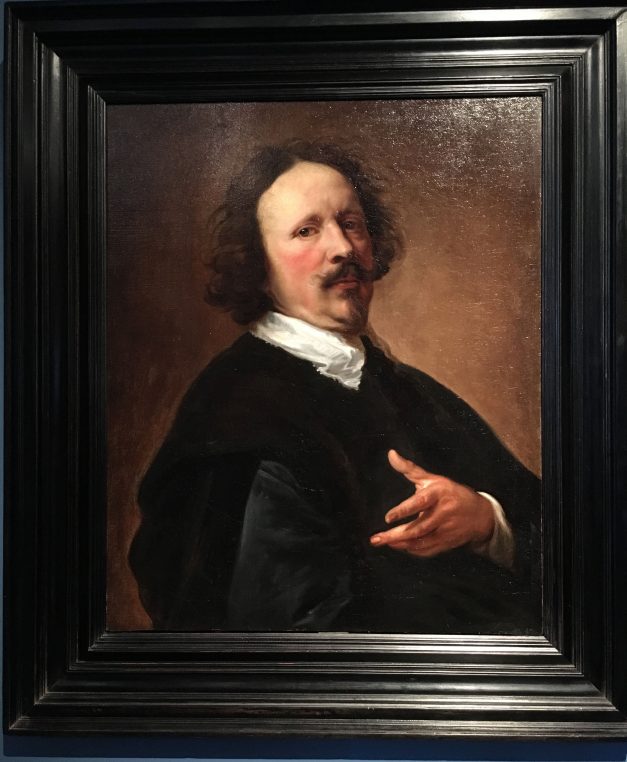 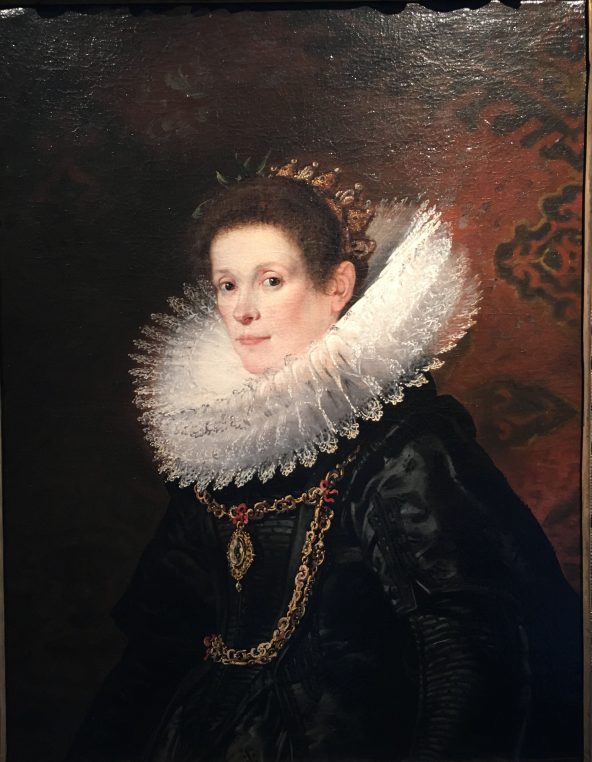 You have probably never been to Cassel, on the border of France and Belgium where Marshall Foch had his headquarters during the First world war,  and neither had I until last week when I was invited to see a new exhibition on Gaspar de Crayer, 1584-1669, a follower of Rubens and Van Dick, who was famous until the 19 th century. French revolutionaries seized his religious works in churches and this was the end of his popular success. The Musée de Flandre in Cassel is showing fifty of his paintings and drawings lent by the Prado, the Metropolitan Museum, the Kunsthistorisches in Vienna, the Courtauld, the Scottish National Gallery, and the Uffizi in Florence…  And in Ghent, on the other side of the border, six of his very large paintings are shown at the Museum of Arts as well as in the cathedral. 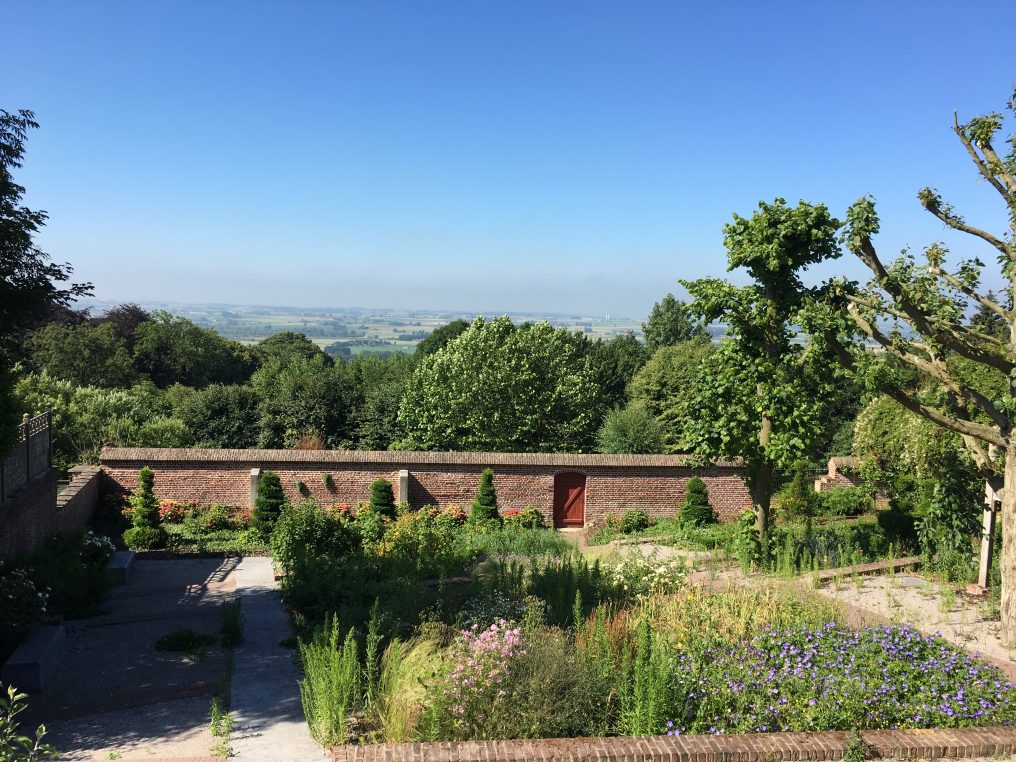 The view from the museum in Cassel over the whole valley

Flanders comprises a large country from the Netherlands to France through Belgium. Cassel, a town famous for the victory of Louis XIV th’ brother, the Duc d’Orleans over the Dutch and Spanish  and  in 1677,  was annexed by the French. It was two week s ago elected “Favorite village of the French” on a popular television broadcast anchored by Stéphane Bern. When Gaspar de Crayer moved from Antwerp to Brussels in 1607, it was still Flemish and it now holds the only museum devoted to Flemish art from the 16 th century to today including a piece by Jan Fabre.

You reach it from Paris through the train station of Hazebrouck (90 mins) or from Lille or Dunkirk (a 40 mins drive) and Kurtrijk is an hour away. The countryside is delightful with potato and hops fields all around its little hill, 146 meters high, from which Napoleon loved to contemplate the area. 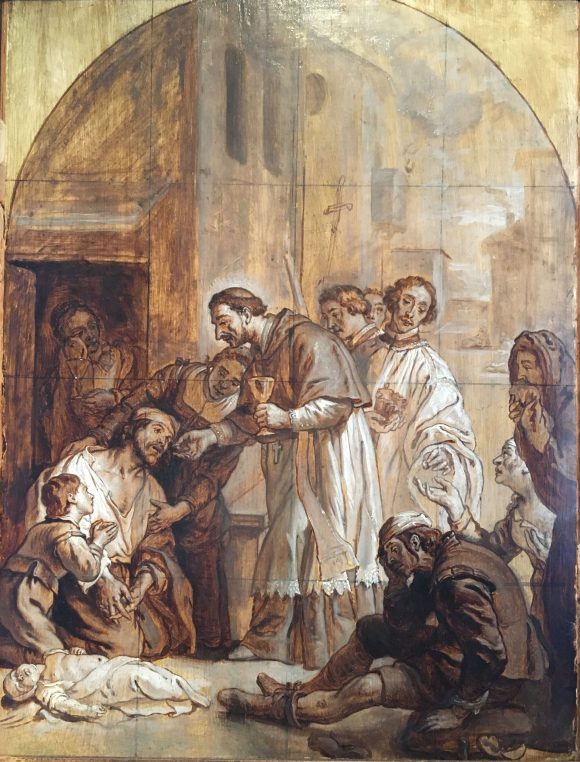 Gaspar de Crayer has left many large church paintings and court portraits. They are all incredibly impressive in size and quality and the intimacy of this fairly small museum gives them even more power. His portrait by Jacob Jordaens in the first room establishes his fame of the time as do the two portraits that Van Dyck made of him which could not ravel from England but are in the catalog.

A bust in terra-cotta realized by Lucas Faydherbe, a disciple of Rubens, with a large Spanish medal, asserts his role as court painter to Philippe IV. But Crayer never left his country, contrary to Rubens who spent his life travelling from one country to the other as a roving ambassador. 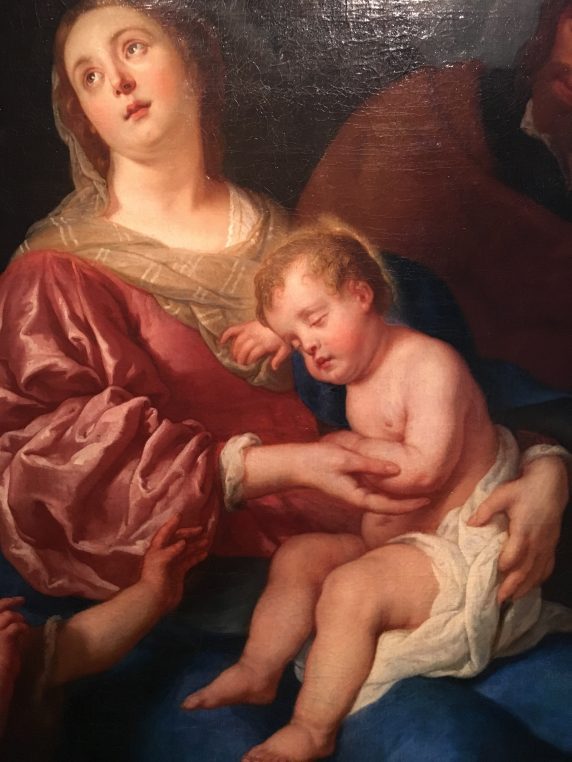 In the second room hangs one of the most beautiful paintings of the exhibition, “Saint Catherine’s martyrdom”, painted in 1622 for the cathedral in Kurtrijk. The mix of horses and dog, her jewelry lying on the ground, her magnificent hair and silk taffetas dress give a glorious image of her sufferings.  In the same room the “Visitation” and the “Annunciation” are both stunning. 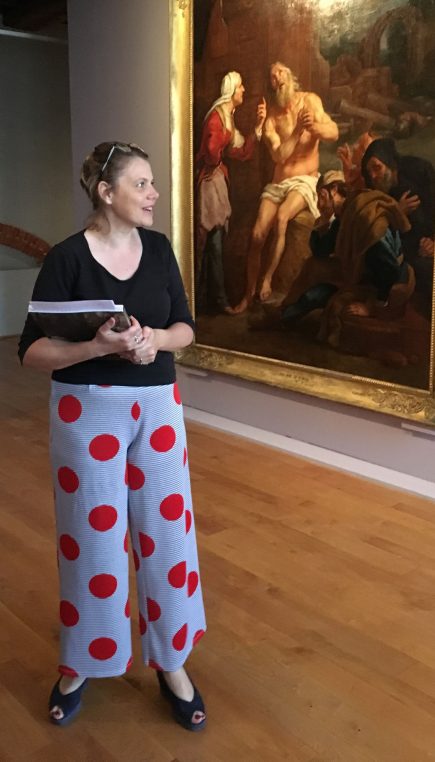 The diretor fo the museum, Sandrine Vézilier-Dussart in front of “Job mocked”, 1619

But still better awaits us. I was totally electrified by “Portrait of a woman with a lace collar”, where the unknown lady has a face so modern and so charming that one forgets the huge gold chain and black silk or velvet gown. The details of the lace and the color of her flesh are infinite and you can look at the work from close up or from afar. The effect is just as strong. It is hanging in the middle of four male portraits and another lady with a fan. 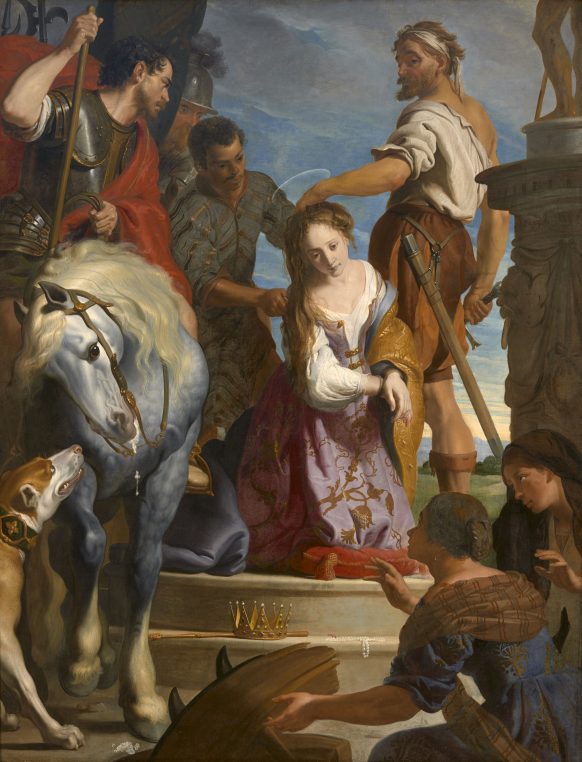 And this beauty just precedes the small intimate room where Philipp IV of Spain stands magestically on two large canvases, one with his dwarf and one without, in his parade armor made of leather, which is in itself a fashion chef d’oeuvre. It is believed that since Crayer never left the Flanders, he painted it after an engraving of the King of Spain. 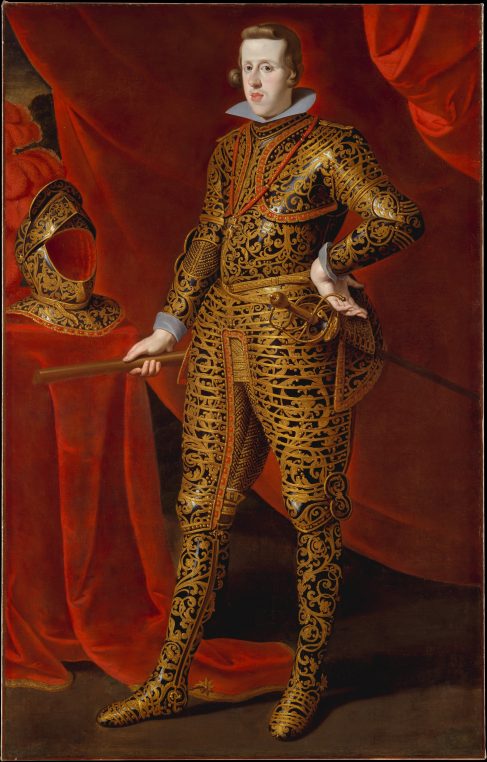 The large room that ensues is devoted to his work for the counter reform. Fighting protestantism which had spread over Holland, he painted extensively some diptychs and altarpieces  for convents and churches. His large “Christ on the Cross”  dominates the space where one can discover a charming baby Jesus in the “Holy family with St John the Baptist” which came from Florence and was reunited with its “modello”, an oil on wood. Two “St John the Baptist” and “Saint Mary Magdalena cutting off her hair” conclude this precious exhibition. 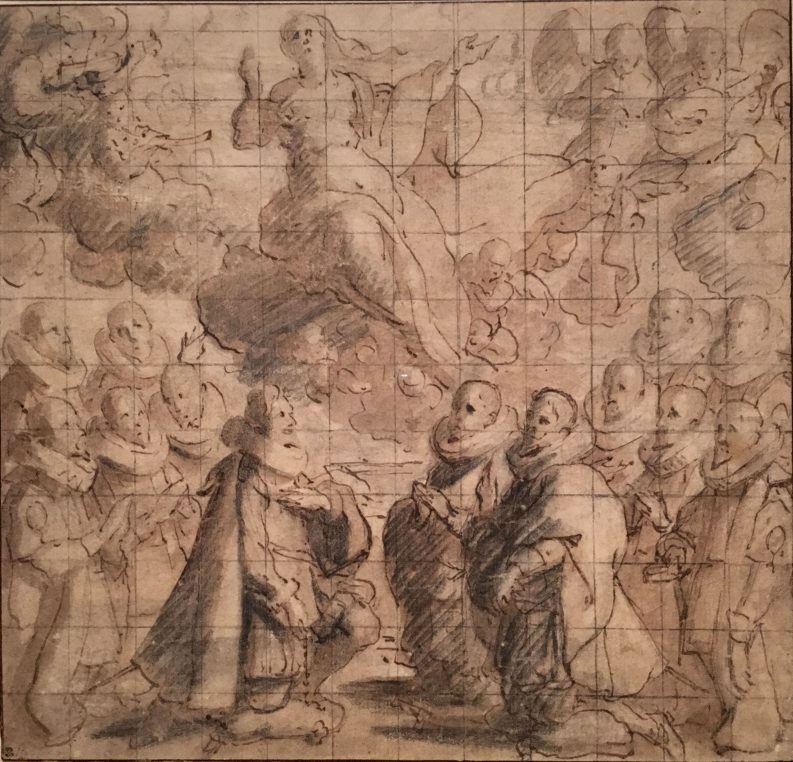 The Assumption of the Virgin, in the company of the Guild of Arbaletiers of Brussels, late 1620’s, Custodia Foundation, Paris

A room with drawings and sketches gives some respite in the middle of the visit with the study of a young Maure very reminiscent of Rubens’. 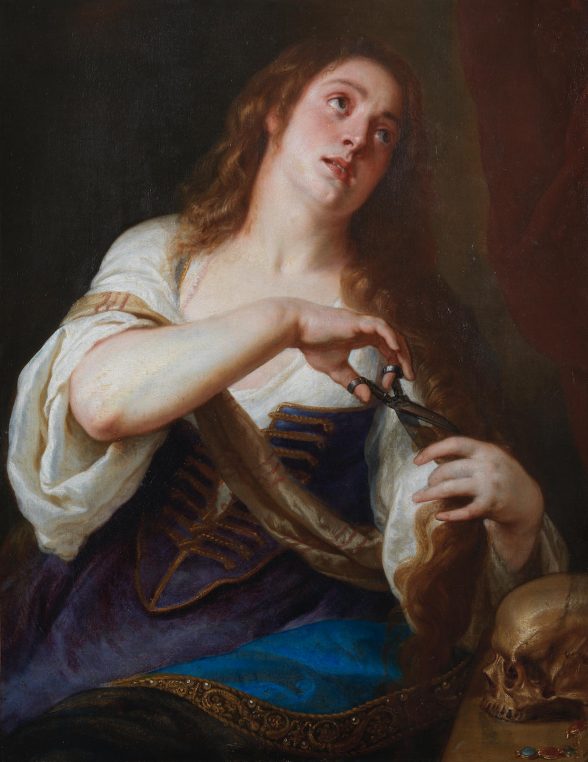 This show is enchanting in many ways. It deals with many unknown paintings, it is beautifully exhibited and curated by Sandrine Vézilier-Dussart, who runs the museum, and art historian Alexis Merle du Bourg. It is not too long, a huge quality in art shows today, and it takes you away from the motorways of culture, introducing you to a rich area of museums situated between Lille, Roubaix and Calais. The permanent collection of the Museum is full of satiric paintings and happy depictions of carnivals and laughs which are common in Flemish art. 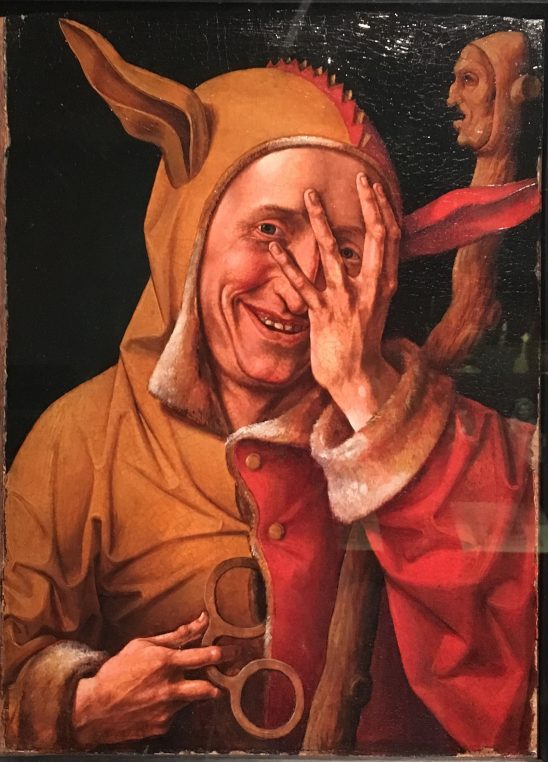 Master of 1537, “Portrait of a mad man looking through his fingers”, permanent collection of Musée de Flandre

You can also visit the Piscine in Roubaix, the Musée Matisse in Le Cateau-Cambrésis and drive north to Calais to see the museum of lace or south to the Louvre Lens. The Hotel Chatellerie de Schoebeque looked very nice from the outside but I have not tried it.