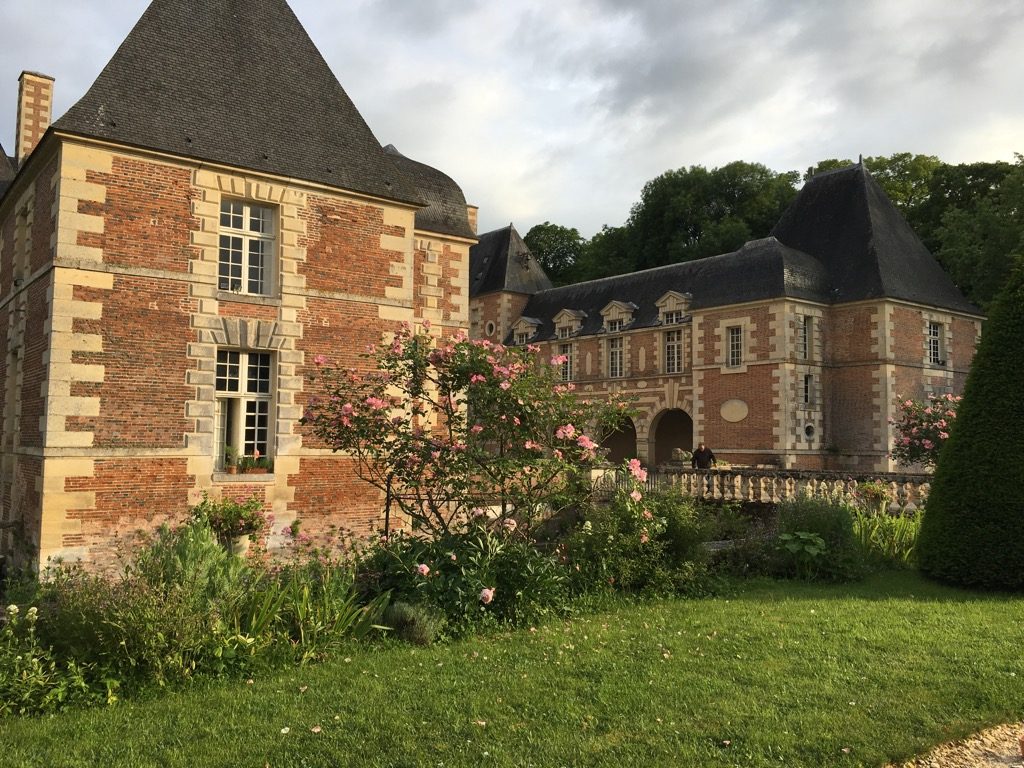 Château de Jussy was built in the 17 th century in Berry, in the center of France

Celebrating Jean and Jacqueline d’Amécourt’s wedding anniversary in their extraordinary château de Jussy was a moving moment and a consecration of friendship and family ties. 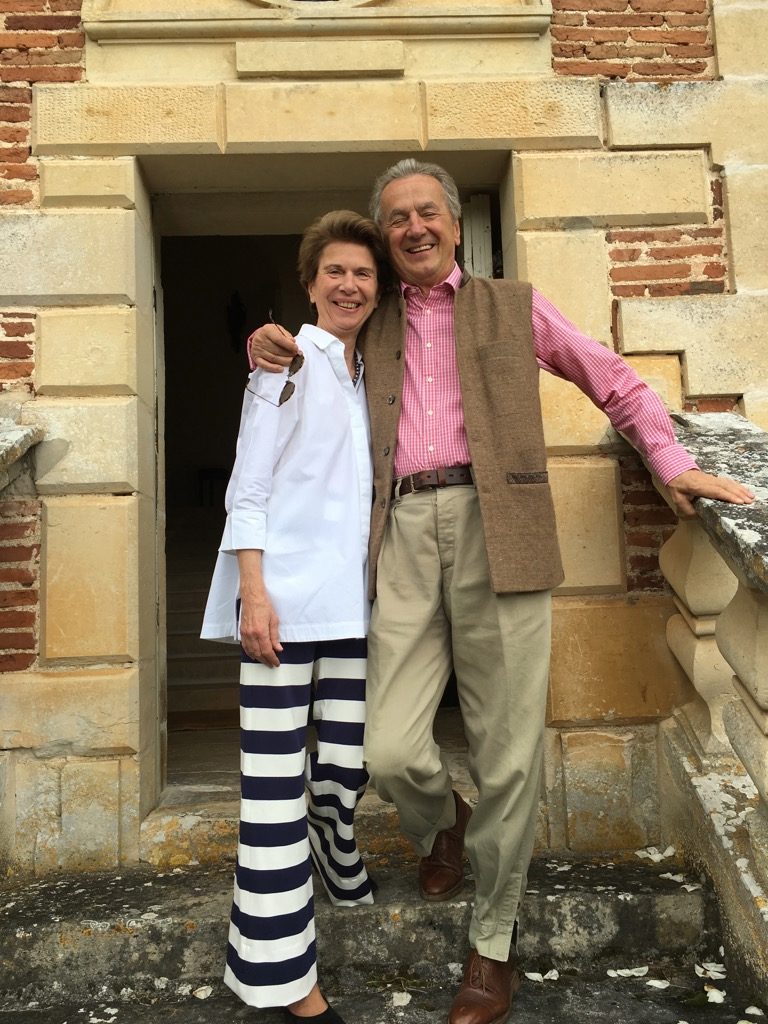 The ambiance was similar to a coming out party where everyone knows each other and the atmosphere was relaxed and cheerful in the most sophisticated and refined 17 th and 18 th  century decor. Jean’s sisters and best friends from when he prepared l’ENA were there, as were Jacqueline’s siblings, cousins and contemporary art colleagues. 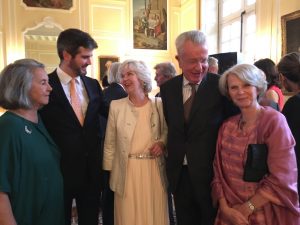 The three children, Paul, Sarah and Louise, who are scattered around Europe, had come to  celebrate their parents but in the end, the house and garden were the center of all attentions. 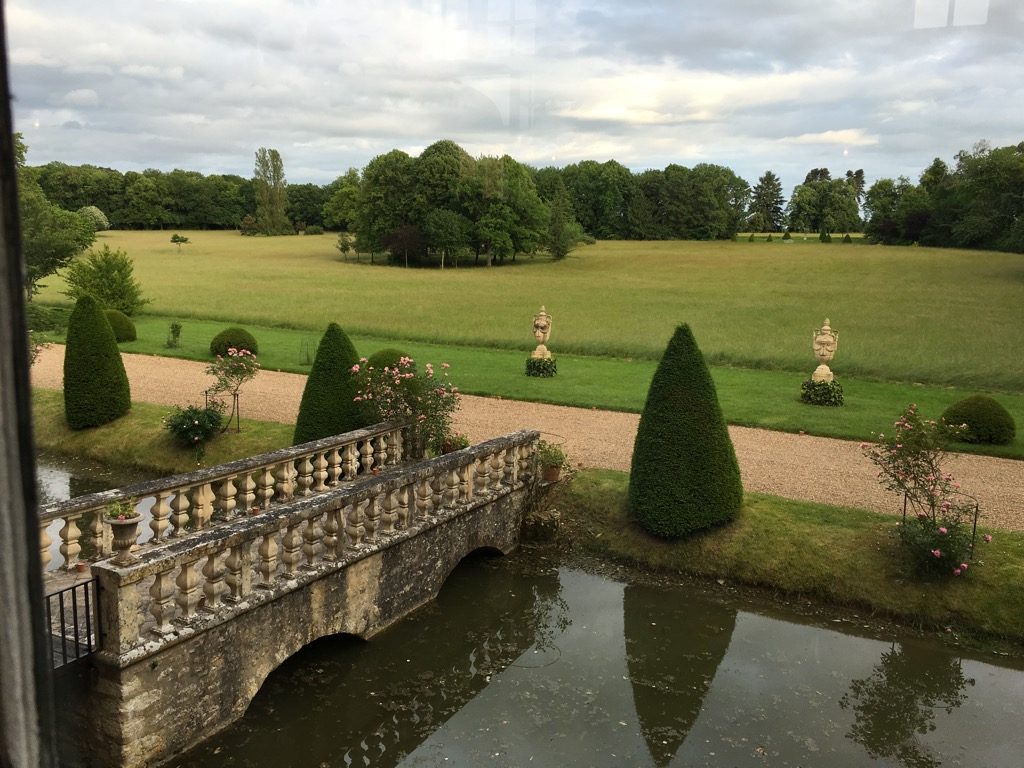 From his posting as French ambassador to Kabul, Jean brought back Afghan roses which are planted between the wheat fields and an alley of chestnut trees. It was the perfect time for roses which are spectacular this year, and they were climbing up the brick and stone façade thirty meters high. The moat around the castle was covered with blue and pink flowers and walking in through the courtyard on the first evening, was a magical moment. 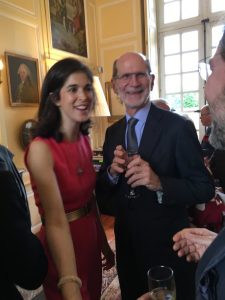 Dinner with an excellent Château Malartic was served by old style waiters who had come from nearby Bourges ( famous for its cathedral) and most of the guests, who also maintain castles in the Sarthe, Normandy or in Cher, were suddenly transported back to the 60’s, when spending the summers in the countryside with nothing to do but play tennis and bridge, seemed like a normal holiday.

A few diplomat friends of Jean and Jacqueline had come and no one lacked conversation, but what touched me the most was their son Paul’s speech when he addressed his parents as if they were getting married again today, with their three children as witnesses. The beautiful daughters were beaming with joy and seemed politely happy to see their parents’ old friends. 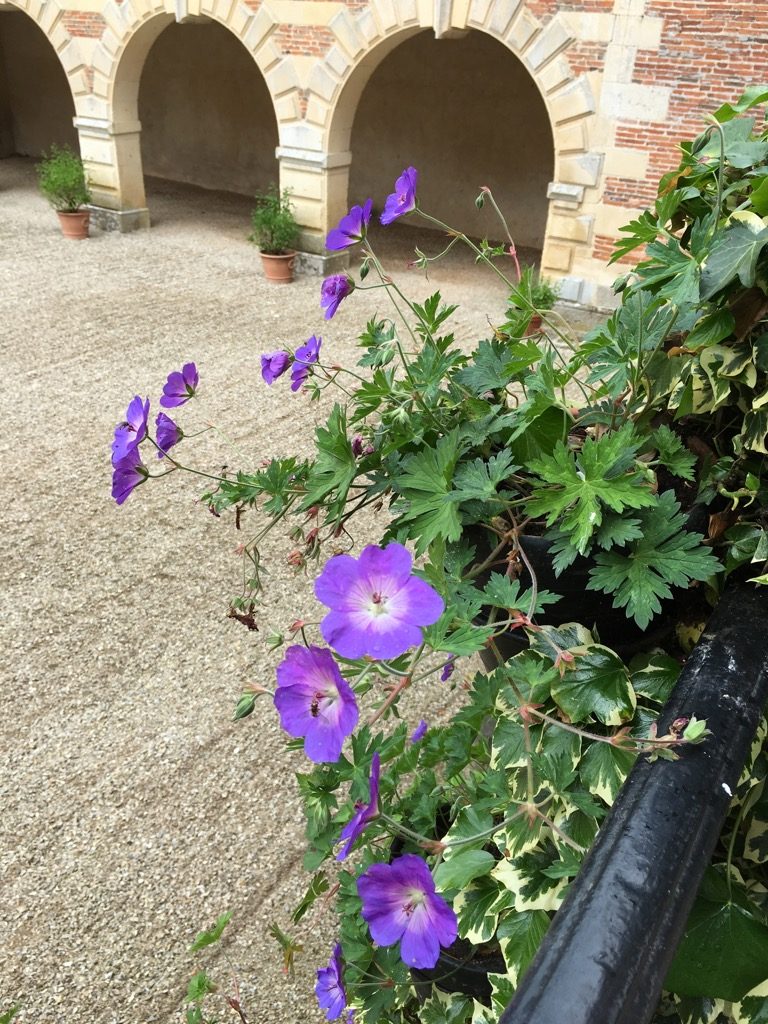 Lovely details of perfectly raked gravel and geraniums in the courtyard

The week end was a magical respite from daily life, with the enjoyment of beauties of the past and the warmth of real affection in a fairy tale castle. 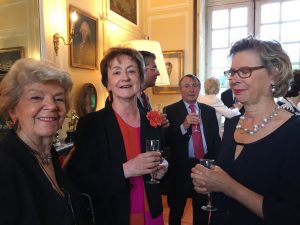 Jussy is a listed historical monument which is open to the public every afternoon in July and August. The remarkable park is being planted constantly with new tree species and the anniversary we were celebrating was also the consecration of forty years of embellishment of the property ! 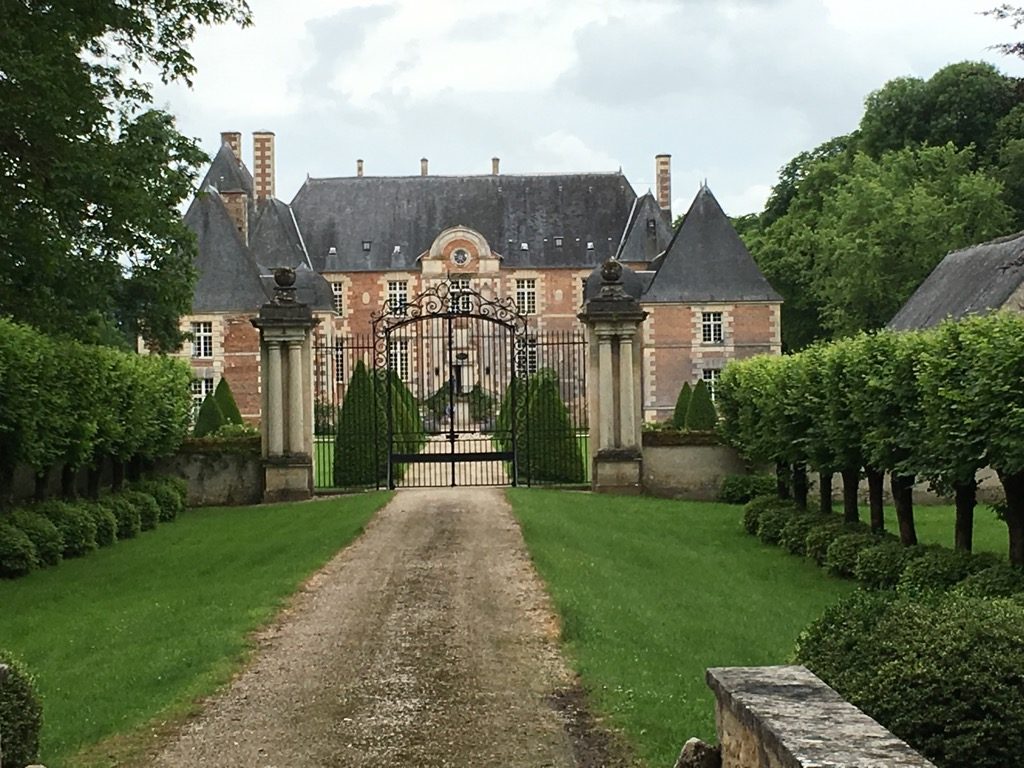 The smashing vision of a fairy tale castle when arriving 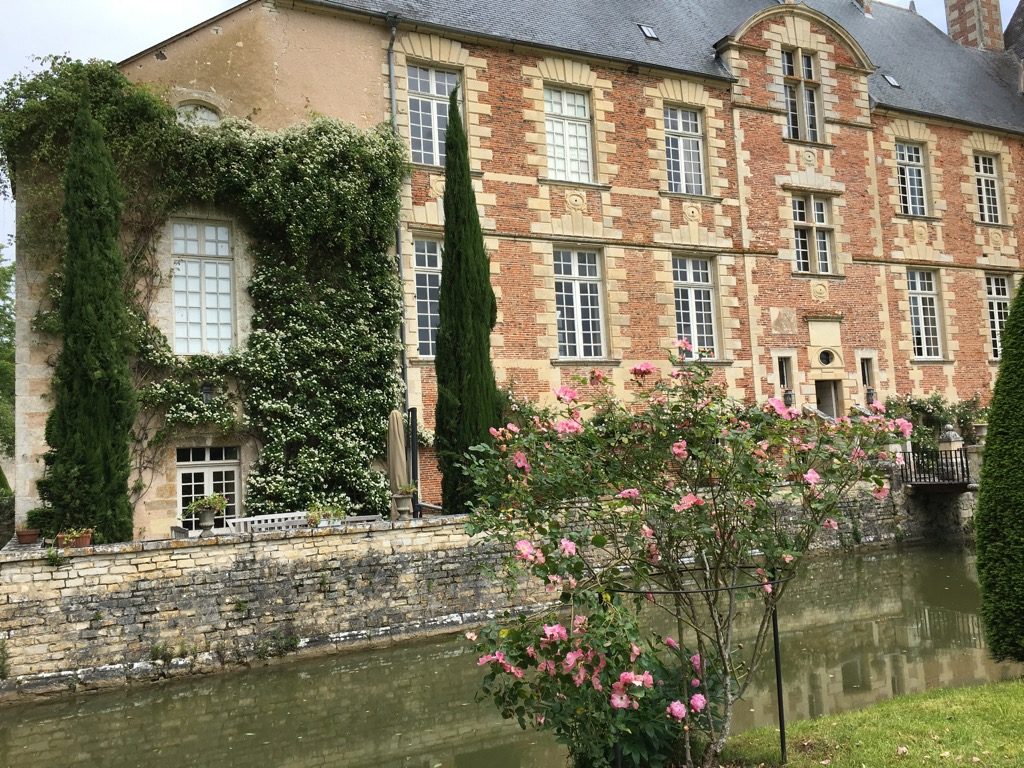 A thirty meter high rose bush climbs on the façade 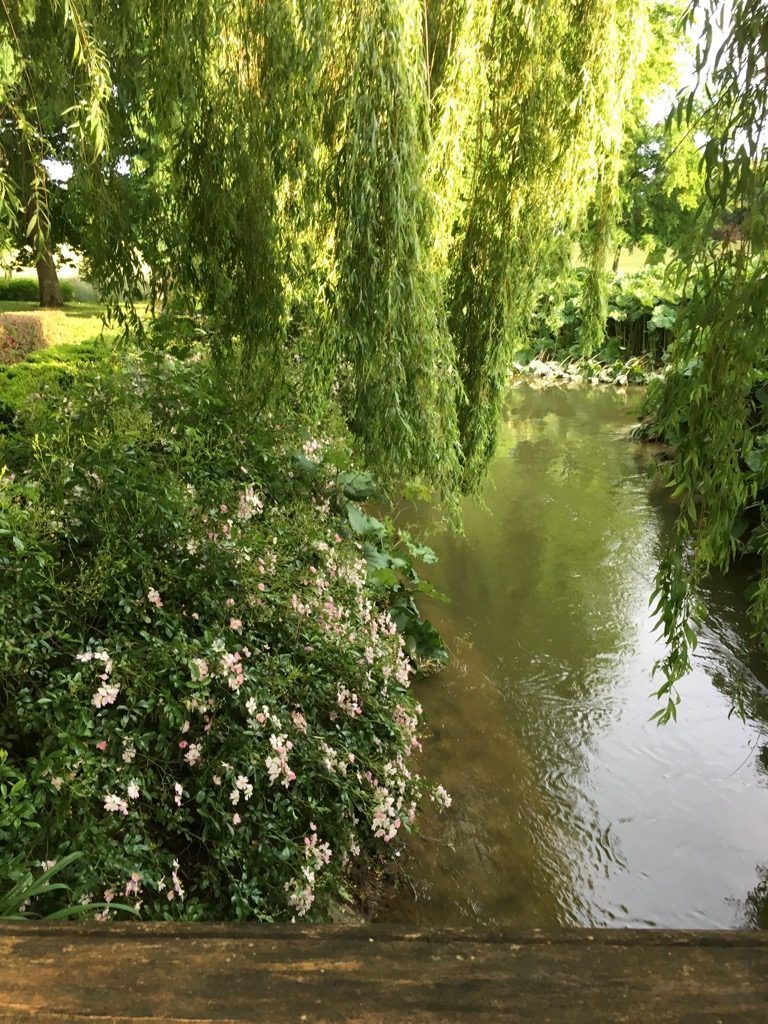 Roses and weeping willows in the moat surrounding the castle

4 Comments on “The celebration of a marriage, and of a house”