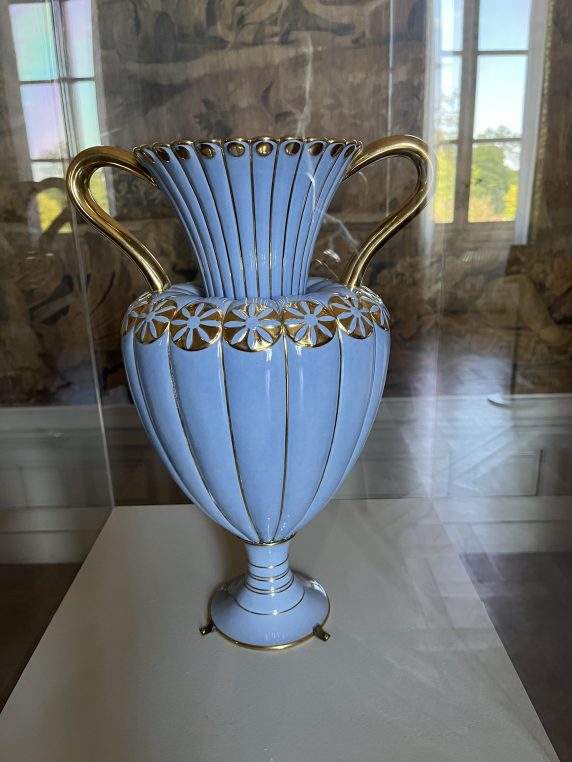 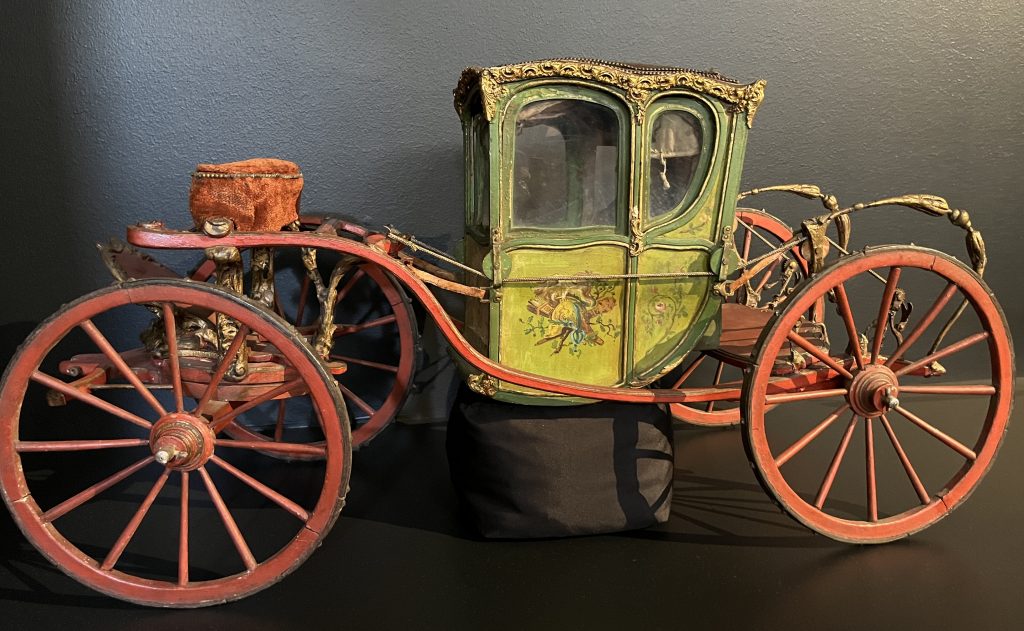 Model of a berline with suspensions as described by Garsault in his treaty of cars in 1756, ca 1760-1770, preempted by Château de Compiègne

Les Journées des Plantes de Chantilly were sunny and very relaxed this spring and a few new exhibitors attended, whom I loved. Prince Amin Aga Khan, the faithful garden lover, presented the Jurys and Alain Baraton, Head Gardner of Versailles, awarded the different prizes with a good sense of humor. Hélène Fustier who founded Les Journées des Plantes in Courson in 1982, was there talking to everyone and curator Mathieu Deldicque was preparing, at the Jeu de Paume, his exhibition of Dürer drawings and engravings which opens on June 4. Thirty minutes away at Château de Compiègne, curator Etienne Guibert was unveiling five years of new acquisitions which are both modest and extraordinary, and include Napoléon III’s yacht’s furniture and models of 18 th century carriages with suspension. It is fantastic to still discover affordable historical pieces of art at auction and in galleries. 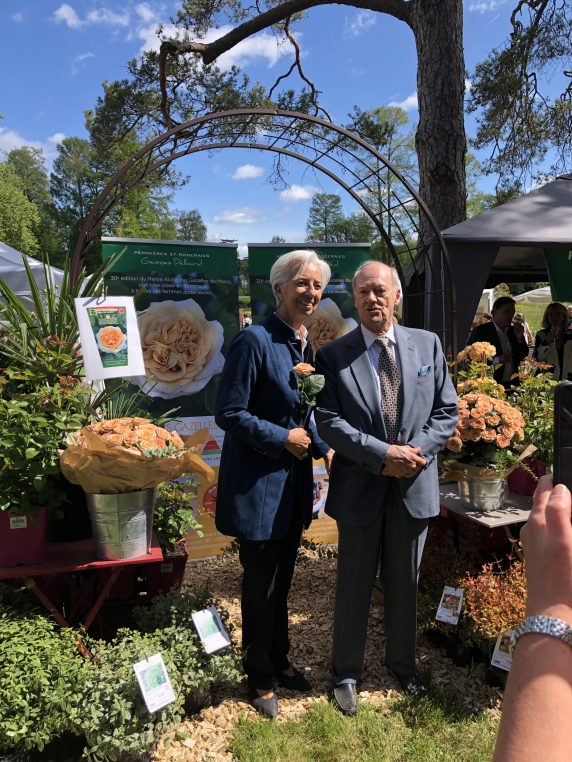 There were multiple activities in Chantilly, where less English and Belgian exhibitors were present, but the public was already queuing at 10 am on opening day to discover the new rhododendrons or the new rose created by Delbard for the Gazelles du Désert’ moto race in Morocco which involves only women. Christine Lagarde, ECB’s president, was the godmother to the event and gracefully appeared with Eric Woerth, the MP for Chantilly and a close ally of President Macron. 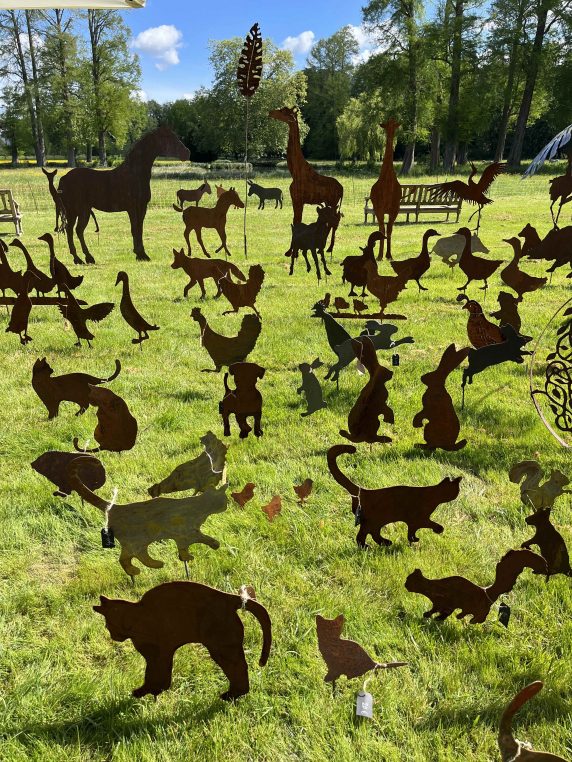 These iron animals were forged by Thomas Duchesne for La Girouette

One new booth enchanted me: La Girouette, run by the artist Thomas Duchesne, who makes animals in iron in Salviac in the Lot. A hundred of them were displayed in the field overlooking the park with the grand canal in the back and chicken, cats, horses and giraffes were parading along geese, dogs, rabbits and ducks. There was a bench and I sat there for a few minutes, enjoying the bucolic beauty of the site. 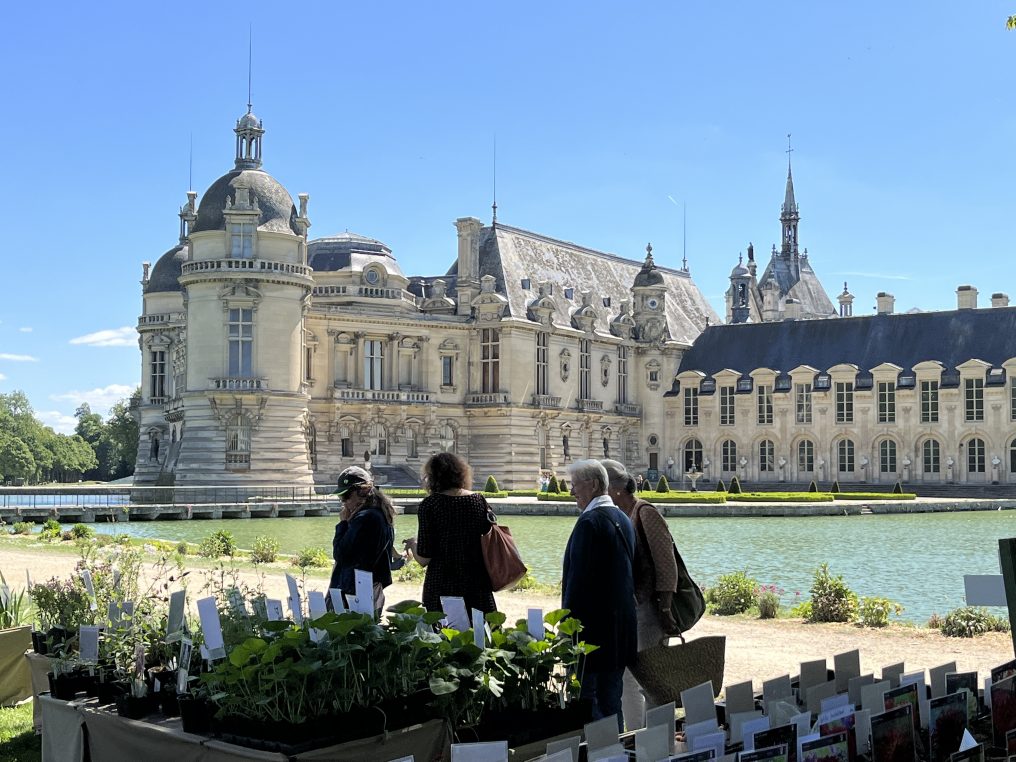 The castle is a perfect background for the Journées des Plantes

I also loved chatting with the students of Lycée Horticole de Ribécourt near Noyon, who were watering their multiple plants. Pierre de Crépy, the former administrator of Chantilly was attending a booth Jardin et Santé (garden and health), an association, run by Virginie le Tarnec,  which focuses on creating gardens in hospitals for therapeutic purposes. There are already 76 in France where long term patients can potter around and enjoy the soothing experience of growing flowers or vegetable. Also the booth of Farrow and Ball, the well known paint specialist, who is decorating the Dürer exhibition gave a good range of colors. 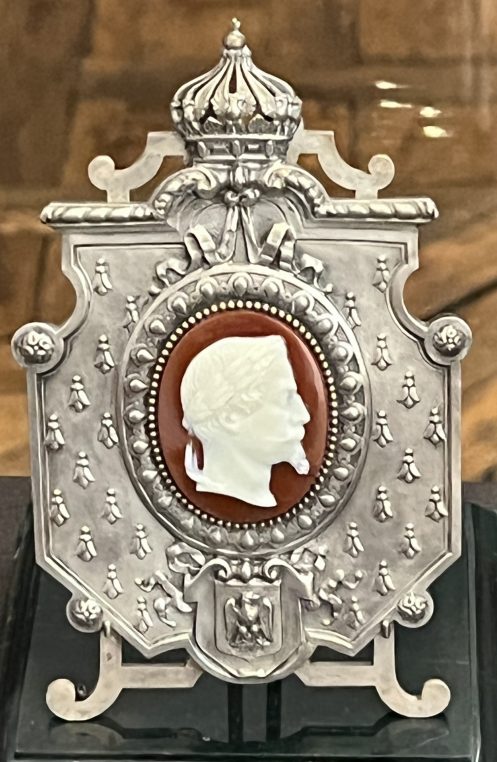 Paul Victor Lebas, Cameo with the profile of Napoleon III in a silver frame with imperial arms, Maison Froment Meurice

In the meantime, at Palais Impérial de Compiègne, a small but fascinating exhibition was opening and I was lucky to be toured around by Etienne Guibert, curator in charge of the apartments. A series of 148 drawings and watercolors of fabrics and wallpaper models were bought and they represent well the evolution of taste from Louis XV to Napoleon III. An ink on paper of George Sand by Prospère Mérimée “Socialist-Phalanstairienne-Communiste” was bought from galerie Chaptal in Paris. It will be part of the future Mérimée exhibition planned in Compiègne for the end of 2023. An album made in 1886, of painted photographs of Comtesse de Castiglione, the beautiful Italian spy who was Napoléon III and Duc d’Aumale’s mistress, was also acquired from a private collector. Two cameos by Paul-Victor Lebas for Froment-Meurice of the Emperor and Empress Eugénie were also bought in 2021. The furniture of Napoléon III’s cabin on his yacht Aigle in light colored wood, from Maison Pillivuyt in 1859, is very inspired by earlier Charles X style. 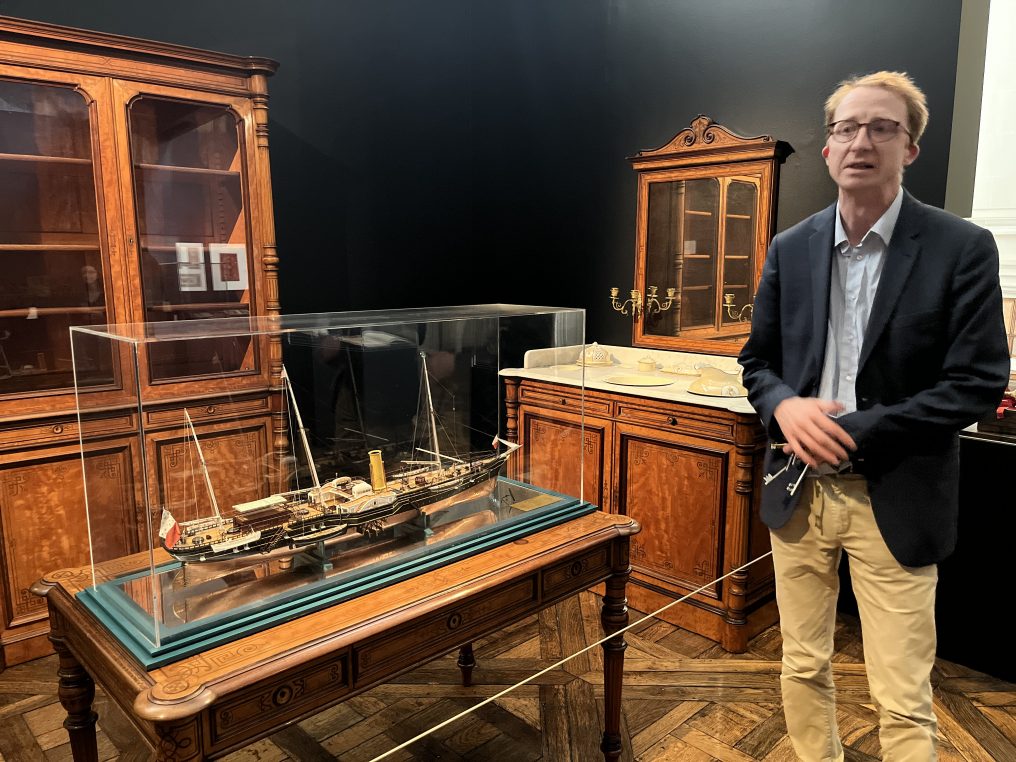 The curator with the keys, Etienne Guibert, in front of the furniture and model of Napoleon III’s yacht Aigle

But the core discovery is a couple of models of carriages designed ca 1760 which show a new device of suspension with guts ropes as described in a famous treaty for cars by Garsault. The models are exquisite and they were bought at the same time as Joséphine’s sleigh previously shown last winter. Two chairs, one belonging to Louis XVth in his private apartments of Compiègne and another one from Napoléon’s bathroom, are shown here. A portrait by Carolus-Duran and a watercolor by Eugène Lami of a play performed for Impératrice Eugénie in 1866 complete this series of acquisitions… 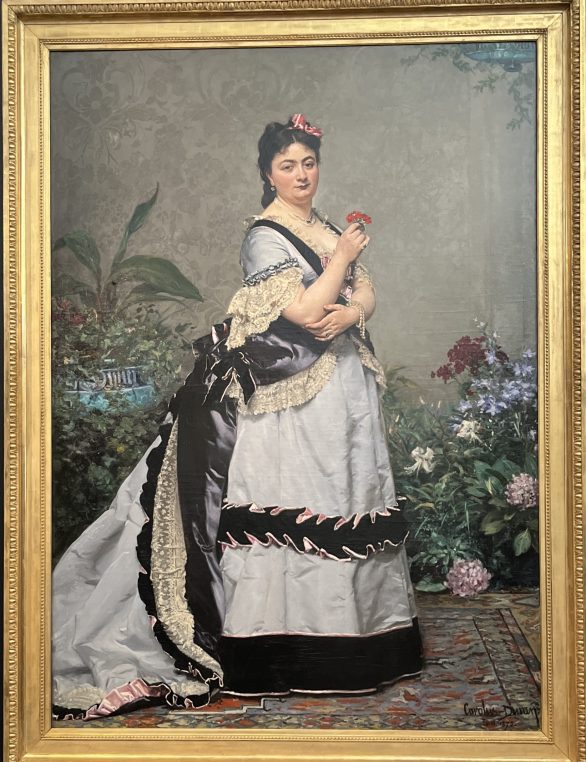 Carolus-Duran, Madame Maurice Richard, 1870, (wife of Minister of Beaux Arts in 1870), bequeathed by her heirs

On the way out, and  after visiting the Empress’ apartments which were recently open, I discovered a display of Sèvres vases ordered after Champollion’s discoveries in Egypt. They are fabulous and show how rich the reserves of the Museum are. The fact that Compiègne was a hunting lodge for numerous kings and emperors over the centuries gives it a very long historical collection.

It is little known and a great reason for an outing. The train ride is 52 mn from Gare du Nord. Check the schedules for  tours and for the visit of the Empress’s apartments. 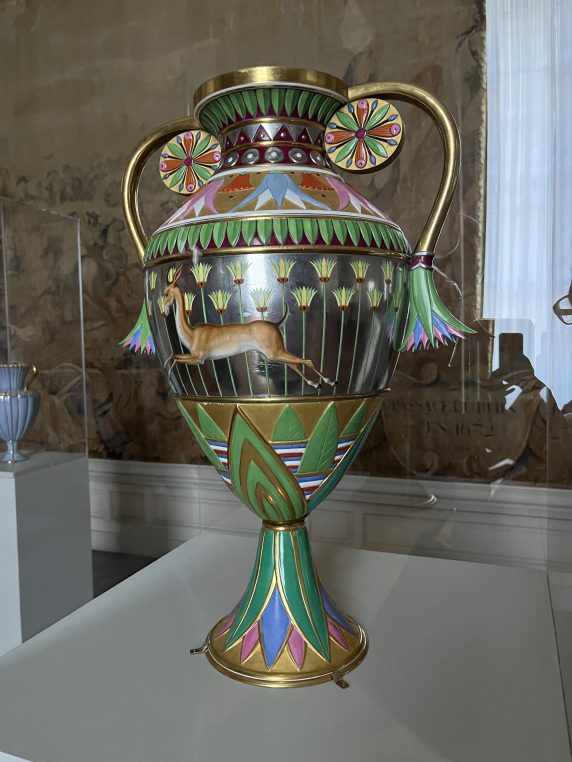 4 Comments on “Chantilly and Compiègne, two reasons to drive north”