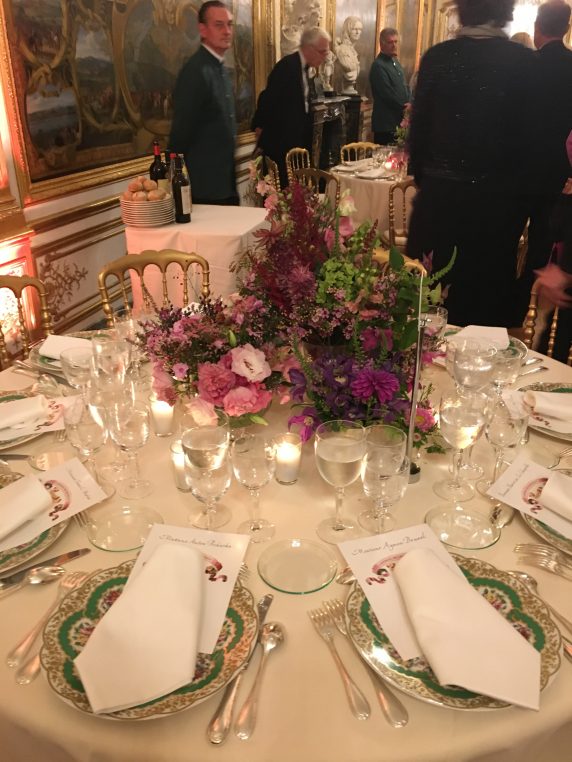 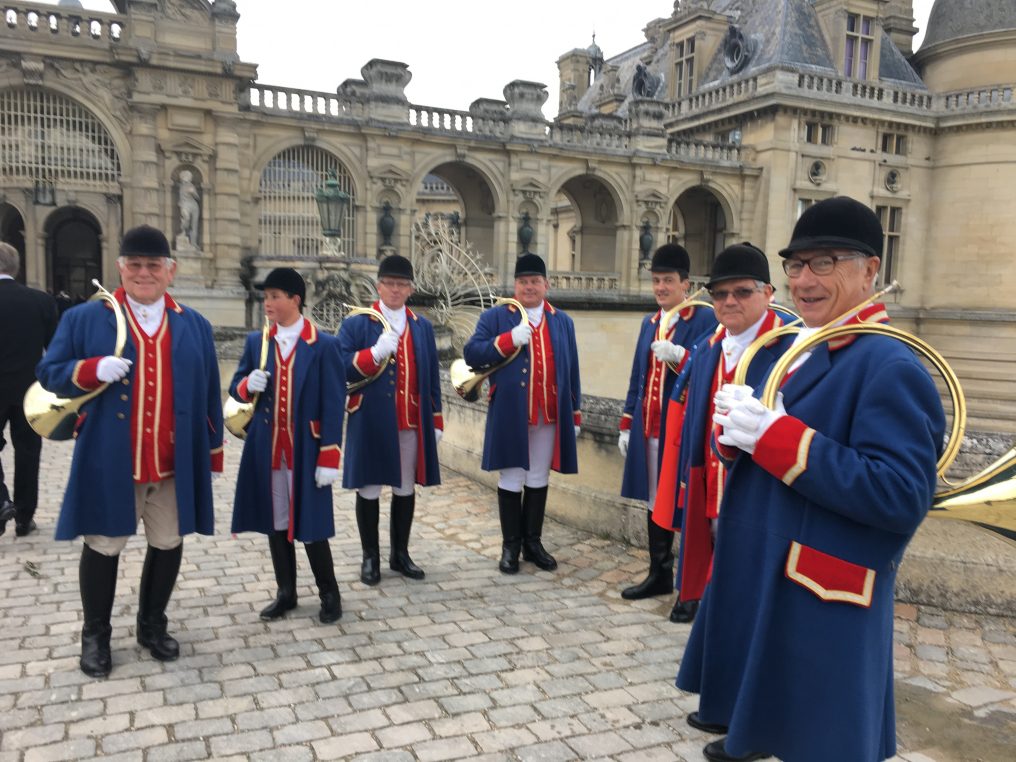 It was a very International affair but also a privileged family moment which took place at Château de Chantilly on Prince Amyn Aga Khan’s 80 th birthday and all guests were mesmerized by the beauty of the castle which houses the largest collection of paintings in France besides the Louvre. 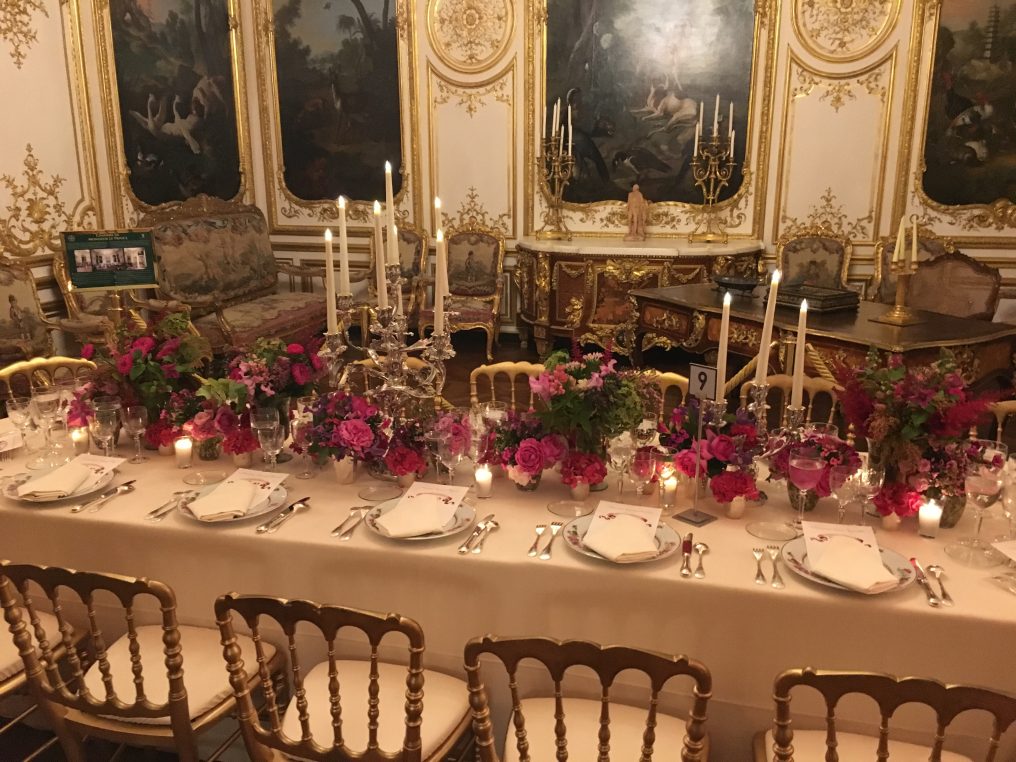 The gala dinner hosted by Maryvonne Pinault counted as many dukes and princes as art lovers. Owned by the Princes de Condé, cousin of Louis XIV th and later in the 19 th century, by Duc d’Aumale (who gave his fabulous collections of books, paintings and furniture to the French Institut), Chantilly is one of the few castles in France with such an aura. The evening was organized by Friends of the Domaine de Chantilly to benefit the restoration of Duc d’Aumale’s private apartments. 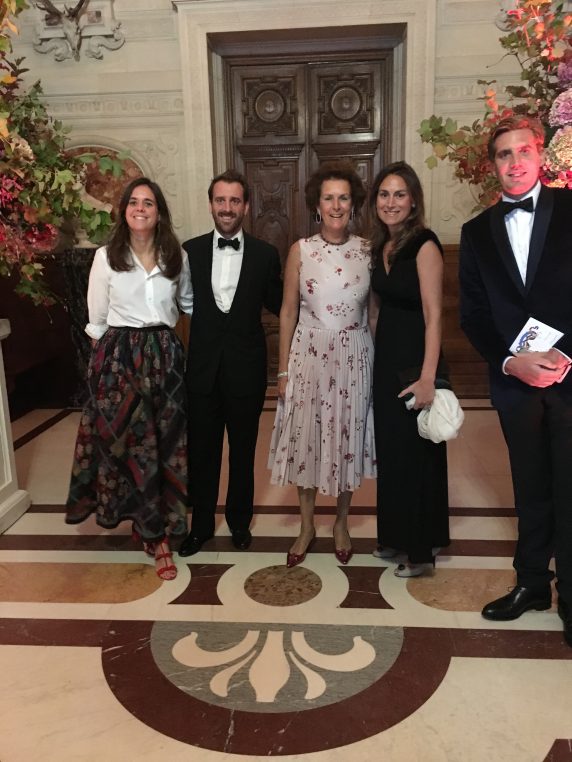 The cherry on the cake was William Christie playing the harpsichord at the concert with  beautiful 24 year old mezzo-soprano Lea Desandre who enchanted the 230 guests with Handel and Charpentier arias. Les Arts Florissants performed in the Galerie des peintures where everyone sat under a chef d’œuvre by Poussin or Raphaël. 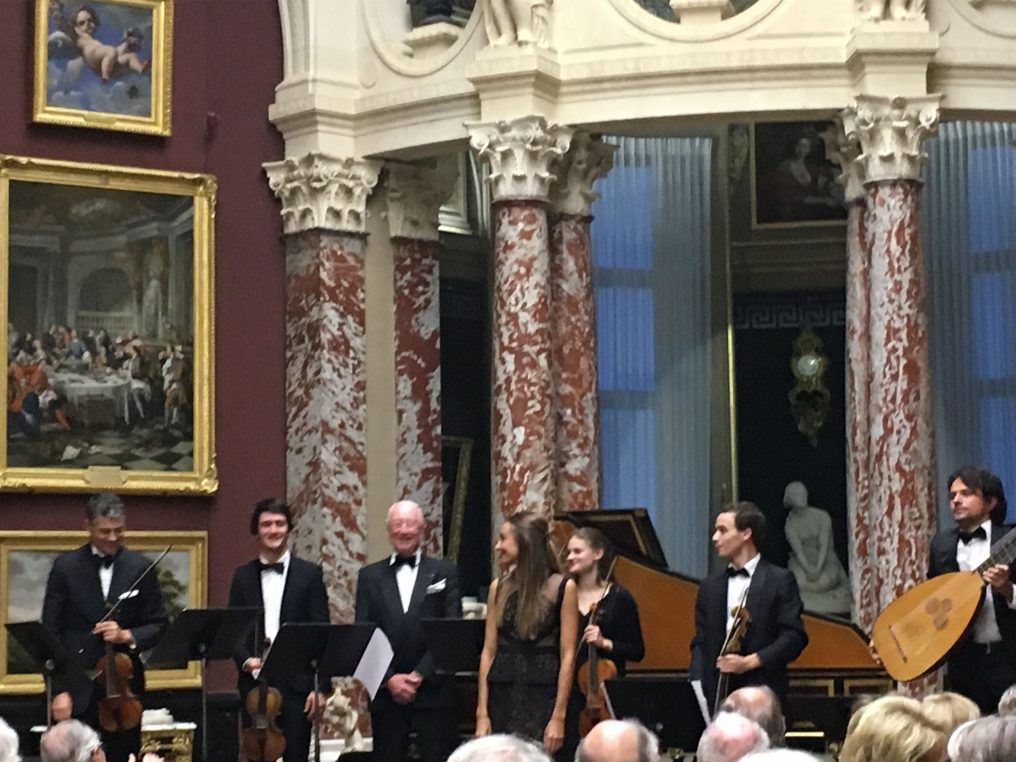 What made the evening so special was that there was a true family atmosphere among the guests. With His Highness the Aga Khan, President of the Fondation de Chantilly, celebrating his younger brother Amyn, and showing his new happiness to all, a very thin Maryvonne Pinault with her husband and art lover François Pinault, interior decorator Caroline Sarkozy with her brother François, the Brunel, Boisgelin, Chardon families, the Duc de Poix, Prince and Duc de Broglie… everyone had a friend and Peter Marino, Lynn Wyatt looking younger than ever,  Christopher (Kip) Forbes,  Pietro Cicognani and Kathrine Bryan seemed happy to mix with the cream of French aristocracy. 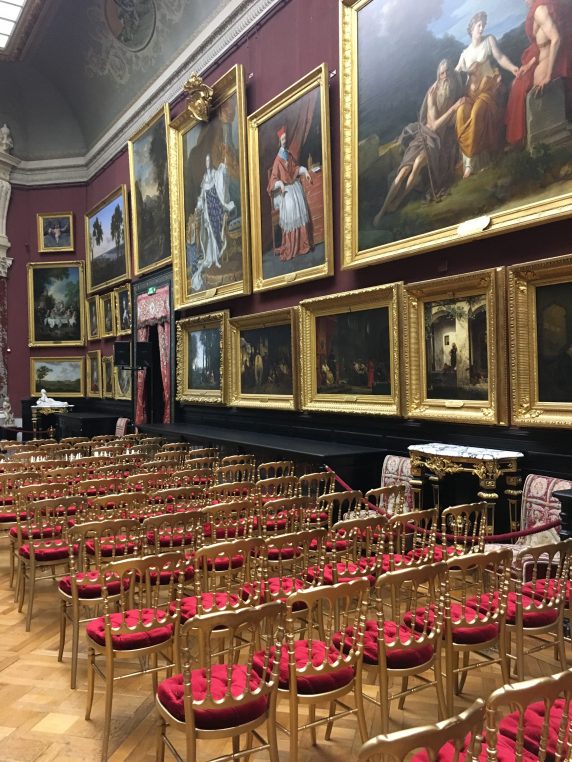 The Grande Galerie prepared for William Christie’s concert with its Corot, Largilière, Gros and Fromentin paintings

There was also a younger crowd led by Frédéric Jousset and Serena Cattaneo Adorno, (who runs the Gagosian gallery in Paris) announced her imminent wedding to Thomas Repelski.  After the concert which moved everyone, Laurent Perrier champagne was served while guests tried to find their table in the Grands Appartements lined with gold and white wood panelings. There were so many interesting friends that it was hard to speak to everyone, but the general atmosphere was very happy and generosity was on every face. 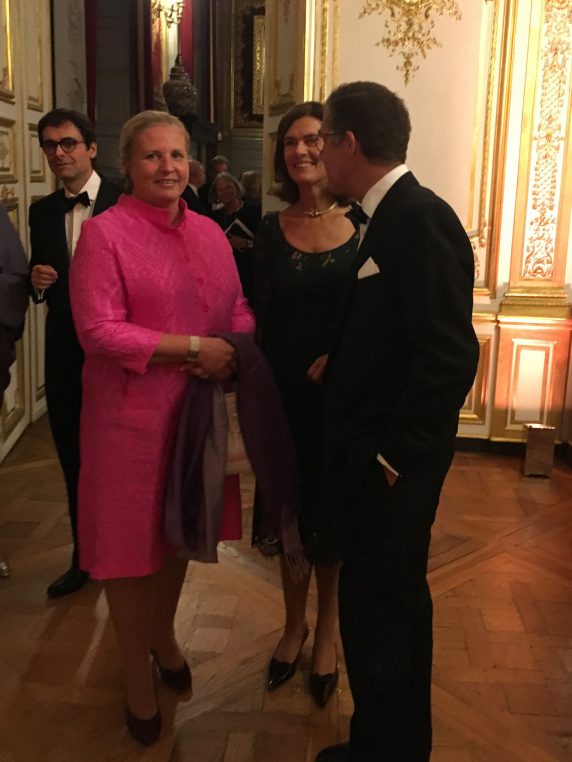 The exceptional furniture including the mineral cabinet offered by the King of Sweden to Prince de Condé, the Oudry paintings and Van Dyck portraits, Gobelins tapestries, Riesener commodes and Christophe Huet’s animal paintings and singeries rivaled with the elegance of the guests… 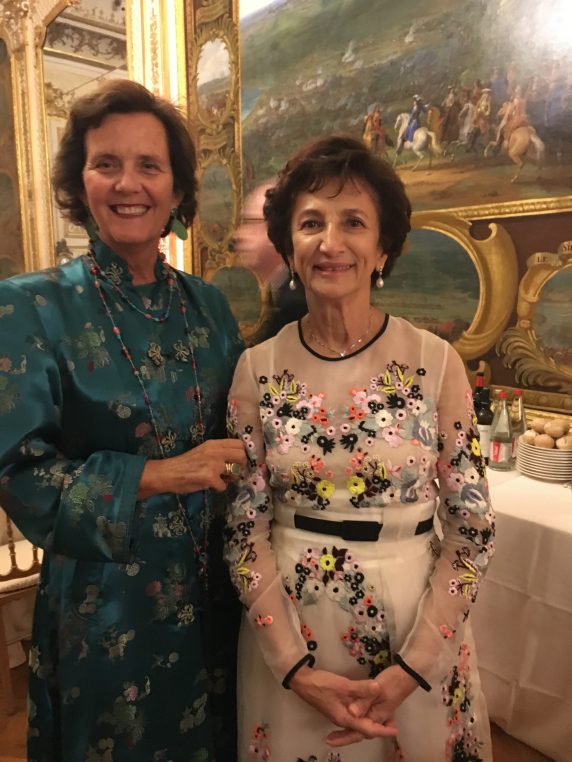 We went through the salle des gardes, the apartments of Monsieur le Prince (where Prince Amyn was sitting), the Grande Singerie or monkey room and the Galerie des Actions where all the battles won by Condé are painted. This is where I sat next to the Aga Khan’s table where I could admire his beautiful new lady, who is a Kabil  from Algeria. 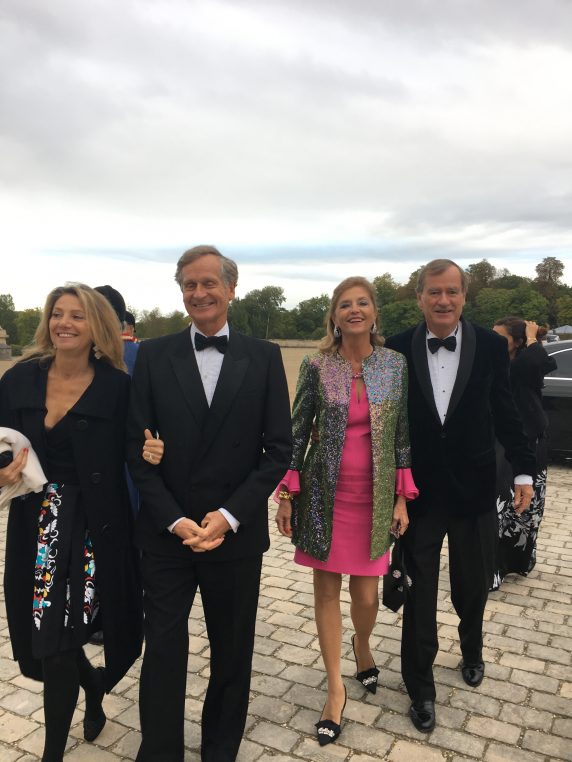 There were many successful businessmen who seemed to forget about their money for a few hours and watched everything, bewildered by the beauty of 18 th century life. The famous duc d’Aumale’s library which houses “Les Riches heures du Duc de Berry” fascinated many of them. However rich or successful the guests were, they understood that history and art were more important that evening. 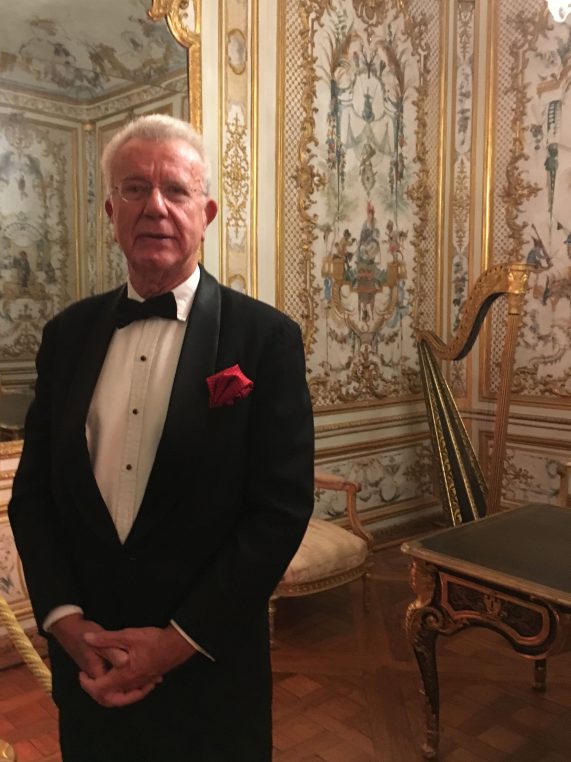 The tables were fantastically decorated with flowers by Eric Chauvin 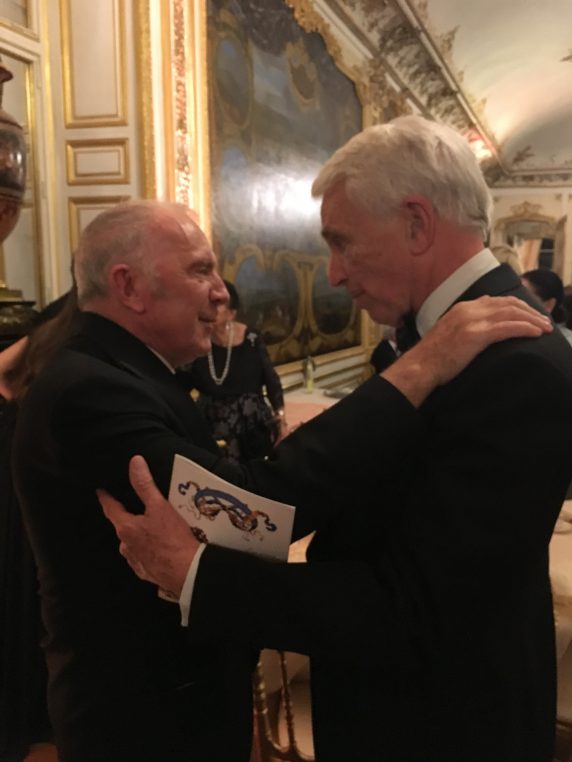 , pink and green china, couvert à la française and engraved glasses provided by Option. Dinner prepared by Lenôtre was out of this world, with a starter of caviar on avocado vichyssoise, Bresse chicken with truffles and ceps, and a pink bombe glacée.

A myriad of waiters dressed in green were attentive to serving delicious Saint Emilion Château Branda in magnums and white Villa Baulieu from Aix en Provence, and there was not a moment of waiting. Fabienne de Sèze who had supervised the organisation of the evening with Candelita Brunel can be proud of herself. 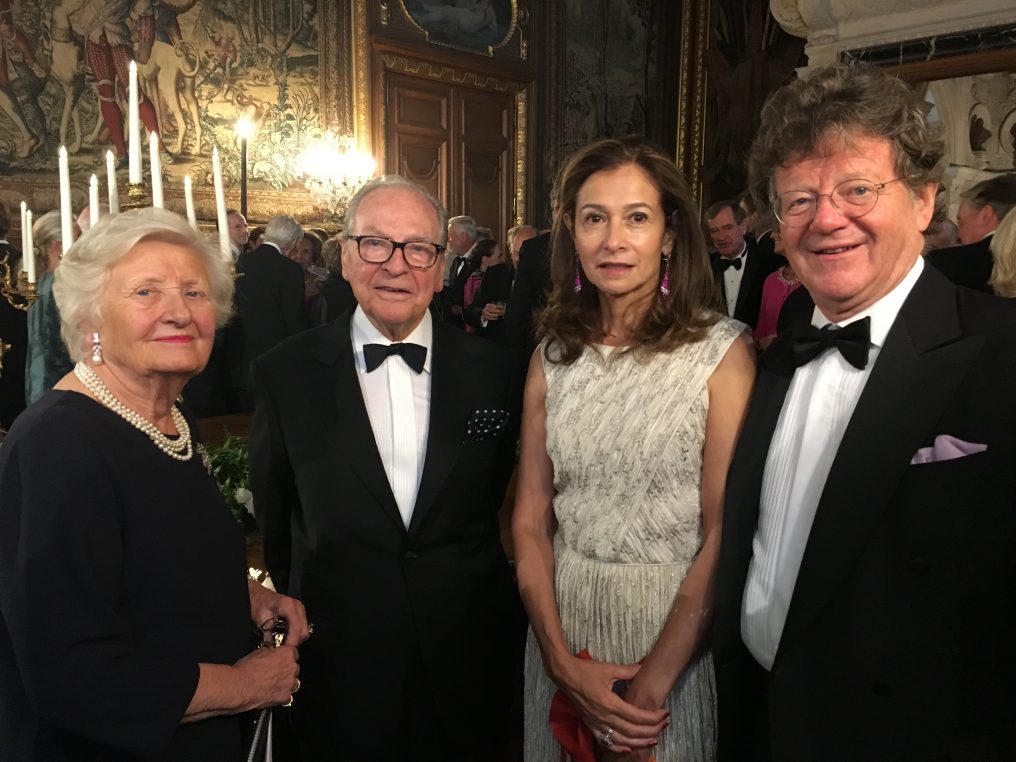 After coffee everyone walked out on the terrace facing the Le Notre gardens to watch the fireworks which reflected in the water. Henri Loyrette former president of the Louvre and his wife Domitille were as excited as everyone and left on the coach for Paris with most guests, just after Prince Amyn had blown his candles. Everyone was relieved that the general strike announced weeks earlier had not even been noticeable. 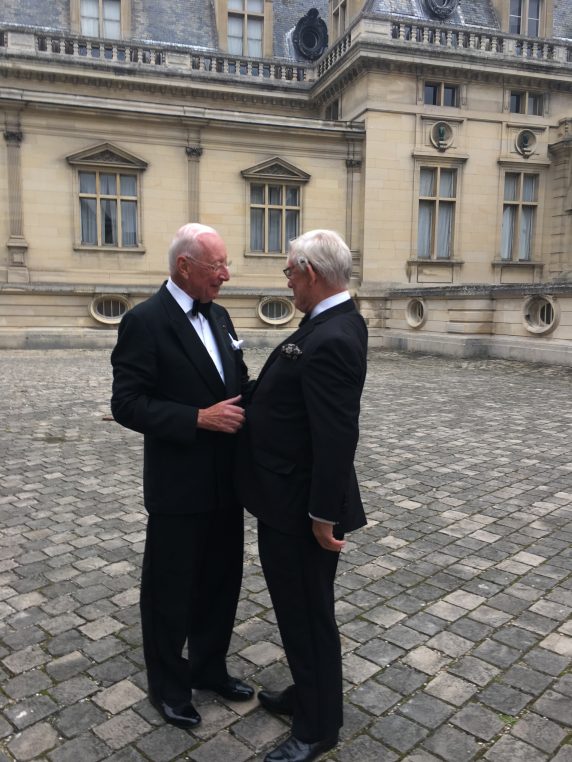 The evening was as close as one can get to the court of Versailles… in 2017. And everyone had fun…

My only regret is that we could not access the Poussin exhibition curated by Pierre Rosenberg and  Nicole Garnier, head curator at Chantilly, which had just started around the « Massacre des Innocents ». But I will go back to see it very soon… 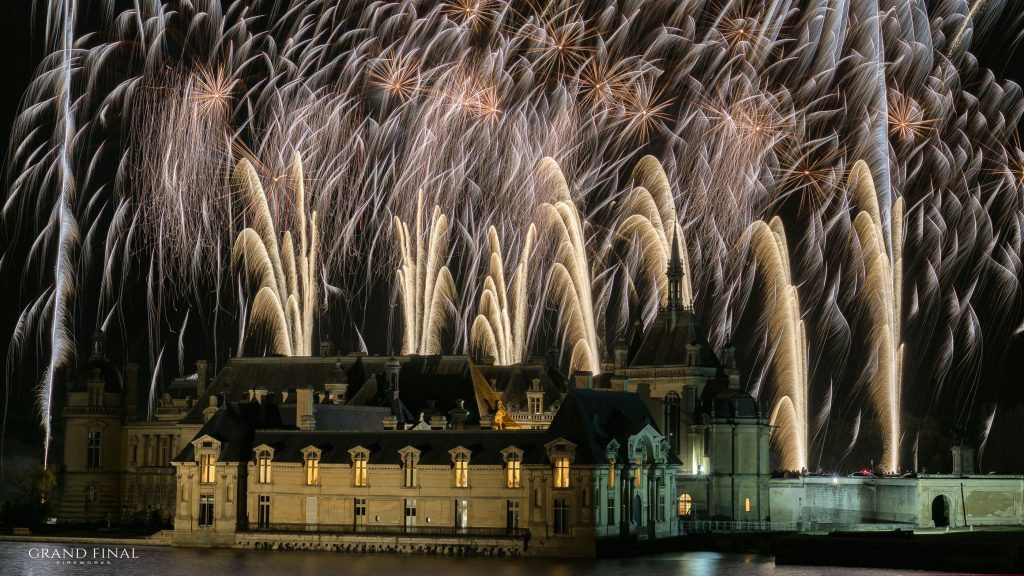 The fireworks over Château de Chantilly were created by Grand Final

Château de Chantilly is one hour from Paris by car and twenty minutes by train from gare du Nord. On October 13-15, Les Journées des Plantes are taking place in the park. A good occasion to see the Poussins as well…

If you want to be invited next year, you can join Friends of the Domaine de Chantilly!

7 Comments on “Chantilly at its grandest”