Musée Cernuschi, the Asian art museum in the Parc Monceau, is one of the rare peaceful places at the moment in Paris and the new exhibition of Japanese prints “From Edo to Kyoto, on the Kisokaido road” is exceptional artistically and a great psychological boost.  Four major artists Utagawa Hiroshige, Keisai Eisen, Utagawa Kunisada and Utagawa Kuniyoshi worked between 1820 and 1860, creating prints of th travels between Edo (Tokyo today) and Kyoto. The different routes used with many stopovers became a mythical art work, designed like a comic strips. The wood prints are so varied and colorful that it is a festival to the eye.

After the fifty three stops of Tokaido road which was presented in the same museum in 1980 and at Musée Guimet last year, we get the more elaborate 540 km long mountain road of Kisokaido with its sixty nine stops. Eisen and Hiroshige are the two maestros of landscapes, of life under the rain or in the snow, in what is considered as the most famous views of Japan. Kuniyoshi stages real Kabuki actors, the real stars of Edo period theater, or sumo fighters in very vivid images, Kunisada, who is sadly only shown in photographs because his work is at the MFA in Boston and could not travel, is represented by very colorful images of famous actors in each city. 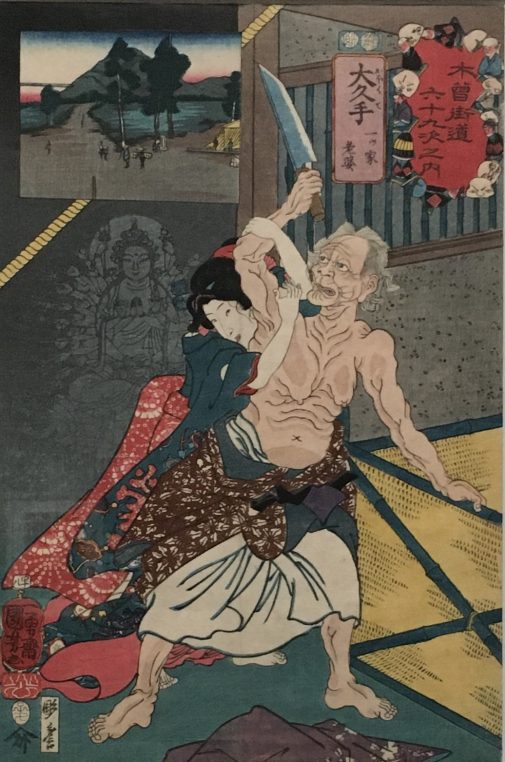 Five different roads were created in the early 17 th century to connect Edo and Kyoto, the town of the shogun to the town of the Emperor. One went along the sea shore, the Tokaido road, through Kobe and Osaka and many ferries or river crossings; the other, the Kisokaido went over nine mountain passes, with many arduous paths. They were mostly commercial routes with stopovers every 30 to 40 kms. Inns were built along the way, stone lamps were added at the entrance of the villages and large wooden signs were posted. There were servants-prostitutes provided  in the “meshimori-hatago”, other inns were reserved for notable travelers wearing a kimono. Travel documents were required and there were many check points. Maps and guide books were printed. Bamboo traveling chairs were carried by two men, others went on horseback or walked.

Keisai Eisen, the stopovers of Kisoji road, stop n°41. Nojiri : view of the bridge on river Inagawa, 1835-1838 © Fundacja Jerzego Leskowicza
In 1861, poetess and calligraphist Princess Kazu, half sister of Emperor Komei, married  the 14 th Shogun Tokugawa Iemochi in Edo. She is escorted by her mother and  a suite of 30 000 people in a 50 km long procession and the trip takes a month instead of 15 days. That these artists should undertake this tiring voyage and report on it with these amazing prints is itself a miracle. We know for sure that Hiroshige achieved the trip when he took over from Eisen. He is probably my favorite of the four, with his amazing rendering of the torrential rain in Nakatsugawa and Suhara.

The process of printing on wood (xylography) is well explained in video in the exhibition and the quality of the ink work is also underlined. What is most amazing is the perfect color which the works have maintained over the years. After Hokusai, the most famous of Japanese printers, this group of four is an excellent surprise.

If one day you decide to climb this road through the mountains, you will find delightful Japanese hot baths on the way in the ryokans or minshukus.  The exhibition at Musée Cernuschi is until January 17. Since it is closed at the moment for confinement, you can always order the catalog or the special edition of Beaux Arts magazine.

2 Comments on “Charm and poetry at Musée Cernuschi”