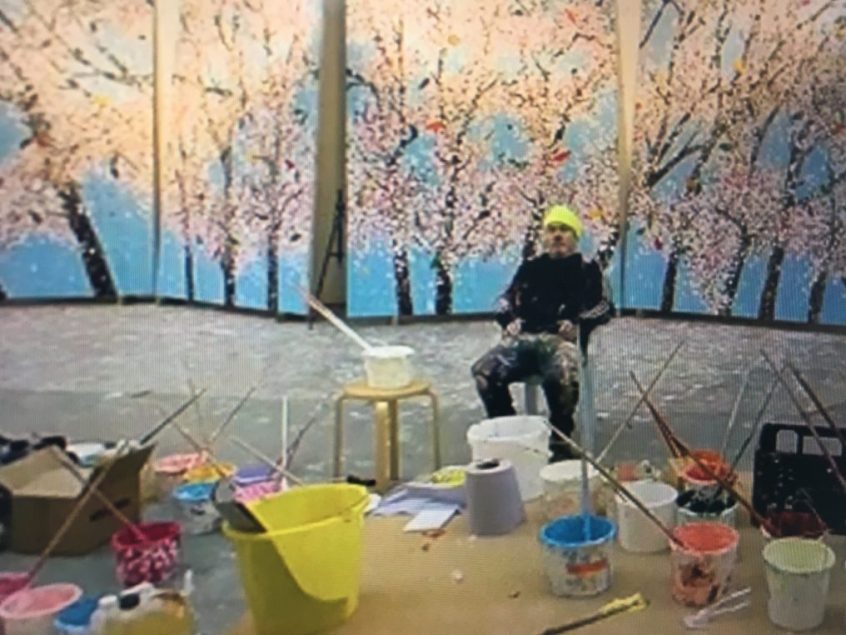 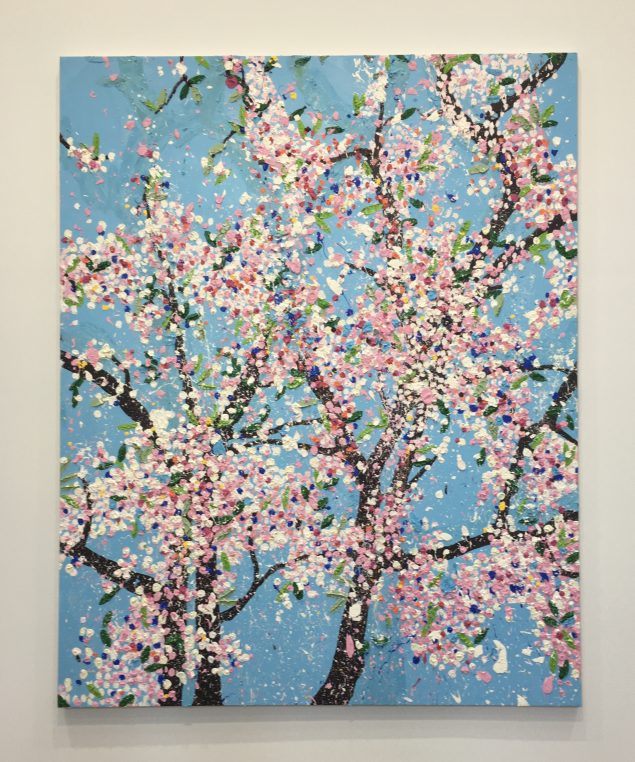 Damien Hirst has accustomed his public to surprises over the years ever since Charles Saatchi discovered his work at Freeze which he organized in a disused Port of London warehouse with sixteen of his classmates from Goldsmiths College of Art in 1988. He was 23 and had lived in Leeds until then. The exhibition “Cherry Blossoms” at Fondation Cartier takes after some of Van Gogh’s paintings which he discovered in 1984 during a tour of European museums, but also reminded me of David Hockney’s “My Normandy”. This show of 33 paintings (from a series of.  107) is very luminous, far from his glass vitrines with sharks or filled with “shipwrecks”. The works remain abstract and the thick oil painting gives it a specific depth.

Downstairs 14 large pink canvases make you float in a dream

“I wanted them to be big so you could kind of fall into them” says Damien Hirst, “I just want it to be in our face. I want you to feel like you’re too close to it, you know.” He was influenced by both Jackson Pollock and Francis Bacon and used some of their energy. “It’s a throw, it’s not a pour” he says about his painting style. Lockdown’s been really good for me work-wise, just because I managed to keep painting and I managed to get lost in it.” 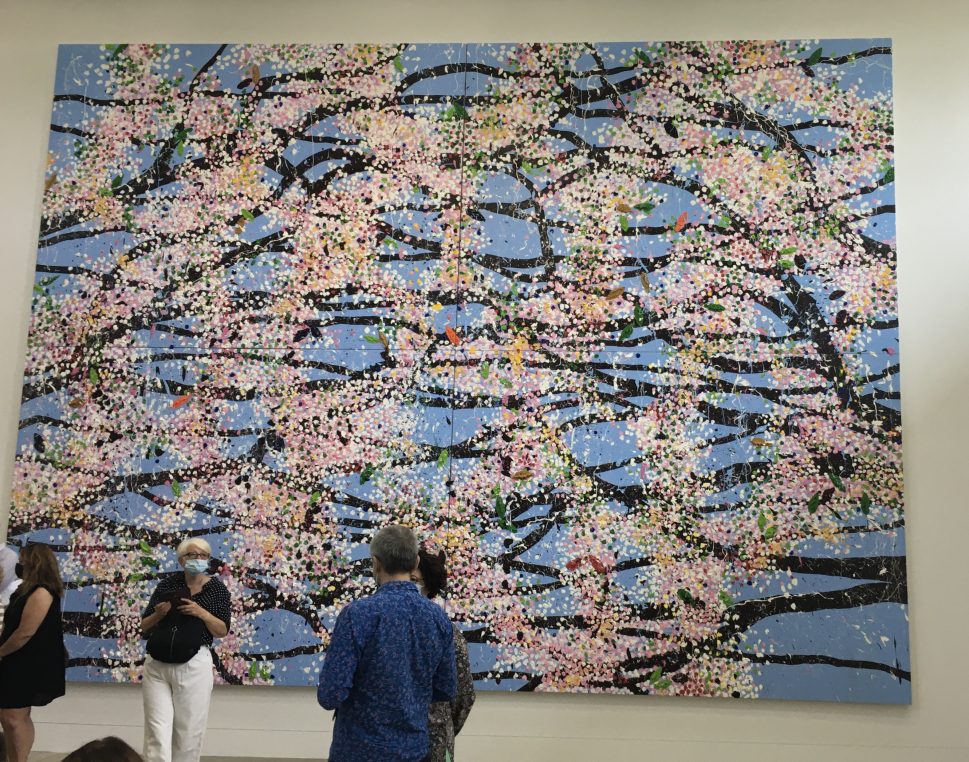 Damien Hirst first showed in Paris at Emmanuel Perrotin in 1991. But this is his first institutional show in a museum and most of these canvases will soon be dispersed and go back to their collectors. So it’s very lucky to be able to see them together.”The Cherry Blossoms are about desire… but also about the insane visual transience of beauty – a tree in full crazy blossom against a clear sky” says the artist. 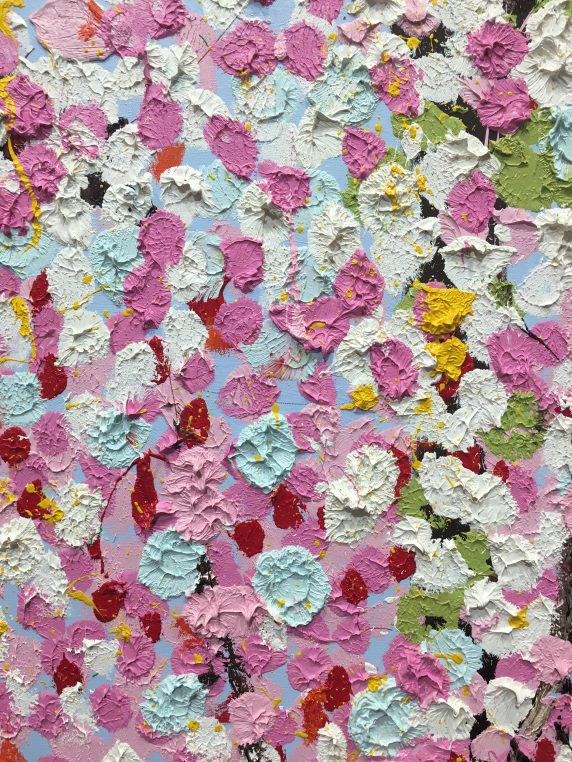 Detail of a canvas. The thick oil paint is not always dry yet.

In his text published in the catalog, Philippe Costamagna, director of the Palais Fesch in Ajaccio, describes the poetry of the artist’s studio in winter light. After quoting Leonardo da Vinci on art and poetry, he quotes Hirst talking about literature and art on the same level. Poetry in painting starts with the imitation of nature. And he mentions the poetic gesture of painting cherry blossoms which last so little time. “It is the most poetic illustration of the passing of time “. Hokusai, Hiroshige, Van Gogh and now Damien Hirst were all attracted to these trees. In the room downstairs I stood for a while surrounded by the fourteen pink paintings and it reminded me of Monet’s water lilies oval room at the Orangerie. There is  true romanticism coming out of this repetitious floral theme. 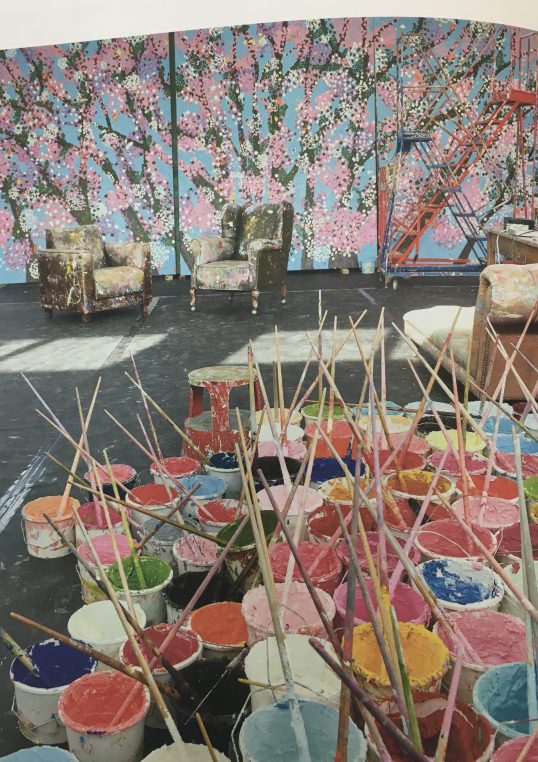 Make sure to book ahead and get proof of your vaccine and an ID, otherwise you will not be let in the Fondation Cartier which is very cool at the moment with its pretty garden (Until January 2, 2022). A 4 mn film on the website  gives a further idea of the artist’s work over the last three years in his airport like studio.