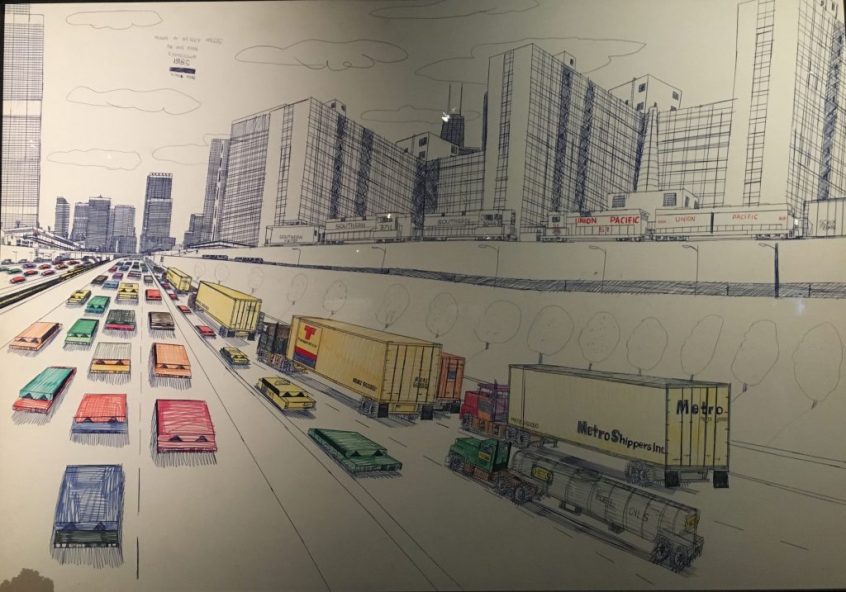 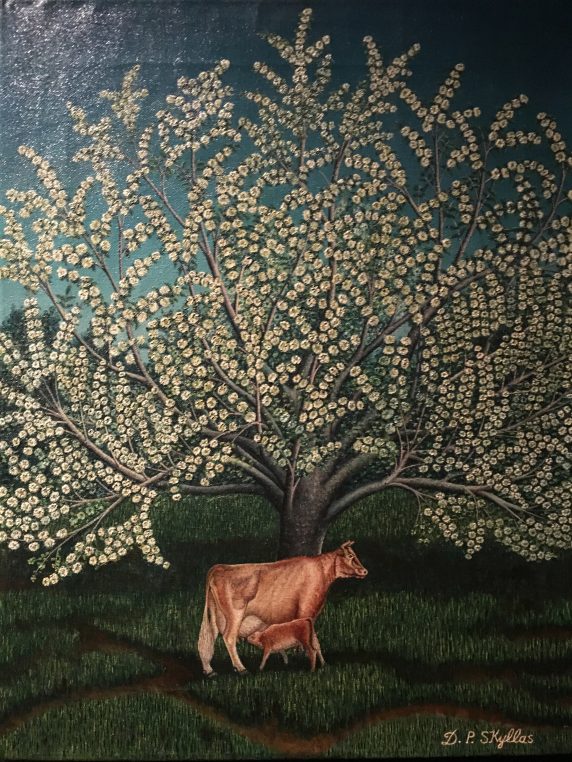 Drossos Skyllas, Untitled (Tree of life with cow and calf), 1950, Intuit, the center for Intuitive and outsider art

La Halle Saint Pierre is a very special museum of Art brut in Montmartre. Twice a year it invites visitors to discover a new territory and this time, we travel to Chicago, where director Martine Lusardy has discovered amazing artists. This is where Dubuffet, the apostle of art brut, was first exhibited in the US when he travelled there in 1951. He gave a speech on “Anticultural positions” and local collectors started to buy “outsider art”. This exhibition of ten artists was organized by  Intuit (Center for intuitive and outsider art) under the name “Chicago calling: art agains the flow”. One of which, the late Henry Darger, is particularly fascinating. 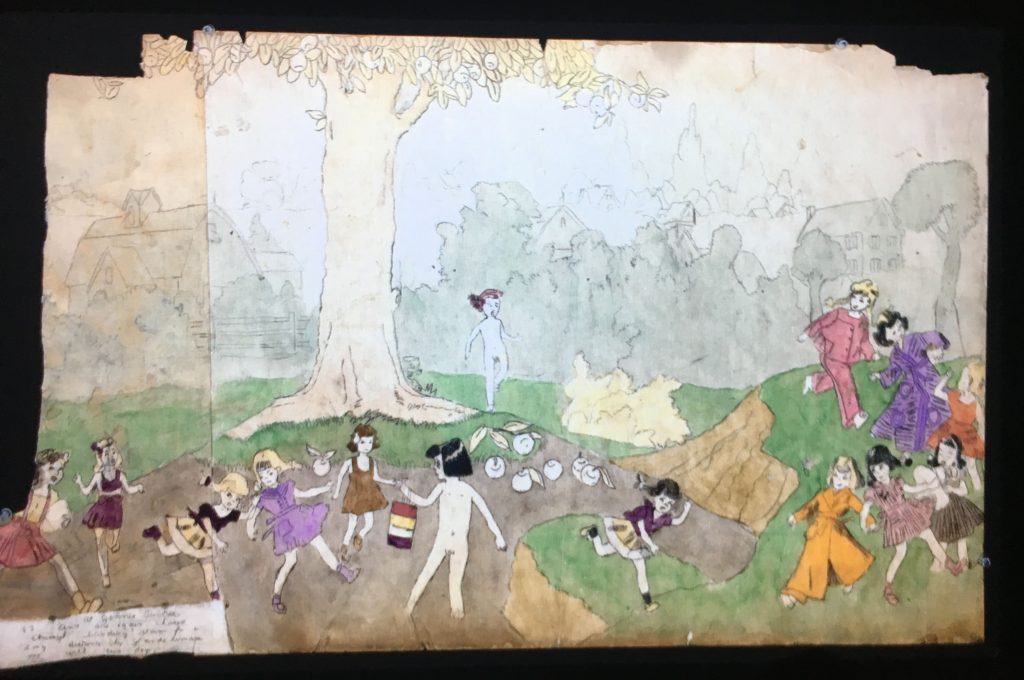 Born in Chicago in 1892, Henry Darger, looses his mother at 4 and is sent to a violent home for children at 7, then interned in a mentally handicapped asylum until he escapes at 17 after he learns of his father’s death. His lifetime employment will be to clean in hospitals. After his death in 1973, his lodger discovers a 2 000 page autobiography, a bunch of 15 000 typed pages called “The Realms of the Unreal” and illustrated with hundreds of watercolors. Little girls with men’s sexes play around and are reminiscent of children’s color books. His life was tragic and his art is very disturbing under a false charming aspect. 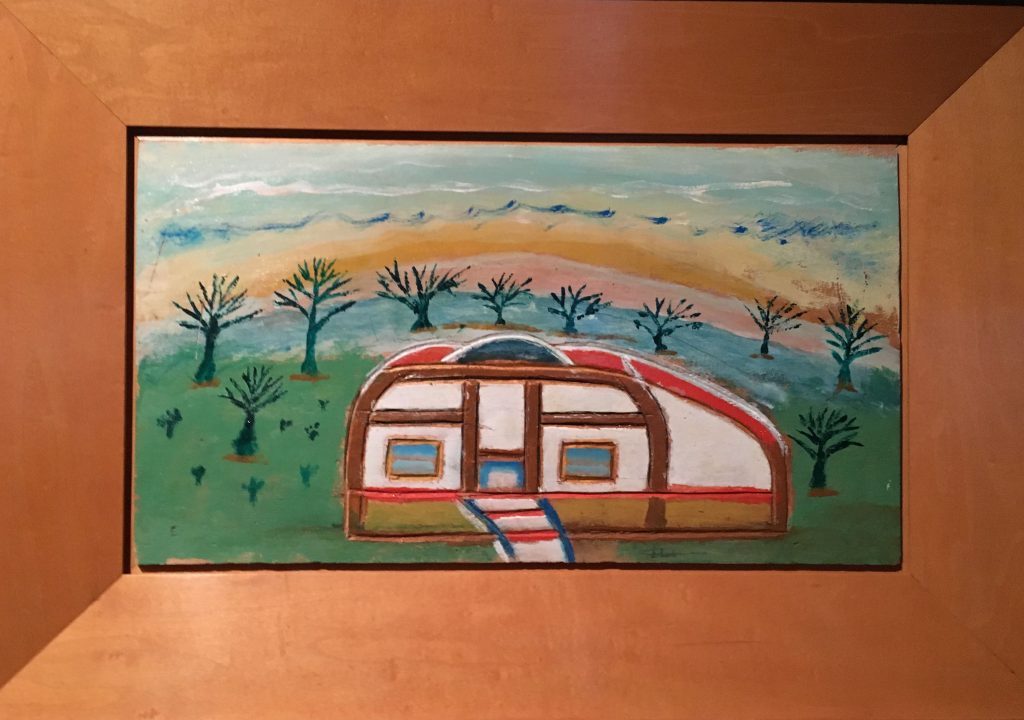 William Dawson who was born on a farm in Alabama, is the grandson of a slave. He only becomes an artist after retiring from a wholesale distribution company. He is the first Black member of a union in Chicago. He has made over 500 sculptures and 150 paintings of buildings and animals, particularly horses. His naïve art is very attractive. 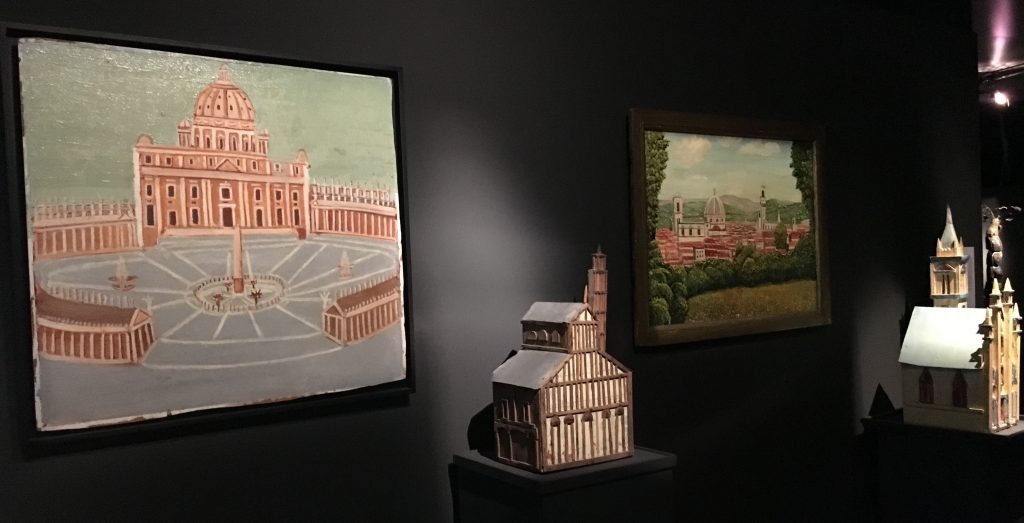 These artists bring a joy and a healthy irreverence to the world of art and Halle Saint Pierre is a unique place in this sense. Walking through the dark first floor and the luminous second floor is a moment of great fun and discovery.

Aldobrando Piacenza and his Birdhouse cathedrals are another story. Born in Sant’Annapelago, between Lucca and Modena, in 1888, he arrives in Chicago and manages to earn enough money to go back and forth to Italy. In 1944 he buys a house with a garden in Highwood, in which he reproduces his village’s churches and houses. He also paints the walls of his house which becomes an attraction to painters and students from Chicago. 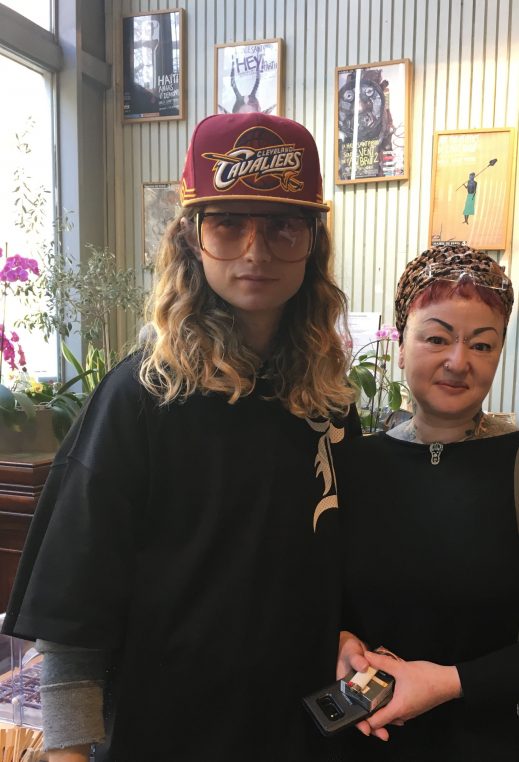 The Kid, an artist at gallery ALB, and Anne De Hey, organizer of the upstairs exhibition based on the magazine Hey!

Musician and artist Wesley Willis (1963-2003) is abandoned by his parents like his nine siblings. After being adopted, he becomes  a punk rock underground celebrity. His drawings made with a ball point describe the traffic, high-rises and street scenes of Chicago. Last year the Bic company had an exhibition at Le Cent quatre of ballpoint art and these drawings would have been perfect in the show. He developed in parallel a career as a street musician and kept developing his art until leukemia took his life. 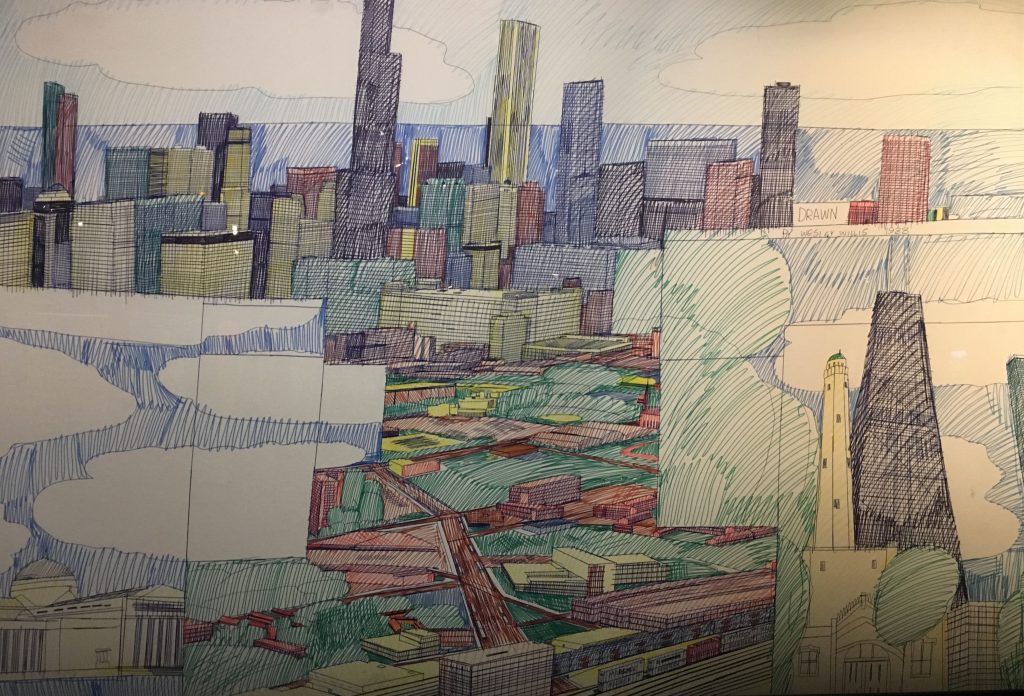 Another exhibition takes place in the same building on the second floor. The magazine “HEY! modern art & pop culture” publishes outsiders all year long. Here they have assembled 36 International artists from 17 countries which are very surprising. I liked Spanish artist Gerard Mas and his ladies in sculpture as well as American artist The Kid who featured a life-size man and lion called “Rise and rise again until lambs become lions”, 2016.

This show is well worth the trip to Montmartre. 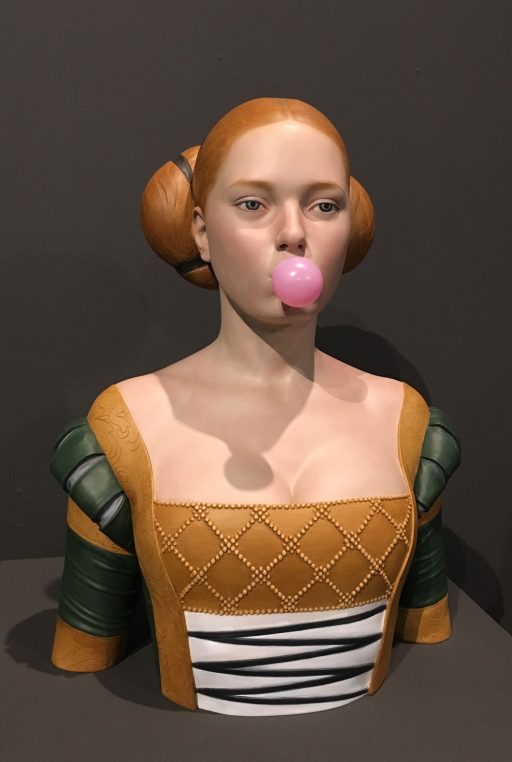 Halle Saint Pierre, 2 rue Ronsard at the bottom of Montmartre. Until August 2.

One Comment on “Chicago art brut finds its way to Montmartre”