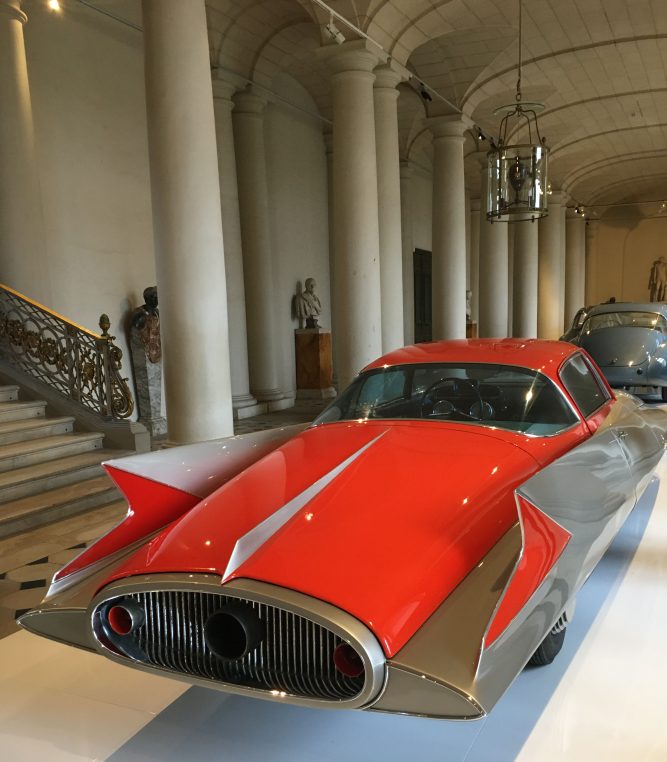 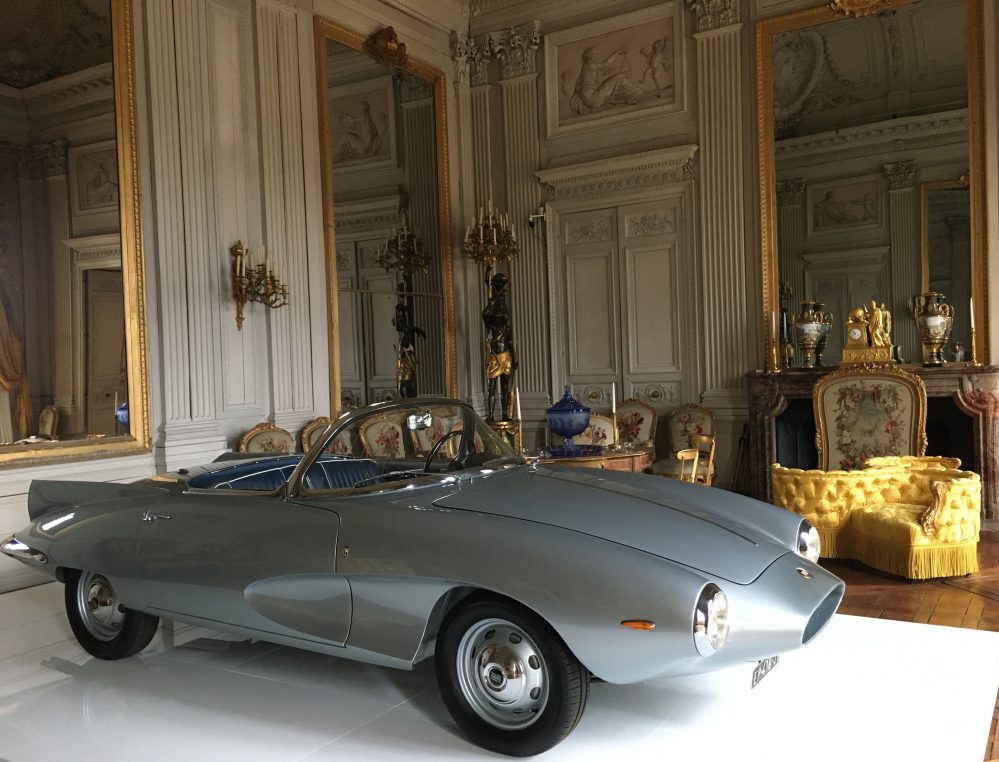 Château de Compiègne, where the young Marie Antoinette was welcomed by Louis XVth upon her arrival in France from Austria, on May 14, 1770,  has been recently revamped and its different drawing rooms and galleries are on top form especially since Rodolphe Rapetti, its Director, arrived two years ago. He loves cars and had the idea of this amazing exhibition of thirty “Concept-cars”, which were lifted up onto  the wooden floors of the XVIII th century castle built for Louis XVth. Whether you are an adept of car design or historical buildings, you can only be seduced by these contrasting beauties: one hour north of Paris, it is the most amusing show I have seen recently. And race car amateurs have flocking to Compiègne. 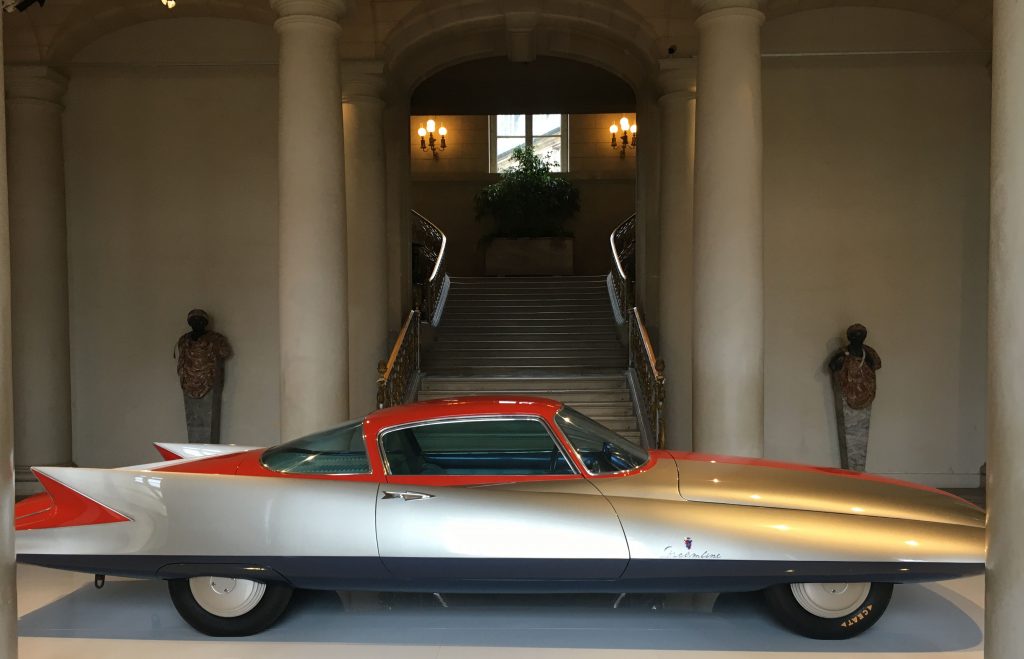 The visit starts in the long ground floor gallery where the Chrysler Ghia, at the bottom of the main staircase, is the most astounding design for a prototype. It takes its name from the 1946 film “Gilda” by Charles Vidor, interpreted by Rita Hayworth. Its designer, Giovanni Savonuzzi was an aerodynamic engineer. The car was never used on the road but led to the new designs of the 60’s and 70’s.

The Chrysler-Ghia from the back with its very special wings

The lower floor gallery is spectacular with a Bugatti T28 from 1921, a Panhard Dynavia from 1948, and a Socema-Grégoire from 1952, the first French car with a turbine which was made to run at 200km/hr. Its aerodynamism is so exceptional that it compares with today’s race cars. We followed a visitor who seemed incredibly knowledgeable and had probably been a pilot himself. He was enthusiastic about the turbines and the cylinders… 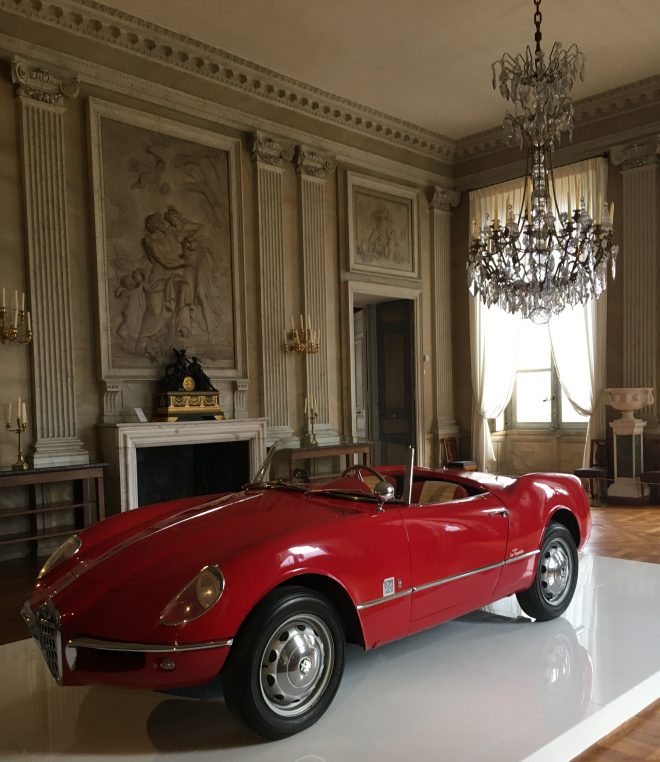 These cars are exceptional for their color and design as well as for their modernity. Upstairs, facing a portrait of Louis XVIth, sits “l’Oeuf” the egg, conceived in 1942 by Paul Arzens who was a locomotive, a subway station and a RER train designer. It could pass for a “Smart” of today. It was built in 1942, in aluminum and plexiglas, two materials that the German did not seize during the war. 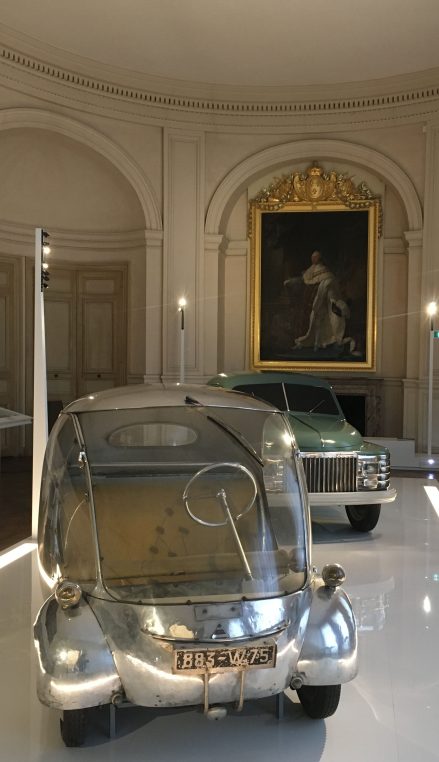 L’oeuf, 1942, by Paul Arzens, in the double antechamber of the Queen and the King. The portrait of Louis XVI th by Antoine Called

The new curator of the museum of cars in Compiègne, Richard Keller (formerly curator of the Mulhouse car museum), collaborated with Rodolphe Rapetti in this unusual exhibition and a few models have come from Mulhouse. The Museum of cars, a large space in which the collection of mostly horse drawn cars is shown, will be the object of a renovation in the near future. But for the time being the whole castle is devoted to the concept cars. 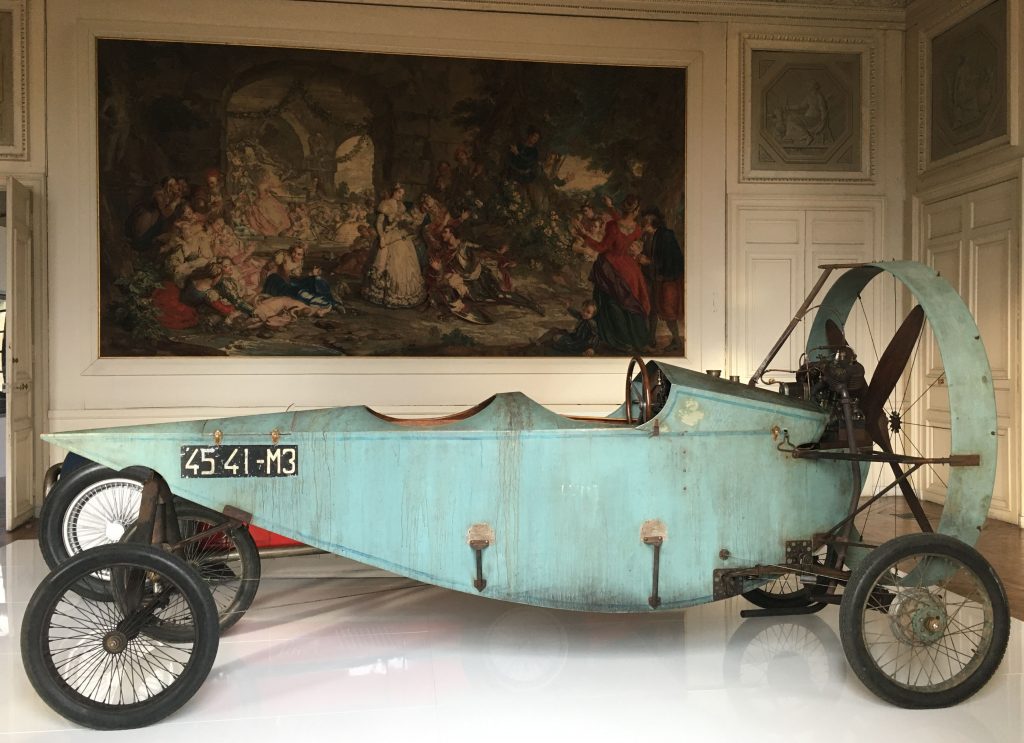 Leyat Hélica sport, by Marcel Leyat, 1921, private collection with a propeller inspired by airplanes in front of a (1790-1805) Gobelins tapestry by Coypel representing the marriage of Angélique

An Alfa Romeo Giuliettta from 1956, a Mercedes Benz from 1969, a Vauxhall SRV from 1970 are more examples of these “pure beauty” designs. Some are models made in wood, others have actually run. I loved the Piaggio Vespa, a 1951 motocycle, and its ancestor, a 1919 Terrot-Cuzeau motocycle. 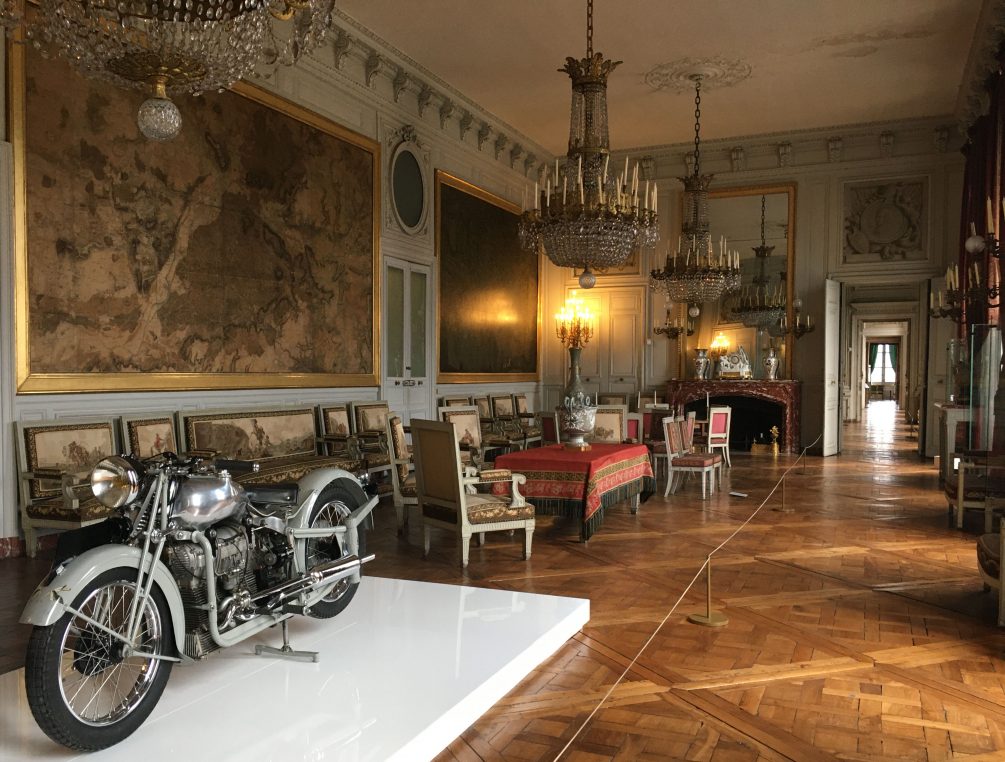 MGC N34 by Marcel Guiguet in the Map Room where Emperor Napoleon III entertained his guests.

I went with my teen age nephews to visit this show and they were so fascinated that I could not keep up with them. This treasure hunt for exceptional cars through the huge castle, is a great iconoclastic idea. And Rodolphe Rapetti  is a daring curator for having brought in so many cars in the “Palais Impérial” of Compiègne. Good for him!

Compiègne was much lived in by the courts of Napoléon and Napoléon III,  who used to spend a month at a time in the autumn where he hunted like his predecessors Louis XIII and Louis XV. It is reachable by car in an hour from Paris and by train in 52 mins from Gare du Nord. You can visit the park and walk in the woods nearby. 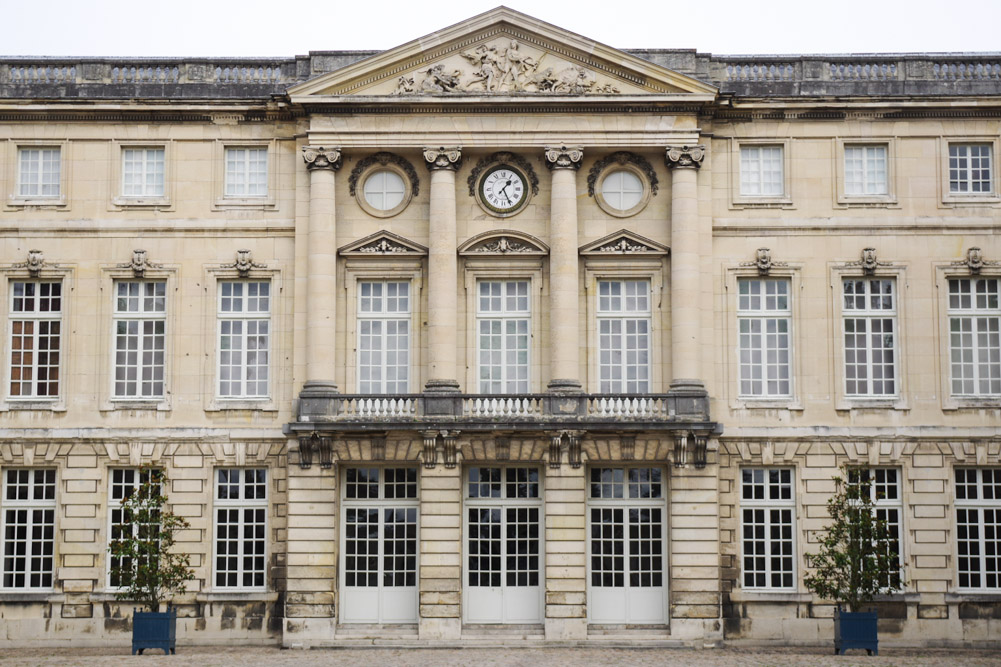 Château de Compiègne was rebuilt in 1751 on a medieval site

Until March 23, closed on Tuesdays.