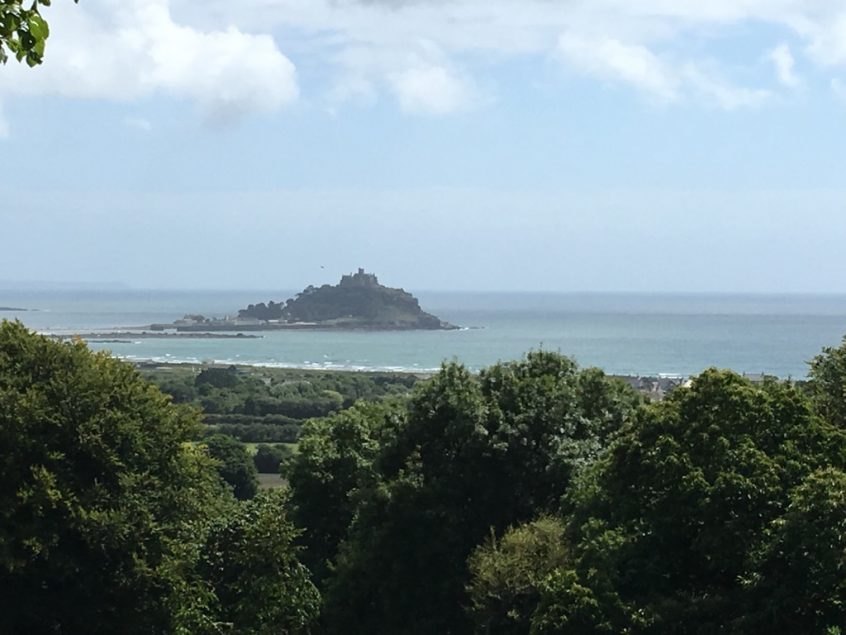 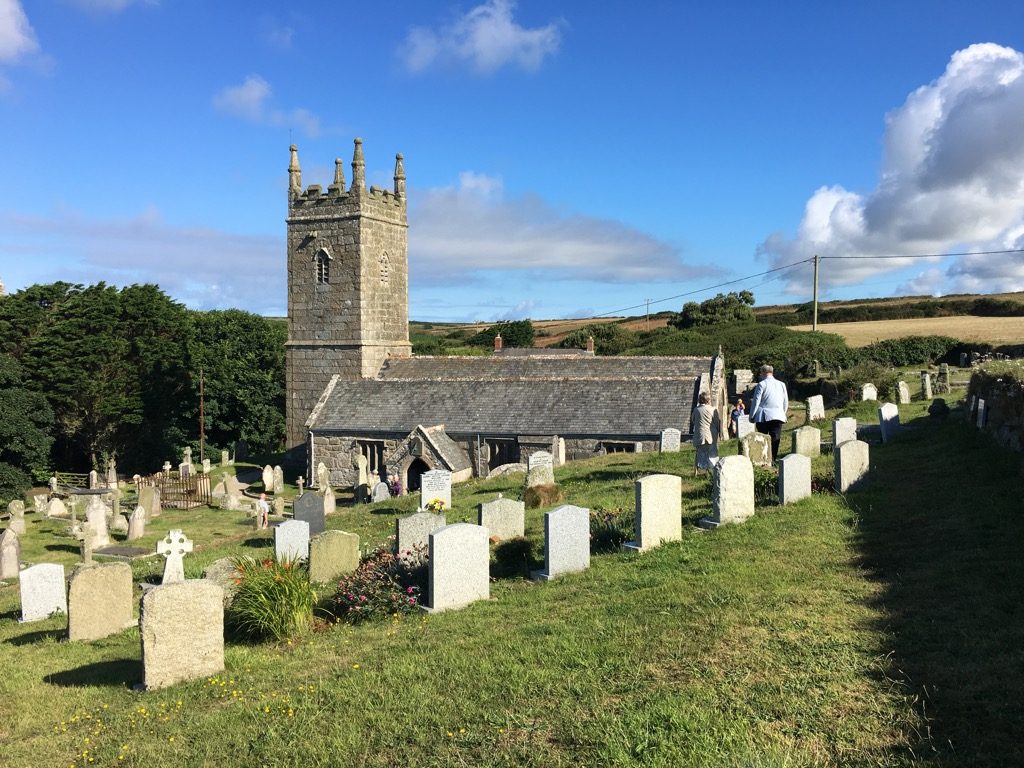 I have been going to Cornwall for 25 years and every time my heart pounds with excitement as I drive from Exeter airport to Penzance and Land’s End. This year was full of surprises with a new sculpture garden in Gulval and more delicious trendy cafés, which took over from the Tate St Ives. 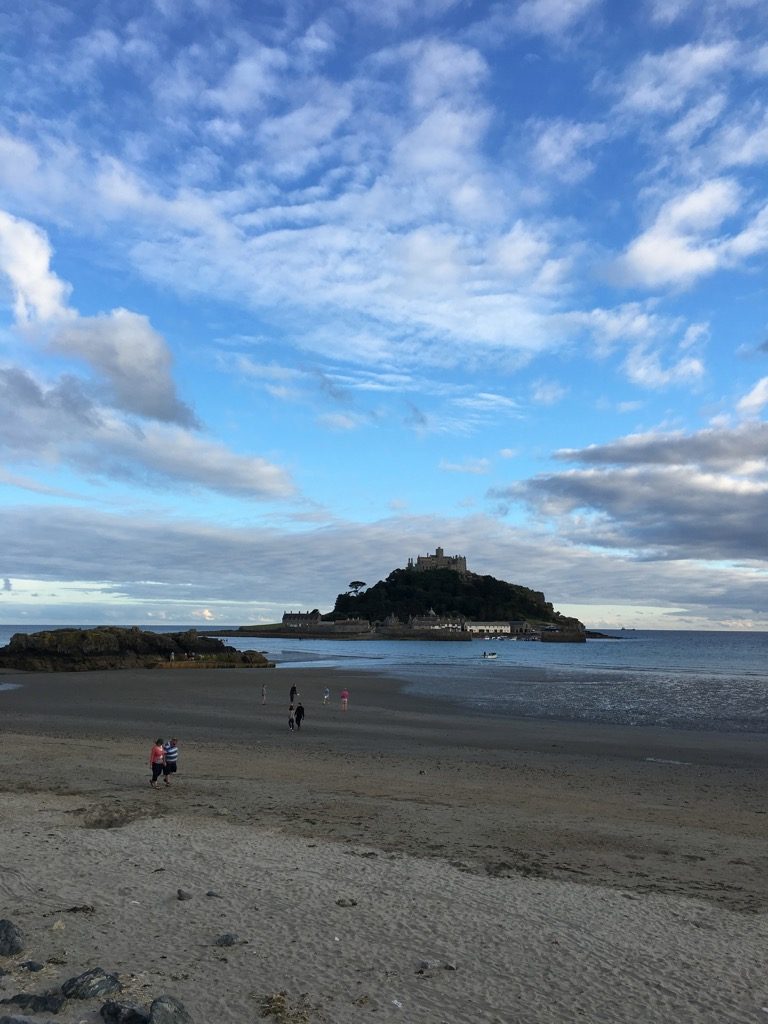 St Michael’s Mount at sunset: it is still lived in by the St Aubyn family

The two and a half hour drive to Land’s end is a short conquest of the holy Grail. Just enough to anticipate the cream teas with scones that await us in Bosistow farm or to check the changing skies as we progress towards the further western part of the British world in Daphné du Maurier and Mary Wesley’s world. 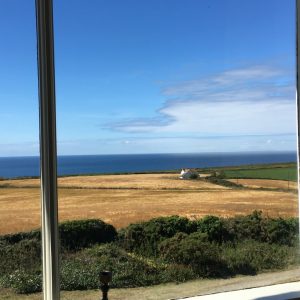 A view from my window at Bosistow farm near Land’s end, crops and cows by the sea

This time, I missed St Ives where the Tate gallery is closed, but loved the Newlyn art gallery where Pakistani artist, Imran Qureishi was showing his beautiful Mughal inspired drawings and a film called « Breathing ». Rachel Nicholson (daughter of Ben) was showing (and selling) her miniature paintings there which are so typically cornish. 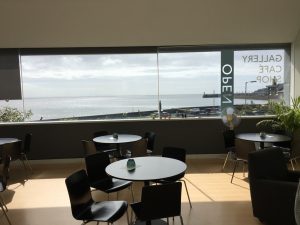 At Newlyn art gallery a trendy café with spectacular views

At Penlee House in Penzance, where we had  crab sandwiches for lunch on a rainy day, « Compass’d by the inviolate sea », was a surprisingly good show of local marine paintings including an 1811 Turner of St Michael’s Mount and Alfred Wallis (1855-1942), my absolute favorite painter who inspired Ben Nicholson with his naive boats and views of Cornwall. Interestingly enough, Turner was sent to Cornwall when the Napoleonic wars prevented Brits to travel to the continent. He was asked to do etchings of the English Riviera, to encourage local tourism… 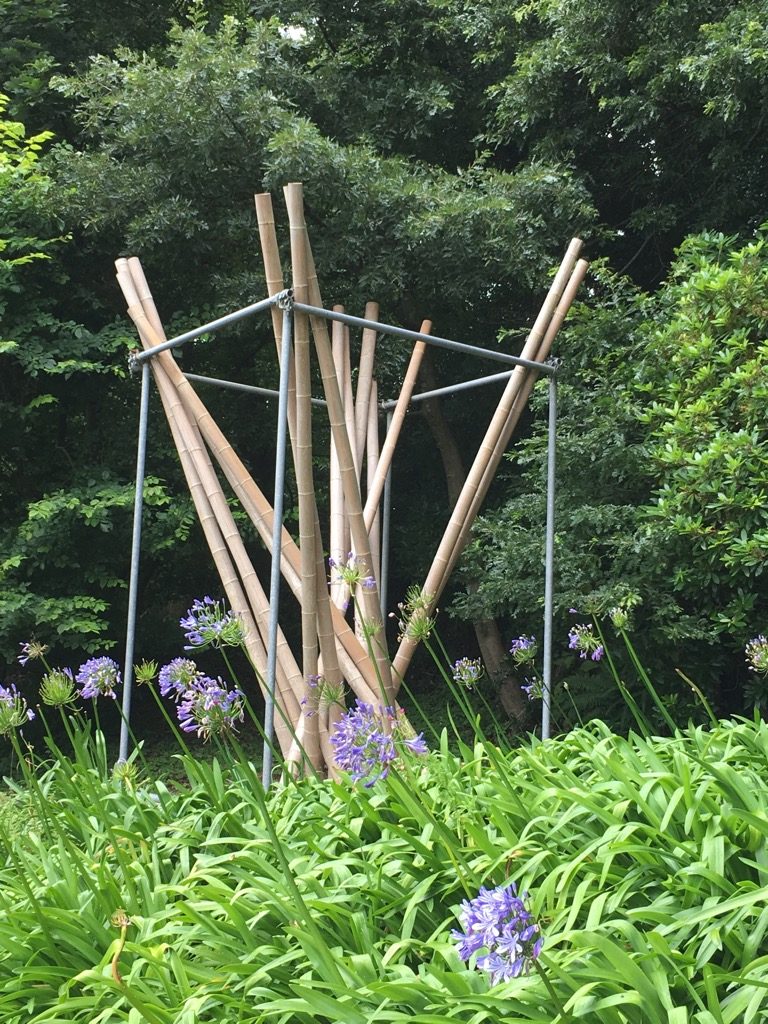 But what was most impressive, is the new sculpture garden opened last year by present owner Dr. Neil Armstrong, in Gulval near Penzance. Tremenheere used to be owned by the monks of St Michael’s Mount in the Middle ages. It was then acquired by the Tremenheere family who owned it for 600 years. Seymour, the last owner is responsible for planting holly, chestnut, beech and oaks around 1830. The 20 acre piece of land is south facing and very steep, so bring your hiking boots ! 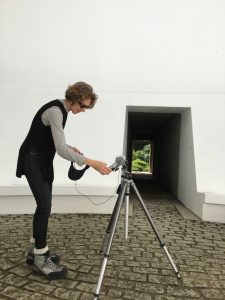 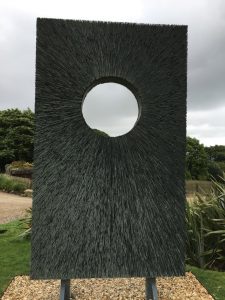 I was excited to discover the excellent artwork by David Nash, Richard Long and James Turrell as well as the most magnificent garden with strong light and dark contrasts. 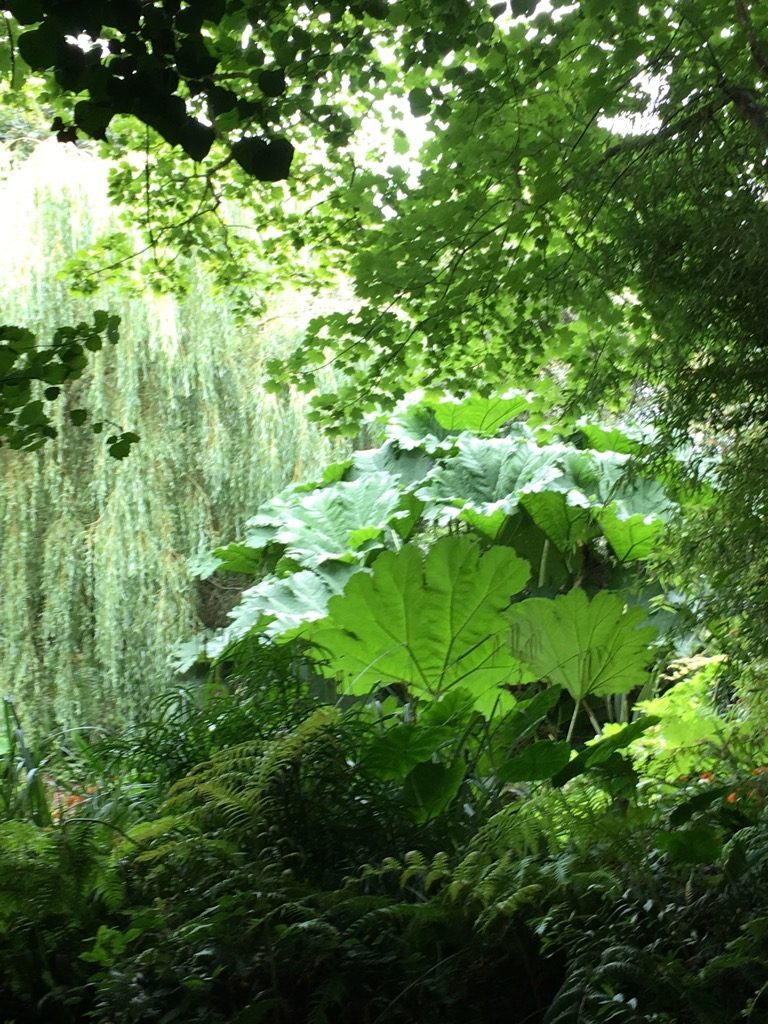 Banana trees and palm trees (thanks to the gulf stream) grow side by side with rhododendrons and gunnera. It is a magical world that you enter through a little hut and path in a dark forest. A few hundred yards further a large open meadow exposes its treasures. On the very top and after seeing Kishio Suga bamboo poles and Peter Randall-Page sculpture, you discover Richard Long’s vegetal line that aims at the sea. 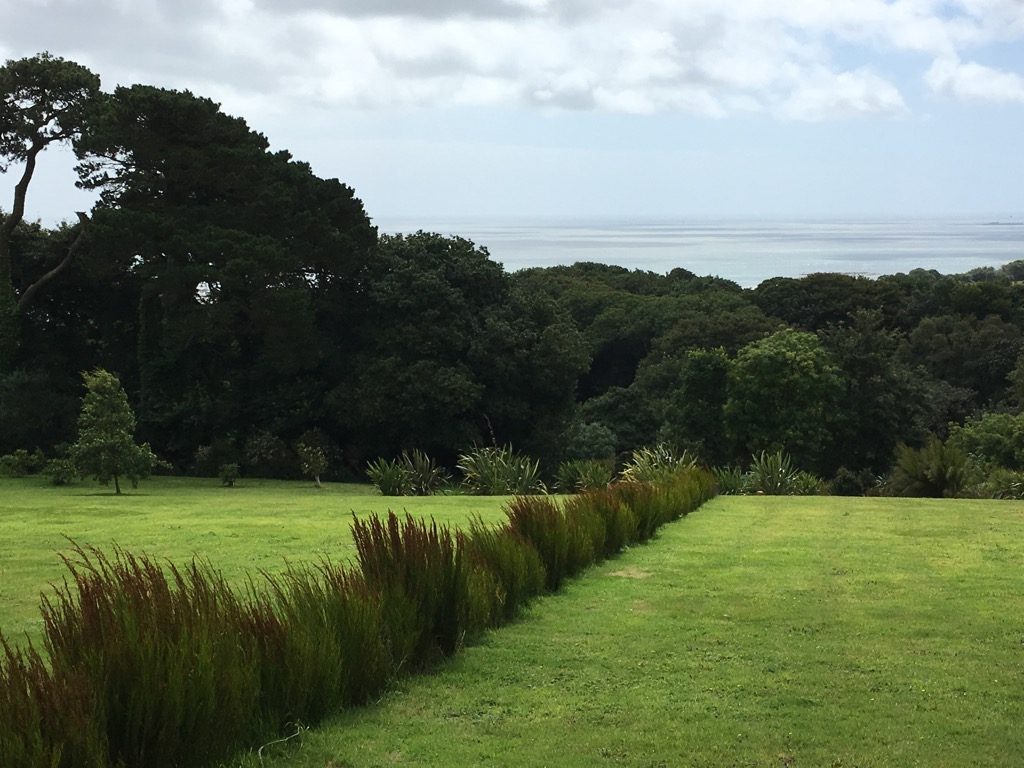 Richard Long’s “Tremenheere Line” is made of South African restio, Boloskion tetraphylllum. It points to the spectacular views from the very top of the garden and faces south

But of course, the height of the excitement is in James Turrell’s skyspace from which you look at the sky. And as opposed to Texan skies at the Nasher sculpture center where I saw my first Turrell “sky”, Cornish skies change every second so the flow of clouds can give you sea sickness !  I met charming New York artist, Michelle Jaffé who was taping sounds from this very special room. 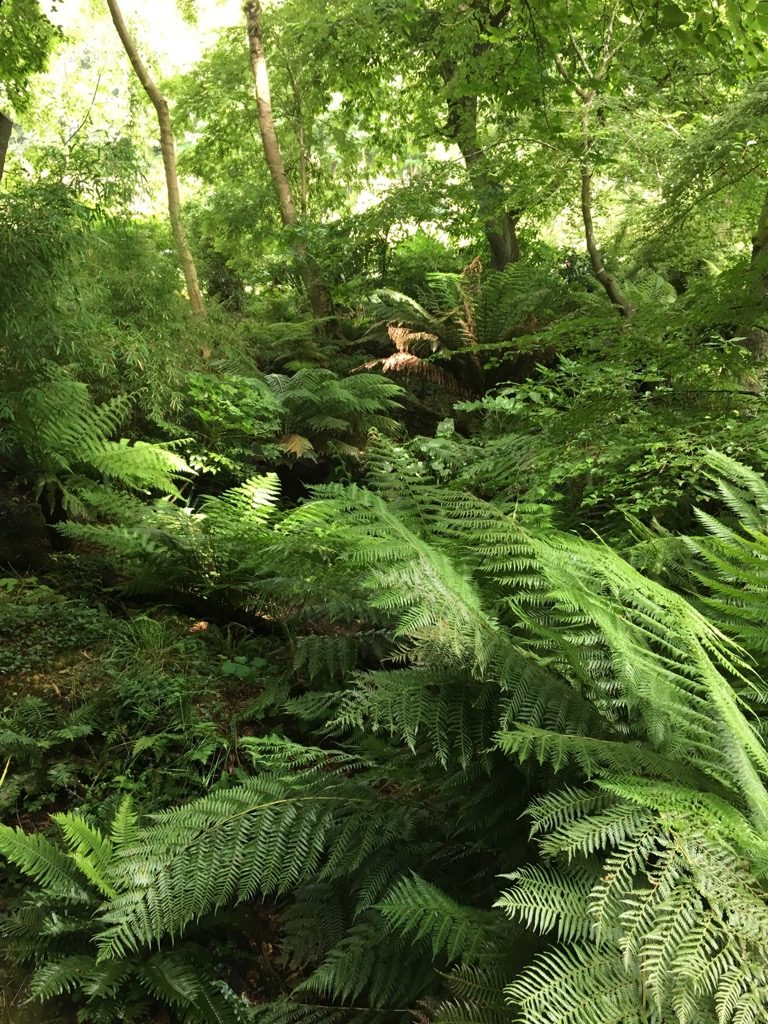 I was lucky to be there on a day when Aqua Oscura was open : it is a water container, which you penetrate in the dark, holding the walls.

Once you have sat for 10 minutes, your eyes are accustomed to the obscurity and you start seeing the reflection from the outside world as devised by James Turrell who was fascinated by this building when he first visited the garden with its owner Doctor Neil Armstrong. This experience reminded me of the Turrell’s piece in Naoshima, Japan, in a little fisherman’s house. 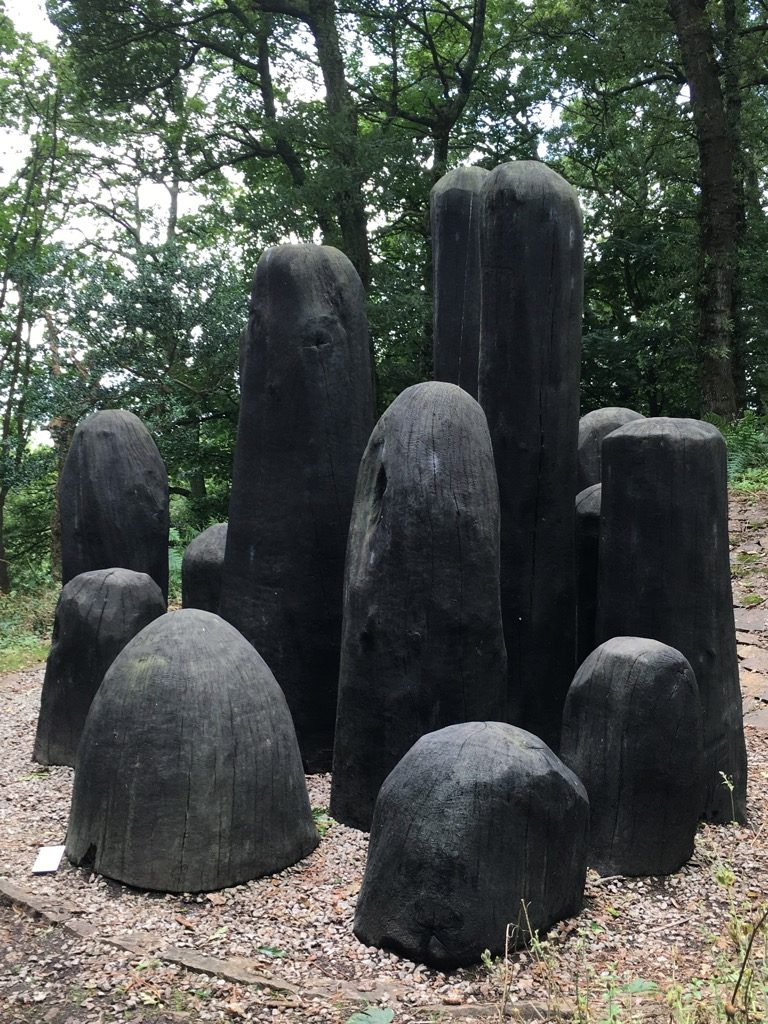 I finished the visit by bumping into London artist, Rose Cecil, who lives in Mousehole. She did not share my crab cake in the restaurant but told me she was starting to write a Memoir and singing in the local choir. I wish she would return to sculpture and painting. 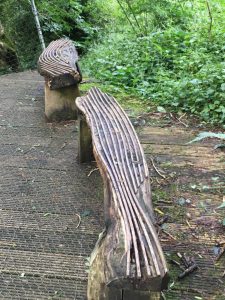 Even simple benches are works of art

But none of this would have been possible if my dear friend Rebecca Fraser had not invited me again and again to discover Land’s End. She is putting on the last touch to her book, “The Mayflower, the story of the Winslow family”, which will be published by St Martin in 2017. A work to watch.

6 Comments on “Cornwall, old and new”