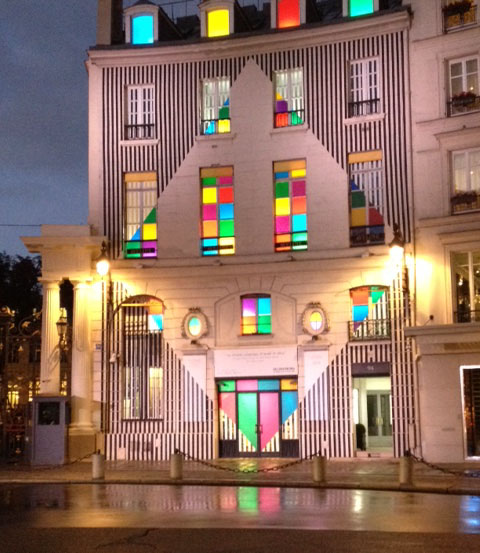 How do you make an 18 th century building look like a contemporary one ? Ask Daniel Buren to disguise it with light and this is how Aveline, the antique store created by Jean-Marie Rossi, place Beauvau next to the Ministry of Interior, has become one of the most attractive sights at night in Paris (until Dec. 1). Something to help the French police to calm down after this week’s riots. If you walk inside, you will discover a fabulous collection of Buren videos and paintings that Rossi has collected since the sixties when he was roaming  exhibitions with is friend Bob Calle. But you might also fall in love with classic XVIII th century furniture again. 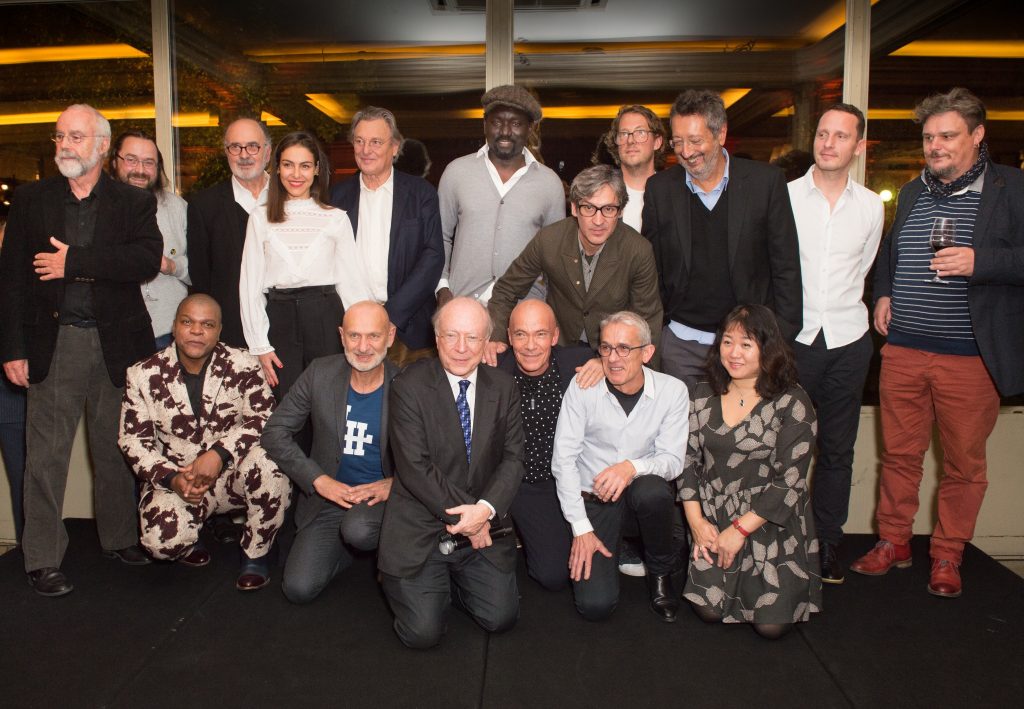 Paris was overwhelmed this week by two tsunamis. The FIAC, Foire internationale d’art contemporain, presided by New Zealander Jennifer Flay, who achieved what many curators and government officials had tried to do for years : reunite the Grand Palais and the Petit Palais, two monuments built as twins (as I learned from Celestine Bohlen) for the 1900 Exposition Universelle …

When Jean-Paul Cluzel, then President of Grand Palais, married his companion Nicolas Droin at Théâtre du Châtelet on June 29, 2013, his speech mentioned that his dream would be to unite these two beautiful and central exhibition spaces, one owned by the City of Paris (Petit Palais), the other by the State and make one cultural hub. It seems that Christophe Leribault and Sylvie Hubac, managed it this time and it was a feast.
Avenue Winston Churchill, which separates both buildings, was cut off from traffic, and artists were asked to paint on the road. Sculptures were exhibited in the gardens and FIAC “On Site” was able to extend into the museum where Oscar Wilde is being shown and also Daniel Templon’s Afro American artist, Kehinde Wiley who makes the most striking stained glass windows on the theme of “The lamentation of the dead Christ”. There are six of them in the museum. 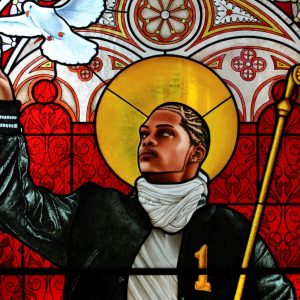 Daniel Templon grabbed the opportunity to organize the most lavish feast on Thursday night at restaurant Ledoyen with the celebration of his fifty years as a galerist (he started at 16 in a cellar).

Bernard Blistène, director of the Pompidou center,  celebrated the man who brought to France Donald Judd in 1972, Andy Warhol in 1980, but mostly had the courage to defend French artists all along his career : Boltanski, Louis Cane, Gérard Garouste who attended, Arman, César, Viallat and Ben, and more recently Brazilian artist Saint Clair Cemin, Japanese Chiharu Shiota, Belgian Jan Fabre, Jim Dine, David LaChapelle, etc… some of his artists talked about him, foie gras and champagne were delicious, Templon could be proud of his achievement and the catalog produced by Christian Blanc is a fascinating tool of contemporary art history. 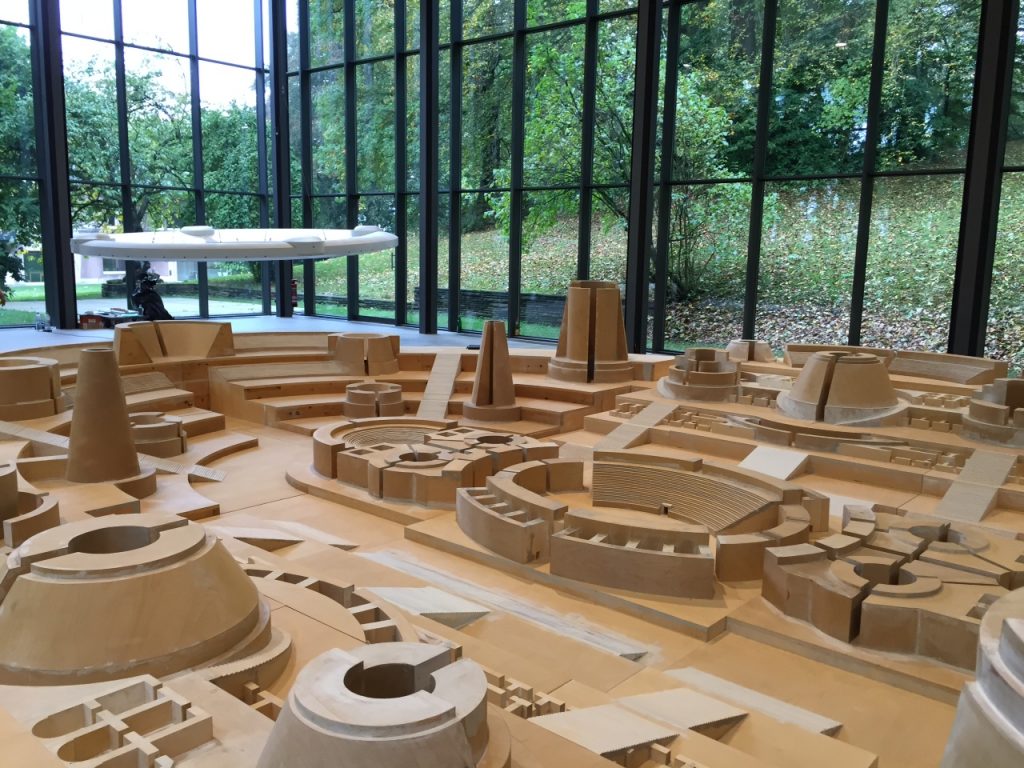 The next evening, was Jean Gabriel Mitterrand’s (the nephew of) ceremony of Legion of Honor at Conseil Economique et Social, an Auguste Perret building… Three hundred guests listened to a tedious Jean Marie Rouart, award him the ensign of Chevalier of the Legion of Honor while his brother Frédéric,  former minister of culture, was chatting away to friends. He is showing “Mnémosyne”, an installation  by Anne and Patrick Poirier, this week in the magic Tony Cragg’s sculpture park of Waldfrieden near Wuppertal. An event not to be missed if you can travel there. 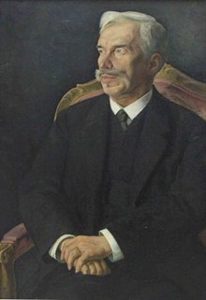 This contemporary art fever was slightly moderated by the inauguration of the Chtchoukine exhibition at Fondation Louis Vuitton: this unique collection of French art from the beginning of the twentieth century, kept at the Hermitage and at the Pouchkine museum, is reunited for the first time, including all the paintings that the Russian art lover had paid for in 1914 and never been able to receive, because of the First World War. One Matisse came from MoMa in NY, “Woman on a high stool, Germaine Raynal”, another one “Intérieur bocal de poisson rouge” came from Beaubourg. On the top floor, are also shown works by Russian artists of the time who were influenced by what they saw at Sergueï Chtchoukine’s house. It is at last the celebration of a great man who fled for France in 1917, with not a work of act in his luggage. His grandson was on television and radio every day talking about his doomed fate.

Last but not least of gossip items, are the two presidential books published within a day of each other by Editions Stock (Hollande) and Editions Gallimard (Mitterrand). Hollande spent 60 meetings over the last four years with two gravediggers from Le Monde who did not let him proof read the book “Un Président ne devrait pas dire ça” (a president should not say this). And the result is what should be, a series of acid criticisms of everybody in France including magistrates and footballers, conversations that you have with your best friend but not with a whole nation, especially when you lead it. Socialists are calling it a political suicide. And it sounds like his political life will soon be over. But he did give a very glamorous party on Saturday night for American collectors Spencer and Marlyn Hays who promised to give 600 major works of art to Musée d’Orsay including some Vuillard and Bonnard. They received the Legion of Honor from the President and celebrated with Orsay curators who are uplifted by the success of “Spectacular Second Empire“.

The Presidential scandal came from the unedited book published by Stock

As for the thousand letters “Lettres à Anne, 1962-1995”, sent by Mitterrand to his lover and mother of his daughter, Anne Pingeot, which everyone praises as being so literary and poetic ! They are mostly a praise of himself through what her very young eyes inspired him. She was interesting on France Culture radio, being interviewed by Jean Noël Jeanneney, who is not only a brilliant historian but also a polite and incisive interviewer. She clearly said she had suffered immensely from this frustrating but fascinating relationship, kept in deep secrecy for thirty years except for a close circle of journalists and friends. How strange to think that our presidents all lead multiple love lives and still have time to govern !

4 Comments on “A crazy week in Paris”