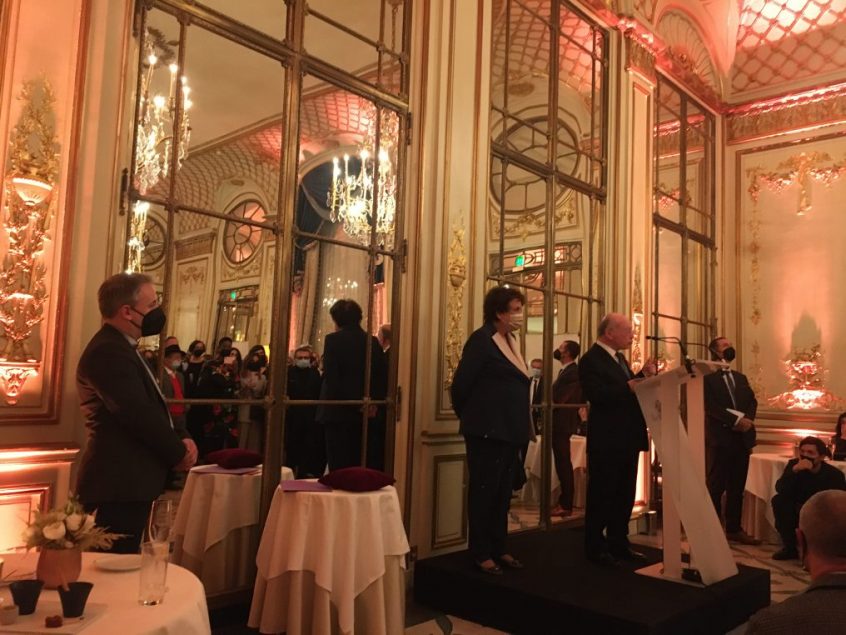 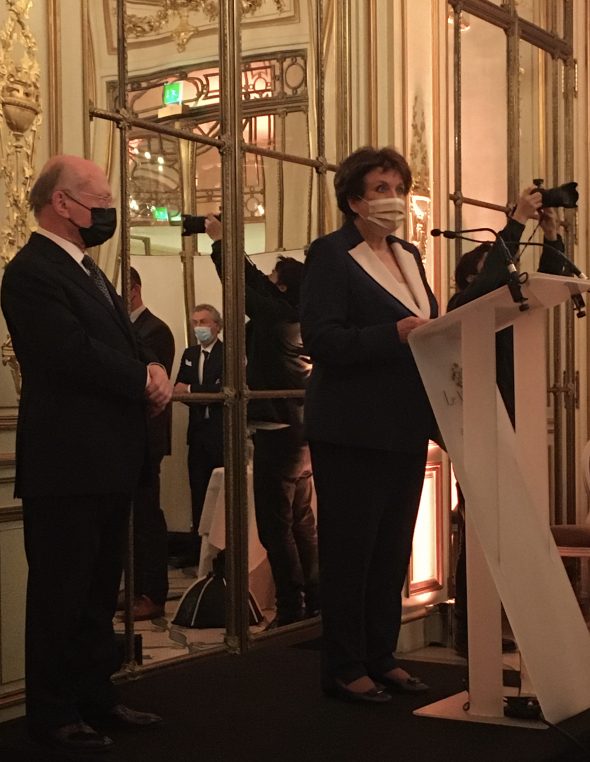 There were so many ministers in the room that the potential cluster had been very well monitored at Hotel Meurice for the Legion of honor of Daniel Templon, one of Paris’ leading art dealer, who founded his first gallery 55 years ago. Minister of culture Roselyne Bachelot, an old friend of his, was awarding him the “rosette” as we call the officier de la Légion d’honneur decoration, Jacques Toubon and Jack Lang, two former culture ministers were also there. The delightful Gabriel Attal, the youngest minister of Macron at 32!  was also present with his formidable and very practical four color Hermès tie. But mostly many artists had made the trip like Jim Dine, Omar Ba from Dakar, Kehinde Wiley from the US, Gérard Garouste from Normandy, Philippe Coignet, Jean Michel Alberola, Pierre & Gilles, etc… The atmosphere was very friendly and he thanked Anne Claudine, his precious gallery director, as well as his son Matthieu who runs the Brussels gallery. 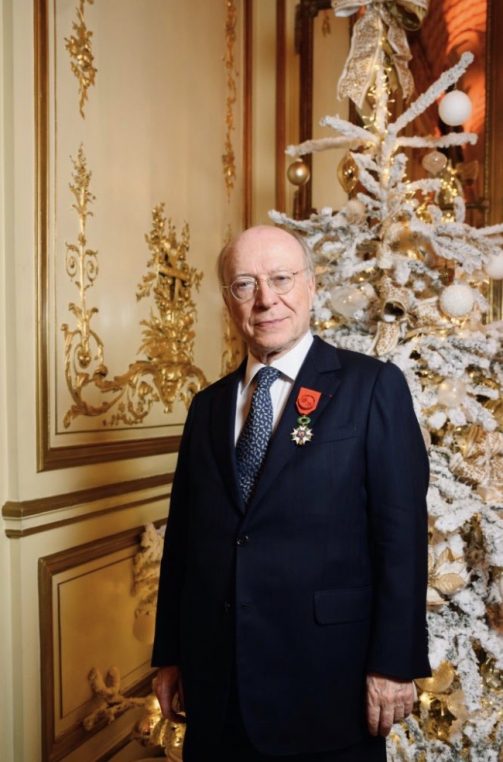 The new Officer of the Legion of honor with is rosette

Templon has always been very faithful to his friends and this showed well last Monday, at the very luxurious Hotel Meurice, in the gold and white paneled room, where the food was super delicious and champagne was flowing. It seemed like a magical happy moment in this week of negative news and relative gloom. There is nothing like a good hotel to cheer you up. His long time friends, Jacques Martinez, Jacques Toubon, Bernard and Catherine de Montferrrand, François Blanc, Stéphane Layani, president of Rungis market, were all there and it was fun to catch up after so many months of social abstinence. 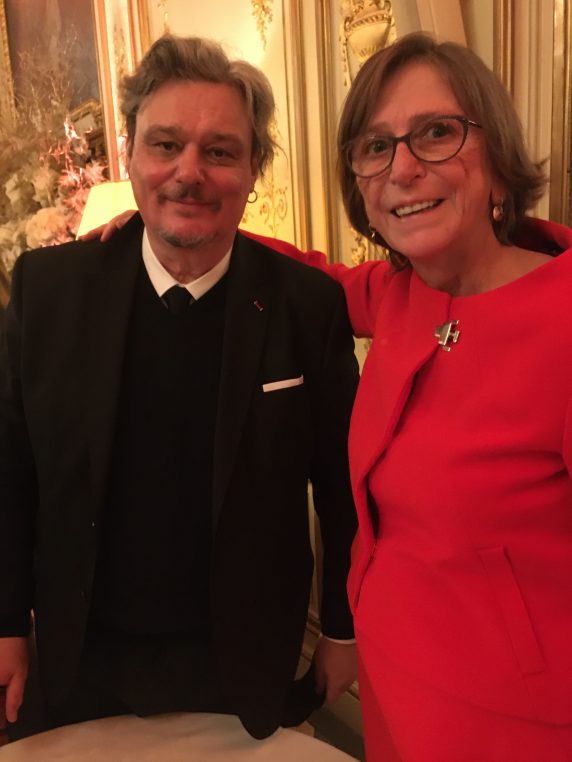 Jan Van Imschoot and his wife at Hotel Meurice

I sat by chance next to Jan Van Imschoot,  the Belgian artist who currently shows at rue des Grenier Saint Lazare, who had come from Haute Marne where he works with is delightful wife Ine. Jean Paul Cluzel, former President of RMN, was there with his husband Nicolas Drouin who runs l’Orchestre de Chambre de Paris. Cristophe Leribault, the new president of Musée d’Orsay, Alfred Pacquement formerly director of Centre Pompidou, etc… It was a jolly evening and we needed it. 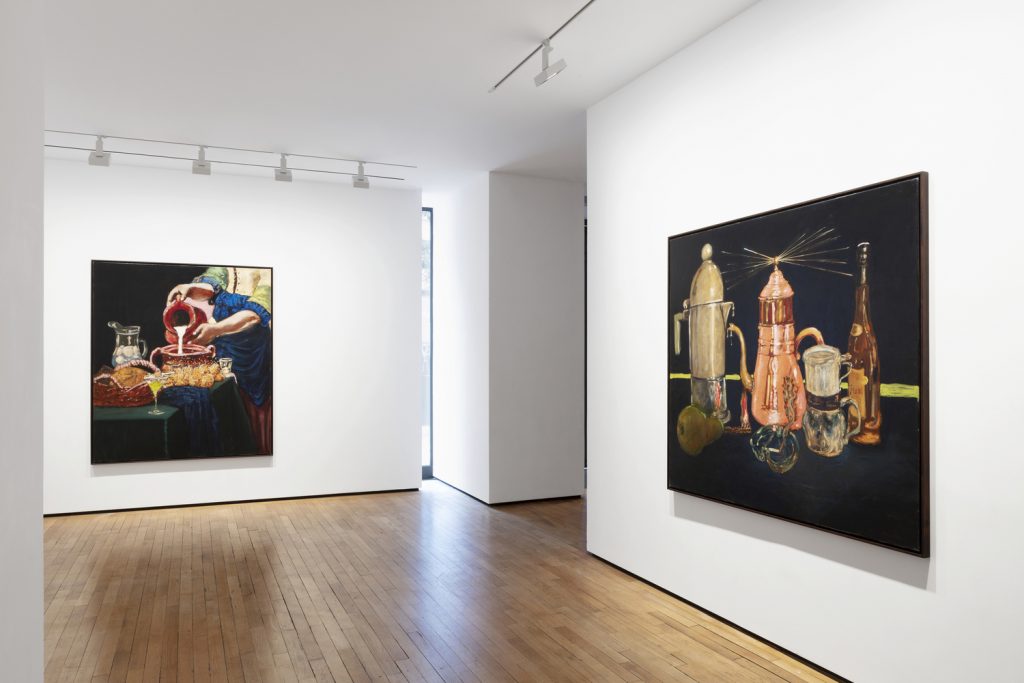 Roselyne Bachelot paid a tribute to Catherine Millet who lived with Templon, when he started, and they founded the magazine Artpress together. He spoke at length about his first Documenta fair in Kassel in 1968 and the discovery of American artists such as Warhol and his encounter with Leo Castelli which was decisive in his career. But he also forcefully talked about the growing importance of the French contemporary art market and his dream to create a Contemporary art Biennale at Grand Palais as soon as it reopens in 2025? 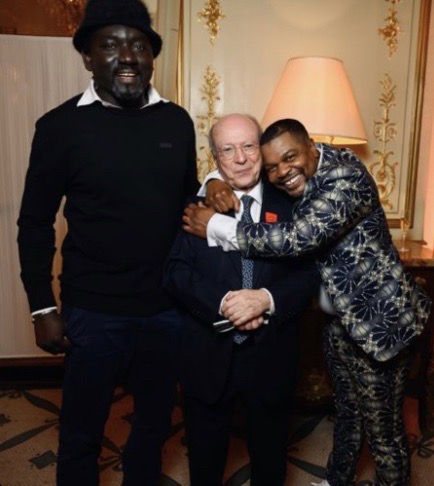 What struck me is how friendly Templon has remained all these years and how affectionate he is with the artists and friends  he has known for fifty years. He was very tense before the ceremony and ended the evening chatting amicably to everyone.