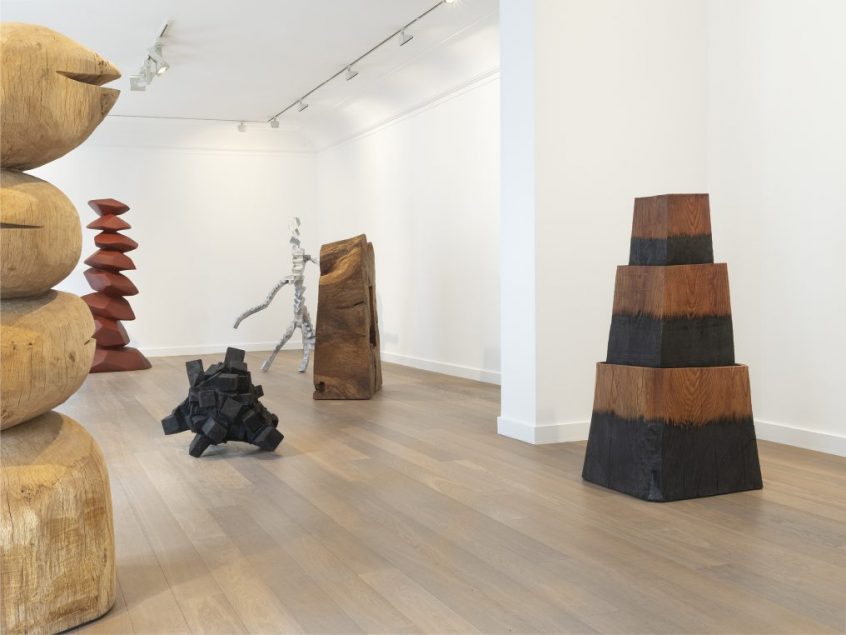 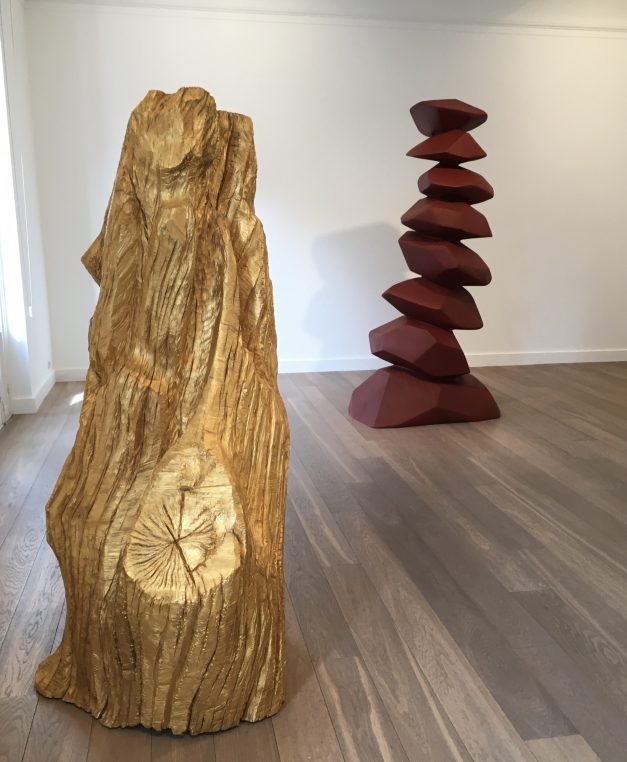 With “The Many Voices of the Trees”, a new exhibition at Galerie Lelong & Co, David Nash proves once again what a brilliant sculptor he is. He shows an oak column, a walnut frame, a part-charred sequoia, an elm frame, a spalted beech, a charred sycamore, a maple wave, a walnut egg… but also drawings on paper and three sculptures in metal. One is in bronze and gold leaf, another is in bronze and the third one in aluminum. The large room of the upper gallery is just stunning with all these works which look like real people talking to each other. After the David Hockney “Ma Normandie” exhibition which brought crowds to this discreet gallery on rue de Téhéran, these new works should be just as exciting for the public. And there are some affordable prints. 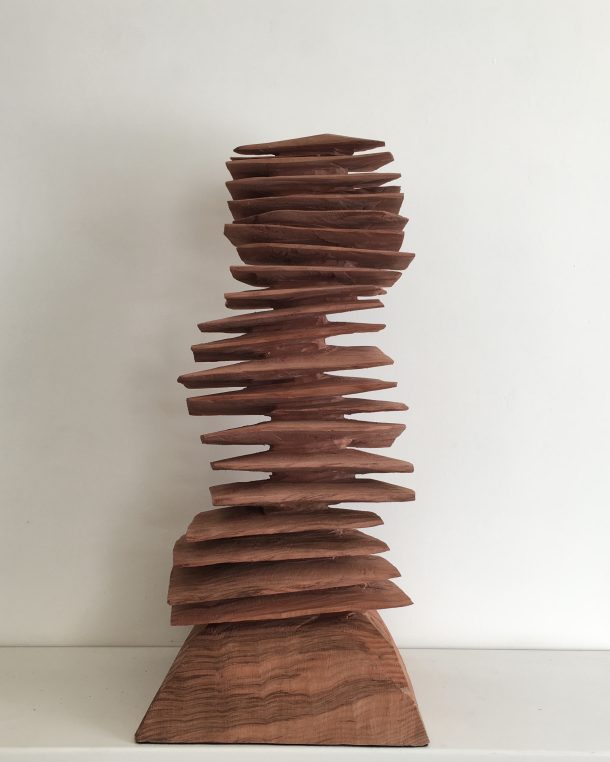 “Trees have a life resembling our own, they communicate with others and have a social life… They take just enough and give back more… For sculpture I only use trees that have become naturally available at the end of their lives. These trees have become a wood quarry for me. Often working where they fell I follow their veins, shapes and volumes to find forms that echo their character and story, giving it voice.” This is how David Nash describes his art in the catalog. 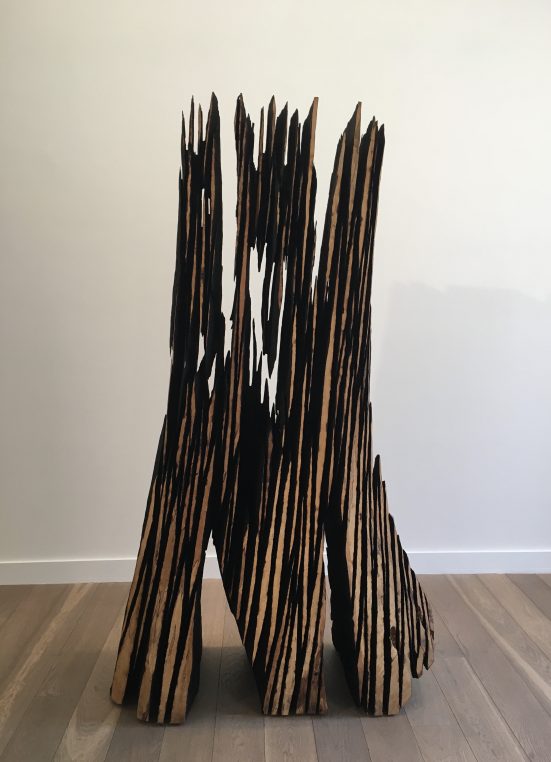 David Nash was born in 1945 in Surrey and now lives in Northern Wales near a forest owned by his father where he used to go on vacation as a child. He is a member of the Royal Academy of Arts in London. Two years ago, he had a large retrospective at the National Museum of Cardiff  who celebrated his “200 seasons” in Capel Rhiw, the Methodist chapel turned studio, in which he works in Wales since 1968. In 2013, he had installations at Chaumont-sur-Loire in France and at Kew Gardens in London. I love the way he partly chars the wood making a painting out of the rough tree. 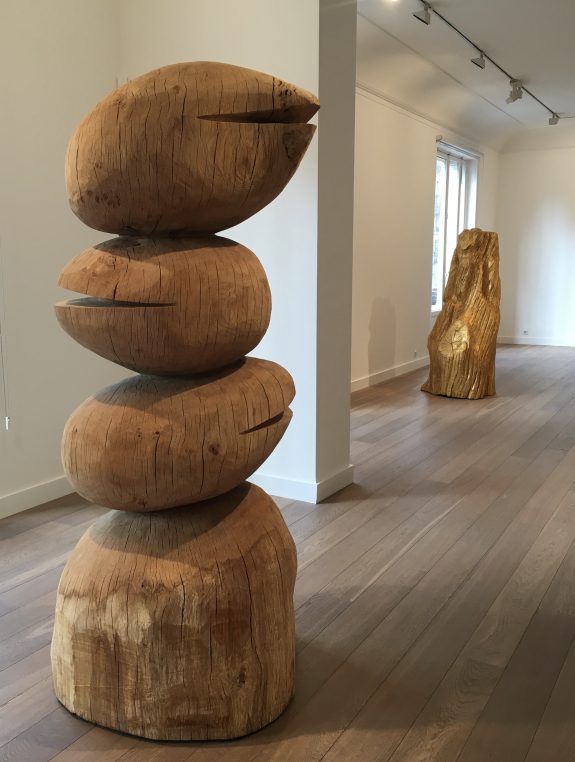 In Wales, Nash has been active at creating an Ash Dome (24 trees planted in a secret place in  1977) and Wooden Boulder, which eventually went out to sea, travelling 50 km from where he had originally sculpted it. “Wooden Boulder  is a profound rumination on the relationship between nature and culture, time and place” he tells in a film commented by James Fox in 2016.

Besides his extraordinary sculptures, and “Stepman” a piece in aluminum, there are also drawings, pigment on paper and pastel on paper, representing trees, cherry and gorse. They are shown in the ground floor gallery. An edition of 30 of Gorse sells for 500€. 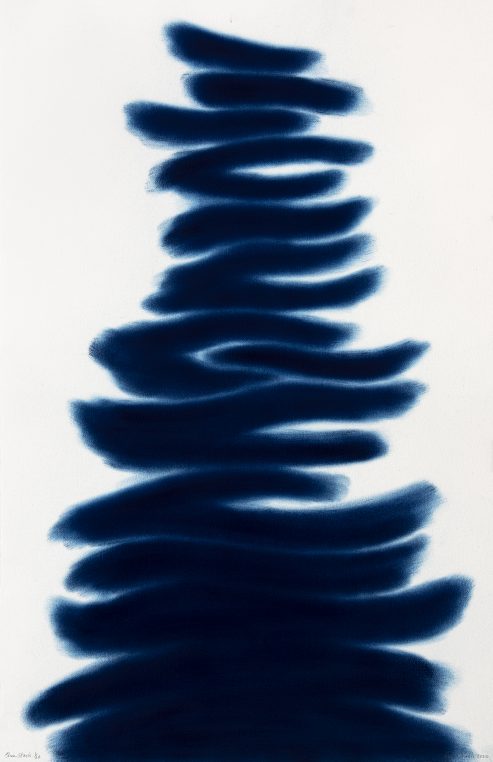