After Germany and Italy, and 55 days later, France is “deconfining” this week and this means that we better stay home, not use the public transports, not send our children to school, and shop shop shop so as to restore the economy. A friend of mine, a great art historian, who’s never stepped foot in her kitchen, bought a Magimix steam cooker. A new life of gastronomy is opening up for her! Books are coming out again and tennis courts and golf courses are opening, provided you play only in twosomes.  Everyone wants to move to the country for good and work from their computers. Galleries and small museums are also reopening, cars are invading the streets… and traffic jams are back. Paris is buzzing, the Hermès flagship store on Faubourg Saint Honoré is also opened… Are we going to regret the quiet times? 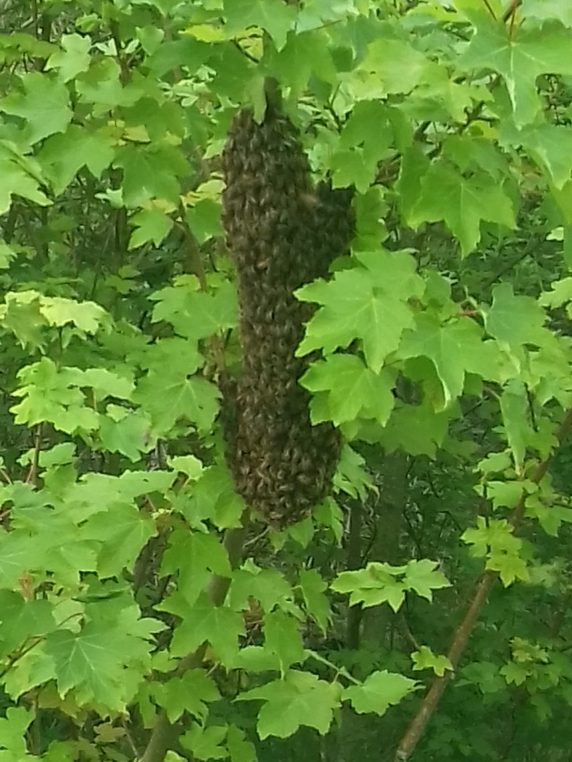 A beehive in a tree near Amiens

It’s fine to entertain friends in small numbers provided we keep social barriers and Denys Laroche’s technique in his wonderful garden of Saint Loup de Naud is a good idea… Just use maxi flower arrangements to replace masks. The good news is that my mail box is now full of reopening notices. Major Parisian galleries like Templon, Thaddaeus Ropac and Sit Down in the Marais, Musée Soulages in Rodez, Musée Ingres-Bourdelle in Montauban (which I am dying to visit), Institut Giacometti in Montparnasse, everyone makes an effort towards resurrection. Christo and Jeanne-Claude during the installation of Wrapped Reichstag, Berlin 1995, at Palais Populaire Berlin

At Palais Populaire in Berlin, the exhibition space opened in 2018 by Deutsche Bank, the Christo and Jeanne Claude  exhibition “Projects 1963-2020” from the Ingrid and Thomas Jochheim collection, has reopened on May 6 th. This is the largest private collection of Christos in the world! Only 35 visitors will be admitted at a time and the entrance is free. But this is a major move when the Beaubourg exhibition of the same artists was not able to open, and the Arc de Triomphe project is postponed until September 2021 (Unter den Linden 5, everyday except Tuesdays). And in the meantime some smaller museums will be opening in Paris on June 16: Maison de Balzac in the 16 th arrondissement,  has just been entirely remodeled with a pretty Rose Bakery tea room overlooking the Eiffel Tower from its large garden. At the moment an exhibition of Spanish painter  Eduardo Arroyo (1937-2018), one of the founders of Narrative Figuration, is entirely dedicated to Balzac’s works and legacy. It adds to the already charming premises, where you can discover Balzac’s desk, sculptures, portraits and numerous engravings of La Comédie humaine. Musée Bourdelle and its intriguing Danish sculptures by Jacobsen and Musée de la Libération at Denfert Rochereau are also opening as well as the collection of  drawings “La Force du dessin”  (In the Drawing room) at Petit Palais. It was started in the 1970’s by the Prats and it will last until October 4. One of the lovely surprises in the mail this week,  was to find this photograph by Karen Knorr, an American photographer who lives in London and whom I am a fan of. She shot it at Château de  Chantilly in 2008 while pursuing her series of stuffed animals in French museums. Through the open door you discover the Singerie, one of the most amazing paneled rooms with monkeys in the castle of the Condés. Her more recent pictures take place in Indian palaces and in Japan. She alerted me to a wonderful website where you can acquire modestly priced artworks, #artistsupportpledge and @artistsupportpledge: 20 % of the amount you pay is directly given to starving artists. 20 million euros have been raised so far.  It is worth checking. Tibetan abbot, Nicky Vreeland sends out regular newsletters with his photographs from confinement in Karnataka, India. He has recently concentrated on a series of masked monks. Very unusual.

I have been watching a French-American  series on Netflix, called “The Eddy” directed by Damien Chazelle whose first film Whiplash I loved. It is based on a jazz club in Paris owned by a New York pianist Elliot Udo played by the tantalizing André Holland. His daughter Julie (cute 21 year old Amandla Stenberg who had Danish Inuit ancestors) arrives from New York and adds to his current problems, trying to save the club from bankruptcy.

Amandla Stenberg and André Holland are captivating in The Eddy

All musicians and singers are attractive and the presence of Glen Ballard as music producer (he worked with Michael Jackson and Elton John) is a guaranty of the quality.  You might find there is too much music at times, but the story which mixes the hot suburbs’ life and the underground night life in Paris, the dialogues which are often in Frenglich and the fabulous acting, give a true quality to this Netflix original which started on May 8.

And the Cannes Festival, which would have started on May 12, is going to give Cannes 2020 certificates to some films from its selection. It might even join the Mostra in Venice at the end of August, to cohost some films. That is if the Mostra is taking place? But one thing is guaranteed, Pierre Lescure remains as President.

3 Comments on ““Deconfinement” and new habits”