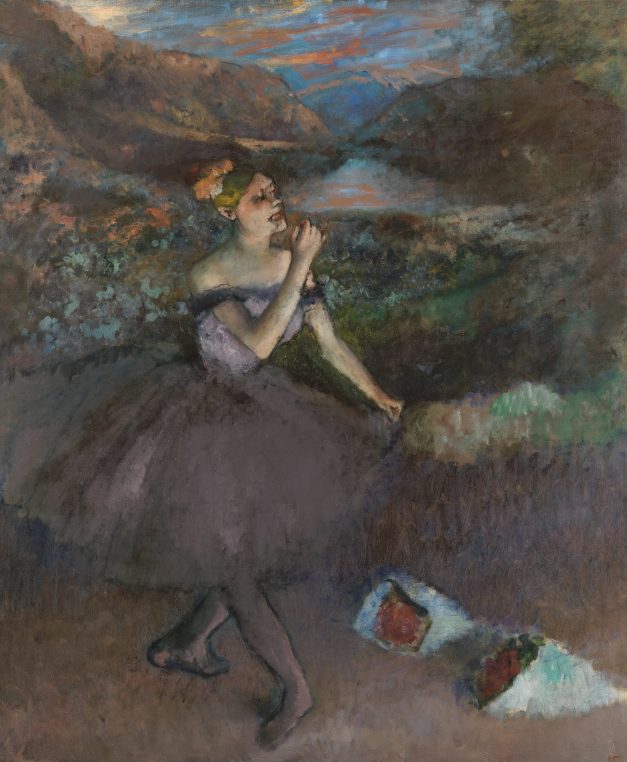 How extraordinary that Henri Loyrette has come back to Musée d’Orsay after having been its Director and then President of the Louvre. And he returns with the artist he has most studied in his life, Edgar Degas, on the theme of the opera. For he also is the President of the celebration of the 350 years of the Paris Opera. A common passion he has with the painter (better known for his ballerinas), which led to this elegant and whimsical exhibition, organized with the National Gallery of Art, Washington, “Degas at the Opera“.

Walking through the sculpture nave of the museum conceived by Gae Aulenti is a wonderful introduction to the show we are about to see. I was a little nervous at seeing yet again Degas’ ballerinas which are so often shown in group exhibitions, and I was pleasantly surprised to discover so many new  paintings which were lent from all over America, London, Glasgow and Germany.

The first room refers to Degas’ admiration for Giotto’s painting of the movement, which will influence his treatment of dancers, their apparent spontaneity and casual attitudes.

The son of a banker, who held a salon for amateur musicians, Degas was raised in a musical atmosphere with a sister, Marguerite, who was a singer, and he portrayed many musicians as early as 1860 when he was 26. The first portrait was of Désiré Dihau, a bassoon at the opera, which brought him some success. 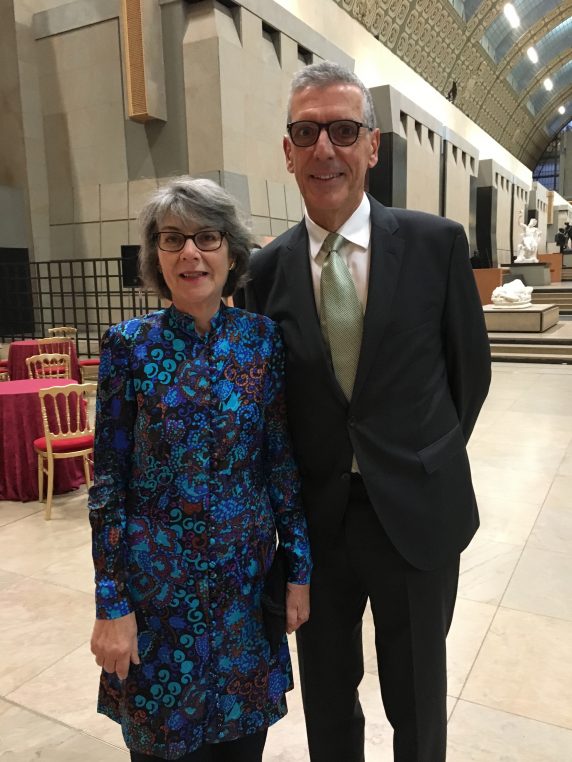 Dancer Eugénie Fiocre, whom he was in love with, and paintings of the ballet “Robert le Diable” by Meyerbeer (bought by merchant Paul Durand-Ruel), will establish him as a painter at the opera. This is when he portrays the musicians in the orchestra in salle Le Peletier (destroyed by fire in 1873), the ancestor of Opera Garnier, which he abhors.

There is a large model of Opéra Garnier at the center of the exhibition, which marks a turning point in the show. Degas concentrates on “behind the scene” and stage descriptions. He is introduced by his friends Ludovic Halévy, Henri Meilhac d’Offenbach and Georges Bizet and very soon starts painting rehearsals, with the mothers of ballerinas, who often act as “madams”, trying to place their daughters with  rich protectors.

These scenes are for me the most touching ones in their intimacy. You often find a dancer scratching her shoulder or fiddling with her ballet shoes, and these gestures give life to the models. There are many large pastels, which travelled from Washington or Frankfurt, and they are spectacular. A very rare event, for pastels are so fragile! 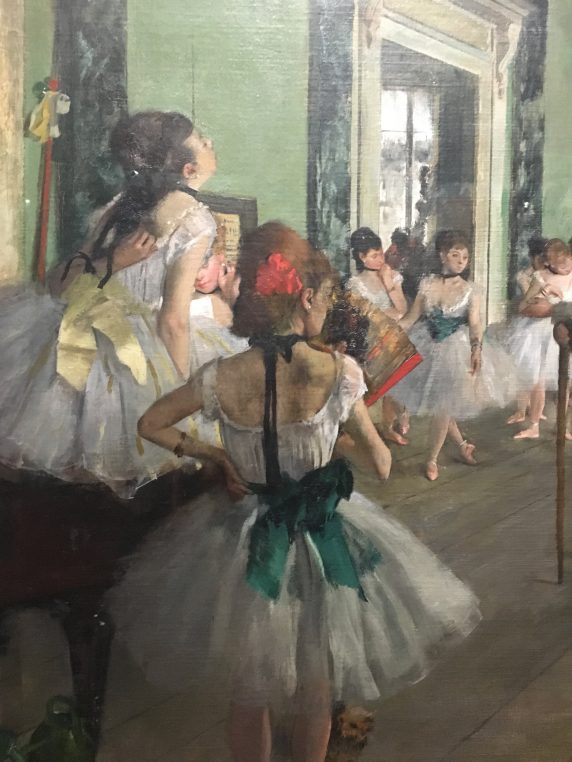 A whole room is dedicated to elongated paintings with a particular format, where dancers are treated in a diagonal way. (He also painted jockeys and horses in this format). Another is devoted to works with a special light. Stage light on the bodies often give a strong glow which is perfectly illustrated in the last painting of the show, the spectacular “Danseuse aux bouquets” lent by the Chrysler Museum of Art in Norfolk. 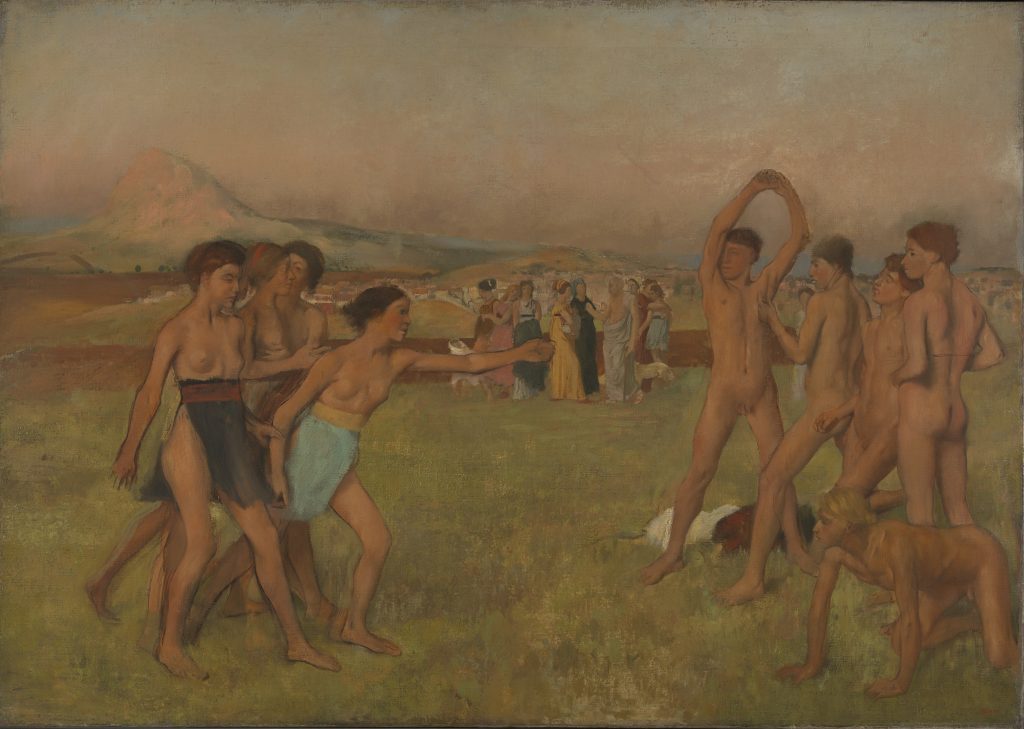 A preparatory drawing and a painting of “Petite fille spartiate provoquant des garçons” are particularly fascinating in their modernity of theme and realization. 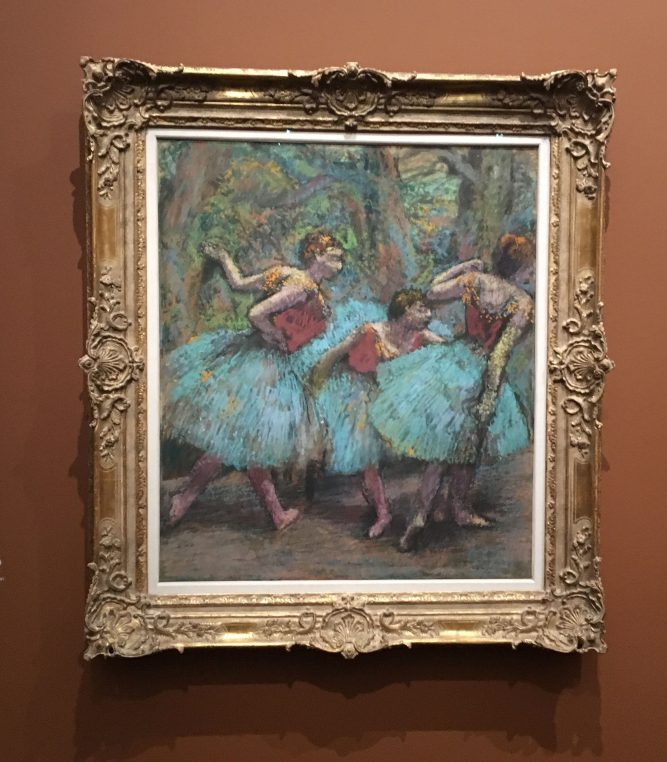 Degas had travelled to Naples, Rome (where he befriended Gustave Moreau) and Florence for three years at 22, and later in life, to New Orleans where he visited relations on his mother’s side.

The huge success of this exhibition is due to the talent and passion of its head curator, Henri Loyrette, who asked his wife to find a flat in the 9 th arrondissement after he retired from the Louvre, in order to be as close as possible to Degas’s studio on rue Ballu! His biography of the painter published by Fayard is a must read (in French). 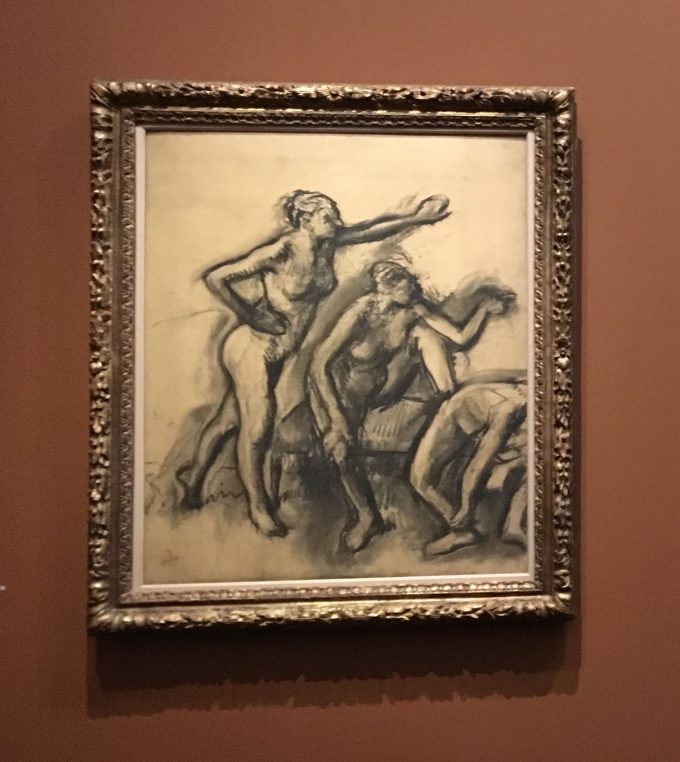 The exhibition is until January 19 at Musée d’Orsay. Concerts and films on opera selected by Frédéric Mitterrand will take place at the auditorium at lunch time and in the evening. At the National Gallery of Arts, Washington from March 1, 2020.