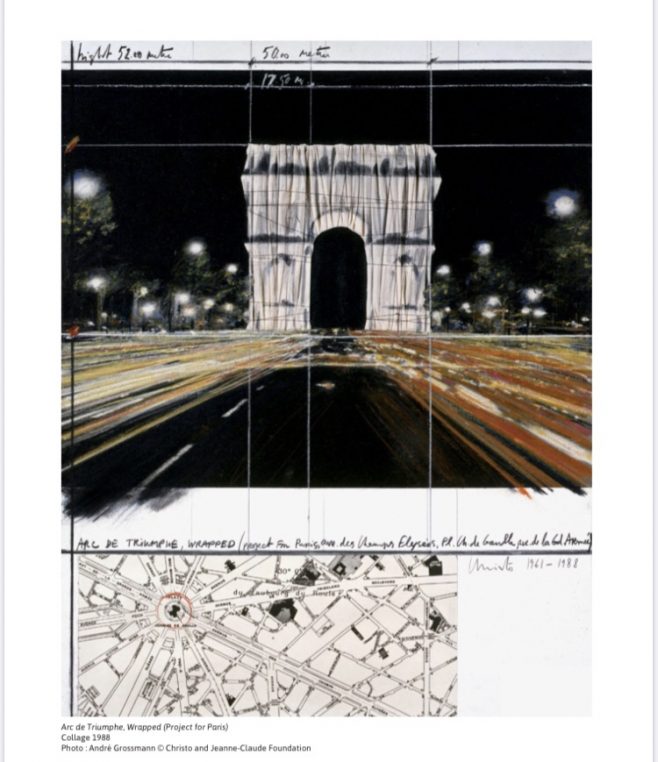 Ambra Senatore, “We need a secretary”, at the Biarritz dance festival ©Bastien Capela

September is traditionally in France the busy month of La Rentrée. Schools have resumed last Thursday and all the families are back in town. This week, ArtParis is opening on Thursday 9, at the “Grand Palais Ephémère” built by Jean Michel Wilmotte in the Champ de Mars, while Grand Palais is under works. 140 galleries from 20 countries will be exhibiting  and this event socially replaces the defunct Biennale des Antiquaires. In Biarritz, the dance festival “Le temps d’aimer la danse” (time to love ballet), initiated by Thierry Malandin, is taking place between 10-19 September in the whole area. And the greatest news of all is that l’Officiel des spectacles, the tiny magazine which lists all cultural events, movies, concerts, theatre and art, is back in print. Its cost has doubled (1,80€) but remains modest.

If you have not done so yet, book a ticket to walk into the Arc de Triomphe wrapped in blue, silver white and red by Christo (September 18- October 3). The first pieces of fabric already float on top and everyday you can notice new changes. It is one of the most intricate engineering projects of the moment, and the artist was able, before he died in May 2020, to see a model at Les Charpentiers de Paris‘s site in Bagneux. This company is in charge of the technical realization in complete respect of the reactivation of the Flame of the Unknown Soldier which takes place every evening at 6.30 pm.

Up to a thousand workers are involved including some for the securisation of the site, a full antenna of the Red Cross will be permanently on premises as well as the police of the 8 th arrondissement. Anne Hidalgo is making sure to promote her image through this last project overseen by Christo and President Macron has approved it personally. Beware though! on the three week-ends, the place de l’Etoile will be closed to cars. 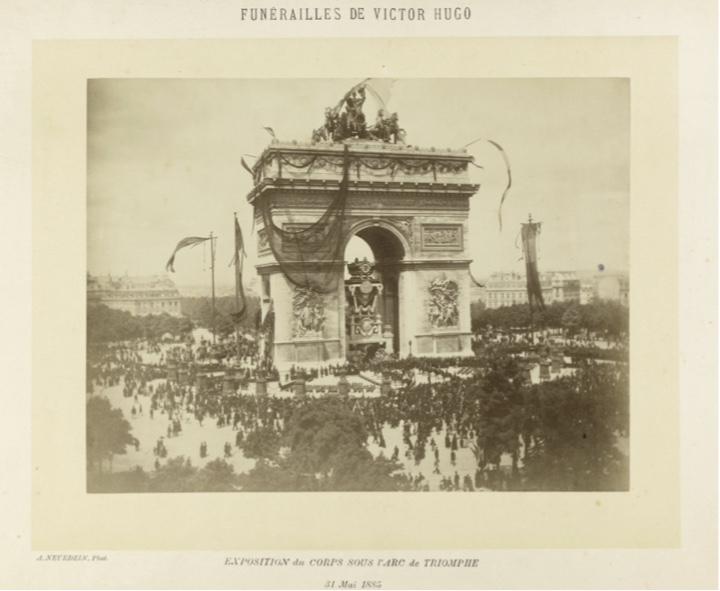 Visit the avenue Matignon where many galleries of the Marais have moved like Nathalie Obadia (at 91 Fbg St Honoré) and where, at n°9,  Jacques Grange has renovated the exhibition space on the ground floor of rue de Ponthieu for Christie’s. Galerie Lelong is inaugurating Ernest Pignon Ernest’ photographs of Haïti at n°38 and Perrotin has opened new premises at n°8, with an exhibition of Japanese ceramics curated by Takashi Murakami. Kamel Mennour shows Bertrand Lavier at n° 28. 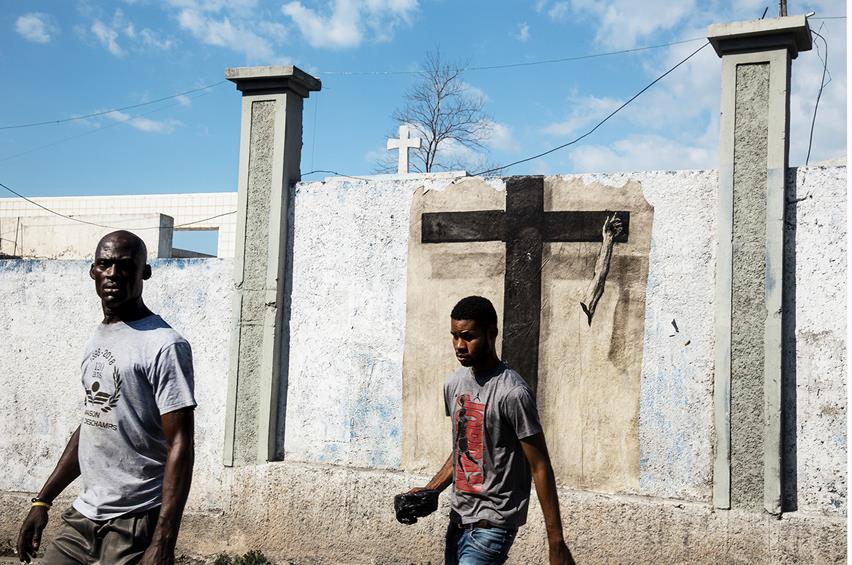 At Agnès B.’s head offices, 17 rue Dieu, near the canal Saint Martin, there is an extraordinary photo show by Aglaé Bory who is the winner of the first Prix Caritas de la photographie sociale whom the fashion designer-photo collector presided this year. Sponsored by le Secours catholique, Fondation Caritas is the largest French foundation dedicated to fighting poverty. It awarded the prize to an elegant and hopeful series of photographs of migrants, “Odyssées”, who are waiting for their papers in Le Havre. Aglaé spent five months, on and off, in the large harbor on the channel, run by Edouard Philippe, shooting fifteen volunteers whom she met through migrant’s associations. A catalog of the show is published. 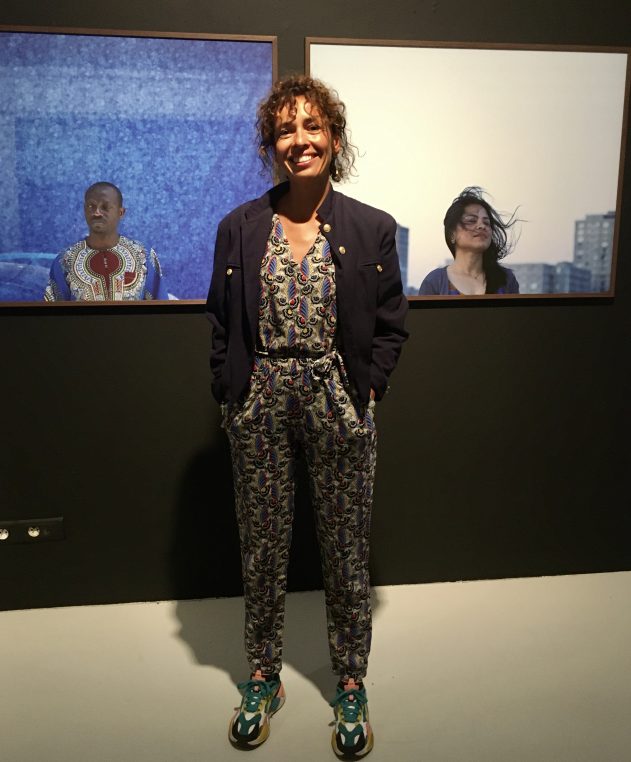 Aglaé Bory in front of “Mohammed” and “Loan”: she is the first laureate of Prix Caritas for social photography

Specialized in docu-fiction, she observed that migrants are always treated as a group while they come from different continents and very different cultural backgrounds. Her talent was to give them each an individuality, a character and originality and she succeeded in giving them also elegance and style with great poetry. She studied history of art in Aix en Provence and photography in Arles and has won countless prizes for her photographs of Paris’ migrants scenes. You can see (and buy) even more photos on her website including an intriguing departing ferry boat which disappears under our eyes. 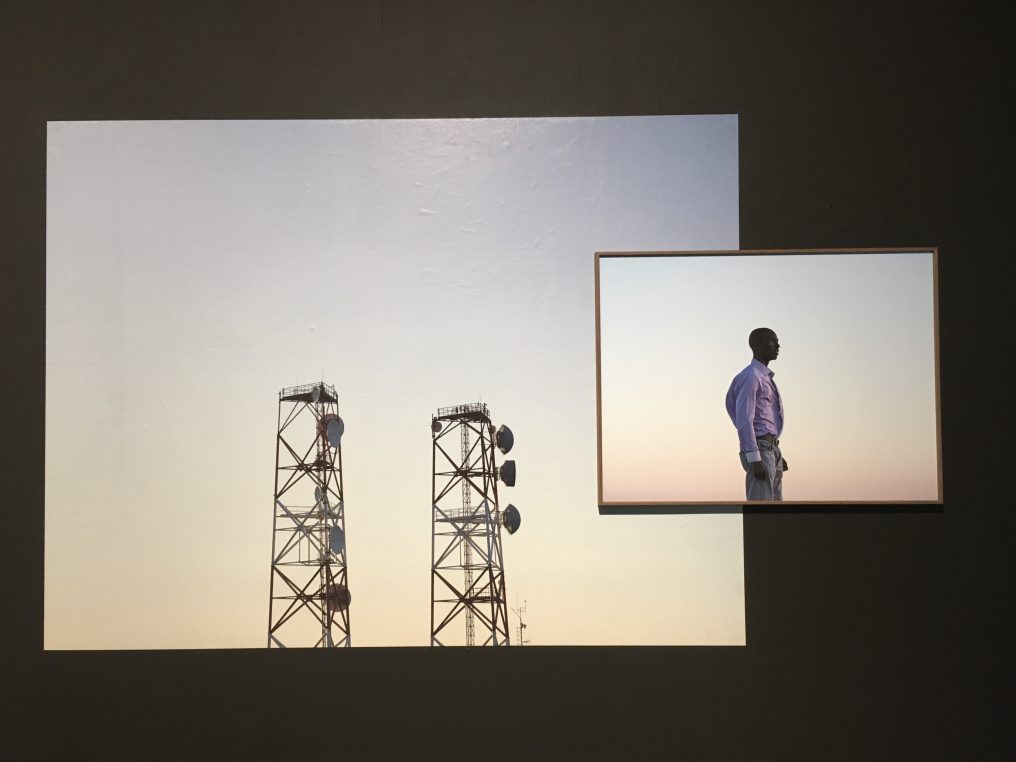 Her characters are called Ibrahim from Mauritania, who arrived in France 17 years ago and still waits in clandestinity for his papers. Omar who is lying on his bed, Hiba from Sudan who arrived with her son Omar. Gohar from Armenia and she fled Russia with her two daughters who attend school in Le Havre. She is still waiting for her papers. Abdelrazik stands on a cliff in Sainte-Adresse, the famous elegant suburb of Le Havre where all the Impressionists painted. He is from Darfour in Sudan. There is one Afghan, Moustafa from the Hazara people. He used to teach history  and is now a political refugee. 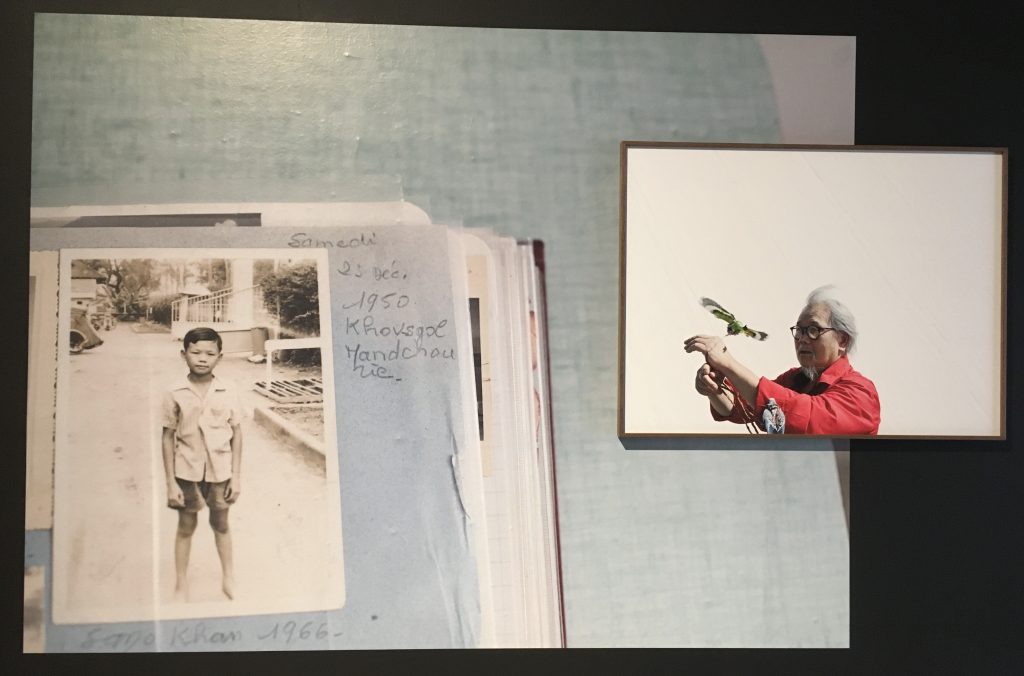 Samo and his birds, Le Havre 2018 with his picture as a child in Manchuria

The first picture of the show is of Samo, born in Mongolia who lost his mother very young. Placed in an orphanage in Manchuria he was found by his father at age 12. He is now French and has used photo albums to try and recreate his past.  Loan is from Vietnam, she married a Frenchman and immigrated to France. Her children remained in Vietnam. She works at a school in Le Havre but her divorce cancelled her residence permit. All these pictures are beautifully displayed on the black walls of Agnès B’s gallery and can be bought directly from the photographer Aglaé Bory. (Agnès B’, 17 rue Dieu, until September 11). 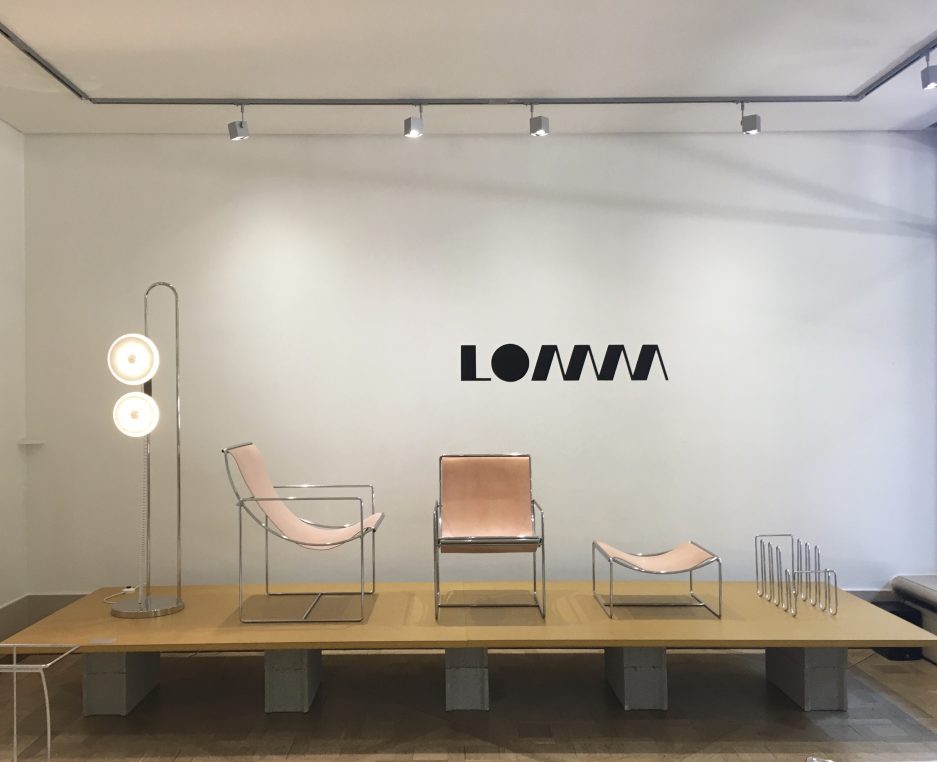 A lamp, a magazine stand and a seat from the 1970’s designed by Odile Mir and edited by Leonie Mason

If you walk by the gardens of Palais Royal, make sure to visit the Joyce gallery at 168 galerie de Valois, where LOMM furniture from the 1970’s is being shown until September 13. It is a genuine reedition of sculptor Odile Mir’s work produced by her granddaughter Leonie Mason, with some vintage seats exhibited. 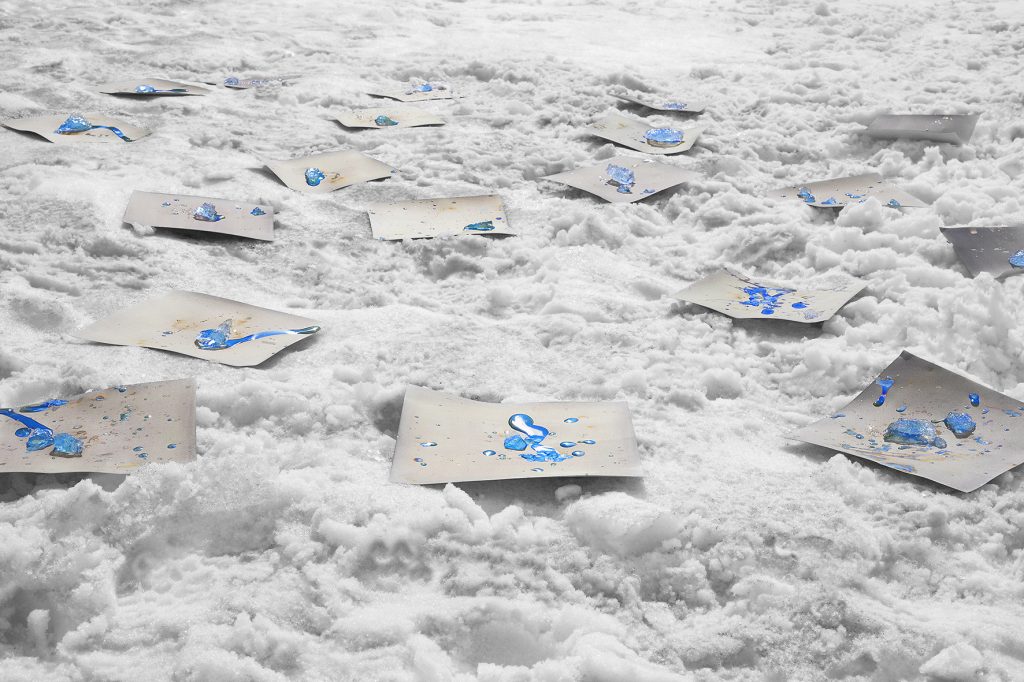 ArtParis is taking place from 9 to 12 September, 12 pm to 8 pm, at Grand Palais Ephémère on the Champ de Mars. Yan Pei Ming is one of the guests with Marcella Barcelo and new young artists will be showing in the section “Promesses”. Claude Bernard and Jeanne Bucher are among the star galleries.