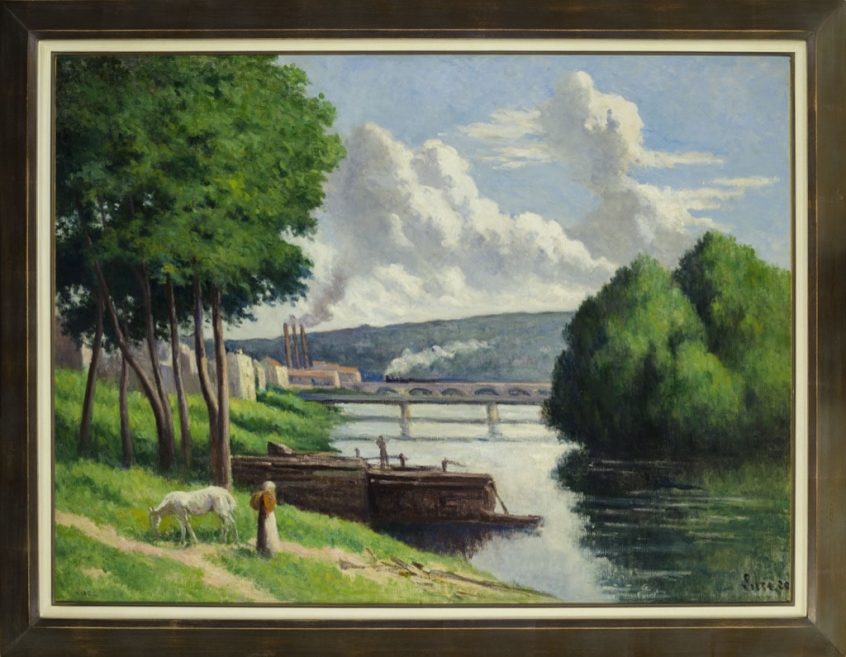 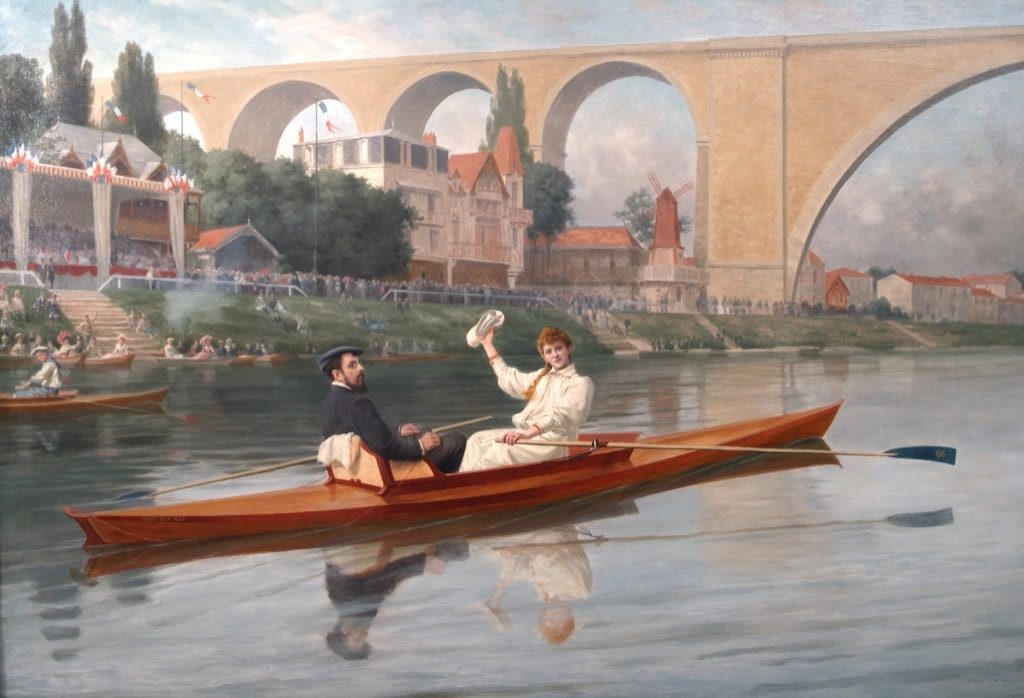 There is something magical about the two exhibitions taking place at Atelier Grognard, in Rueil Malmaison at the moment. The first one is dedicated to Parisian suburbs painted by Corot, Vlaminck, Marquet or Harpignies… in the 19 th century. The second one, a few hundred yards away, at Château de Malmaison, shows a collection of the Empress Joséphine’s fabulous court dresses and embroidered slippers and underwear. 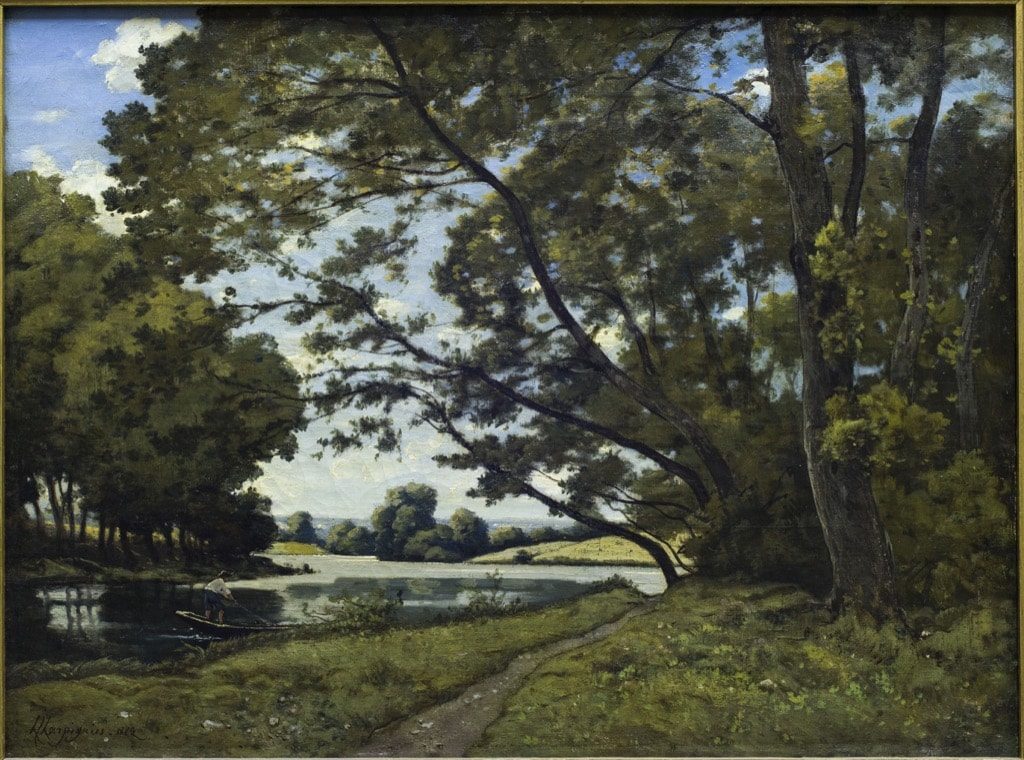 It was one of these freezing sunny January days and I felt exhilarated when I arrived in Rueil, a rich suburb west of Paris, to visit Atelier Grognard’s exhibition of suburban paintings. Fields, stone quarries and boating activities, take a large place in this show of 150 paintings and drawings by Marquet, Sisley, Daubigny, Gleizes, Jongkind… 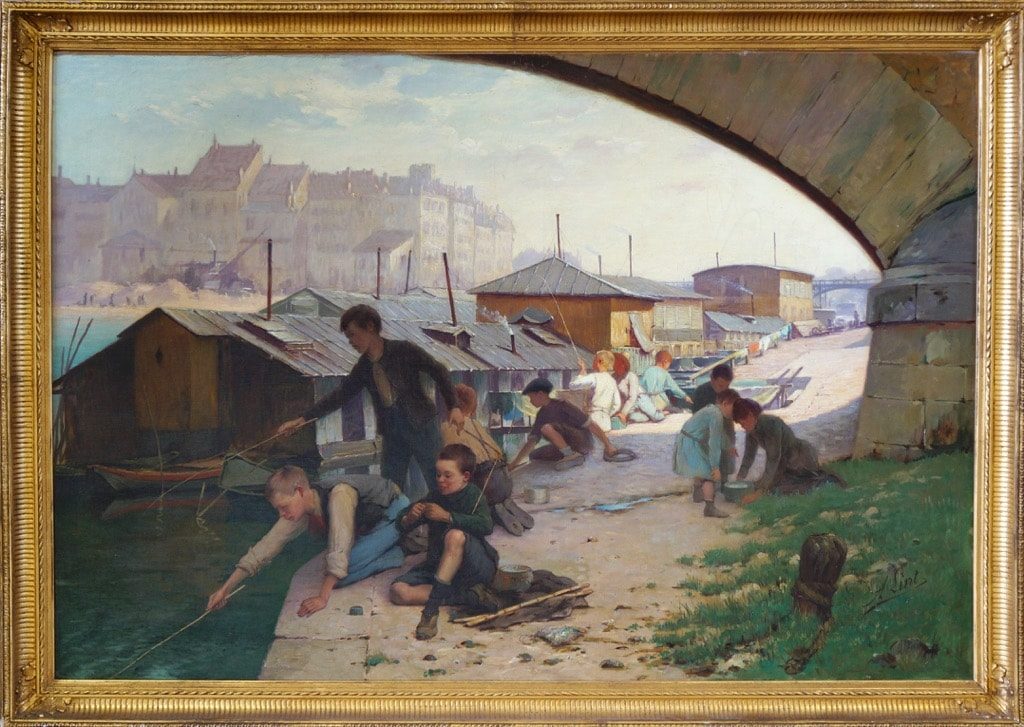 The lighting is too white and the hanging of the show a little disorganized, but the charm of these famous and obscure painters, who all went and spent weeks painting the suburban villages, lies in the authenticity of vanished popular scenes and landscapes. 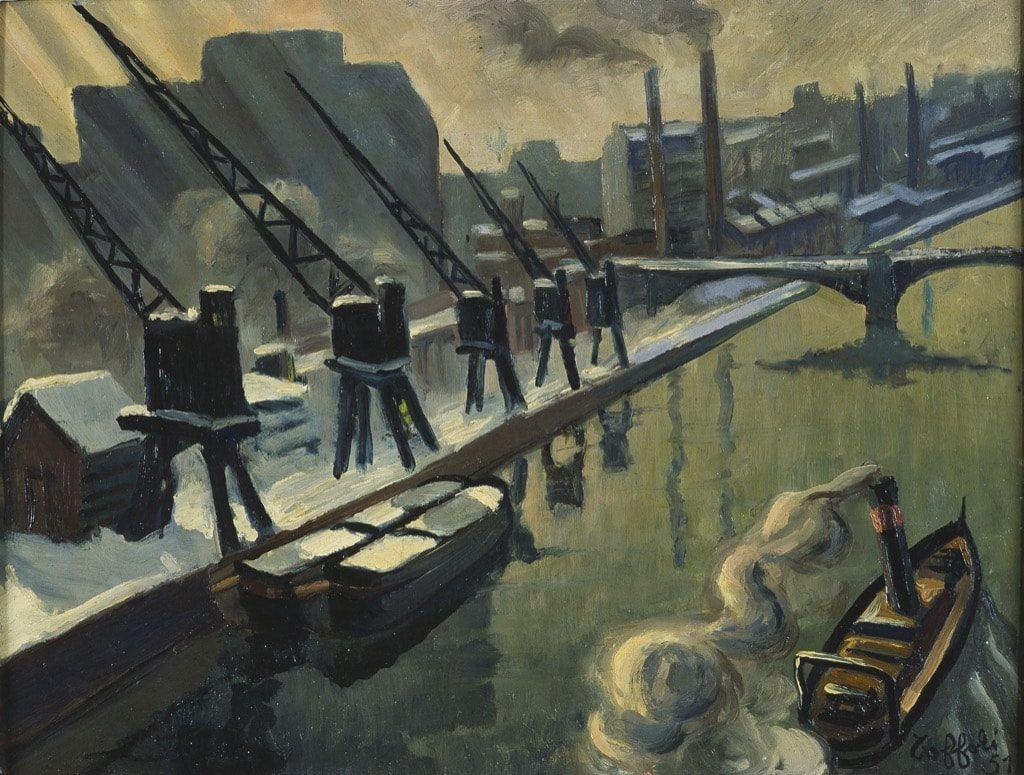 The emotion of seeing landscapes that have beeen permanently ruined by constructions and lack of proper urbanism is very strong. Part of these villages (Courbevoie, Nanterre) have become la Défense, the Parisian equivalent of Wall street, while other industrialised towns have retained a little bit of charm like Poissy or Pontoise. The geographic range of these paintings is of 50 kms around Paris. I particularly liked « Auteuil » by Carpeaux in 1869 which you can now reach on the subway, Corot’s views of the Seine, a portrait of painters in Vaux de Cernay by François Louis Français, St Cloud by Gauguin, and the train station in St Cloud as seen from Duchesse Pozzo di Borgo’s window, painted by Edouard Dantan in 1880. The large room showing boats of all kinds on ponds and rivers is particularly entertaining. (until April 10, Atelier Grognard) 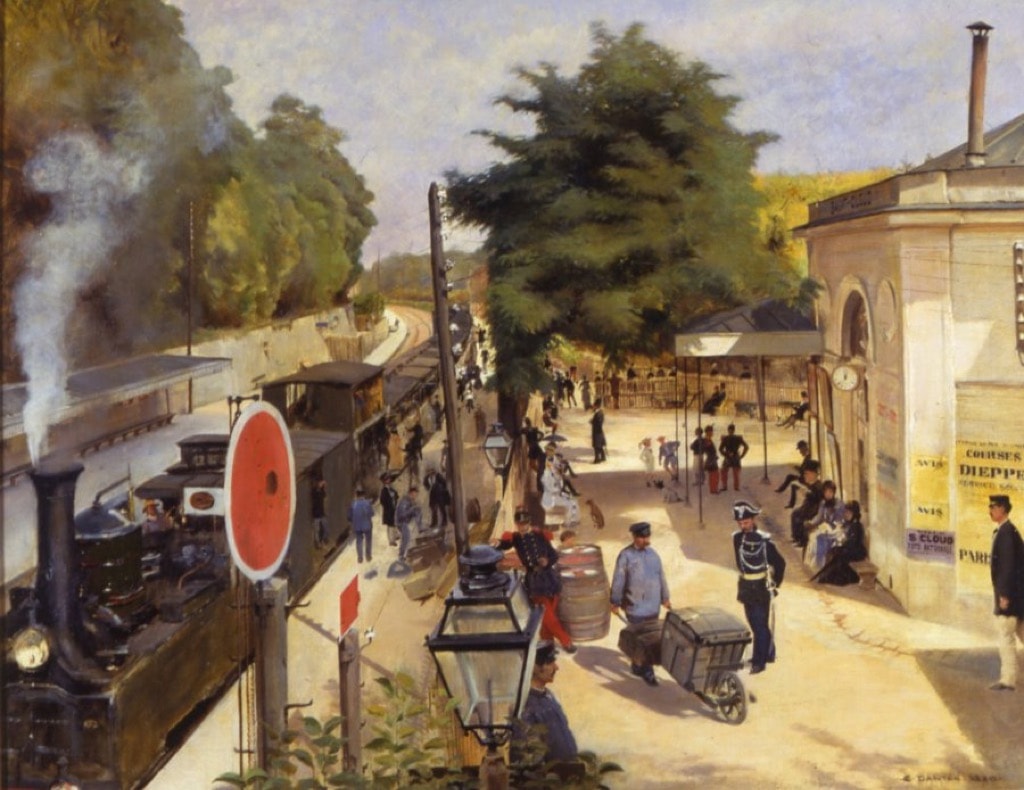 But nothing can rival the very special charm of the Malmaison, a large house a short walk away, which is impeccably kept and where the smell of fresh wax accompanies you up the wooden stairs. Once you have meandered across the numerous salons and bedrooms of Napoléon and his wife Joséphine, you arrive on the second floor in the temporary exhibition space. The staff is incredibly nice and there is a gentle atmosphere in the whole museum. In the summer, the rose garden is a delight. 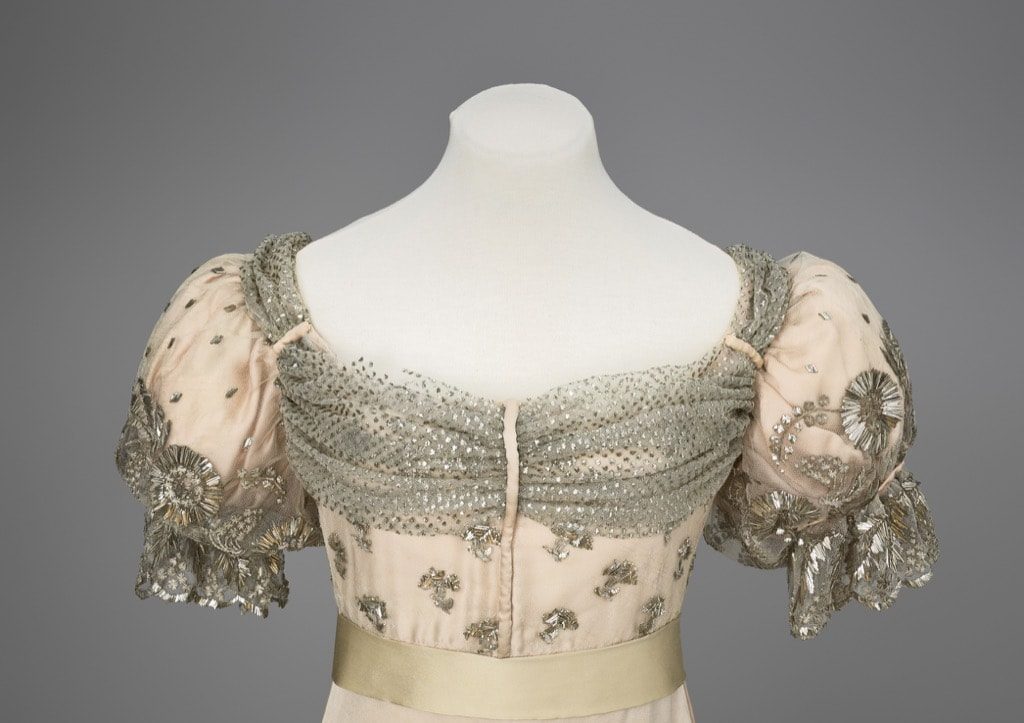 And there, the magic of precious stockings and embroidered underwear, of a piece of hair to wear on her forehead and ten court dresses and coats,  many shawls and shoes overwhelms you. The intimacy of the Empress’s closets, which contained as stated in the inventory, 230 dresses, 100 shawls, 369 pairs of stockings, 876 handkerchiefs…is unique.

It is one thing to see fashion pictures in a book and another altogether to see these historical pieces, worn two centuries ago, by the tragic heroin, which feed the imagination. Not only are they fabulous from a technical point of view but their lavishness makes one dream about other times. A series of photographs show how everything was minutiously restored by seamstresses and the amount of work and love put in the stitches is moving. 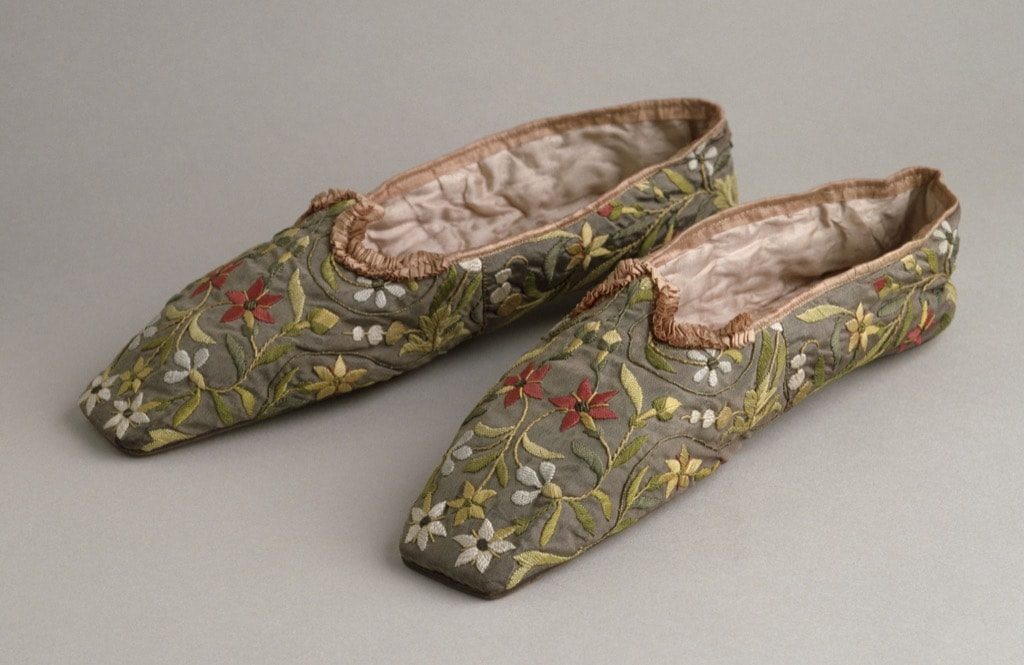 Do make the effort to drive twenty minutes from place de l’Etoile to the Malmaison on a sunny day, there is magic to this place. 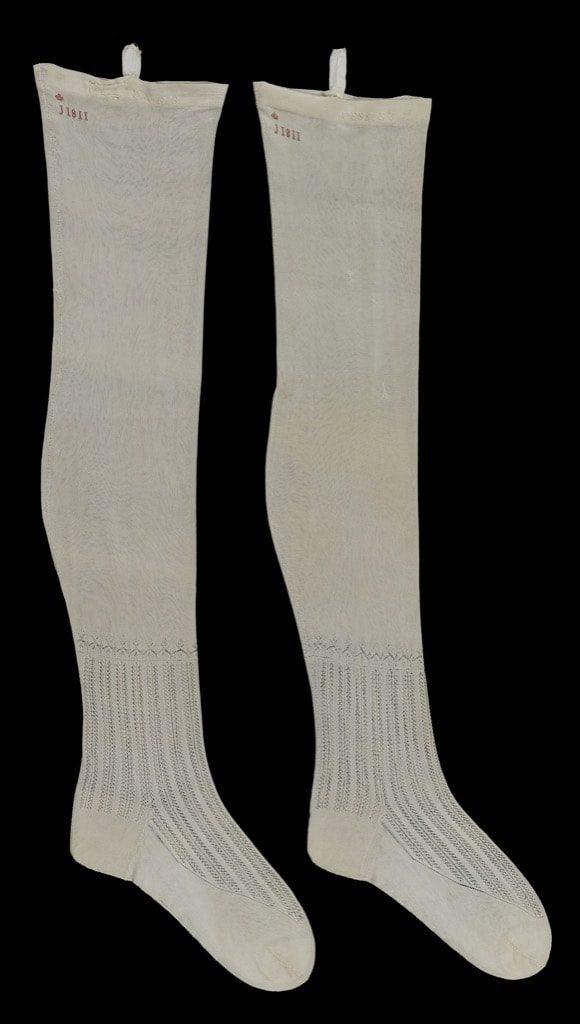