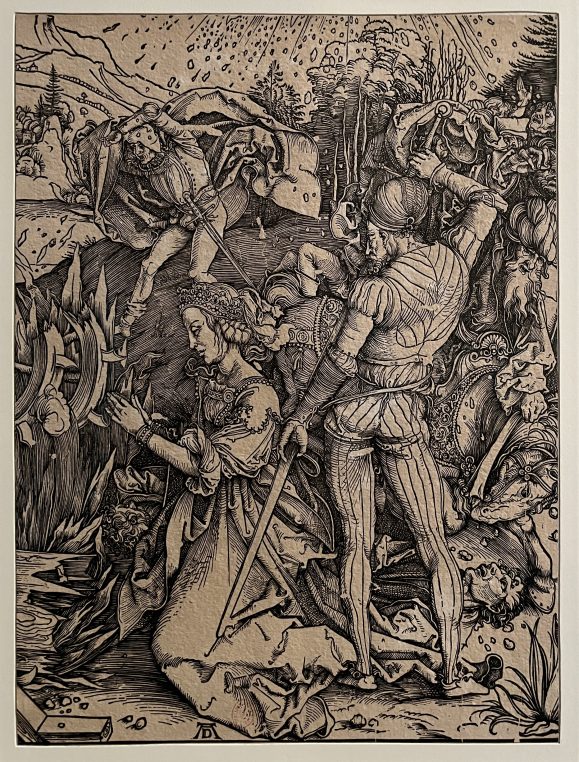 Last Sunday was festive: at 36, Rafael Nadal won Roland Garros for the 14 th time beating the Norwegian Casper Ruud 6/3, 6/3, 6/0, Prince Karim Aga Khan’s horse Vadeni, mounted by Christophe Soumillon, won for teh 9 ht time, the Jockey Club prize at Chantilly. And Yves Bienaimé, celebrated the forty years  of Musée vivant du Cheval which he created, with a magical dressage performance, surrounded by his two daughters Virginie and Sophie. He is 86 and rides every day. But the event of the spring is definitely the exhibition of Dürer, Prints and drawings, at the Jeu de Paume of the château. It is refined, well researched and of high quality. The day was definitely blessed at Chantilly. 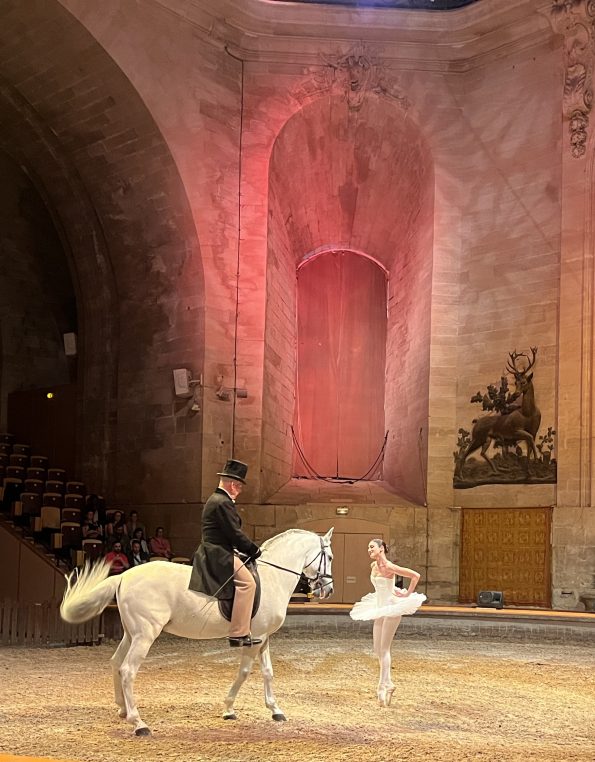 After it was announced that the Aga Khan’s horse had won on the racecourse, it was wonderful to celebrate another great benefactor of the famous stables built by the architect Aubert for the Prince de Condé in 1719. the largest in France after those of Versailles, these stables are famous for their grand architecture. Converted into a riding school after the war, where Colonel Jousseaume was teaching children (like me) it was rehabilitated in 1982 by Yves Bienaimé who literally saved them. After two years he created equestrian shows and started collecting precious items for the museum. When he met his Highness the Aga Khan, these two admirers of horses joined efforts to develop the place. It is now the center of numerous shows all year round and especially at Christmas, but also a great attraction for the city of Chantilly which has always like Ascot, been dedicated to horses.

What is fascinating in the Dürer (1471-1528) exhibition is the great research which went into finding how all the contemporaries influenced each other and how the original prints were copied by Dürer’s followers. The invention of woodblock print allowed artists to exchange their works and Mathieu Deldicque and Caroline Vrand from Bnf succeeded in giving us a lively and complete show of the German artists’ prolific work (over 300 wood block and cheaper plates). The exhibition highlights two of the most important public collections of France for Dürer’s works, the Musée Condé and the Bnf. In 1667, Colbert bought for Louis XIV th a collection of 80 000 sheets collected by Abbé of Villeloin, and these founded the royal library’s print room. Bibliothèque Nationale de France owns today a version of almost all of Dürer’s prints. Engraving on wood in relief and engraving in copper enabled thousands of prints to be made. Dürer started out copying Martin Schongauer‘s works and the head of an old man is an example of it.

After Jacopo de’ Barbari, View of Venice from bird’s flight, 1500

The exhibition is exceptionally pleasant to visit thanks to a clever mix of (Farrow & Ball’s) colors in the scenography, wooden panels showing original and inspired copies face to face. But also due to the choice of fabulous visuals such as Mantegna’s Bacchanale or the very sexy Centaur Nessus and Dejanira, by Dürer 1495. The four naked women (four sorcerers) from 1497 depict ladies with all their forms, and the rapt of Amymone is also very sensuous. The large view of Venice by Jacopo de’ Barbari is incredibly detailed and introduces the section where we learn about Dürer’s passion for the city. 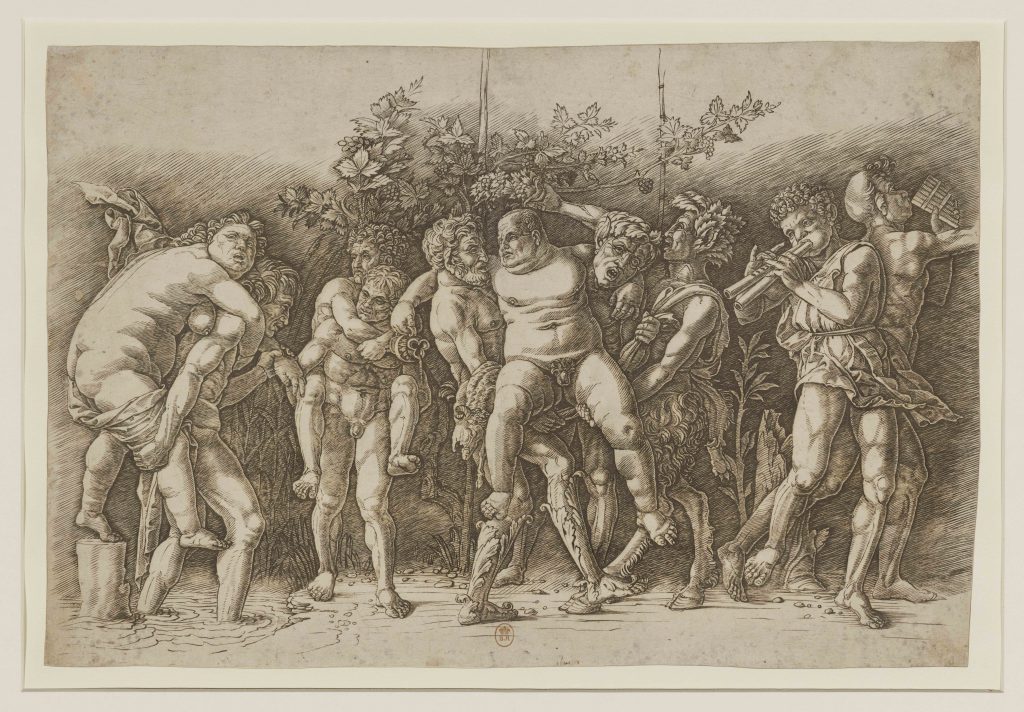 Dürer loved Venice and was inspired by Jacopo de’ Barbari but also by Raphaël and they often exchanged their works. He also knew Leonardo da Vinci’s prints and studied the anatomy of a horse like Leonardo. 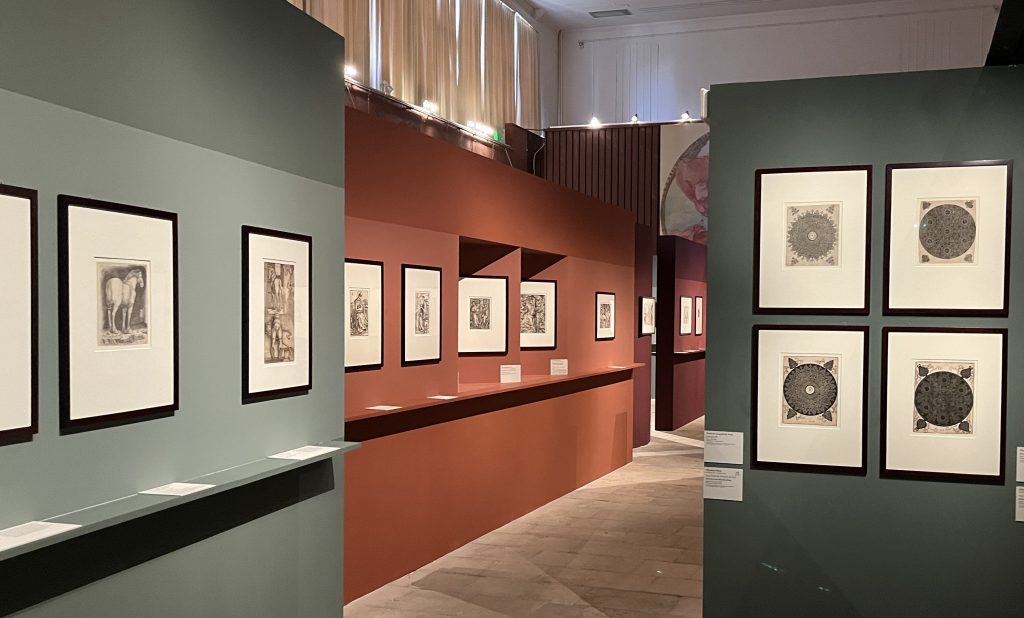 The design of the exhibition is extremely pretty with very readable cartels below the works and explanations in English and in French on the walls.

this is an exhibition not to be missed. On the second day, I ran into a lady who works at the Art Institute in Chicago, who had come especially to see the show and slept over in Chantilly. I spoke to the guard who after telling me he knew nothing about art, explained how he was fascinated by the description of evil and good in the prints. And I also spoke to the newcomer, the young curator Baptiste Roelly who started onJune 1 and is now deputy to Mathieu Deldicque.

Dürer,  prints and renaissance at Château de Chantilly until October 2.

4 Comments on “Dürer is celebrated in Chantilly and more…”