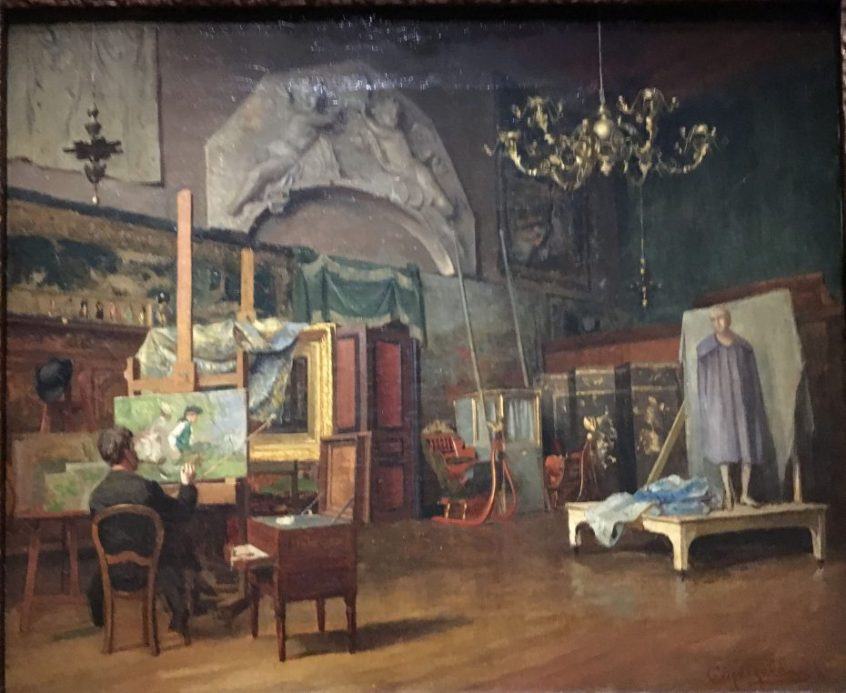 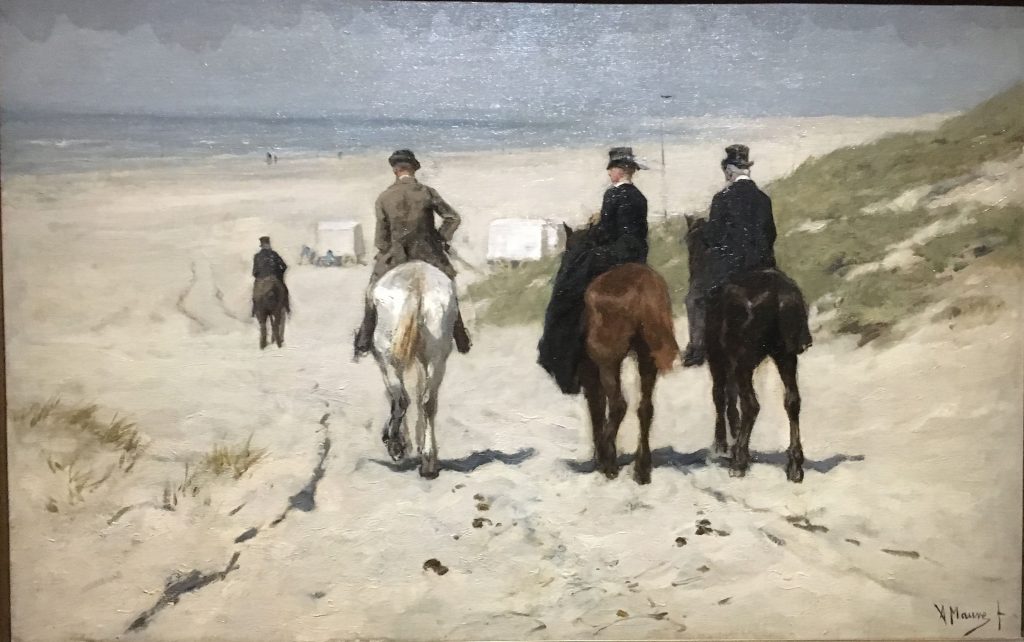 After the huge success of Swedish painter Anders Zorn‘s exhibition last fall, Petit Palais is astonishing us with a new show of “Dutch painters in Paris from 1789 to 1914”. From Frederik Kaemmerer to Piet Mondrian, we discover that Ary Scheffer was born in the Netherlands and we follow the artists in Barbizon (Jacob Maris), in Montmartre (Kees Van Dongen) and all around Paris. The show is superb with a great variety of themes and styles and an attractive scenography which unites the French and the Dutch painters. Do not miss it! 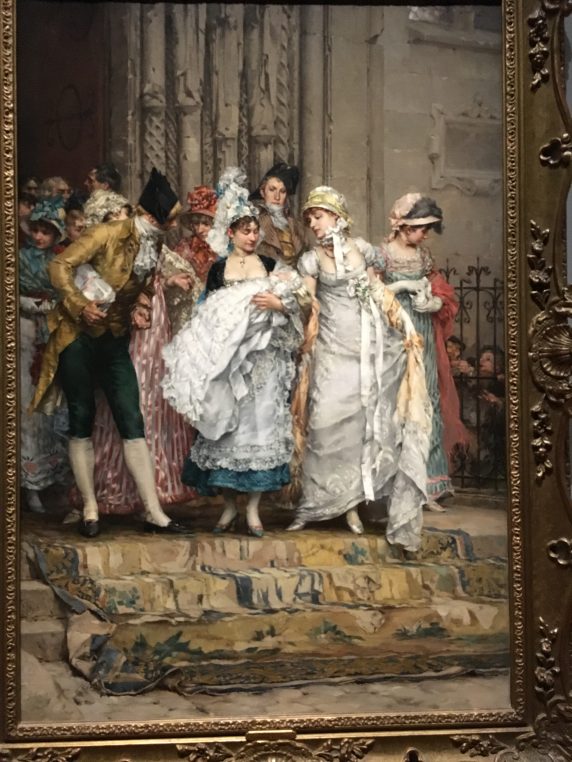 Frederik Hendrik Kaemmerer, “A christening under the Directoire”, 1878, Folkestone

As Mayken Jonkman, professor at the Netherlands Art institute, tells us in the catalog, Paris was the center of artistic life in the XIXth century and she found out that 1 136 Dutch artists had visited the French capital at the time. It took them five days to drive before the train started operating in 1835! Here the curators focused on seven major artists who had developed very special relationships with the Salon and the galleries of the time. 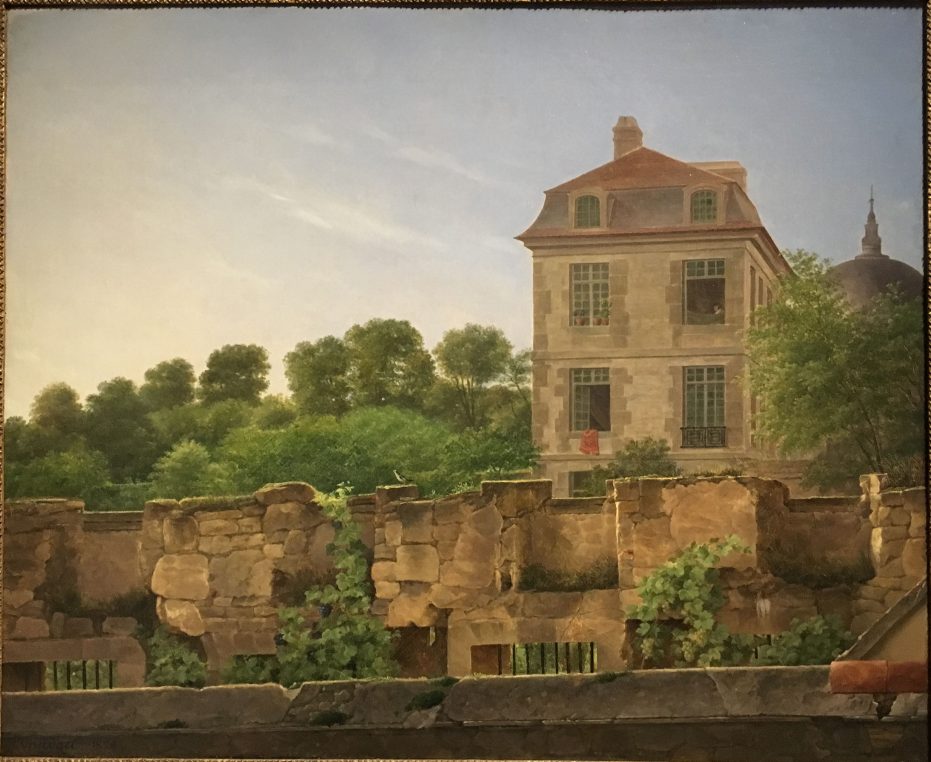 Jan Frans Van Dael, the house of the painter at the Sorbonne, 1828

The fact is that strong friendships immediately struck between all the artists and they kept on visiting each other in Paris and in Holland in the summer.  Gérard van Spaendonck, who drew flowers for Sèvres and was a painter at the court of Louis XVI befriended his student Redouté, who would become the greatest French flower painter. Between Ary Scheffer and Delacroix, Ingres and Vernet, constant relationships struck and they often came to his house on rue Chaptal (now the Musée de la Vie Romantique).

The very rue Chaptal, where the prolific dealer Goupil & Cie, very quickly adopted the Dutch painters. Vincent Van Gogh, the painter’s uncle, was his partner in Holland and this is how many of our protagonists ended up showing with him. They made sure to sell to American collectors who were also coming to Paris. 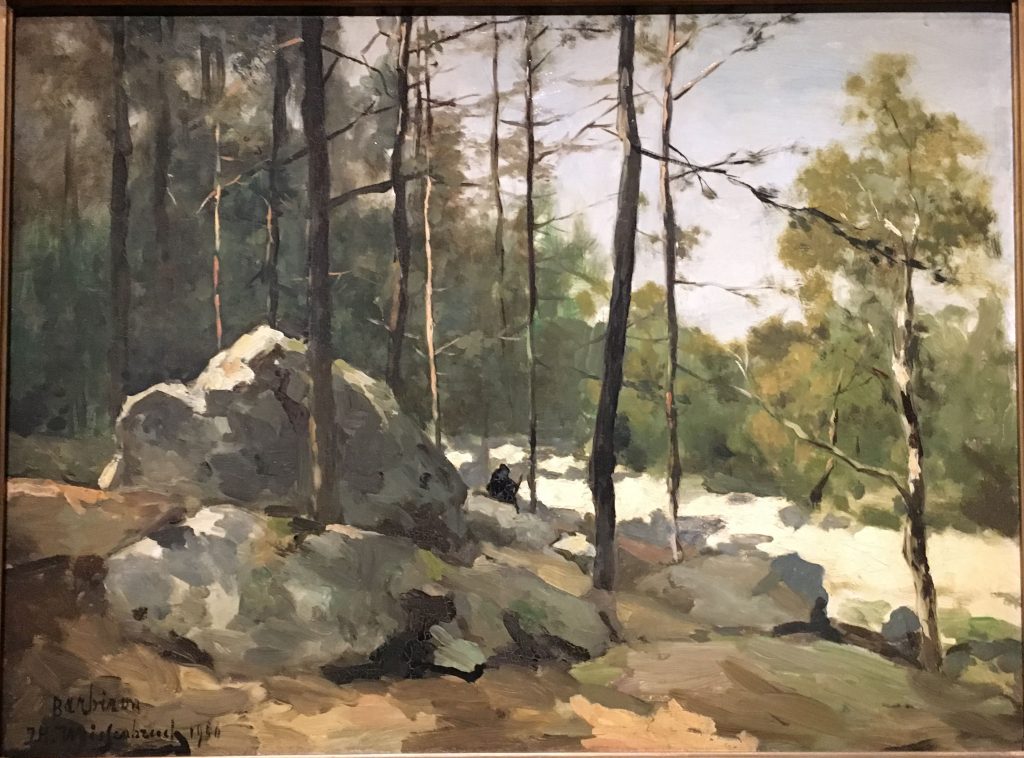 Johan Barthold Jongkind, probably the most well known of the group, concentrated on beautiful views of the Seine. He was friends with Courbet and Baudelaire and showed at Pierre-Firmin Martin, rue de Mogador, very near the opera and rue Laffitte, which was then the prestigious center of art galleries. 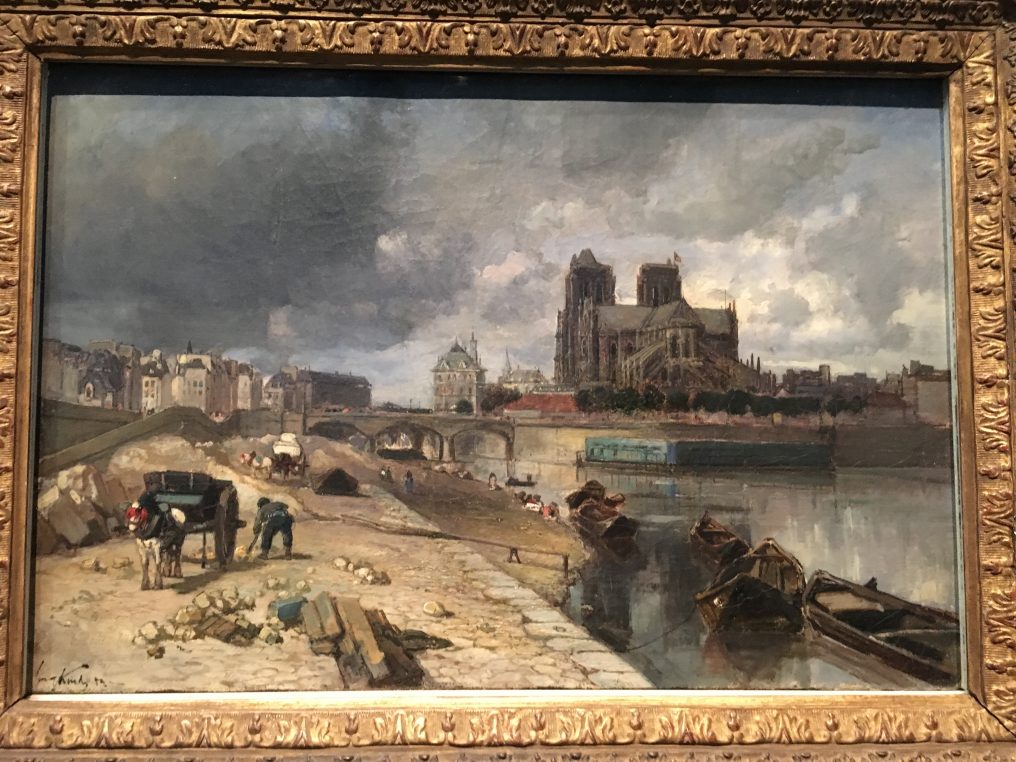 L’Ecole de Barbizon near Fontainebleau, where artists painted outside, attracted Jacob Maris and Joseph Israël who follow Daubigny and Millet in the painting of nature. But the absolute star of the time is Maris’ close friend Kaemmerer who arrives in Paris in 1865. He will stay there for the rest of his life. He studies with the French painter Gérôme, and specializes in depicting the life of rich bourgeois. In the summer, he returns to Holland and paints beach scenes near the Hague. 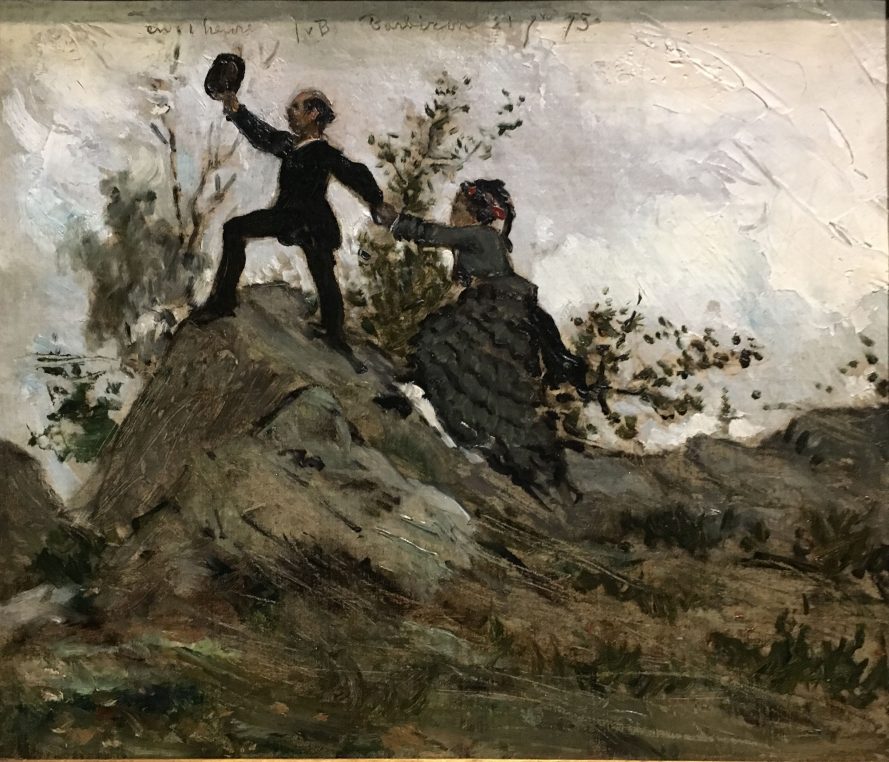 There is a beautiful room with seven Van Gogh lent by the Van Gogh Museum in Amsterdam. The head of exhibitions there, the very tall Edwin Becker is co curator of the show, and he was present at the opening,  describing the talents of each painter and the connections with the French art scene, of which Van Gogh is one of the strongest examples. 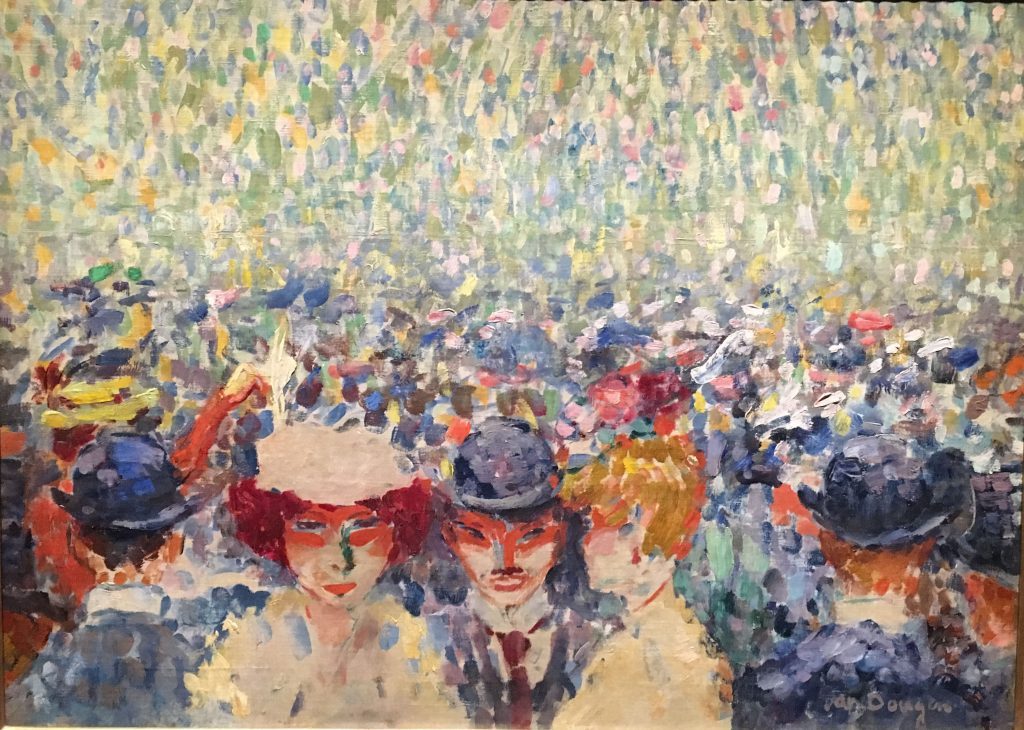 The two last rooms of the show are totally antagonistic and exciting: Kees Van Dongen delivers vivid pictures painted in Montmartre at balls and popular feasts. The works come mostly from private collections and are hanging on dark purple walls. 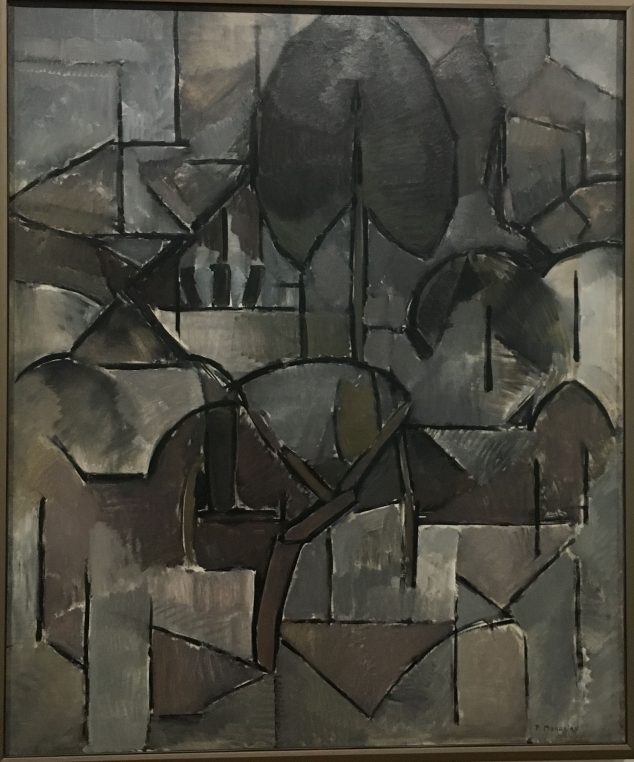 Piet Mondrian, “Landscape with trees”, 1912,  is one of the first works he painted in Paris

In the next room, which is painted completely white, Piet Mondrian is showing his mostly abstract works along Picasso’s “Le Sacré Coeur”. It is a wonderful closing for this exhibition of 19 th century artists.

The staging of the exhibition by Atelier Maciej Fiszer,  is extraordinary with a different color for every school of painters. There is anticipation and drama in the hanging and I must admit I never suspected Dutch painters to be so varied and excellent. And the excellent catalog with photographs and additional paintings is for sale at 30€! (Until May 13, Petit Palais)