The majestic XIV th century fireplaces of la Conciergerie, the prison where Marie Antoinette was kept prisoner during the Revolution, could not have been better adapted to show El Anatsui‘s metallic sculptures. The Ghanean artist who is present in all contemporary art fairs, uses discarded bottle tops and aluminum objects to create vast shiny curtains. I have always been fascinated by the poetry of his vernacular art. This monument located in Ile de la Cité next to the Court house has beautiful proportions and is managed by Centre des Monuments français, whose President Philippe Bélaval, has been confirmed for two more years. He is the man of the month in Paris with the opening of Hotel de La Marine on place de la Concorde, whose renovation he has driven for the last four years. And he is in charge of opening a Cité Internationale de la langue française in the château of Villers Cotterets, an hour North of Paris.  Valérie Senghor, the great niece of teh presidents of Senegal and poet Léopold Sédar Senghor,  is its director. 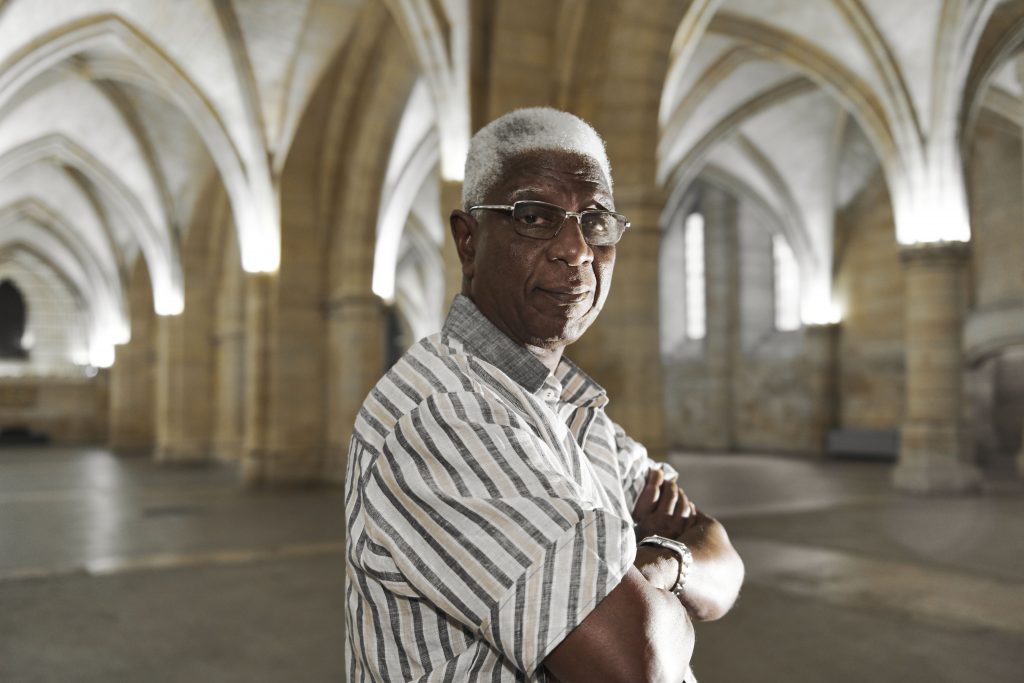 Born in 1944 in Anyako, in a family of 32 children of whom he is the youngest, El Anatsui has developed a body of poetic works made from bottle tops sourced from an alcohol recycling station. They are sewn together with copper wire. These curtains reflect the light beautifully and are completely supple and smooth. The huge gothic space of la Conciergerie, which was the first Parisian Home of French kings in the 14 th century, is a great frame for these monumental works which reflect the grandiose and the tragic of the monument’s history. He has been teaching art in Nsukka, Nigeria for the last forty five years.

The representation of water is a main element of the installation and it is pictured here by two “rivers” made of a video projection on light textile, a hint to the arms of the Seine surrounding the Ile de la Cité. Six metallic sculptures hang on the walls and in the monumental fireplaces. This easy access to art is a way to entice the public to come and visit these beautiful premises where the History of the Revolution is told in the back rooms.

This exhibition of one African artist in one monument is curated by N’Goné Fall (former editor in chief of La Revue Noire) in the Africa 2020 season. Dedicated to the 54 African States, this season was conceived by President Macron and is centered on the arts, sciences, technology and economy.

El Anatsui’s largest piece was a 15 m X 25 m metallic tapestry made for the Royal Academy in London in 2013. His works can be seen at the Metropolitan museum, MoMA, the Smithsonian National Museum of African art, the Guggenheim Abu Dhabi and Osaka Culture foundation. He is represented by Galerie RX in France. The exhibition is open everyday from 9.30 am to 6 pm until November 14, and you can also visit Sainte Chapelle with a twin ticket. 2 boulevard du Palais, Paris 1.