How much more romantic can a film get than when it mixes ballet at the top (with Hofesh Shechter), love  and food with great actors. “En Corps“, (In body) is the latest Klapisch film cowritten by Santiago Amigorena (who publishes “The Ghetto Within” in the US next September): it is fantastically well filmed by Alexis Kavyrchine and the music by Shechter is breathtaking. The story of a ballerina from the Paris Opera, Marion Barbeau, who after tearing a ligament in her right foot while dancing La Bayadère, sees a doctor who tells her that she will never dance again. At a complete loss, she decides to help a friend who cooks from a food truck. She finds love and Shechter who hires her in his new ballet to be performed at La Grande Halle de la Villette in Paris. All ends well and we laugh a lot on the way…

Hofesh Schechter has just been performing at the Paris Opera and is staring for a fortnight at Théâtre des Abbesses with his company. He is one of the most sought after Israeli/British choreographer and acts his own part in the film. He has known Cedric Klapisch for a long time since the director has been filming ballet for forty years. Marion Barbeau, a top classical ballerina and first dancer at the Paris ballet, is also a subtle and pretty actress. She catches her boyfriend kissing another dancer behind the stage at the theatre, and soon after makes a treacherous fall on stage. She is only 26 and her life seems to have come to a halt. She has been dancing since she was a little girl, following in her (dead) mother’s and grand mother’s steps. Her father, brilliantly played by Denis Podalydès, drives her miles away from home to her ballet lessons until she integrates the Paris Opera ballet school.

There is a lot of sense of humor in the script with her chiropractor, François Civil (recently seen in Bac Nord), falling in love with her, and her best friend, a former ballerina, continuously fighting with her sexy boyfriend, the cook. The film is very sensuous with just enough ballet scenes and the sexiness of Schechter’s dancing couples. Muriel Robin, who plays an aging host to music and ballet companies in residence in Southern Brittany, has one of her best parts and tries to inflict some philosophy into the young ballerina’s mind. What does one do when one’s whole life so far has been dedicated to ballet?

Her love affair with one of the hip-hop dancers, Mehdi, is charming and gives her a new beginning in life: she trades classical ballet with “pointes”, with modern ballet, barefoot. The film is a lovely lesson, where the most important thing in life is to learn how to bounce back. Her indifferent father even understands at the end that she was right not to become a lawyer like him, and to pursue her talented artistic career. Fromhaving worked with Philippe Decouflé, Aurélie Dupont, and having filmed unemployed dancers during lockdown, Cedric Klapisch, author of “L’Auberge Espagnole” has made a masterwork. And a very enjoyable one too! 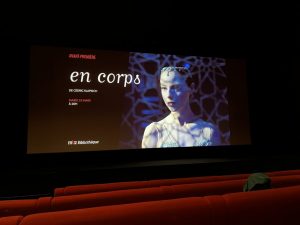 The film “En Corps” which I saw at MK2 Bibliothèque, in a huge and luxurious theater, is playing everywhere in Paris.