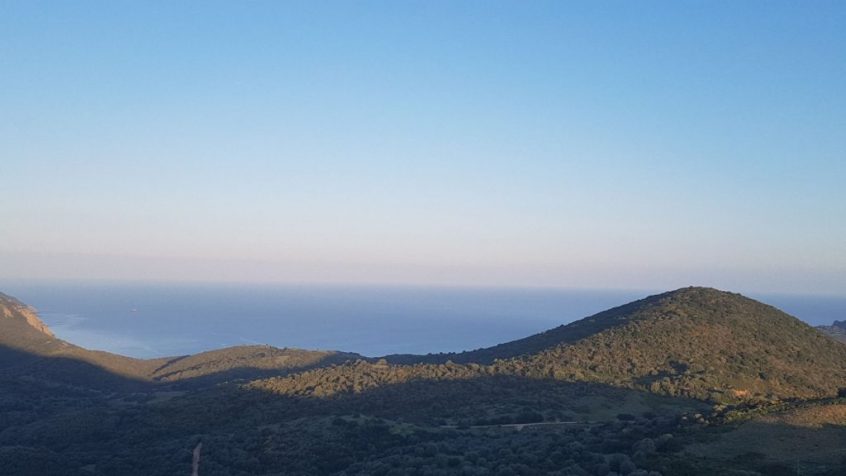 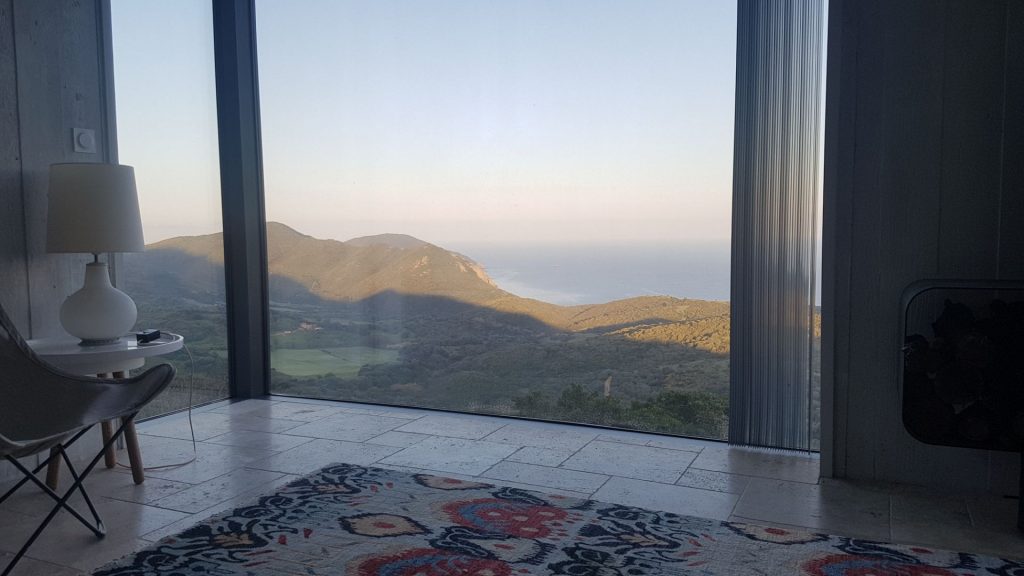 A view of the sea from one’s room in Corsica

I had my ticket to fly to Corsica and was so excited to see spring in this part of the country, which is always too hot in the summer for excursions and climbing. So, after we were locked down again in Paris,  my host sent me these tempting pictures from his house perched on a mountain near Ajaccio which can be rented by friends. A new project for the summer… Instead, stuck in Paris, I went for a walk in Parc de Bagatelle, a less exciting adventure but a visually beautiful experience. And friends are sending pictures from Edinburgh where rhododendrons are already in full bloom and from the Tuileries gardens where goats are used to mow the moats… We are back in Medieval Paris. 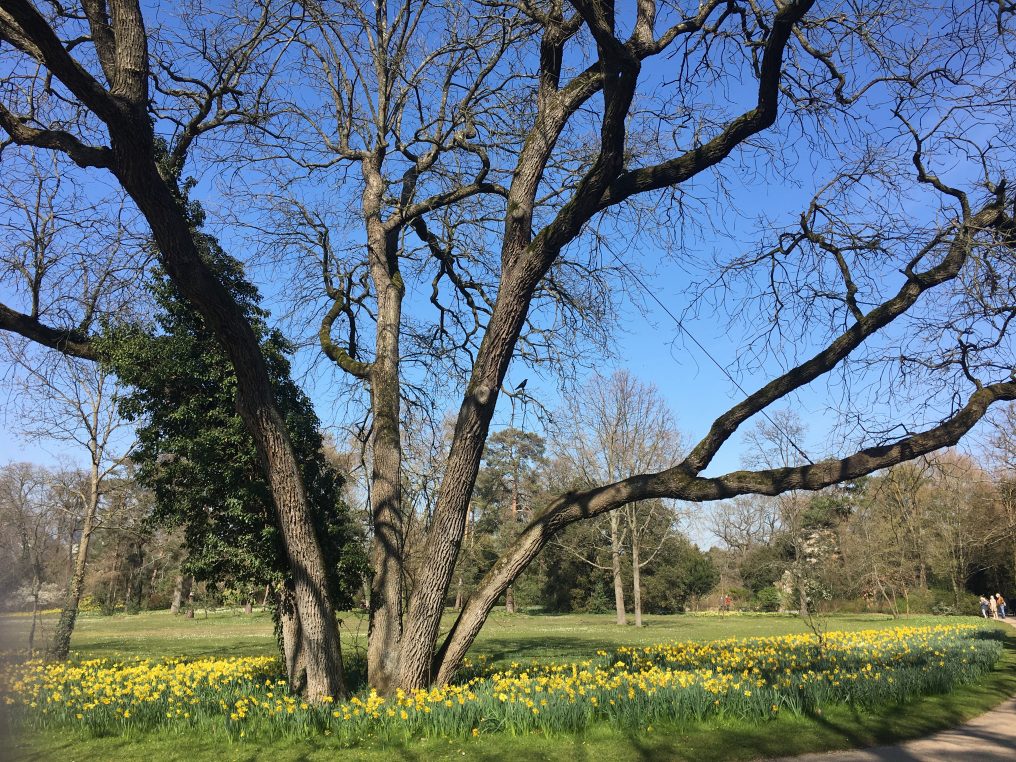 In Bagatelle, historical trees are surrounded by daffodils and hyacinths

When the furniture and artworks from Jardin de Bagatelle were sold in 1906, Viscount Astor bought the Chinese Pagoda for Cliveden and it  had to be reconstructed for the pretty park located in the Bois de Boulogne which is a favorite destination  for spring walks and rose lovers in June. Its “roseraies” (there are 1 200 species in the rose garden) are famous around the world and its Prizes also. Botanists from around the world travel to be on the jury. There is an iris garden which will soon be in bloom and a good collection of clematis. 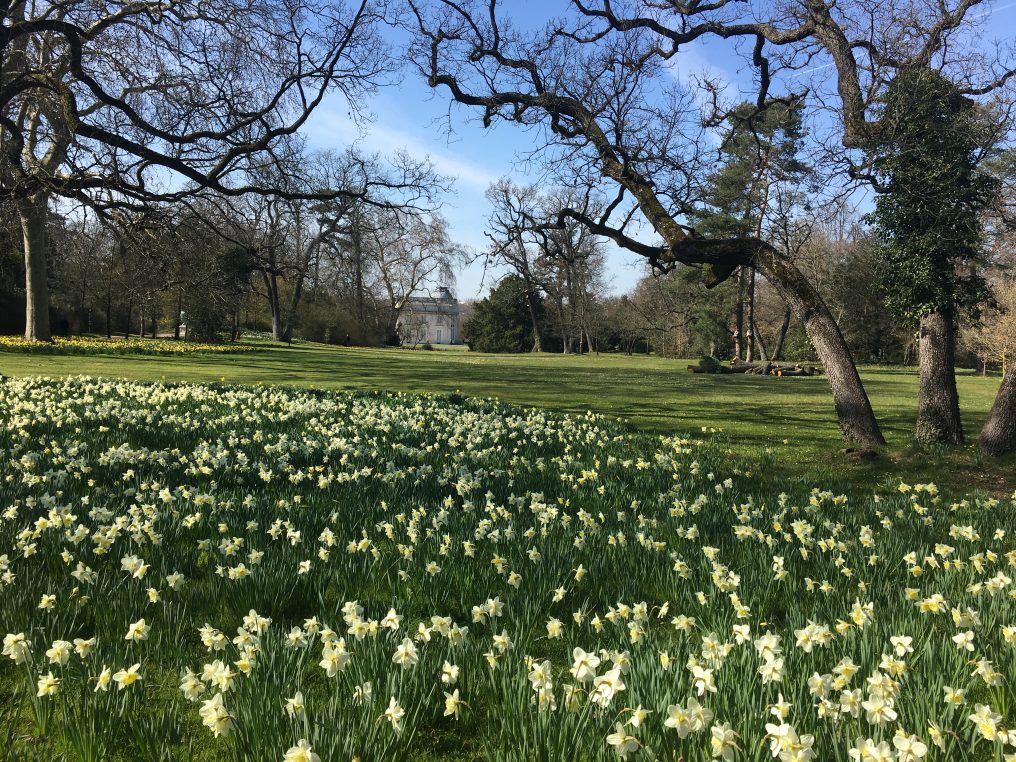 There are a few buildings in the park, a Trianon and an Orangerie which is used for concerts

The property used to belong to Comte d’Artois in 1775, and he asked gardner François-Joseph Belanger to transform this piece of land in an English garden, it was done in 64 days. The Orangerie was built later in 1865 (there are concerts regularly organized there) at the same time as the stables which serve as a restaurant in normal times. The famous rose garden was conceived by Jean-Claude-Nicolas Forestier in 1907, who led the fund raising campaign for it. This Polytechnicien, who worked for the city of Paris, created the cycling alleys in Bois de Vincennes and the gardens of avenue de Breteuil in Paris. He was both an urbanist and a trained forester and worked in Sevilla, Spain, in Morocco, and on projects for Buenos Aires and Havana from 1923 to 1930. 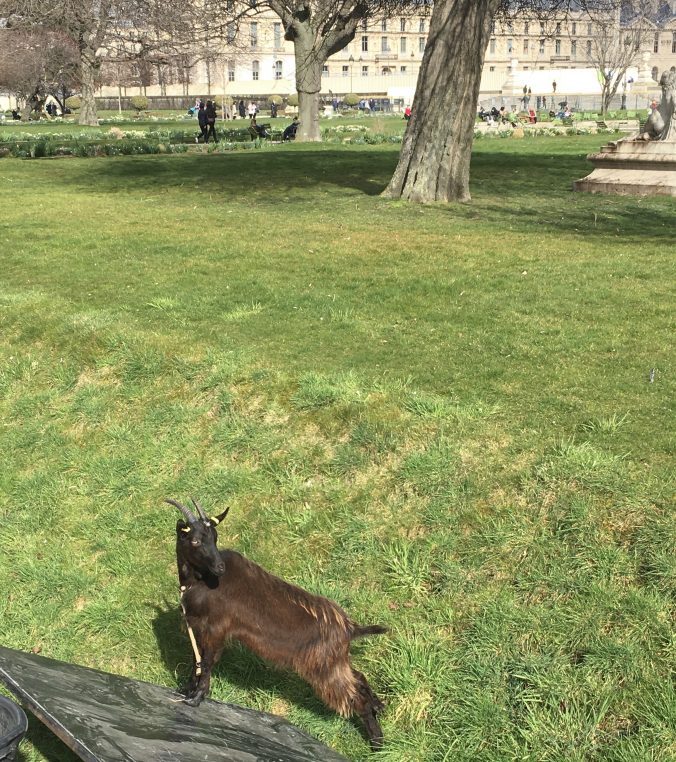 In the Tuileries gardens goats are used to mow the moats

Another afternoon walk was a visit to Galignani‘s bookshop to look at all the catalogs of exhibitions which could not open and then across the street in the Tuileries gardens where I ran into a few ducks and a couple of lady goats who are provided to mow the abrupt moats near the Carrousel. Very entertaining. A friend went back every day and noticed that the goats now had a little house. I ended this perfect afternoon with a tarte au citron from Sébastien Gaudard  on rue des Pyramides. I have to admit that they are unrivaled.

A friend from Scotland, who was jealous that auction houses should still be opened in Paris, sent this amazing picture of rhododendrons in full bloom in Edimburgh’s botanical garden. They are so early and perfect! 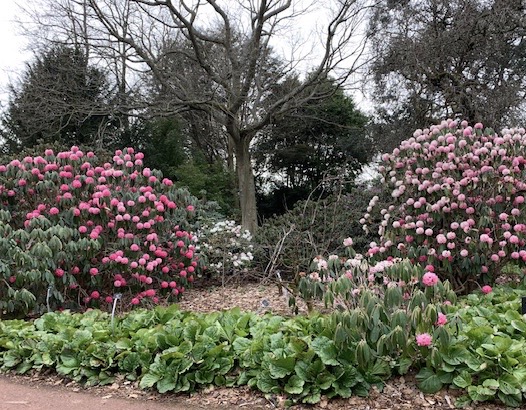 The Botanical gardens in Edinburgh where rhododendrons are already in full bloom! photo Theodora Zemek

Another excursion if you are not near Scotland is to visit the gardens of Domaine de Courances near Fontainebleau. This magnificent 75 ha park designed in the 16 th and 17 th century is still privately owned by the Ganay family, who transformed it with Achille Duchêne in 1870, and they developed multiple activities through their vegetable garden and chef Camille Bloesch who gives recipes (this month for blettes/chardes) in their newsletter. A shop, la boutique des jardins, (open Friday 4 to 7 pm and 10 am to 1.30 pm on week ends), sells vegetable and goat cheese and you can learn to sculpt wood with Julien Colboc who also has workshops for children. 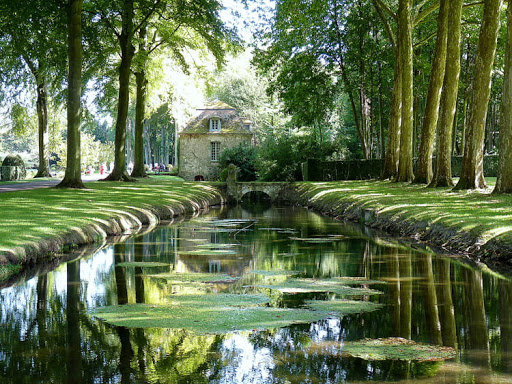 The gardens of Courances are open and beautiful near Fontainebleau

In Paris, many gardens are beautiful at the moment including Parc Monceau, Parc de Belleville and Buttes Chaumont in the North. You can find all infos on Parcs de Paris. And if you are a golfer, the attraction of the week is to go and test the putting green at Golf de Paris Longchamp which has reproduced the same speed as those in Augusta for the Masters. Since it is located less that ten kilometers from Paris, it will be the center of attention this week for all golf lovers.