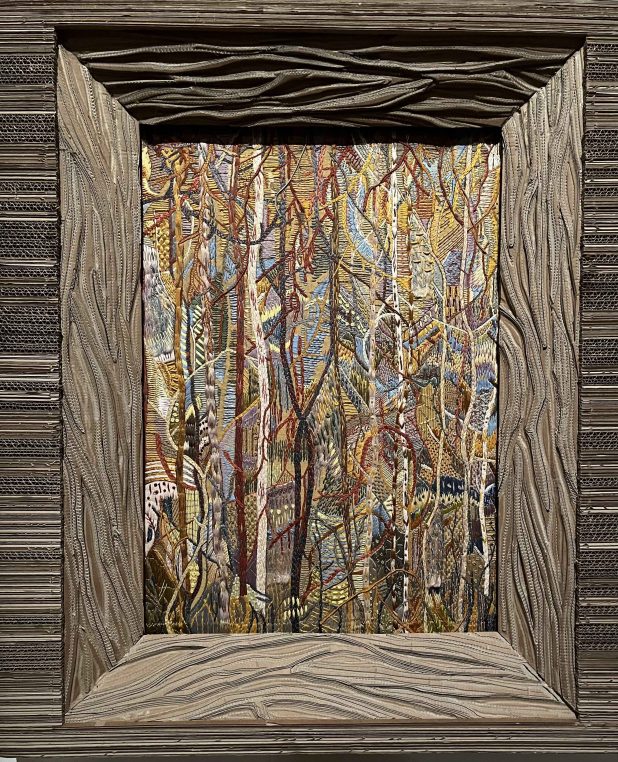 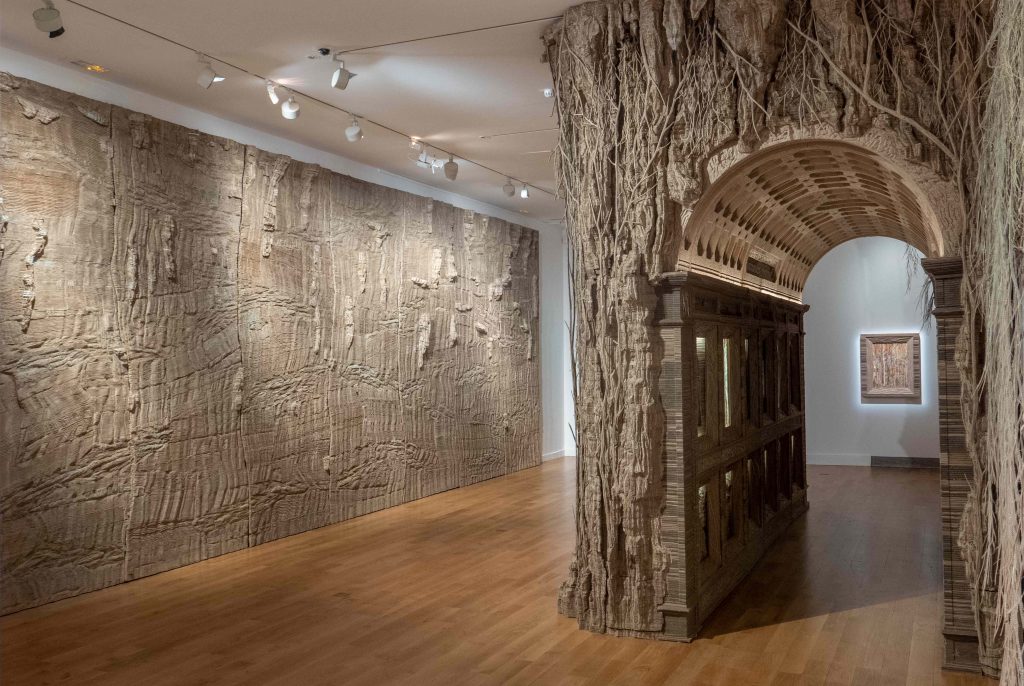 In the Galleria, Eva Jospin fills the space with a large mural and a tunnel full of surprises at Musée de la Chasse

Musée de la Chasse has been closed for renovations for two years, its fabulous director Claude d’Anthenaise has retired,  and Eva Jospin’s exhibit throughout the museum and in the Galleria downstairs is the perfect momentum for its reopening. Children and parents are forming a huge crowd outside and inside the Hotel de Mongelas in the Marais, and I found it difficult to figure out the story behind the artist’s precious cardboard sculptures. There are no cartels and no explanations.  But from having seen a few of her exhibitions at Galerie Tarasieve nearby, and more recently at Giverny’s  Museum of Impressionisms (until January 16), I just let myself be carried around with the crowds and enjoyed her new works immensely. You have time to see the show in Paris until March 20 th. 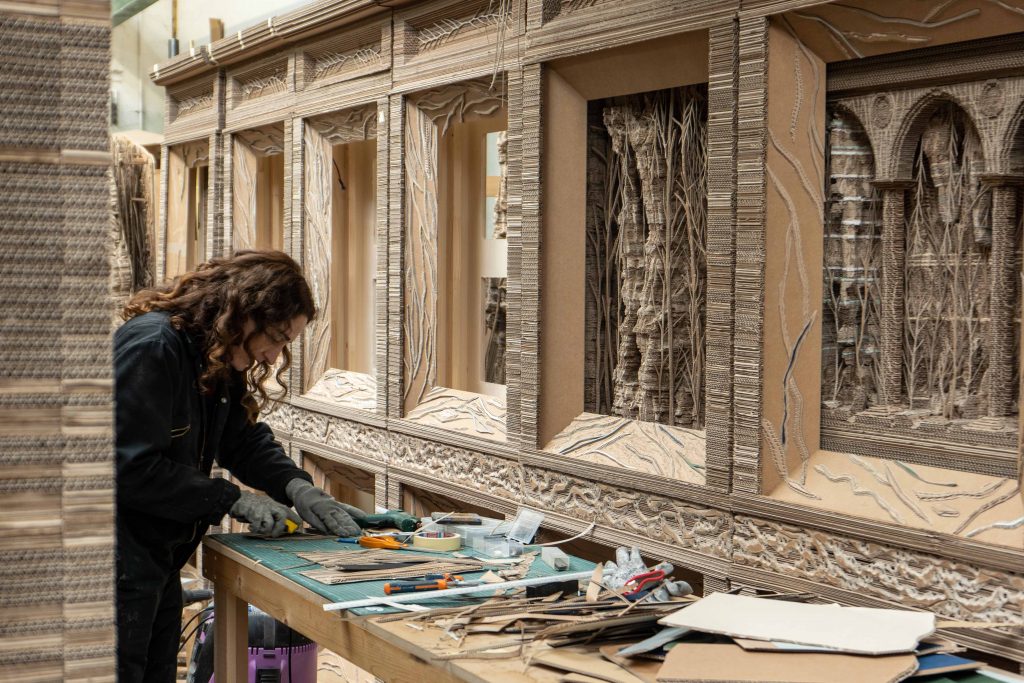 Eva Jospin at work in her studio

Claude d’Anthenaise was the first museum curator to buy one of her cardboard forests ten years ago for Musée de la Chasse et de la Nature. This time, the artist was given complete freedom and she shows large sculptures inspired by Rome, baroque grottos, a pergola and cenotaph in the 18th century drawings rooms. It is very dramatic even with little kids running around. You can go up to the attic where new rooms have been opened, and find a vegetal garland on a an iron gate similar to the one which now marks the entrance of the museum of Impressionisms in Giverny.

In the upstairs rooms, she has chosen to hang one of her early forests from 2009, next to a painting by Ferdinand von Rayski, “Hunters at rest in the forest of Wermsdorf”, 1859, and another by Philippe Cognée, “Landscape seen from the train”, 2020. The effect is spectacular on the wooden floors and wooden pannelings. How does the artist renew her style while always using cardboard, is a mystery to me? Since her first large exhibition of a “Panorama” in 2016, in the Cour Carrée du Louvre where she occupied a whole pavilion, I have been marveling at her art.

Here in the midst of the very precious 18th century decors created by the former director, the modern-classicism of her style appears fully. Far from the cheap decors for the Dior boutiques last summer, she comes out as a brilliant artist-craftsman and it was interesting to listen to some of the guards who very patiently explained to the public how she worked. One could see they loved the show they were supervising. Far from being old fashion, Musée de la Chasse proves once again that Nature can be defined in many ways including contemporary ones. Some of the embroidered works are treated like paintings, others as lace, like this liana hanging from a balcony in the Galleria.

In the universe she creates, Eva Jospin includes forests and antique constructions, which made me think of Angkor Wat in their interconnexions. Her inspiration is completely occidental but the intensity of her accumulation, the modesty of her medium, the richness of her imagination are overwhelming like a tropical forest. Once again, seeing the works through a child’s eye was enlightening.

In Giverny, her large forest occupies the whole room of Musée des Impressionismes.

The rooms at Musée des Impressionnismes in Giverny are large and very empty compared to Musée de la Chasse’. In the first space, the large embroidery “Silk Room”, designed at Villa Medici in 2016-2017,  and made in India, was inspired by the Nabis and the painter Edouard Vuillard. It faces smaller grotto sculptures from the artists’s collection. There are both photographs of her studio and drawings, in ink and pencil featuring a fountain, a relief, a forest. They hang on the walls and give the measure of the work involved in each construction. Facing and dialoguing with her works are magical paintings by  Maurice Denis, Gustave Caillebotte, Claude Monet. 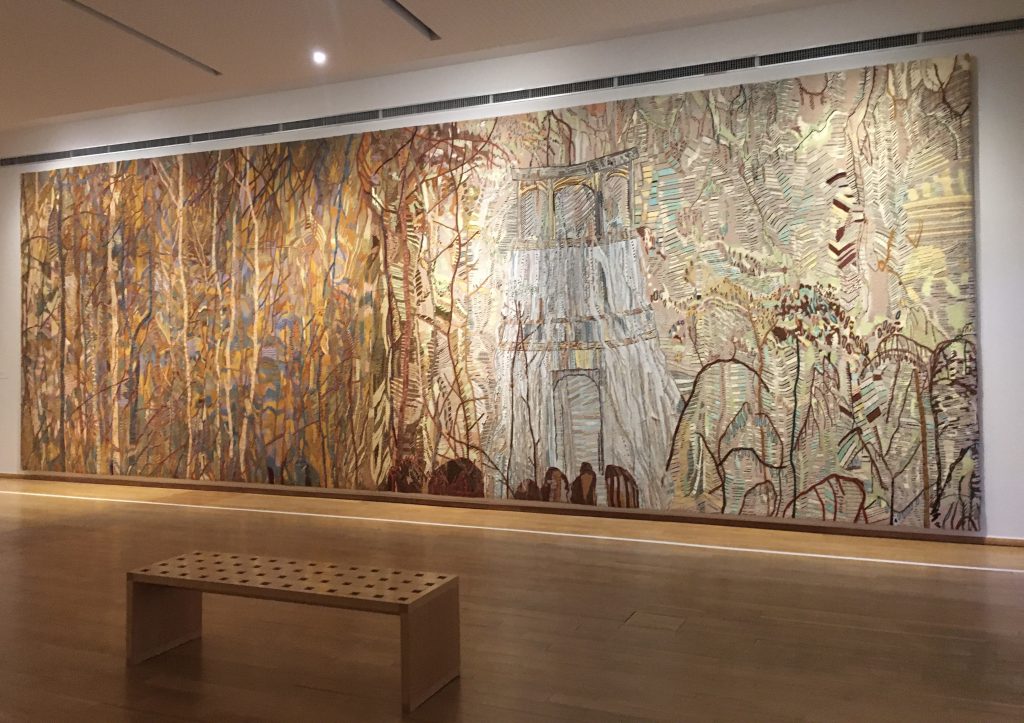 This large tapestry, “The silk Room” was conceived in Rome and embroidered in India

The immensity of the space and the calm of the Norman surroundings pay justice to this unique artist who is well served with these two exhibitions. Do not miss them.