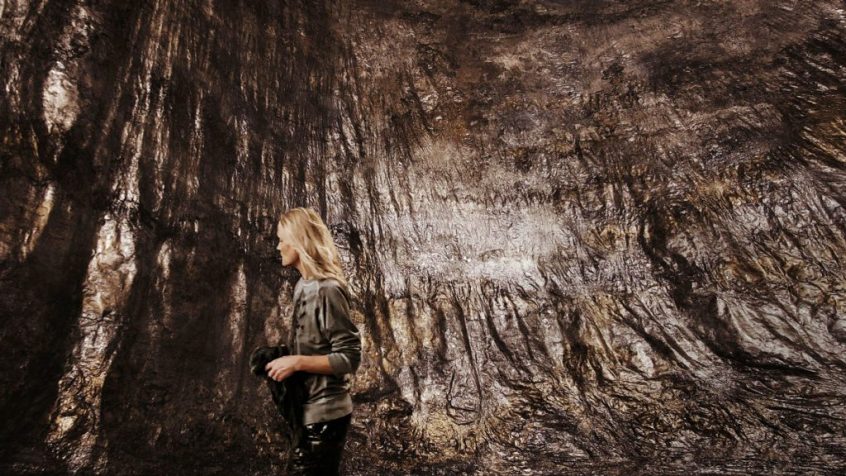 Galerie Jeanne Bucher has accustomed us to very high quality exhibitions. German artist Evi Keller, who lives part of the year in Paris but was born in Bad Kissingen, a thermal town of Bavaria, is showing very rare “Stèles” (stelae) which could pass for stained glass but are really made of very fine carbon based films painted with pigment and varnish. This artist (b.1968) who was first trained as a photographer in Munich, uses light and its reflections to illustrate her inner self. The result is very striking and both dark and luminous. A 19 mn video filmed by her gives a good idea of her somber but enchanted world, inspired by the rivers and forests of her childhood. 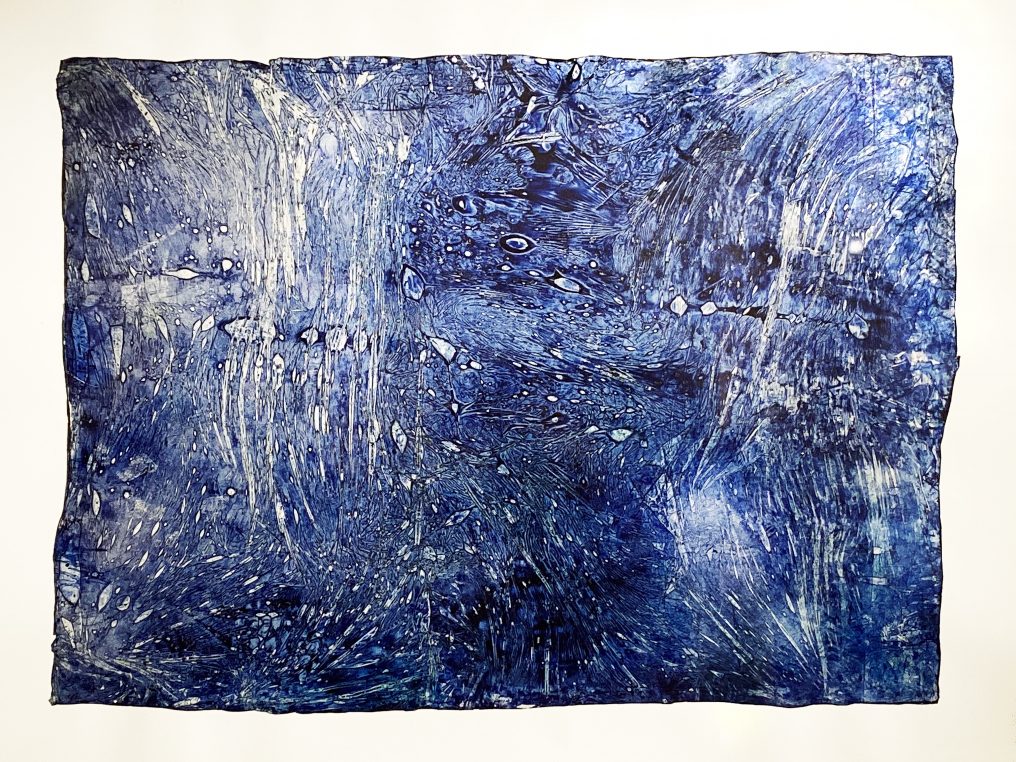 When they met her at Eglise Saint Etienne du Mont in 2014 during one of Paris’s “Nuit Blanche” or white night, the owners of the Jeanne Bucher Jaeger gallery immediately decided to organise a large show for the following year. Evi Keller has a very strong presence, an inner substance as she mentions in the film, and her art is to transform nature through light and its reflections. I particularly loved a large early photograph in the upper room of the gallery which plays with beams of light, and a blue stela which reminded me of a nocturnal painting, “Nuit  étoilée” by Van Gogh. 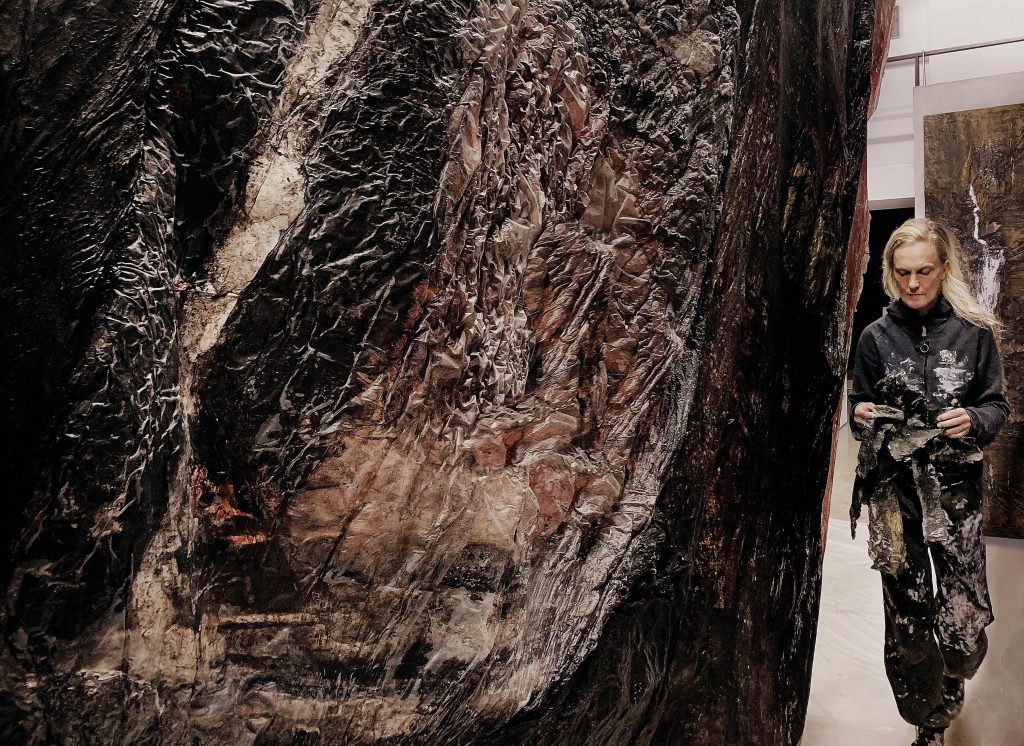 When she was 21, Evi Keller fell very ill and could not be cured by traditional medicine. She went up to the mountains and met a couple of anthroposophical doctors who cured her. This mystical experience changed her vision of life forever. This is when she moved to Paris where she started working in advertising. She then filmed bodies and dancers with “Mirror-Space”.  Slowly she moved towards “Matière-Lumière” (light-matter), working on the fluidity of transformation. She photographed frozen lakes and the transition between liquid and iced water with the reflection of light on it. 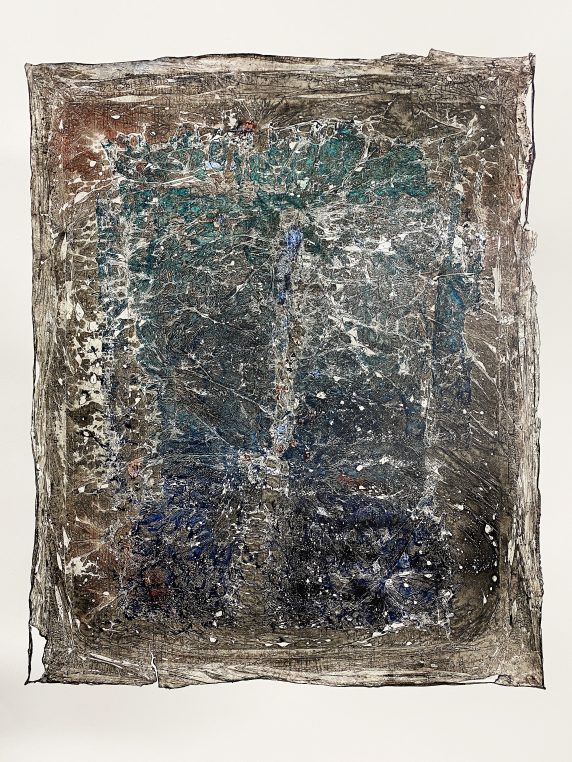 The gallery with its beautiful glass roof is suddenly inhabited by twenty stelae, transparent screens with a juxtapositions of painted films. They float like stalagmites and are both a refraction and a reflection of light. After working on cristal, glass, mirror, plexiglass, stone, wood and metal, Evi Keller now uses carbon derived transparent films which replace plastic and are completely organic. They allow her to play with the light and this is particularly striking when the large pieces of cloth hang outside in the forest or in a church like it did at Saint Eustache in 2019. 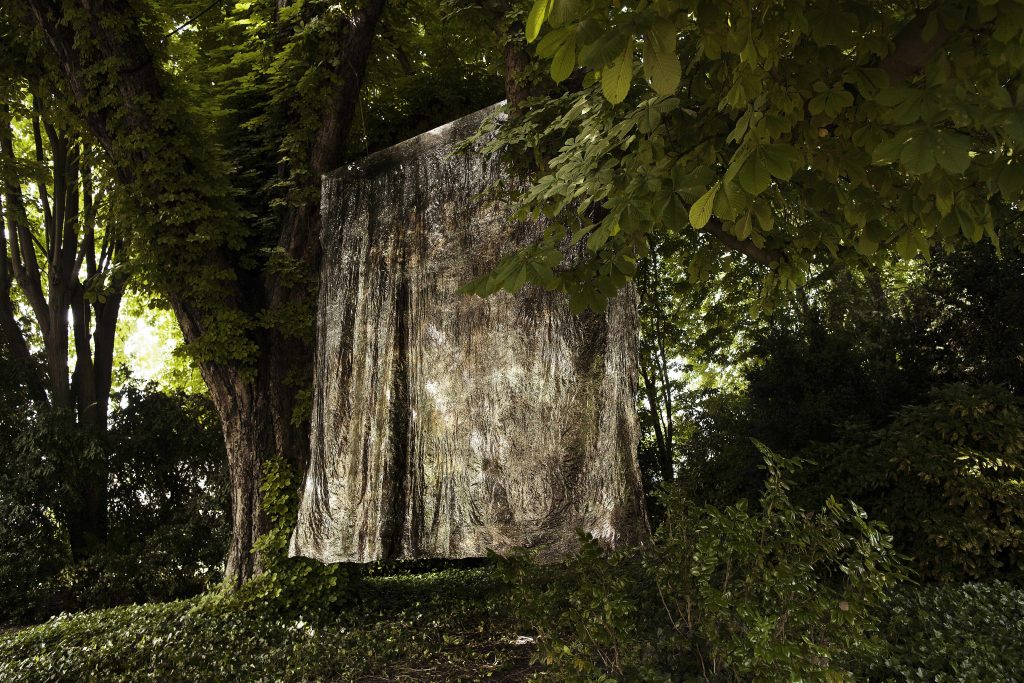 Behind her elf looking silhouette, one feels that Evi Keller hides deep secrets. She mentions her near death experience and her renaissance (rebirth) thanks to her creativity and her encounter with light. Her film makes us penetrate a cave of darkness with just enough rays of light to give us hope. The stelae inhabit the large gallery with pride and lighting makes them gleam.