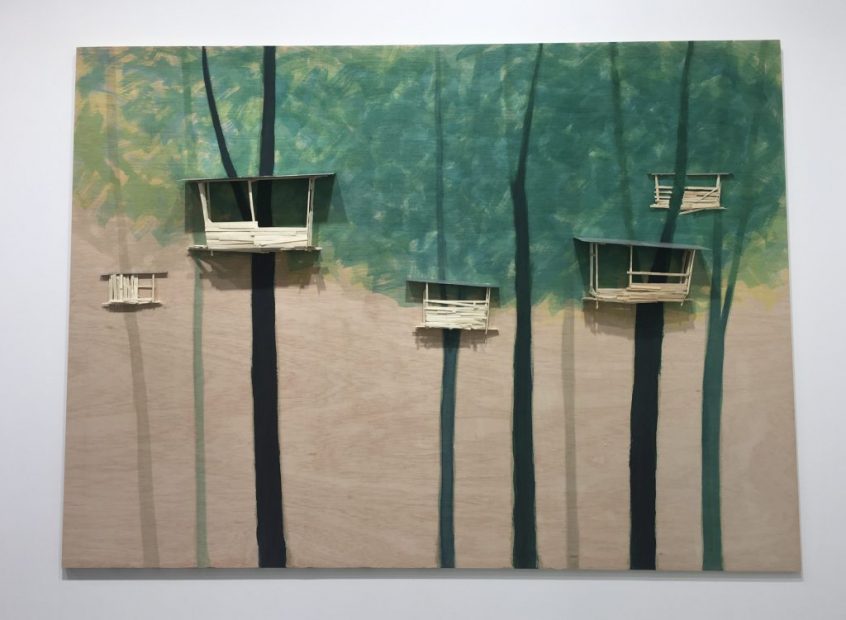 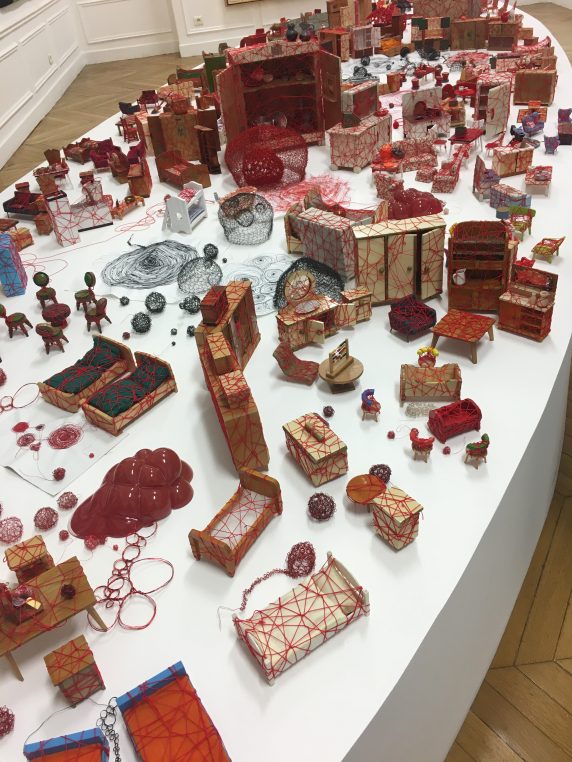 FIAC is every year a moment of gathering for International art lovers in Paris and the new building of Grand Palais Ephémère on the Champs de Mars, proved again its excellence. It was added on with a large tent for young artists and the luxury of  smoking cigarettes or just getting some fresh air in the gardens facing the Eiffel Tower was a bonus. But galleries were very traditional in their choices and I found it quite disappointing. So I escaped to the Champs Elysées where Moderne Art Fair took place for the first time. There were a  few decorative art galleries and the tribute to Bénédicte Pesle moved me very much. But I really went for a French artist from the north, Sébastien Bayet, who creates canvases with patchworks. The fireworks of the week was the opening of the seventh edition of Asia Now, the Asian art fair which celebrated Iran this year. It was pouring rain, the dim sum chef was desperate and had to fold but the atmosphere was electrical and some of the artists exceptional. 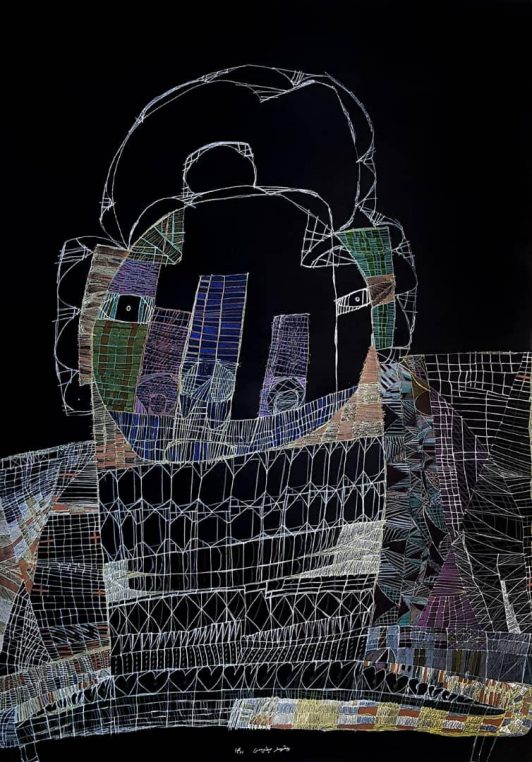 It was hilarious to see Laurent Dassault, who partly owns galerie HdM (Hadrien de Montferrand), asking the girls at the control desk on which floor the gallery was? And no one knew what he was talking about nor who he was. There was a lot of amateurism in the organisation which was quite refreshing and people were totally excited by the new wave of Persian artists. In the courtyard, the galleries from Teheran were showing the best of young contemporary Iranian art with Elham Etemadi‘s very colorful canvases, Mimi Amini‘s collages and mixed media paintings and my favorite, Abbas Nasle Shamloo, who was showing fantastic ink drawings at Sarai Gallery. Mathieu Templon, Daniel’s charming son,  was representing the gallery at what is considered as the young dynamic artfair thanks to its founder and director Alexandra Fain. 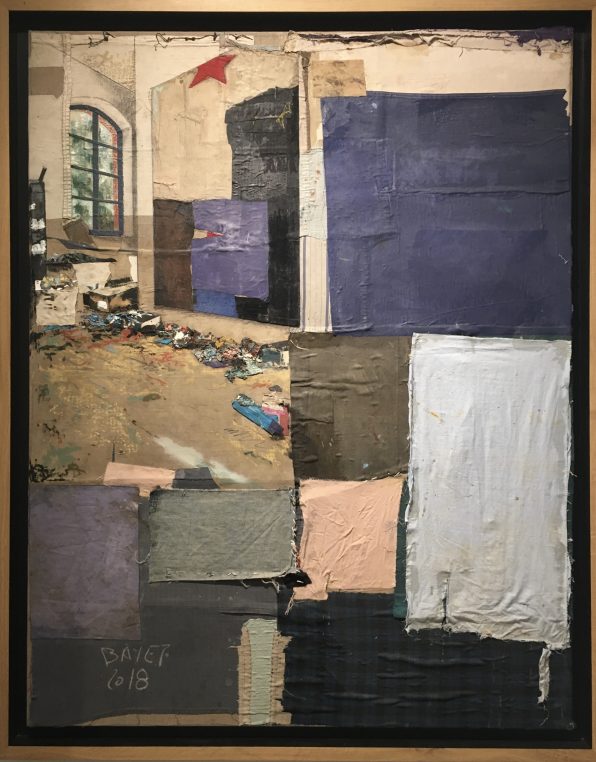 It’s always interesting to walk into new art fairs (ModerneArt Fair) and discover a gem. I knew that Maison Parisienne would be perfectly well staged with Simone Pheulpin’s extraordinary cotton sculptures (soon at MAD) and Pierre Renart’s ribbon furniture but I was surprised to find that Bénédicte Pesle was honored on a small little booth near the champagne bar. She introduced Bob Wilson, Merce Cunningham, Philip Glass and Trisha Brown in Paris and you could not go to a contemporary ballet performance without seeing her until a few weeks before she died in 2018. It was her who convinced the then Minister of culture, Michel Guy, to commission “Einstein on the Beach” which premiered at the Avignon festival on  July 25, 1976. 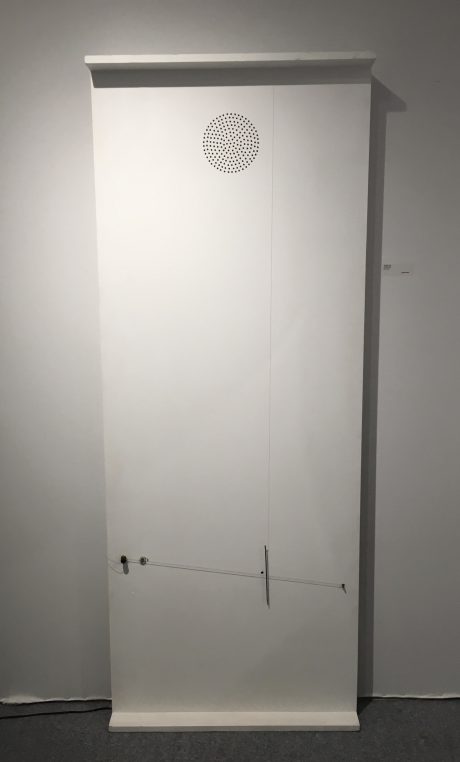 She was John de Menil’s niece (her mother was his sister), and she had worked early on at Alexander Iolas gallery as its director in Paris and thus knew Max Ernst, Nikki de Saint Phalle, Andy Warhol, etc… intimately. The pieces shown here are from her collection which Baudoin Lebon (whom she first helped in 1970 at the gallery) is selling. A gouache by Viallat, a print by Sol Lewitt, a musical wall by Vassilakis Takis, a photo by Mapplethorpe… Suddenly the good times spent at her house with her companion Arlette Marchal, one of the great journalists of l’Express, came back to mind. She had really launched Baudoin Lebon’s career in letting him sell theprints from the gallery. He remembers. 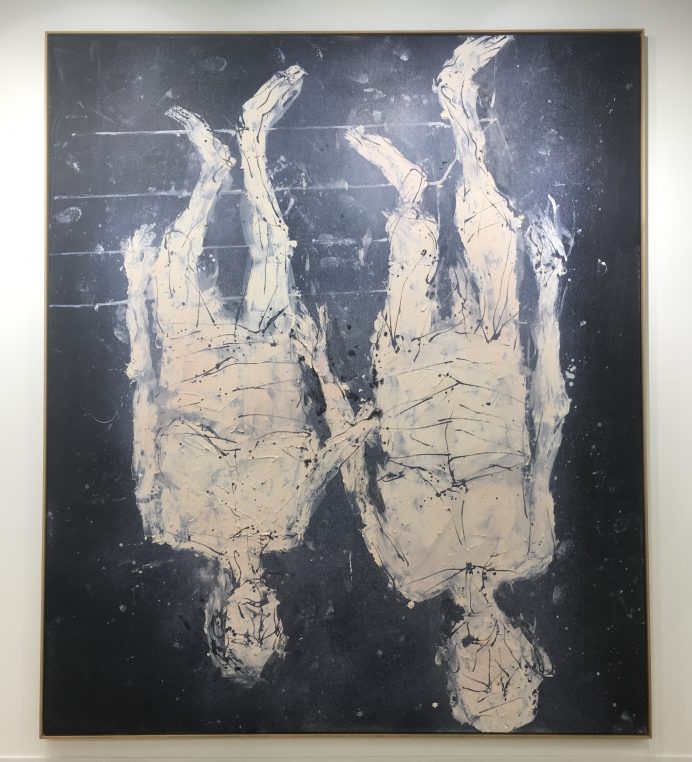 FIAC was the officialisation of all the famous artists of the moment. At Galerìa Guillermo de Osma a superb large drawing by Christo of “The Wall” (Project for a Wrapped Roman Wall, “Porta Pinciana” delle Mura Aureliane- Via Vittorio Veneto and Villa Borghese), and by the same artist, some early 1965 and 1963 “Show window” and “packed supermarket cart” at Annely Juda Fine Art who also showed beautiful works by Tadashi Kawamata, “Tree Hut in Tremblay”. 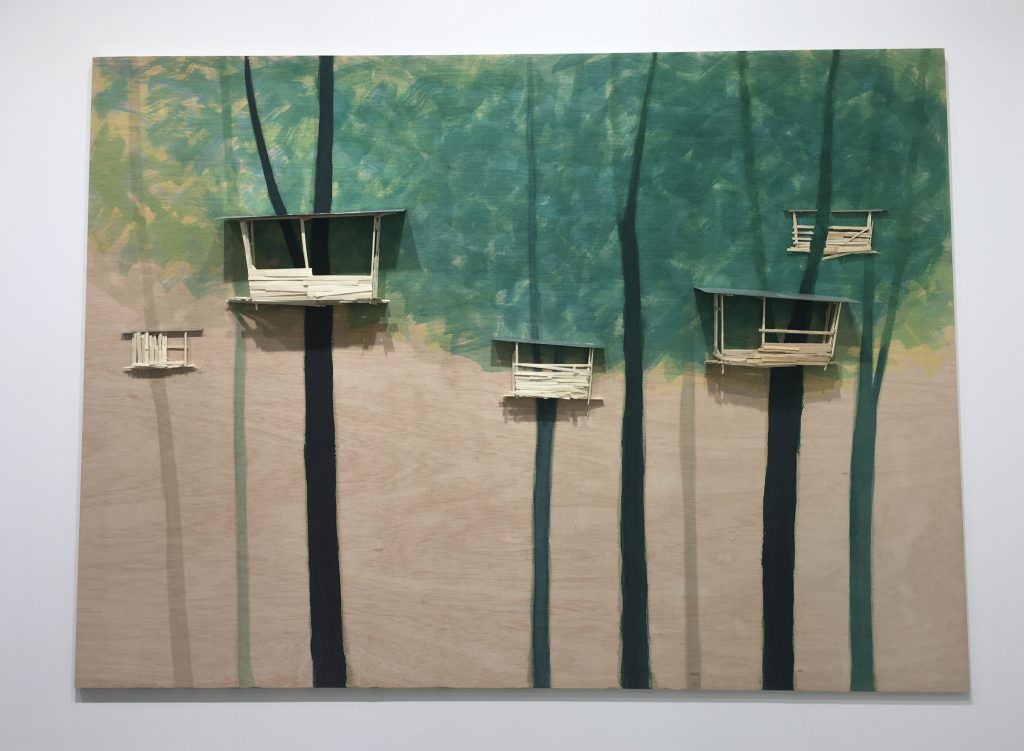 At Lelong, a stunning “Tres draps” by Antoni Tapiès, and a few more at Galerie Zlotowski. At Marian Goodman a large painting by Giuseppe Penone (who is at BnF), at David Zwirner some oil on paper studies by Josef Albers (who is at MAM), two Louise Nevelson a black one at Pace and a white one at Guillermo de Osma. Many Othoniel glass suspensions at Karsten Greve and at Kukje Gallery along his exhibition at Petit Palais. A good surprise was to see pastels by Paula Rego at Victoria Miro, and a beautiful Miquel Barcelo at Thaddaeus Ropac. But nothing new… Anne de Villepoix was showing Joyce Pensato, the Lebanese gallery Marfa had interesting artists such as Omar Fakhoury and Tamara Al Samerraei. 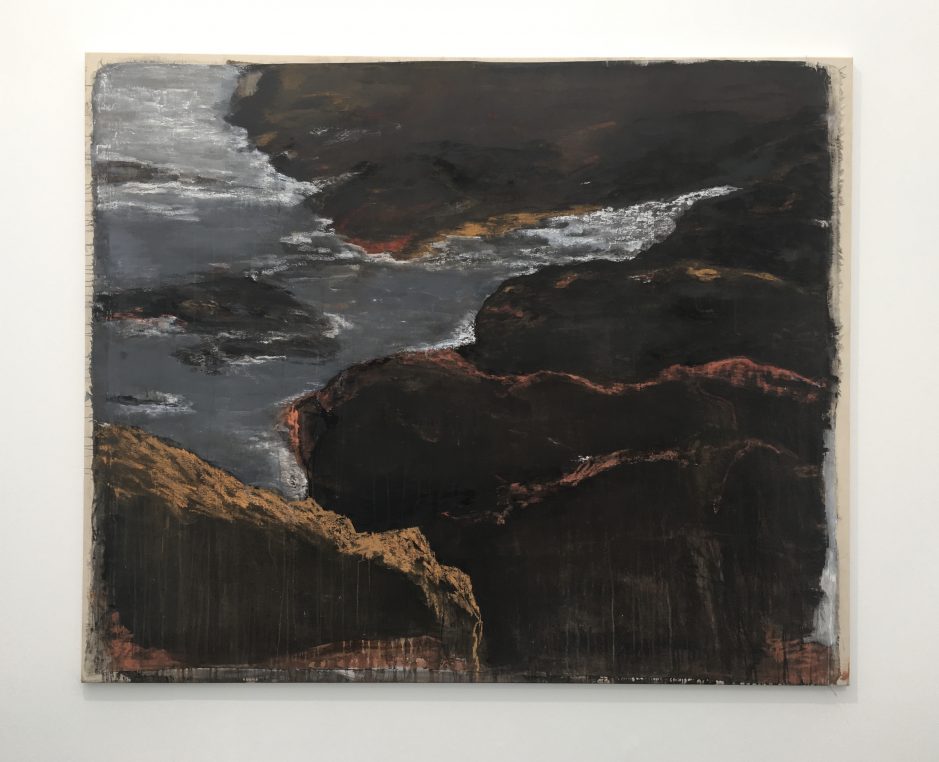 So no great surprises at FIAC even in the young galleries area but a very International atmosphere with all languages being spoken in the alleys and 25 countries represented. Italian, Spanish, German and Dutch, English and American collectors were very excited to be in Paris and there is a general feeling that art is exploding again in our city.

One Comment on “FIAC, Moderne Art Fair and Asia Now, what a race!”